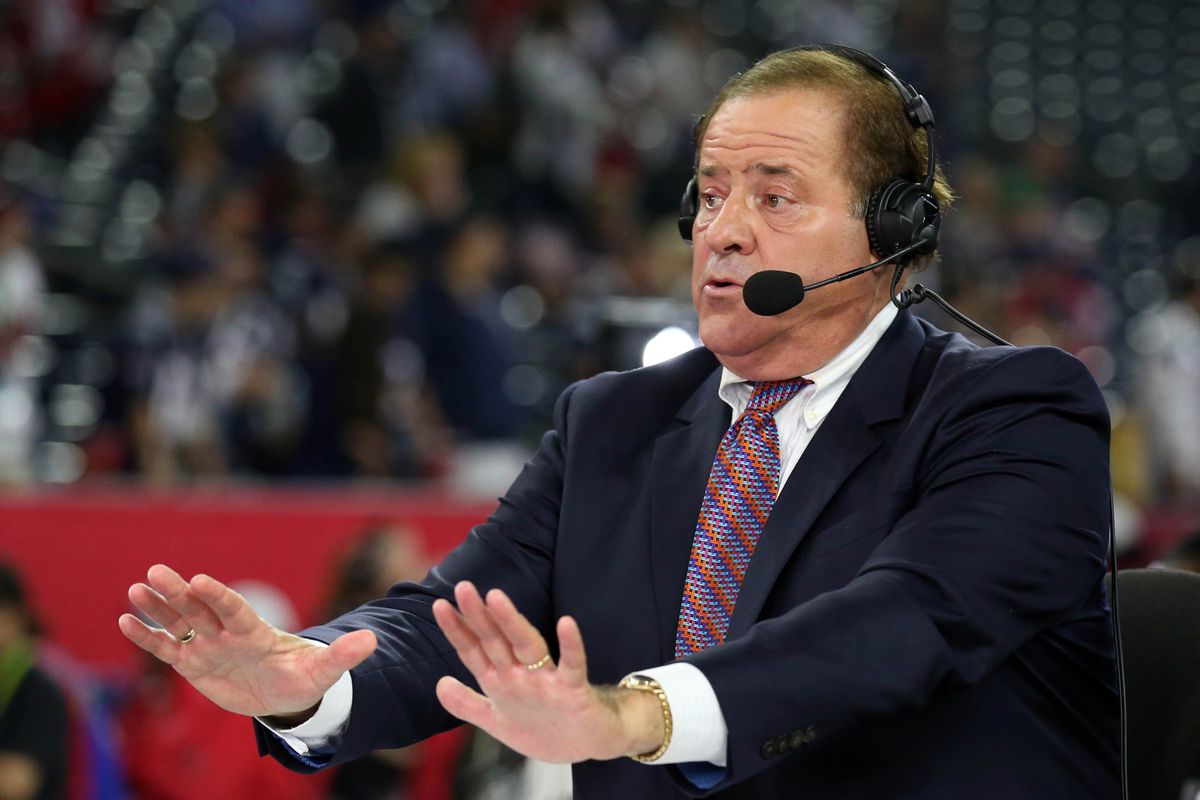 Sitting around this weekend and hearing one indistinguishable voice after another, particularly on an unending Saturday of college football, I made a list of the network voices I’m just plain tired of listening to and seeing.

Then there are those still alive but apparently fully retired. These are the fellows I miss.

A list of 10 annoying network broadcasters in alphabetical order

Chris Berman (ESPN) Had his long turn as a Bristol original. He still pumps out hackneyed and well-worn catch phrases. How many predictable Red Barber and Howard Cosell imitations can he spew before viewers shut the set? Time to relinquish the mic once and for all.

Terry Bradshaw (Fox) Never saw a camera he didn’t like, (left). Comes off like a buffoon in those promos and commercials. Time for Terry to be put out to broadcast pasture.

Joe Davis (Fox) Where do I start? How about a pillow? It’s either Joe, Remeron or Ambien? Time to interrogate his bosses who hired him.

Jim Gray (Showtime) Hard to find him these days. Thank God. Maybe an obscure PPV channel. Will say anything to get his face on camera. No mainstream network will ever hire him again. He’s not worth the trouble.

Howie Long (Fox) When was the last time he said anything of any consequence? Collects his check and laughs all the way to the bank. The staid Fox studio panel needs a new look. Howie looks frightened on the set or disinterested.

Dan Orlovsky (ESPN) If you never heard him, be thankful. This fellow’s delivery is high-octane and shallow in material. He’s another high-drama, make mountains of molehills commentator who won’t stop. Take a chill pill.

Mark Schlereth (Fox) Talks in a halting manner, groping for the next word, while attempting to say little. He was never any good on ESPN and worse on Fox.

John Smoltz (Fox) As the gifted broadcast historian Curst Smith wrote: “You can’t beat fun at the old ballpark,” said Harry Caray. Fun—not dissertation about a cutter, splitter, or fill-in-the-blank–seam curve. By contrast, today many mic men treat the pastime as a pitcher-catcher seminar, a panacea for insomnia.

Maria Taylor (NBC) Sounds to me like a backstabber and rabble-rouser. Unsure, one of the two or both?  Just ask Dave Lamont and Rachel Nichols or others who’ve shared their opinions about her off the record.

Living former network broadcasters who I wish were back behind the mic sounding like they were in their prime — in alphabetical order:

This is a list of those fully retired. (e.g. former network voices still announcing locally, like Brent Musburger or Jon Miller are not included or those retaining some network assignment like Verne Lundquist golf)

Marv Albert (NBC/Turner) Disciple of pioneer basketball voice, Marty Glickman, Marv grew his own flair, first on radio, to Knicks television and to a local New York sports anchor. Basketball and football on the networks followed.

Mike Emrick (Various) With the advent of television in the late 40s and early 50s, radio announcers pared their calls from painting a word picture to captioning what viewers were seeing. Emrick reversed the process doing an NHL radio call brilliantly on network television. He pulled it off.

Tom Hammond  (NBC) Talk about someone who comes quietly, leaves quietly and is nimble enough to do football, basketball, one of the all-time best at horse-racing and according to a few, was the best doing Olympic track and field. 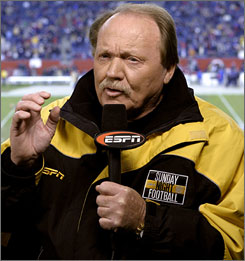 Paul Maguire (NBC, ESPN) Insightful, storyteller and self-deprecating humor, flashbacks to the NFL of the past. Again, why did ESPN force Maguire (left) into retirement? No excuses.

Mike Patrick (ESPN) Never given the credit he earned as an excellent NFL and basketball play-by-player. He was ESPN’s lead NFL voice during the network’s formative years in the 80s and 90s. Gone, good-bye. Never any reason given by the Bristolites.

Tim Ryan (NBC/CBS)  The man could do just about anything and do so warmly. Pleasant timbre. He could have written the book for hockey, efficient on football, superb on NHL, presided over tennis, basketball skiing and belongs in the Boxing Hall of Fame. Can’t ask for much more from one of the most versatile announcers in the annals of network sportscasting.

Vin Scully (NBC/CBS) He’ll be 94 later this month and I would take him now over virtually anyone. Best ever baseball announcer. Would have loved to hear him do football alone. Did golf and tennis poetically and delicately. Broadcasting celebrates its 100th birthday this year and Vin is at the very top of whatever list anyone concocts.

Dick Stockton (CBS/Fox/Turner) Number one voice for CBS’ coverage of the NBA in the 1980s. A first-rate, exemplary network announcer with a dulcet tone. Terrific at baseball, football and basketball. Understated except when presiding over big plays.

Gary Thorne (ESPN/ABC) Booming voice, galvanizing play-by-player and a hearty laugh. Wonderful on radio and a pleasure on television. Why isn’t he still doing baseball and why didn’t ESPN respond to cries for his return to the NHL which he did brilliantly when ESPN had hockey’s rights in the 90s and early 2000s?

John Smoltz may not be the most amusing guy but sometimes he makes a cogent comment. For example, game 6 Re Sox-Astros LCS, 7th inning when it was a still a ballgame at 2-0 Houston, Boston’s Alex Verdugo was cut down trying to steal second on a “strike em out throw em out” double play. Smoltz referred to the old cliche “baseball really is a game of inches” illustrating via the replay that Verdugo was “not ready to run” and that may have contributed to him being thrown out “by inches.”