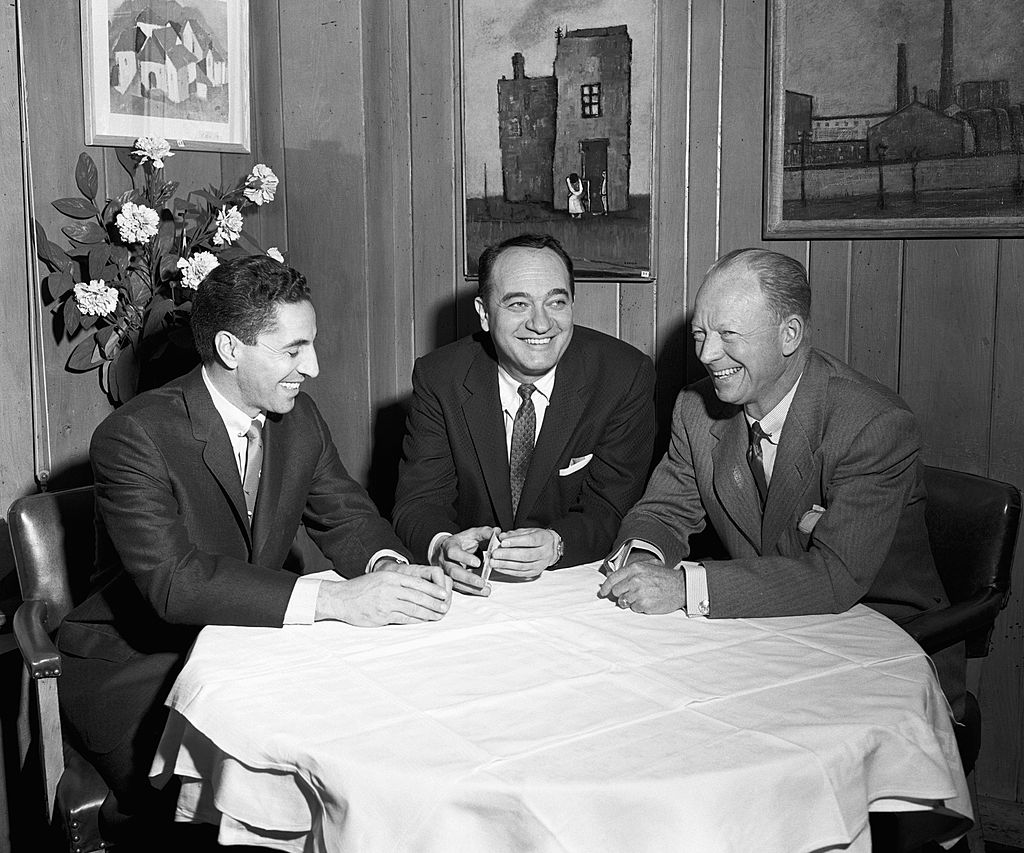 For baseball broadcasting,  you might say that it was a glorious year, one not surpassed since, not by a measure of top to bottom, no matter how you grade each one. It was Mel Allen’s last season with the Yankees.

There might have been some real good ones who’ve come along since (e.g. Jon Miller, Harry Kalas, Bob Costas, Dick Enberg, Marty Brennaman, Denny Matthews, Al Michaels,  Dave Niehaus, Eric Nadel, Joe Castiglione, Pat Hughes and Bob Uecker,  to name a dozen play-by-players off the top of my head) but 55 years ago from a telescopic and historical lens, a single list of such baseball broadcast heavyweights would be almost impossible to match. At least not for my money.

(1) Enshrined in Cooperstown as a player

Network Games of the Week

Mel Allen* Blended a commanding voice, a command of the language, warmth and spot-on timing. “How ‘Bout that!”

Jerry Coleman* “Oh Doctor’ he would bellow liberally, an exclamation made famous by his colleague in the catbird seat

Phil Rizzuto (1)  Holy Cow! Neighborly, friendly and until he became a caricature of himself a solid play-by-player

Chuck Thompson* Ain’t the Beer Cold! No sweeter a voice, no gentler a man. Baltimore’s most famous sportscaster ever

Ernie Harwell*  A lady in the third row from Saginaw has that foul ball. He was as poetic as he was humble

Jimmy Dudley* “The string is out.”  ’64, his first with nemesis Bob Neal, Dudley’s string was out in’67 after 20 seasons

Ray Scott  There was Silent Cal and Dr. Minimalist, known best for football, did Twins baseball too

Ralph Kiner (1) Malaprops were the charm. Remained current to the end, regaled fans with stories from the  trenches

Vin Scully* Baseball, if not sports’ best ever play-by-play announcer. Period. Next!

Jack Brickhouse* “Hey, Hey,” called Cubs and White Sox until the late 60s when he did Cubs only.

Jack Quinlan Died tragically when only 38 the in March ’65 at Spring Training. A stellar broadcaster cut short

By Saam* The Texan was the lead voice of the Phillies.  Earlier did A’s too before they bolted for Kansas City

Bob Prince* “All we need is a bloop and a blast,” the Gunner was as big as they come in the Steel City

Waite Hoyt (1) Hall of Famer and member of ’27 Yankees, had an art for telling stories with his thick New York accent

Gene Elston*  Not very animated, yet the first voice of  Colt 45s who became the Astros in 1965. Gene stayed 25 seasons

Loel Passe This fellow had a little Dizzy Dean to him.

Rene Cardenas   A classic, he mentored Jarrin in LA before moving into Houston booth.

Harry Caray*  “Holy Cow!”  Deified in St. Louis as much then as he would be years later  in Chicago

Jack Buck* Appreciated greatly in St. Louis then, his popularity ballooned after Caray was fired in 1969

There you have it.  Twenty five eventual Frick winners -25 of the 43 Frick Award winners were working in 1964, more than half the total number of winners since the honor was established 41 years ago. The award was established in 1978 when Allen and Barber were recognized together.

You might argue that a year later the talent across the board was equally as good. In 1965, Harry Kalas joined the Astros broadcast team. He would eventually be a Frick winner himself. Allen was shockingly no longer a Yankees announcer but was calling a schedule of games for the Braves. Garagiola was with the Yankees. The Game of the Week package was with ABC and for the first time completely national. The ABC talent included Merle Harmon, Keith Jackson and Chris Schenkel. The ABC package also featured Jackie Robinson who teamed with Jackson. Robinson was the first African-American network baseball announcer.

Wolff was out of baseball, never to return. So the exchange would be Kalas for Wolff. Tough to argue? Also, in’65, due to his tragic death, Quinlan was no longer on this list.

I hear Sinatra singing something about a very good year in the background …. There have been years where more Frick winners were broadcasting, but it’s hard to top when you include the non-Frick winners. I think there might have been more: I think Bill King was still the fill-in on Giants broadcasts, and how’s THAT for a fill-in? Felo Ramirez probably worked the World Series? Other Hall of Fame players who were broadcasting included Pee Wee Reese for CBS and Richie Ashburn for the Phillies. Vince Lloyd was doing Cubs and White Sox TV with Jack Brickhouse, too. I… Read more »

So, in 64, with CBS in bed with the Yankees (and possibly Phillies), who did NBC have contracts with?

IN ’64, NBC had the rest of the league- but couldn’t go into Major league cities- which meant 17 cities were blacked out- Chicago, LA and NY had two teams. So places like Detroit, Cleveland, Washington, Chicago, St. Louis, NY didn’t get out-of-town games…As I understand it/remember, in ’65 ABC had the weekly Saturday rights and was permitted to send its telecasts into MLB cities. But it had to blackout the TV markets of the participating teams. So if ABC showed the Cubs- Cardinals, the two teams could run the games in their owns markets exclusively. In ’65, the Yanks… Read more »