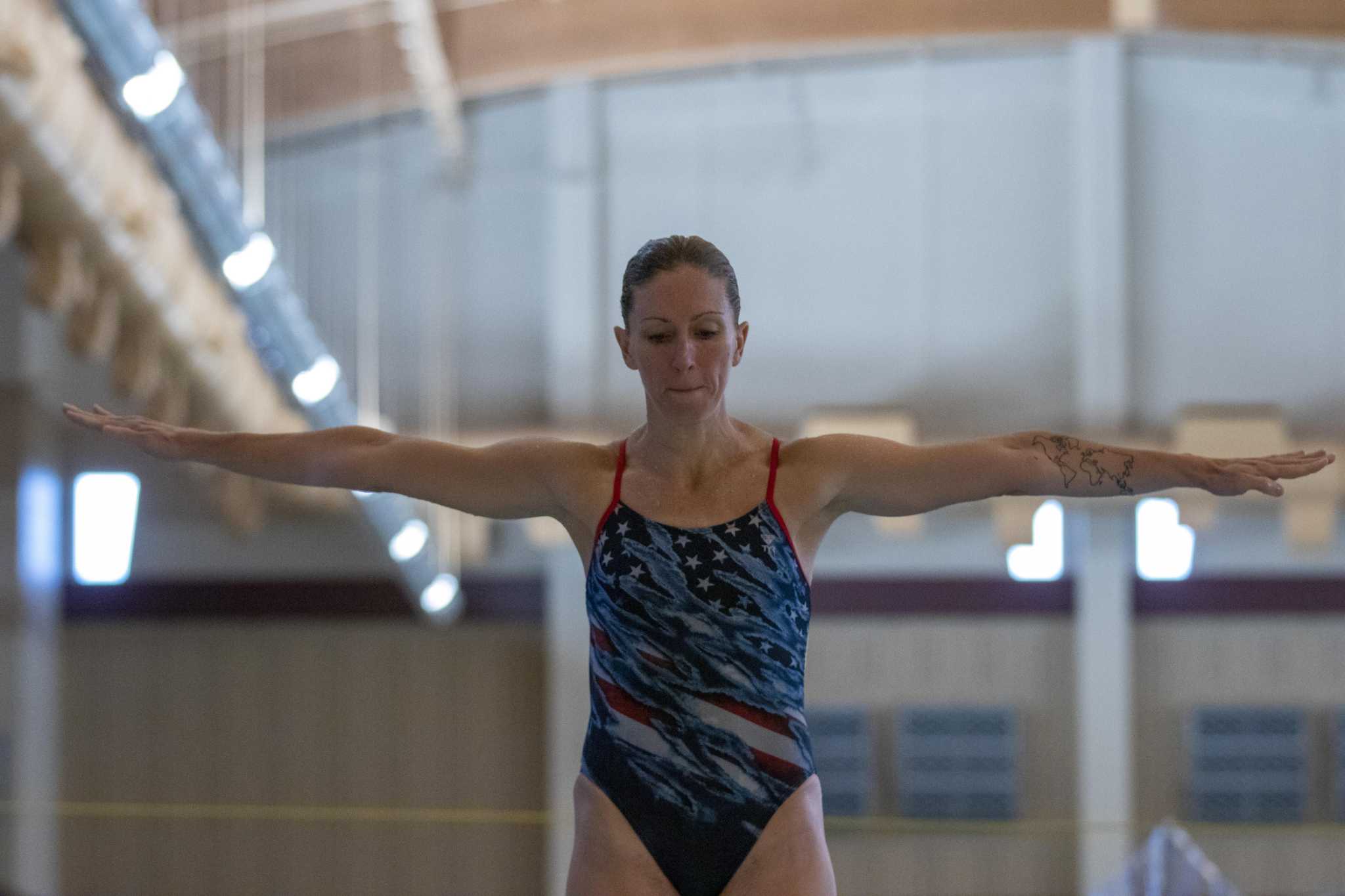 Laura Wilkinson in training for the 2020 Tokyo Olympics which has been postponed until 2021 due to Covid-19. She had worked as a commentator for NBC.

No one saw it coming. It was completely unheard of. To return to the grueling sport of Olympic diving at the age of 42, after enduring a major neck surgery and a decade long hiatus, is unimaginable. But diver Laura Wilkinson has always been one to keep people on their toes.

An icon in the diving world, Laura Wilkinson won her first major international gold medal at the 1998 Goodwill Games. In 2000, Wilkinson won the Olympic Trials and made her first Olympic team.

It was then in Sydney where she built an indelible legacy, demonstrating implausible resilience. Competing on a broken foot and coming from behind, Laura defied the odds, earning gold in Australia. She is the first woman in history to win all three coveted world titles in platform diving, Olympic (2000), World Championship (2005) and World Cup (2004).

Laura is the only American woman to win Olympic gold in diving in 56 years.(Lesley Bush, 1964)

With history in her pocket, the diving legend made the decision to take a break from the sport in 2008 and pursue her other dream of starting a family.

But Wilkinson clearly couldn’t get enough of the sport.

She became a broadcaster covering the 2012 Olympic Trials, then interviewing athletes competing in other events in London at the 2012 Games. In Rio in 2016, she served as an on the deck analyst for NBC. But after years of being on the sidelines, Wilkinson yearned for more. A year after Rio, she began her diving comeback, and has since been working to pursue her fourth Games in Tokyo. Now, after twelve years of retirement, surgeries, and four kids, Wilkinson is back to remind the world of her strength against all odds.

As a Big Ten collegiate diver myself, Laura Wilkinson has always been a source of inspiration for me. I first came to know her name at the start of my diving career at age eleven. She was the role model of every young, ambitious diver at the time, and her perseverance encouraged me to become the competitive athlete that I am today. Working as a sports journalism intern, it was only necessary that I cover my own beloved sport, and use my platform to shed light on the often unseen sport of diving. It has been an honor to have had the chance to combine my love for the sport with my academic aspirations as a journalist and to have had the opportunity to interview an athlete of such importance in my own life.

We interacted as she continues to chase the impossible in 2021.

Before we get to your comeback prep for Tokyo, tell us what it was like to make the transition from the diving board to broadcaster.

While I was still competing, I had the opportunity to interview a few athletes and sit in on a few events to add some perspective. So getting to dip my toe in and dabble a bit certainly helped ease the way into this new arena.

The first few full events I had the chance to cover were voice-overs from a remote location. This gave me a little more understanding, knowledge and feel for what I needed to do and the general rhythm for how an event runs from the booth versus the board.

In 2012, I sat in the booth for the preliminary rounds of the Olympic Trials which were aired live. So this was exciting and nerve wracking. I did my first on cameras there and was so thankful to have veteran play-by-play announcer Ted Robinson lead me through that event! He made it seem easy and we had a lot of fun.

Later that same summer at the London Olympic Games, I did something totally out of my wheelhouse and was doing stand-ups around the city along with interviewing competing Olympians from several different sports along with their mothers.

At the 2016 Olympic Trials and Olympic Games, I was able to try out another different angle of the broadcast. I was on the deck adding color and video analysis during the events, as well as interviewing athletes and coaches.

It’s been a lot of fun to try out so many different angles of the broadcast, and my hope is that it adds depth, wisdom and character to my future broadcasts.

When you were on-air, did you focus your commentary on diving’s finer points, to please those who follow the sport closely or did you serve those with only a passing interest in diving, watching the Olympics?

I think it’s a bit of both, but first you need to be able to welcome in and gently introduce the new audience to the sport. So there is a delicate balance of covering the basic rules, criteria and nuance to the general public while adding the depth of knowledge and insight that experts want in such a way that all can follow along.

Cynthia Potter has been around broadcast diving a long time. Did you lean on her for tips and instruction?

Yes, definitely! I’ve known Cynthia since my early diving days and have always heard and watched her cover diving. She’s been so gracious to help guide me and teach me along the way. We were together a lot in 2016, and I am so grateful for all the stories she shared, the fun debates we had and the friendship that has developed as well.

What made you want to leave the comfort of broadcasting, knowing too that you have four young kids at home, to have another shot at Olympic gold?

For me broadcasting has only been an occasional gig. I thoroughly enjoy it, but it’s not my fulltime job. So returning to training while being a fulltime mom was the tougher challenge!

Do you plan to return to broadcasting no matter the outcome of 2021?

I would love to stay connected to the sport, and I think broadcasting is a fun way to do just that. So yes, I hope to return to broadcasting after 2021.

Compare your nerves going into this next Olympic season vs. those leading up to your first Olympic Trials and Games debut in 2000 when you won the gold?

It’s similar because I’m in very uncharted waters. I’m an underdog without much competition under my belt and I think I’m very much under the radar right now.

It’s different because I have a lifetime of experience and wisdom that I can pull from now that I didn’t have then.

The key for me is learning to mesh the best of both of those aspects together to keep my head in the right place and come out ready for battle.

How has the yearlong delay due to Covid-19 affected your peer athletes and your own training?

It’s affected the entire world. There’s likely not been a single athlete not directly affected by this. But the beauty is that it gives us common ground. While we might still be competitors, it’s an opportunity for people to come together through sport, and cheer each other on, work together and come back for a strong 2021 season.

Many of my athlete peers have never had to be out of the pool for an extended time. On the other hand, I’ve had a nine year retirement, a recent neck fusion that took a year to recover from and a myriad of other injuries. Being sidelined used to scare me until I learned how to use that time wisely. I’m trying my best to teach others how to do that during this time.

After turning in the towel (or should I say “shammy”), could you have imagined you would return again for another chance at an Olympic medal?

Honestly I don’t think I would have been that surprised. Maybe at the timing of it, but not the return. I didn’t retire in 2008 because I didn’t want to dive any more. I retired because I wanted to be a mom. There was always a small hope in the back of my mind that one day I’d get to fly off that platform again.

Leading up to the 2000 Olympic Trials, you suffered a badly broken foot, forcing you to alter the way you prepared for Trials. Despite all odds, you won Trials and proceeded to make history winning gold in the Women’s Platform Diving event in Sydney, Australia. How is the obstacle of returning to competition at 42, similar to this setback you faced in 2000?

It actually has some similarities which is unnerving and comforting all at the same time! You would think returning to competitive platform diving in my forties would be enough of a challenge, but we discovered in late 2018 that I had degenerated cervical discs causing major nerves issues and weakness in my arm. I was told that not just to dive again but to simply be a healthy mom with fear of paralysis, I needed to have an anterior cervical discectomy and fusion (ACDF).

There were many unknowns in that I don’t know any divers to return to platform after that procedure, let alone at my age. But it was my only option and needed to be done to be a healthy, functioning mom for my kids.

I was able to use an Orthofix bone stimulator which I believe helped speed up my healing process. I was all in on physical therapy to get my range of motion and strength back. And since I knew I would be out of training for quite a while, I took the lessons I learned from 2000 and other successful seasons and began to work on my mental game.

It took me a full year to get back up on the platform, but I was competing once again when COVID-19 changed things. I’m thankful for an extra year to continue to heal, gain strength and return to full confidence.

When I look back at 2000, I’m pretty sure I would have made the Olympic Team if I had not broken my foot, but I’m certain I would NOT have won the gold. It was breaking my foot and being forced down a different path that enabled me to grow stronger mentally and ultimately stand on top of the podium.

So when I go through a crazy, hard season like this it only makes me smile because I know it’s going to make me better than I was before.