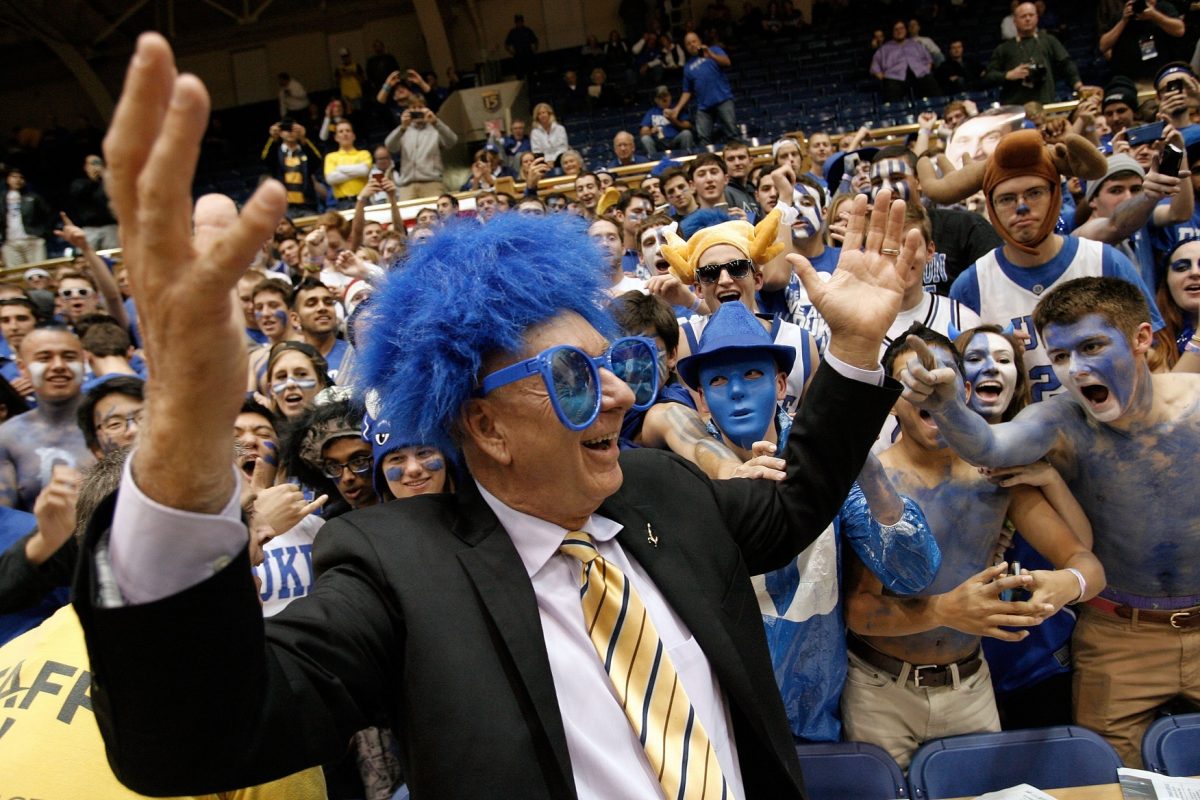 Forty-two seasons after starting at ESPN, the colorful, uber-enthusiastic broadcaster from Jersey is still equally dynamic and tireless.

Even at 81 years young, the Hall of Famer Dick Vitale continues to bring vigor to college basketball telecasts. Still inspired by his natural passion and energy, Dickie V doesn’t plan on calling it quits any time soon. He was the early face of the network in the early 1980s when the Bristolites had little play-by-play other than college basketball.

“I don’t feel 81, I don’t feel it. The kids treat me like royalty, and I’m just gonna go as long as I can do it,” Vitale said. He says that years ago ESPN promised him a lifetime contract.

The former coach of the University of Detroit and later the NBA’s Pistons joined ESPN in 1979. At the time, ESPN was an embryo, the brainchild of Bill Rasmussen. But no one gave the all-sports network a chance to survive.

National cable was a new concept. ESPN trudged on-air on a financial shoestring in September, 1979 and CNN did so behind Ted Turner the following June. Legacy networks ABC, CBS and NBC dominated national sports programming. ESPN faced a road filled with obstacles.

It didn’t have the money, reputation or distribution to acquire rights to the NFL or Major League Baseball. College basketball though had no weeknight options. CBS, NBC and ABC ran games on weekends and only during the day. So college hoops filled ESPN’s schedule. Vitale, a larger than life personality, gave the network and the sport an upbeat identity. The network for instance gave the relatively new Big East tons of coverage in the 80s and propelled the conference’s growth.

On December 5, 1979, Vitale called his first game, one of ESPN’s inaugural college basketball broadcasts, a 90-77 victory by powerhouse DePaul over Wisconsin. Through the decades, Vitale would arguably grow into college basketball’s most famous color commentator, an icon among fans of the sport.

Right from the start, Vitale magically transformed his enthusiasm for the game to audiences at home. His fabled phrases caught on. A heralded freshman was a “Diaper dandy,” a team’s best player was a “Prime time performer” and players who excelled but had occasional poor performances were “Dow Jonesers.”

While Vitale has called the biggest games across the country year-in and year-out, one thing that he could never have imagined is broadcasting games during a global pandemic. With strict guidelines enforced, many play-by-play announcers and their partners work remotely and separately from their partners. So Vitale has noticed some broadcast challenges brought forth by COVID-19. “It’s a different and unique situation,” Vitale said last week. “I always like to be right next to my broadcast partner. You can read when he’s going to come in. You can read what he’s thinking. To be honest with you, working at a social distance had me a nervous wreck, thinking about how the timing will be when you’re not at the same location.”

For instance when he recently teamed up with Dan Shulman (left), ESPN’s lead college basketball play-by-play announcer, the two were hundreds of miles apart in their own homes, Shulman in Canada and Dick in Florida.

So Vitale wasn’t able to non-verbally communicate with his partner during the broadcast. Working virtually, he couldn’t gesture to his play-by-play partner.

“The guys will tell you, I’m known for hitting them on their elbows when I want to say something and then they know to get me in, to ask me a question or something,” Vitale said. “Well, you miss all that, there’s no question. But the bottom line is you make the most of it and get through it.”

In addition to the highly regarded Shulman, Vitale has worked with some of the biggest play-by-play names, voices like Mike Patrick, Tim Brando, Jim Simpson, Keith Jackson and Brent Musburger. He even worked one game with Al Michaels, a PAC-10 Championship game on ABC in 1989.

The pandemic has also forced restrictions on in-game attendance for fans. Most of all, the loss of a homecourt advantage hurts storied programs that rely on boisterous crowd support during critical junctures. Evident in Duke’s consecutive losses at home and Kentucky’s shocking loss to Richmond at Rupp Arena, blue-blood programs dearly miss their loyal home fans. Vitale sees the top programs being impacted the most by not having fans in attendance.

“Those teams, for years have received such an unbelievable lift—mentally and emotionally. The adrenaline from the crowd at key moments in a game doesn’t exist,” Vitale added. “So that’s negated in a big way.”

Another obstacle of COVID-19 is dealing with cancellations/postponements due to outbreaks. For instance, the cancellations impacted the Big Ten/ACC challenge as three games were canceled due to COVID-19 concerns. While it is frustrating for players and fans, Vitale wishes that everyone puts the country’s larger problems first before basketball.

While everyone is concerned about the pandemic, we hope to see Vitale back interacting with fans soon. Through the years, when Dick walked through arenas he was often greeted thunderously, but now in these unprecedented times, he misses the overflowing love he usually gets from fans.

“I wonder if ever in my life I will get to experience walking into an arena and getting back into the crowd with all of the fans. And I love it. To me that mentally gets me in the mood for a telecast. The emotion, I mean we’re dealing without all that now, but at least we have basketball,” Vitale said.

Good job by Will Whitmore! I’m reminded of the story of how John Madden was always grabbing his partner’s arm and even punching it, being the ebullient fellow he is, and once he noticed that Pat Summerall switched sides with him each week. Madden asked why and Summerall rolled up his sleeve to show the bruises!