Bill Mazer spent much of the twilight of his career at WEVD Radio, presiding over a general talk show.

Bill Mazer was born in the Ukraine on November 2, 1920. He came to this country before his first birthday, grew up in New York and then headed off to the University of Michigan.

Like many aspiring announcers of his day, Mazer idolized Ted Husing, America’s first sports announcer who gave football its vernacular a few years after radio was born in 1920.

Mazer would use his rich timbre when talking reverentially of the pioneer broadcaster, “Husing’s pattern of speaking was what you would hear in a Broadway theater. Each syllable of every word he uttered was perfectly pronounced.” Bill would go on to imitate Husing, “On a windswept afternoon in Ann Arbor…”

Bill started in radio in Grand Rapids at WOOD where her followed the iconic Mike Wallace. Yes, Chris’ dad. In a short period of time, Mazer was drafted into the military.

After the war, there was a sports opening at a Buffalo radio station and the renowned Marty Glickman recommended Mazer. So from 1947 to 1964, Mazer dominated sports in Western New York, doing just about everything, anchoring sports on television news, voicing Minor League Baseball and calling college basketball games of the Little Three, Canisius, St. Bonaventure and Niagara. Doing so, he developed into somewhat of an institution.

There were signs all over Buffalo on billboards and buses: “Tune in the Little Three with Mr. Basketball, Bill Mazer.” On a trip to Buffalo, Glickman saw the ad and kidded Mazer, “I wonder what Nat Holman would think,” referring to the esteemed coach of CCNY, whose contribution to basketball was so enormous that scribes dubbed him, ‘Mr. Basketball.’

New York’s WNBC Radio at 660 on the AM dial had a powerhouse of a signal. It was planning an afternoon sports radio program that would feature two-way talk, something never done in New York, certainly for sports. A consultant named Mike Joseph recommended to WNBC that it hire Mazer to host the show. So Bill left Buffalo and came back to the big city in which he was raised.

The show wasn’t contentious and the two way talk wasn’t argumentative. It attracted younger kids who’d rush home from school and listen to Mazer share his vast knowledge. Remember, this is before cable TV and even FM radio. There was little competition. Bill became a hit with sports fans and his career expanded.

His stentorian and warmth would permeate New York’s airwaves on both radio and television for some four decades.

On the radio show, Mazer challenged callers to stump him. But they rarely did. So the prizes for the contestants piled up in the closet. One day, the manager of the station told him to take a dive for the good of the sponsors.

Earlier, in 1954, while Mazer was still in Buffalo, the Brooklyn Dodgers had an opening when Red Barber made the eyepopping move to the Yankees. At that point, Vin Scully and Connie Desmond were the two broadcasters. But with every home game on television, the Dodgers needed three voices.

In those years, the key sponsor, Schaefer Beer, and its ad agency had quite a say in who called the games. Mazer was asked to apply and he met with John Johns of the ad agency BBD&O. Johns told him he didn’t want anyone breathing down young Scully’s throat. Bill told Johns, “No one has to protect Vin Scully.”

Through Desmond, a good person whose career was ruined by alcohol, Mazer met with Walter O’Malley, Brooklyn’s owner. The boss asked Bill, “What kind of name is Mazer?” Bill responded, “Do you mean what is my nationality? I am a Russian Jew.”

Sensing perhaps that Mazer was a bit defensive, O’Malley said to him, “Jewish people are very critical of their own.” The Dodgers ended up hiring Andre Baruch, himself a Jew, but he lasted only one difficult season.

Mazer had an appetite for sports trivia and earned his moniker on and off the air as ‘The Amazin’. He’s most remembered for serving as the sports anchor on the 10 O’clock Channel 5 news. Local sports anchors were huge then. This was before ESPN and certainly Smartphones. On the show, Bill would regularly be tested for his knowledge of trivia and he was tough to stump. 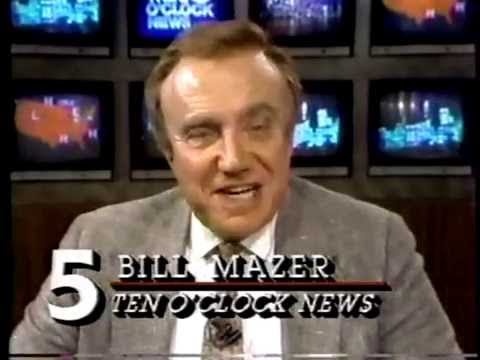 Mazer also anchored the popular television Sunday SportsExtra, a show that summarized the week’s sports news and included interesting features. Later, in the early years of WFAN Radio, Mazer hosted an interview program and in the twilight of his career, he was the morning man on WEVD Radio where he did a general interest show that covered news, politics and features.

Mazer could be quite creative. One night in Chicago when he did color on Rangers’ telecasts, Bill was down on the ice holding a mic. He was ready to interview the Hawks’ star of the game, Stan Mikita. But coach Billy Reay wouldn’t let Mikita come out onto the ice. At that point, Bill used ingenuity.

He did a make-believe interview with Mikita, asking himself questions and answering them the way he anticipated Stan would. “So Stan, how did your line play tonight?” Mazer would then move the stick mic away from his own mouth and tilt it to a make-believe man whose answers he impersonated. “Well Bill, I thought we…” It was humorous.

Mazer’s work wasn’t only confined to local broadcasting. He did some football, hockey and golf for CBS, both play-by-play and color commentary. Mazer was also seen on national game shows, filling in for Hugh Downs on Concentration and hosting the short-lived, Reach for the Stars.

With his great set of pipes Mazer did commercial voice-over work for companies like Ford, Kodak and Trident gum.

First three in the 2020 series of broadcasters reaching 100:

Third in a series; Announcers born 100 years ago: Bob Ufer, the indelible voice of Michigan football

Last will be broadcaster Bob Wolff

I have warm memories of Mazer. I came to NYC in 1988 to go to grad school, which meant a lot of time sitting in my room reading. I listened to him regularly on WFAN, when he hosted from Mickey Mantle’s restaurant (Granting Mantle’s issues, I always loved Don Imus’s line for a contest, that if you can guess which table Mickey wakes up under, you win a two-week trip to St. Louis to visit Bob Costas). I remember smart, interesting interviews, and whenever someone mentioned Husing, he would do, “Good afternoon, everyone, everywhere.” How the world might have been… Read more »

When I came home from school, I was one of those who made it a point to listen to Bill’s WNBC radio program weekday afternoons. I recall fondly when he would announce the “Challenge Round” where you could try to stump him and in turn he would ask the caller to answer a question he posed. Mid 60s WNBC broadcast the Knicks, I think Saturday night games, called by Bill. He did the games differently than the prototypical booming, excited play-by-play man. He was very conversational, like having a friend at the game. When he did a commercial you could… Read more »