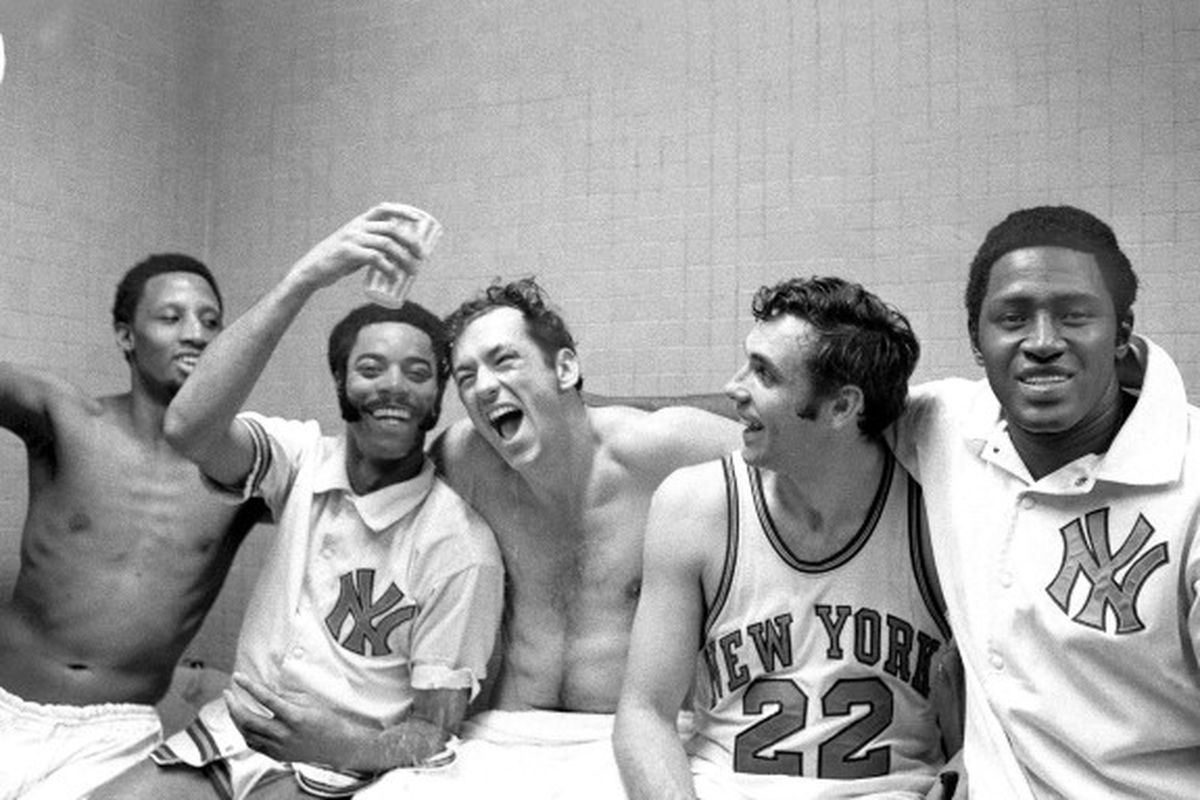 UPDATE: On February 28th, Marv Albert confirmed to the New York Post that he was not invited to the 50 year celebration of the New York Knicks first championship in 1970. It will be held on March 21st.

This is about the past, Marv Albert’s decades of achievement. It’s about how he fueled interest in basketball, particularly in New York.

Madison Square Garden is likely to celebrate the 50th anniversary of the Knicks’ first championship at some point in March. Management will honor the 1970 team that captured the hearts of New Yorkers and put the NBA on the city’s map.

Yes, it’s been half a century since the quintet of Willis Reed, Walt Frazier, Dave DeBussschere, Bill Bradley and Dick Barnett led the club to the world title. Other than DeBusschere, these starters are all alive.

If indeed there’s a ceremony, nothing has been officially announced, will Marv be invited? Remember, he was let go by the club in 2004. And the same owner then, Jim Dolan, is the owner now.

This is not about being trapped in memories. It’s about doing the right thing. From the very beginning, Marv gave Knicks’ fans a jolt through his energetic and rhythmic broadcasts. This is not about whether he still merits Turner’s lead role on the NBA. It is about his body of work. Call it 57 years, starting with the time he subbed for Marty Glickman on a Knicks broadcast in 1963.

When looking at broadcast sports through a New York historical lens, it’s inarguable. Albert is among the five most popular all-time voices. The other four include Glickman, Marv’s mentor,  who spanned a couple generations, first with the Knicks and later with the football Giants and Jets, the Mets’ Bob Murphy whose crisp and emotional Mets broadcasts extended forty years, Red Barber who was the first New York announcer to give baseball a language on radio and the Yanks’ Mel Allen.

The baseball world was indeed stunned when Allen was fired by the Bronxites after the 1964 season. But when CBS bought the team from Dan Topping and Del Webb in 1965, Mel was invited to return to host the always emotional Old Timers’ Day festivities. For many years, fans showered Mel with love when he was introduced as master of ceremonies by public address announcer Bob Sheppard

Allen’s big hearty voice represented championships and New York summers. Everyone seemed to be a baseball fan in the nifty 50s. Like the Yankees or hate them, Allen’s voice resonated. He painted golden and mellifluous pictures on radio and television. With all his network TV visibility, Mel might have been America’s most popular announcer in the Ike days.

It’s interesting to note that all five esteemed voices were at one point or another unceremoniously dropped, demoted or left unprotected. Murphy was crestfallen when he was taken off television and used exclusively on radio beginning in 1982. Oddly, it helped his popularity. Murphy was especially good on radio.

Glickman was the Voice of the football Giants in their championship years when home games were blacked out. The Giants though didn’t put up a sufficient fight to keep him in 1973 when management of the radio station for which he worked didn’t match an offer by the Jets’ station to usurp him. Barber wasn’t renewed by the Dodgers in 1953 and was fired by the Yankees in 1966.

Back to Marv, he became the team’s official voice in 1967. But 37 years later, James Dolan, the Garden’s boss didn’t renew him. Dolan didn’t want to pay him the real big bucks, which were significantly more than the Lakers’ Chick Hearn, an icon in Southern California. Word too was that Dolan didn’t appreciate the fact that Marv was critical of the ball club.

In 1970, the year after the Mets and Jets ruled the baseball and football worlds, pro basketball was a constant subject of conversation on the New York streets. No sports talk radio yet, no cell phones, cable was hardly an embryo and games were still very much followed on radio.

The city’s fans in those days knew the names of the team’s starting five like the back of their hands, out of a deep sleep at three in the morning. Many too knew the name Marv Albert, the Knicks’ radio man.

Home games were essentially unavailable on television, other than for a few thousand cable subscribers in Manhattan. Kids did their homework listening to Marv and were pumped by his patented “Yesss!”

The late John Andariese, Marv’s longtime color commentator on radio and later on television, told me that Marv’s best medium was radio. It’s where he made his mark. Marv was indeed the Knicks when radio still meant something.

For Jim Dolan, let bygones be bygones. What was, was! Dolan should do the smart thing and salute Albert the night that the Knicks ’70 team is honored. Jim should remember Marv’s contribution. He grew up in New York and was 15 when the Knicks won their first championship.

There isn’t much to celebrate on the Knicks’ floor these days. The 1970 team was unforgettable. Savor the moment of the 50th anniversary. Don’t blight it with bad days of the past.

For many, May 8th 1970 triggers goosebumps. Game seven of the title series. The city was on edge all day. The Lakers were led by two of the greatest, Jerry West and Wilt Chamberlain. The Knicks were known for their defense and finding the open man on offense. Their big man, Willis Reed would have to play for the Knicks to have a fighting chance. But he was hobbling. Prior to the game, the packed house at the Garden kept their eyes focused on the tunnel leading to the court. When Reed came out, the 18,000 or so fans there, roared their approval.

Most listened at home to every word Marv uttered. He had no color man. He worked alone, calling the game with the flair that has characterized his work all these years.

The Knicks would win it again in 1973 but nothing since. That’s 47 years ago. There’s not a ton to celebrate. Do it inclusively. Marv would go on to influence so many budding broadcasters tuned in that spring night.

Marv should be asked to serve as  master of ceremonies and management should hang a banner in his name from the Garden’s famous fan shaped roof. They shouldn’t harp, dwell and agonize. Just do it.

Chick Hearn, Johnny Most of the Celtics, Al McCoy of the Suns and a few others have all had their names put up in bright lights in the buildings they helped popularize. Marv deserves the same.

Marv will be 80 next year. His career is nearing an end. If the Garden doesn’t bring him back, it would be shameful. Why cut your nose to spite your face?

Marv was the connection between fans, the team and players for decades. To ignore him is a slap across the face to all those who listened to him in his and the team’s hey day.

For the first time, TNT’s exclusive presentation of the NBA All-Star Game will include commercial-free coverage coinciding with the NBA’s newly formatted, untimed fourth quarter on Sunday, Feb. 16.

The NBA announced a number of changes to this year’s NBA All-Star Game, which airs live on Sunday at 8 p.m. ET. It will include a new fourth quarter format that will honor the late Kobe Bryant, who earned 18 NBA All-Star selections and a record-tying four NBA All-Star Game MVP awards.

Additional special elements during TNT’s NBA All-Star Game presentation will include a Los Angeles Lakers-themed tribute to Bryant within the virtual shot clock – displaying a combination of gold and purple accents at 24 seconds and eight seconds remaining on the clock during the fourth quarter, representing Bryant’s jersey numbers.

On Sunday, Team Giannis and Team LeBron will compete to win each of the first three quarters, all of which will start with the score of 0-0 and will be 12 minutes long.  At the beginning of the fourth quarter, the game clock will be turned off and a Final Target Score will be set.

And yes, Marv will call the game. The first ASG he did was in 1968 for the Armed Forces Radio Network. And yes, it was at Madison Square Garden. Yes, in the Old Garden, where Marv’s career started. The new building opened a couple weeks later.

As a kid I used to take the transistor radio into the bathroom when showering to listen to Marv do Knicks & Rangers. I tried to shower between periods or at halftime but wasn’t always available) With Detestable Dolan in charge, if he isn’t invited back, Marv should wear that rejection as a badge of honor. #stupidtyrantwithsmallshmekel

Marc belongs. If Dolan doesn’t invite him, he cements his image as a petty and small.man.

First, they definitely should have Marv there. There’s also another way to look at this. In 2004, the Dodgers fired Ross Porter after 28 years with the team. Lon Rosen, who was working for Phony Frank McCourt, made the decision, and as I recall, Ross found out from his agent, and not a word was said to him. He did not set foot in Dodger Stadium again during McCourt’s regime, except one night when his dear friend Don Drysdale’s daughter Drew sang at a game and Ann Meyers Drysdale asked him to come. He went, and he left right afterward.… Read more »