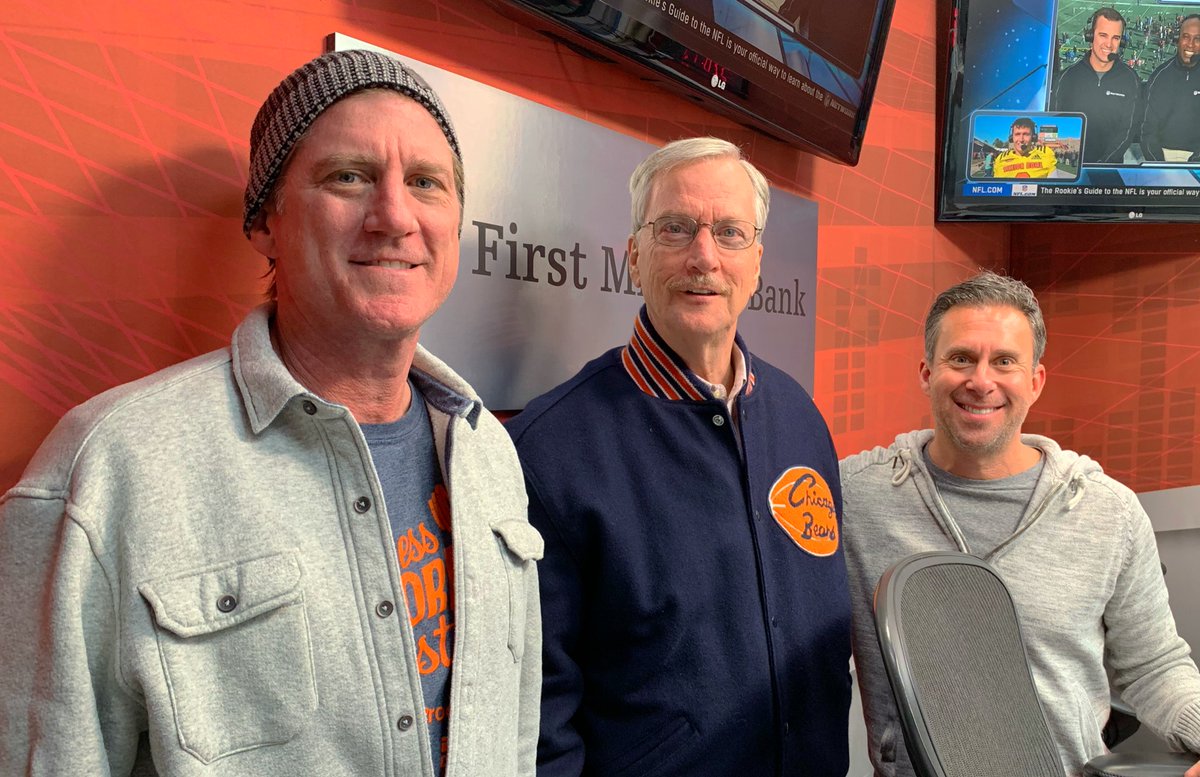 During a punishing sub-zero Midwest winter, the word beachfront conjures a comforting and idyllic setting. But for most, the beach is out of reach.

Yet in Chicago, beachfront property is weatherproof. It suggests the heart of a vibrant downtown; the Magnificent Mile; stimulating, posh and exclusive. There’s a history, a sense of an invigorating community and healthy foot traffic.

ESPN1000 recently invested in a popular downtown location, constructing a state-of-the-art studio on State Street; dubbed famously by Sinatra as a great street. The studio sits saliently on the ground floor amidst the grand skyline towering over Carl Sandburg’s “City of Broad Shoulders.”

The broadcast studio is right in the thick of town, visible to pedestrians in a bustling city of rabid sports fans. The station and its on-air hosts are interchangeable with the Cubs, Sox, Hawks, Bears, Bulls and college sports; teams  that are constant subjects of conversations in a market with an insatiable sports appetite.

While arena and stadium naming rights have generated team revenue for years, ESPN1000 management led by Jim Pastor, entered into a groundbreaking multiyear agreement with First Midwest Bank, a locally owned financial institution that has a strong Chicago legacy. The deal has caught the attention of the sports broadcast industry. 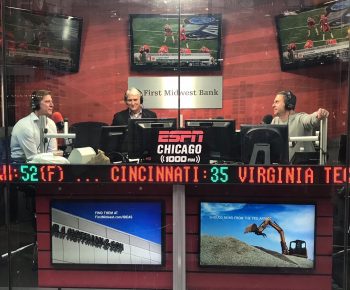 The partnership gives the bank the exclusive naming rights to the studio which will serve as the originating venue for all ESPN1000’s local sports talk programming, day and night. It affords First Midwest Bank weighty public recognition, reinforced through both eye and ear, pedestrians on a busy street and engaged listeners on-air.

So if there’s the United Center in the near west side, there’s the First Midwest Bank Studio right in downtown .

Yes, radio stations have done remotes for decades; a couple hours emanating from car dealerships or restaurants are rather common. This is dynamically different. To begin with, Pastor says that “the State Street studio, is the only one of its kind in Chicago radio. It is located at one of the busiest intersections and across from the historic Chicago Theatre in the ABC 7 building.” He says that thousands of pedestrians pass by the studio daily and that First Midwest Bank’s name will be prominently visible.

Jim Stadler, First Midwest Bank’s Executive Vice President and Chief Marketing Officer says that “Chicago is a great sports town and that in a broad way the relationship with ESPN1000 allows the bank to touch lots of sports conversations, not just one team.” He says that while the bank runs commercials on telecasts of individual teams, the ESPN1000 affiliation enables First Midwest to foster bonds with fans of teams that run the Chicago sports gamut. It’s a relationship reinforced every day by popular on-air hosts.

“While ESPN is a powerful global brand,” Stadler adds, “ESPN1000 is a powerful local brand. And we’re one of the few locally owned banks in town. So in many ways it’s a perfect fit.”

Selling studio naming rights was historically taboo. As such, you might say that Kraig Kitchin, an imaginative and tradition-breaking broadcast executive, developed an ear-popping conceptual framework in 2001. Running Premiere Networks at the time, Kitchin launched Fox Sports Radio and created the AutoZone Studio which he says provided the retailer with “a top of mind awareness to a largely male based audience, most of them in their vehicles.”

The idea was brilliant because the relationship was exclusively figurative; nothing more than theater of the mind. There was no street-side First Midwest Bank Studio which visitors can see, feel and touch. The AutoZone Studio existed only in name. Listeners might have thought  personality Jim Rome was actually in an AutoZone store, one  that also served as a studio. Functionally, nothing had changed. Rome was doing his show from an Orange County studio in California.

Kitchin should have patented the idea, as Pat Riley did when he termed the Lakers’ championship quest a “Threepeat.” Following Kitchin’s implementation of the AutoZone Studio, tens more of these virtual radio studios sprouted across America through talk and play-by-play networks. Eighteen years later, Kitchin isn’t surprised by how the idea ballooned. He says, “It came together nicely and has since been replicated in many other ways. It makes me smile to this day, when I hear it applied in other on-air conversations.”

You might say that the tangible First Midwest Bank Studio is a physical fulfillment of Kitchin’s imaginative seed. Kraig tells me that brand success requires on-air talent to invest emotionally. He says, “It’s necessary for hosts to view the sponsorship as a creative challenge, a part of their conversations and their vernacular.”

ESPN1000 and First Midwest Bank are armed. “The station has influential personalities. One of them for that matter, David Kaplan, uses First Midwest as his bank,” Stadler says. “Live reads build bonds and on ESPN1000, we can change copy to accommodate varying messages.” Stadler adds that there’s flexibility and it’s organically easy to implement.

Baseball announcers, particularly in the early years, were interconnected with marketers. Harry Caray was the Bud man, first in St. Louis and later in Chicago. Mel Allen’s home run calls were Ballantine blasts and even Vin Scully was often imitated for the spots he read for years on behalf of Farmer John.

Today, marketers are challenged by a littered advertising landscape. Put on a ballgame and financial institutions galore are advertising. It’s tough to set one apart from the other. It’s why the First Midwest Bank agreement sounds promising, one that the industry will be monitoring. Pastor says that First Midwest Bank can tap into ESPN’s healthy resources, its animated local voices, platform tentacles, staffers experienced in sponsor activation and strong digital assets.

First Midwest Bank’s slogan is “We have ideas.”  Partnering with ESPN1000 might be one idea that pays some healthy dividends.