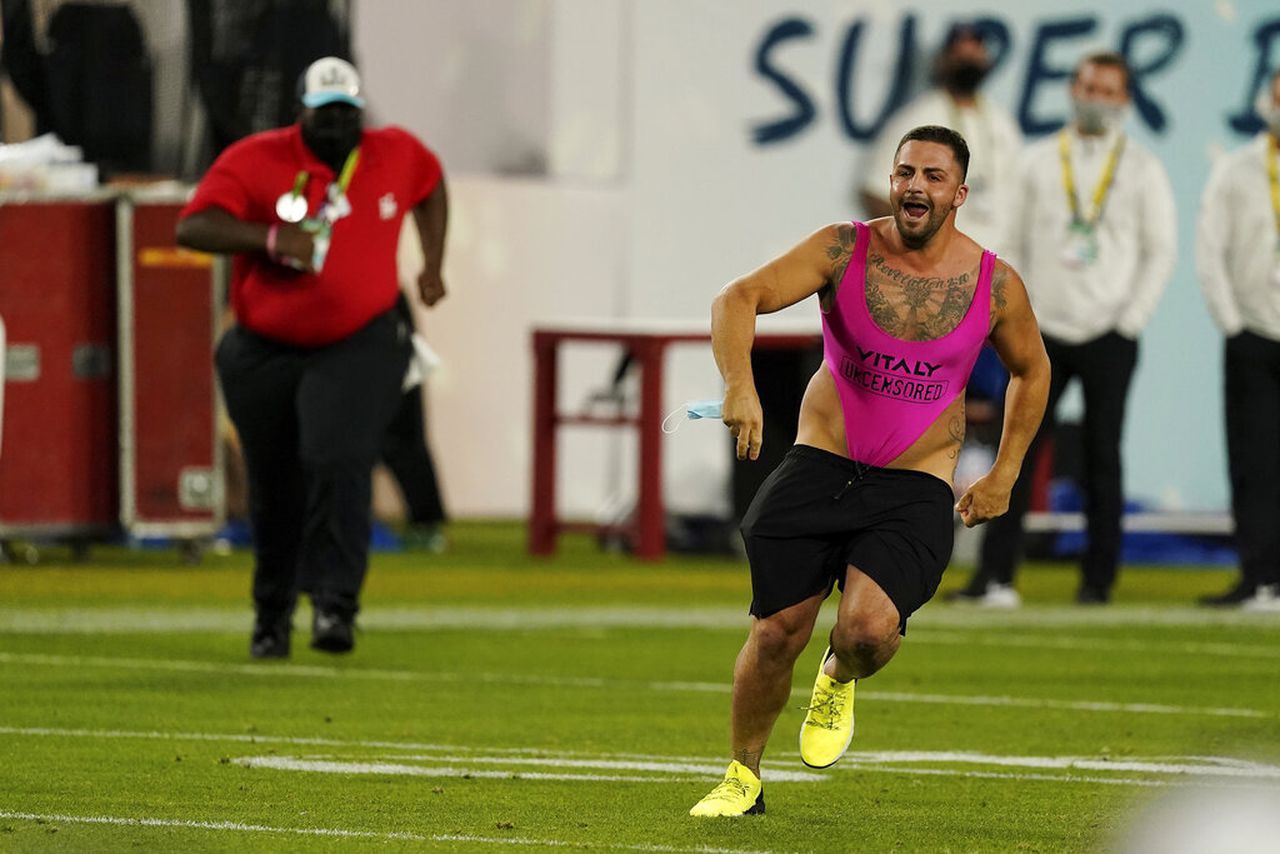 The security man was no match for the intruder at the Super Bowl. Kevin Harlan had a bold description of it on radio.

So it happened again. An intruder, this one half-clad, busted onto the Super Bowl field for his minute or so of fame.

It was perfect fodder for the man behind the microphone covering the game for national radio. He’s had experience with such commotions before. Kevin Harlan, the longtime national NFL radio play-by-play voice, has a history of making the best of these awkward and spontaneous moments.

You might say that a radio announcer’s job is to paint a picture of activity between the lines. If so, Harlan doesn’t miss a moment, whether it’s a player or a lunatic. In 2016 at a Rams-49ers game in Santa Clara, a degenerate thrusted his way onto the stadium surface and started dashing the length of the field. Unhesitatingly, the leather-lunged announcer broke into a graphic description of the trespasser’s moves. “The goof ball in a hat and in a red-shirt is bare chested. The guy is drunk, But there he goes. Somebody, stop that man! They tackle him at the forty,” a breathless Harlan bellowed.

The recording became a hit on social media.

In 2019, a black cat made its way onto the field at Met Life Stadium. and Harlan went off: “The cat is in the ‘CDW Red-Zone at the two yard line,'” he roared, getting a sponsor plug into his impromptu description of a  kitty holding up a ball game. Then, raising his voice excitedly, he exulted, “The cat runs into the end-zone. Touchdown!”

When the miscreant caught Harlan’s attention at the Super Bowl this past Sunday, he broke into a graphic diatribe. “A guy with a bra is on the field. He’s pulling down his pants. Pull up your pants, my man! He breaks the tackle of a security man! Take off that bra. Be a man!”

Traditionally, broadcasters stay away from these out-of-liners, so as not to encourage other gate-crashers and attention seekers. On television, CBS’ unsuspecting director broke away form his camera shot of the line of scrimmage the moment the intruder encroached the picture. Viewers got a quick glimpse but that was that. When the unwanted visitor was finally dropped at the one yard line, Jim Nantz quipped, “It’s the best run of the game.” A little needed humor from Jim during the biggest sporting event of the year that turned into a soporific.

Generally, when these things occur, announcers share only the bare minimum. They’ll simply tell the audience that the  game is being delayed because an unruly fan ran onto the field. That’s it. You won’t hear much else from the voices or see any of the tumult on the screen.

Today though, there’s no way to keep the colorful details from the fans. Invariably, someone in the stands records these incidents on their phones, places them on social media where they blow up. Audio descriptions like Harlan’s are then synced up to the video. Simply put, in today’s advanced world of amateur communication and the power of Twitter, it’s impossible to stop the dissemination of these disruptive scenes at stadiums and arenas.

As such, a guy like Harlan shouldn’t be silenced. It accomplishes little. Don’t censor the news.

Interestingly in the 1958 NFL title game between the Baltimore Colts and the New York Giants, the one  that’s dubbed “the greatest game ever played,” NBC lost its video line at the start of overtime. To buy some time to reconnect with the studio, an NBC employee was dispatched by the network to run out on the field. By the time security caught the man and he was ushered away, NBC was back in business.

In 1976, two men, a father and a son, ran out onto the Dodger Stadium outfield with an American flag and they were about to set it afire. Rick Monday, then a member of the Chicago Cubs, hurried over to them, and  swiped the flag away. For doing so, Rick is considered a hero. Vin Scully, on the radio that day said, “Rick Monday runs and takes it away from them. Can you imagine, they were about to burn the American flag?” In our divided country today, you wonder how this would have been viewed.

In the 80s there was an organized effort nationwide to flash large John 3:16 placards so that they’re seen on televised sporting events. The religious organizers were pretty good. They studied camera angles and had teams of activists nationwide who worked their local stadiums. Television understandably tried to avoid the signs but weren’t very successful.

The most famous incident of invading the turf was at the end of the 1982 Cal-Stanford game when as we know “The band ran out onto the field.” It’s called “The Play.” Cal’s Joe Starkey called it and it brought him some fame for some time.

Distractions during games are unavoidable. I can think of two off the top of my head. Both were benign.

Late in Marty Glickman’s career, he called University of Connecticut football and basketball. While he was the progenitor of basketball on radio, his true love was calling football. He played the sport at Syracuse and did the Giants for years.

Marty shared this story with me about a time he called a UConn game at URI. “The stadium at the University of Rhode Island was open ended. The wind was whistling through the stadium. Off to the corner of the lake, my eye caught a sailboat in the wind. Being a sailor myself, it drew my attention. I was really with the fellow as he kept getting knocked down and tried scrambling back up. I described it for the radio audience.”

I imagine that Marty did so while simultaneously calling the football game.

One man who did hear Marty that day was Joe Tait, the Hall of Fame basketball broadcaster who worked the Cleveland Cavaliers radiocasts for decades. He was driving from New York to Boston and was mesmerized listening to Marty.

Tait himself had a dandy one night too. Doing a Cavs game in Los Angeles, he was seated near the ultra-expensive seats where the privileged patrons enjoyed white glove service; caviar, champagne and other ritzy delights, all on silver trays and with linen napkins.

As Joe’s calling a fast paced game, the poor waitress who was making the rounds slipped. Suddenly the delicacies popped off the serving tray and headed in all directions. Tait didn’t miss a beat. He graphically described the commotion; glasses cracking, liquid all over the place and food staining designer clothing. He painted a picture of the poor server and her embarrassed face. Through it all, the great Tait never missed a pass or a shot.

I’m reminded of the banquet where Tommy Lasorda was talking about running (such as he did) toward the two would-be flag burners hoping one would hit him so he could get into a fight, and Rick Monday, who is much funnier than his broadcasting lets on, said something like, “Tommy, you just thought it was a picnic blanket and you were hoping to get some food.” It’s a funny thing. Russ Hodges is mostly remembered for one call–and the other night on “The Sounds of Baseball” Bob Costas and Tom Verducci went into Red Barber’s criticism of that call–and was… Read more »