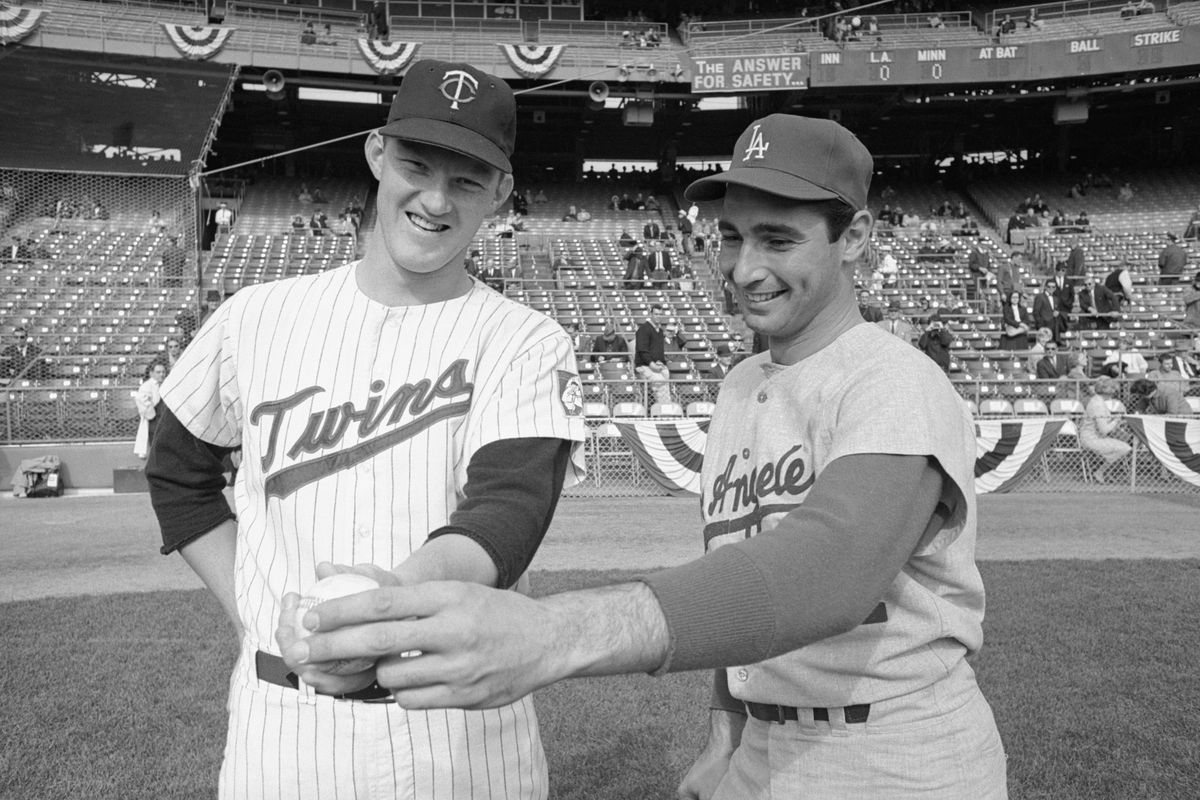 The starters of the seventh game of the 1965 World Series, Jim Kaat vs. Sandy Koufax.

Suzyn Waldman is so committed to the Yankees’ radio broadcasts that rarely, if ever, does she miss a game anywhere. But with Yom Kippur tonight, Suzyn won’t make it to Texas. Judge or no Judge, Waldman committed herself to a higher authority as the old Hebrew National ad said about the kosher hotdog. So it’s been 18 years between now and then and she’s always been there. You can count on it or her. For Sterling, not doing road games must feel sinful. You’ll need a crane to get him out.

The fact that Waldman who turned 76 last month and Sterling 84, are New York institutions at this point. I’m  quite sure that team executives and members of its flagship station, WFAN, want Sterling to limit his schedule and for the two to retire entirely at some point soon. After gently showing John directions and lightening his work-load palpably he already sounds better and more relaxed. His voice is now in better fettle than ever.

Andrew Marchand of the New York Post reported in the summer that John’s schedule was being pared to for the most part to just home games but Sterling kept pushing and the Yankees agreed stubbornly to a beefier schedule.

After all that, Aaron Judge elbowed himself into the Roger Maris race. As of this morning, Judge sat tied with Roger Maris at 61. Anticipating the excitement, Sterling called Chris Oliviero, a decent man, who manages the New York radio market for Audacy. He asked him if he can call the closing road games in Texas. According to Marchand who works the beat with dogged perseverance, WFAN had to rescind the assignment from Ryan Rucco, 35, so that he can tell Sterling he can call it.

Last night, the former Orioles’ relief pitcher, Jeff Nelson, 55, sat near John in the Arlington booth. The color man talked a lot, meaning Nelson. Lately it sounds like John is tiring late in games. Coming down to his final career strokes, Sterling understandably wants to call the 62nd if there is one.

In a season where a two-man race came down to the wire between power hitters Mark McGwire and Sammy Sosa, the St. Louis first baseman, hit his 65th home run of the year.  This title was ironically claimed against the Chicago Cubs, where Sosa hit his 63rd home run of the season. While the home run title is certainly not an award at which to scoff, this came in the steroid era of baseball, where only two years later Barry Bonds hit 73 home runs; a record that holds an asterisk to this day. Yankee outfielder Aaron Judge chases Roger Maris’ home run record of 62, an event so idolized that ESPN is cutting to his at-bats while broadcasting other sporting events to show the potential record-breaker live. Eras of baseball come and go, but it is still certain that the long ball is king in the major leagues.

Our publisher, David Halberstam, wrote a piece for USA Today a number of years ago on how Red Barber called it on TV. It was typical of Red. He spent more time talking about the “young fellow,” as he dubbed him, won $5,000 from a Staten Island businessperson for retrieving the ball. The Yanks’ Phil Rizzuto had an emotion call , one for the the archives and it’s continued to thrive there for 61 years. Holy Cow!

The 1962 World Series matched two of baseball’s greatest players in the game’s history, Willie Mays led the Giants against Whitey Ford’s Yankees. Ford was the pitching ace of the Yankee staff, recording a 33 and ⅔ scoreless inning streak in the World Series. Despite the fact that they lost the series, Mays’ hit in the second inning broke this legendary streak. Ford had a career era of 2.75 which ranks him as one of the greatest pitchers in baseball history, and Mays’ .302 batting average made this a duel for the ages. On NBC Network TV, two historic legends called all seven games, Mel Allen and Russ Hodges. In 1946, Hodges came to New York and was Allen’s sidekick. By 1954, Russ became his own head at the Polo Grounds. On network radio. Joe Garagiola and George Kell worked NBC national radio.

Known as a team with perennial bad luck, the Chicago Cubs pivotally defeated the Atlanta Braves in the NLDS to win their first postseason series since the 1908, a victory 95 years in the making.  Led by Sammy Sosa, the ‘03 Cubs won 88 regular season games and eventually lost in the NLDS to the Florida Marlins.  While the winning game did not take place at Wrigley Field, it marked some of the most success the North Side had seen since they won 116 regular season games in 1906. The Cubs would finally meet their destiny in 2016 when the Cubbies won the Series, knocking off the Indians, now the Guardians. Fox had the Series with Joe Buck and Tim McCarver. On ESPN Radio, Jon Miller and Joe Morgan hooked up.

Arguably, the athlete who changed the culture of sports more than anyone, was Michael Jordan with the Chicago Bulls. He won six NBA Championships and five MVP awards.  Jordan announced his retirement at a large press conference alongside Bulls’ owner Jerry Reindorf, completely, reshaping the media landscape of the NBA. This retirement, however, only lasted two seasons and Jordan returned on March 18th, 1995. He would go on to initiate another three championship ship stint, from 1996-1998 and two more MVPs.  Whether it be his on-court swagger, athletic ability, or just wanting to be “Like Mike,” Michael Jordan helped make the NBA a global juggernaut, as the digital was just beginning to erupt. Moreover, in the years ahead, Jordan became one of the critical pillars in American culture.

In a game between the Chicago Bears and the New Orleans Saints, legendary running back Walter Payton passed Jim Brown, for most career rushing yards. Payton would end his career with 16,726 rushing yards, second all-time behind only Emmitt Smith. The call was made by Joe McConnell and Brad Palmer, where at the time, viewers at home watched on the TV with muted audio but listened on the radio.  Walter Payton is still honored in football today with the Walter Payton Man of the Year Award, given to the player who has made a lasting impact in their team’s community.

Really, in the big moment, it should be simple: Make the call and let the crowd roar. Both Yankees broadcasts had too much chatter, and let’s just say that Roger Maris may have been a fine “fellow”–Red once said that no matter how much pressure he was under, Maris was always gracious to him that season–but “Jolly Roger”?

Agree with Mr. Green. I don’t ever remember Roger Maris having been called the “Jolly Roger.” Matter of fact the Yankee fans were rooting for Mickey Mantle, the legend, to break Babe Ruth’s record, not Maris. I don’t think the ’65 WS was “forgotten.” In his first years in Brooklyn before he achieved fame, Koufax was taken under the wing of Dodgers bullpen coach Jake Pitler who encouraged Sandy to observe the high holidays and not play. No one was concerned about Koufax not playing when Sandy was a “spare part” in Brooklyn but it became a big deal when… Read more »

One other comment, I don’t think Red Barber could ever have been characterized as “exciting.” He was dull especially compared to Mel Allen. Red was very much understated – my older brother told me that on a Dodger home run it would sound something like.. “here’s the pitch to Snider…there’s a belt…that’s all.” Credit to Michael Kay for canning his “see ya” on Judge’s 62nd HR, but not the same for John Sterling who you knew would go into his “it is high….. They both used the phrase “case closed.” Coincidence?