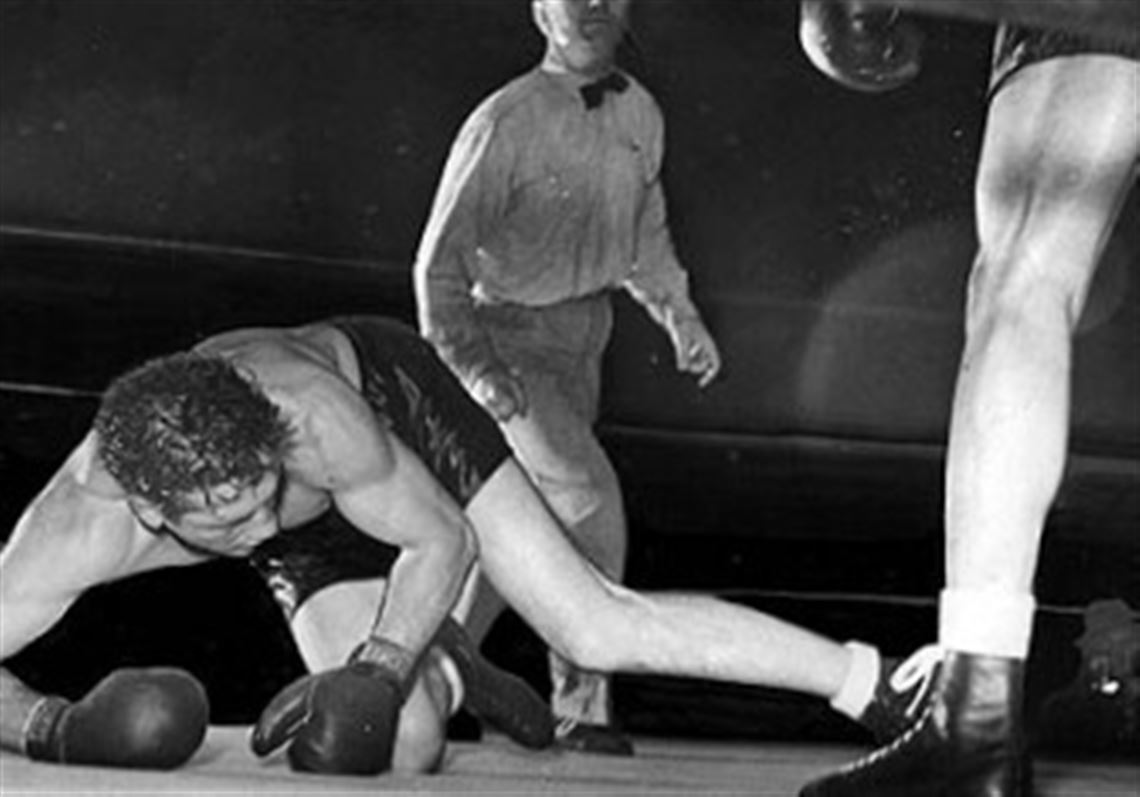 His name was huge during, around and after the war. He was beloved for his rhythmic delivery with a sport and its heroes. Boxing was huge.

Let’s remember the sparkling Don Dunphy, a track star and known as a good all-around athlete at Manhattan College in the Bronx. He was born on July 5th in 1908 and died just 17 days after celebrating his 90th in 1998. Dunphy maintained his vigor and wit to the end.

He’s also considered the best blow-by-blow announcer ever. He conquered radio first and then moved to television. You’d hear his voice and you figured, there’s some pugilism near here. The fact that he did so many of the early television fights says lots about the legends ability. He excelled. If I’m not mistaken, one Mets’ season, he did the pre-game show on radio and Marv Albert the post game.

Once America launched commercial radio in 1921, the country’s economic ingenuity figured it out. Drawing the blueprint was just the first step. At first, the major heavyweight bouts were called by the biggest names and voices. Local boxing was covered too. When headline title fights were held, Graham McNamee, Clem McCarthy and Bill Stern were called to the stage. It was a glamour event and evening ware was generally rich. Don’s national career began in 1941 and he ruled from there.

The biggest fight of those days was when Joe Louis pummeled the German Max Schmeling at Yankee Stadium in June, 1938. Word had it that Hitler listened in Germany in middle of the night and  wasn’t too pleased.

In 1941, when Gillette outbid Adam Hats for the marketing rights, Sam Taub, the original voice of boxing was out of work and Don was in.

Nuggets about Dunphy, a blast from the past from Mr. Biofile, ‘Scoop’ Malinowski:

American television and radio sports announcer best known for his boxing broadcasts. The International Boxing Hall of Fame inductee was distinguished by his fast-paced, enthusiastic delivery, precise attention to detail and diligent preparation.  Boxing experts estimate Dunphy announced the “blow-by-blow” action for over 2,000 prizefights, including historic bouts like the 1971 Joe Frazier vs Muhammad Ali World Heavweight Title fight at Madison Square Garden. He also appeared as an announcer in such films as Raging Bull, The Greatest, Woody Allen’s Bananas, Matilda and The Fighter. (Note: This Biofile interview was done by phone in 1993.)

Childhood Ambition:  “I wanted to be a big league ballplayer. At one time I thought I’d make it. But my best sports were stickball and touch football. In the summer on Saturdays we’d play stickball in the morning, then take a subway to Van Cortland Park and play baseball. Then we’d come home and play stickball again that day till it got dark. Then I’d go get a half pint of ice cream and some sort of sports book or almanac and I’d read that until it was time to go to bed.”

Childhood Sports Heroes:  “Babe Ruth. Number one, no question about it. He was such a great ballplayer. I saw him play and met him once. It was in 1936 just after he retired. I was assistant sports director for WINS radio and I did a radio show from Ruth’s apartment for a week. He picked the All-Star teams for Hearst newspapers  and WINS was owned by Hearst. Ty Cobb – I was sitting in the bleachers over the Yankee bullpen at the Polo Grounds and I got a brainstorm: I left the seats and went to where the players went through the bullpen to get to the locker room before the game. I said, ‘Mr. Cobb, could I sit in the bullpen?’ He said, ‘Sure.” I was a very young kid, but I had ideas [laughs].'”

Early Boxing Memory:  “The Dempsey-Willard fight in 1919. In those days there was no radio or TV. The saloons had the news ticker reports. And somehow I got into Guilfoyles Saloon at 103rd Street and Amsterdam in New York City. They let me read the tape as it came over the ticker. They had to let someone read it because not everyone could read. You could say it was my first broadcast. It was a popular way, in those days, for people to get sports results. And they got them that way.”

Greatest Career Moment:  “Oh, there were several. Naturally the first fight between Joe Louis and Billy Conn in 1941. It was my first network fight for Mutual Broadcasting and we had a rating of 56.2. It was the highest rated show outside one of President Roosevelt’s speeches. The war was going on in Europe at that time. To me, the most important night in sports history…Ali and Frazier in 1971. Though it may have been eclipsed by the Super Bowl or the World Series. There was worldwide interest. You couldn’t get a ticket anywhere. All the senators and politicians had them. It was so hard that, to get in, Frank Sinatra was a photographer for LIFE Magazine. Everyone wanted to do it…I was selected to announce the fight. To me, that was the greatest. An amazing evening.”

Most Painful Moment:  “The night Benny ‘Kid’ Paret was knocked out by Emile Griffith (in Madison Square Garden), and later died.” 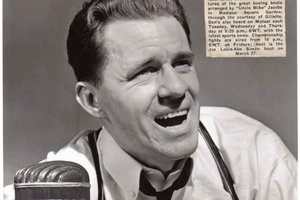 Pre-Fight Feeling:  “I try to know as much about the contestants as I can. It annoys me to listen to current day broadcasters who don’t know enough about the fighters. In my career, I never missed a weigh-in. But I didn’t want to get too close to a fighter because I didn’t want to lean toward him during the fight… or lean against his opponent. I also think that some of today’s broadcasters talk too much. You wouldn’t want to go to a fight and have someone sitting next to you talking the whole time. However, they’re doing a good job.” (Don Dunphy – left)

Favorite Boxers To Watch:  “Joe Louis. He certainly was tremendous. Jack Delaney. Beau Jack. Rocky Marciano. Muhammad Ali. Willie Pep. Evander Holyfield – he seems like a nice person. Riddick Bowe. Mike Tyson – he may end up being one of the greats. But at the moment he doesn’t have the record. I often wonder what a war it would be if Marciano at his best fought Tyson at his best.”

Favorite TV Show: “I Love Lucy. My wife (Muriel) and I watch it every night.”

Toughest Fighters:  “Rocky Marciano. The shot that he hit Jersey Joe Walcott in the 13th round when he won the title from Joe was the most important single punch I ever saw. The shock was that Walcott was winning the fight. In the 11th and 12th rounds he gave Marciano such a beating I didn’t think Marciano would come out for the 13th. And in the 13th he seemed as fresh as a daisy. Jake La Motta. Nobody was as tough as Jake. He could absorb a lot of punishment. Carmen Basilio. I did a lot of his fights. He proved he was tough.”

Future Ambition:  “Play in a lot of celebrity golf tournaments like I did this week. All for charity. I was a 14 handicap once. My game was pretty good… about twenty years ago.”

You can read more of Scoop’s Biofile interviews at www.mrbiofile.com

Thank you–this is wonderful! And some forget that Dunphy also did baseball–he and Bill Slater did the Yankees in 1944 and, since Gillette was the sponsor, they also did the World Series.

His son Bob Dunphy has had a long career in television production, too.

With my father and brother, we watched the Friday Night fights on ABC-TV with Don Dunphy working alone. I vividly recall sharing Don’s “most painful moment” when Emile Griffith knocked out Benny “the Kid” Paret who went into a coma and passed away several days later. It was a major news story at the time. There was a public call to “ban boxing.” It turned out to be the last major fight refereed by the great Ruby Goldstein, who was long acknowledged as the best in the business. The boxing authorities along with pundits targeted Ruby for not stopping the… Read more »