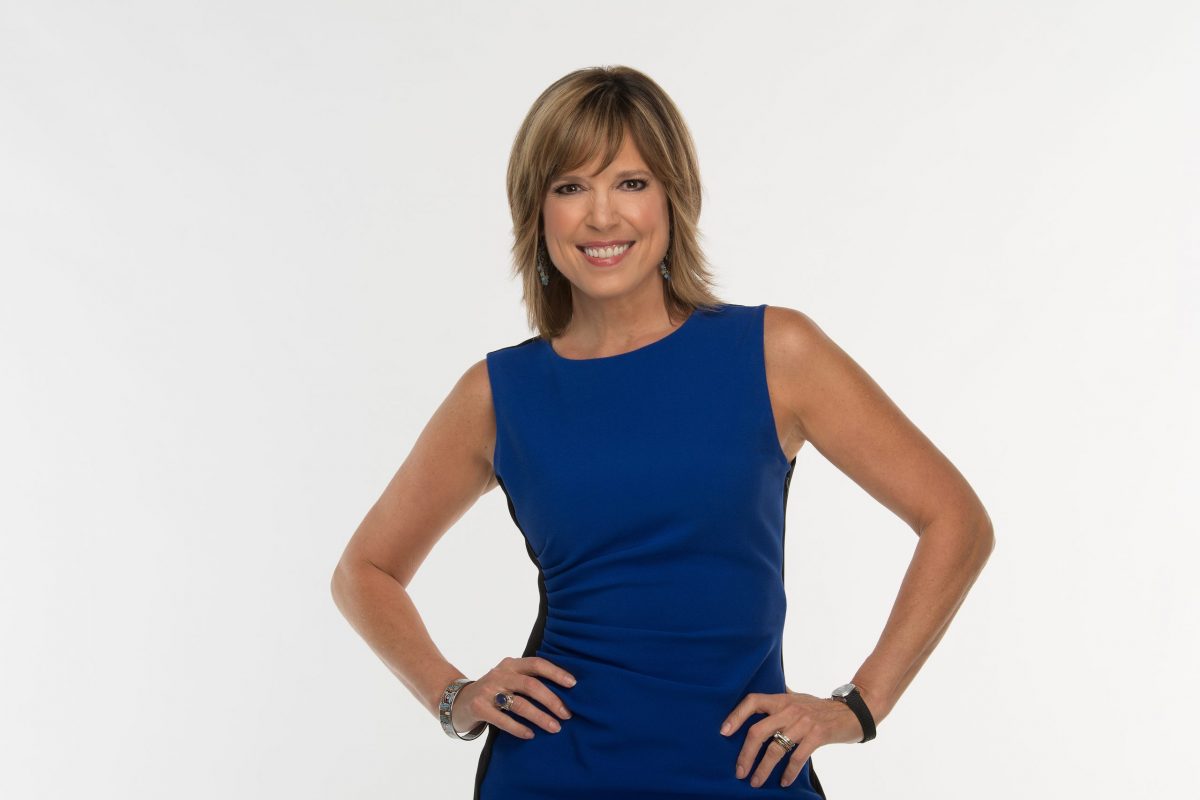 Veteran Hannah Storm got her first network break at CNN in 1989. Women went through a tougher baptism then breaking into sports broadcasting (Photo by Joe Faraoni/ ESPN Images)

ESPN’s Hannah Storm was exposed to sports through her father, Mike Storen, former commissioner of the ABA which merged with the NBA in 1976. She grew accustomed to having giant professional basketball players in her house, attending games sitting in front-row seats and moving to different cities as her dad worked for franchises both before and after he served as the top executive of the ABA . Hannah clearly enjoyed it and followed in her father’s footsteps to attend Notre Dame.

She began working with Commissioner David Stern during the 90s while covering the NBA on NBC. Stern never went out for lunch, so Hannah and her colleagues, including legendary NBC Sports’ boss Dick Ebersol spent time regularly eating sandwiches in David’s office reviewing stories they planned to cover on NBA telecasts.

Their relationship didn’t end there. David was a mentor of sorts to Hannah. “For years after, I would go to his office with a turkey sandwich, a chocolate chip cookie, and a diet coke. I would get his advice,” Hannah added.

Beginning in 1989, Storm went through a challenging indoctrination after accepting her first network job. She was the first female host of CNN Sports Tonight. It led to a fair share of hate mail and hazing by colleagues that included Playboy pages posted on her bulletin board.

Storm was hired by NBC in 1992, where she hosted four Olympics and three World Series. In 2002, Hannah broadened her career when joining CBS. There, she was prominent on “The Early Show,” covered the 2004 presidential election, the Iraqi War and Hurricane Katrina.

Hannah joined ESPN in 2008, serving as an anchor for SportsCenter. She then created Brainstormin’ Productions and has since produced and directed several projects.

But in 2012, she experienced a traumatic event when she was hit by the explosion of her gas grill, causing burns to her face, chest and hands. She was back on-air less than a month later.

The friendly Storm is married to Dan Hicks of NBC Sports. In addition to anchoring at ESPN, she does play-by-play of Thursday Night Football for Amazon Prime with Andrea Kremer.

This year, Hannah will also host ESPN’s Countdown Show to the ESPY’s.

I’m sure you have emotional scars from the fire eight years ago. How does it affect your life?

One of the things that helped get me through that rough stretch was that I grew up with a vascular anomaly, a really prominent birthmark on my face. When I’d look in the mirror I’d see the slight disfigurement. I grew up with many surgeries and an imperfect look. So inside of me, I felt that I can handle it. While what happened was traumatic and yes, I felt and looked horrible, yet my attitude was positive

In the summers, when it gets hot or even when I get tired, my hands and my chest still get really achy. I have to be very careful in the sun and don’t use that grill anymore. I’m an avid cook and I got myself a wood-burning grill. Anytime I turn on the gas, and it doesn’t catch right away, it scares me. Getting close to any type of fire scares me!

Tell me about your time covering Michael Jordan.

After covering him on on the Dream Team, which was an incredible experience. I was there for almost all of his really big NBA games: the shot against Cleveland, the flu game and his final game with Chicago.

I worked in Charlotte, when he came to town. Being in the locker rooms as a young woman was something I did not enjoy, but Michael Jordan had the best manners. He called me ‘ma’am.’

I was pregnant for a couple of his title runs. One time he was like, “You’re pregnant” and I was like ‘I haven’t told anybody, but you’re actually right.’ I’ve stayed friends with him through the years. He is the best.

Did you watch any episodes of The Last Dance? What were your thoughts?

I watched all of it and loved it. A great portion of sports audiences are young. So it was a great way to introduce Michael to younger generations. He’s not just a logo, and he’s not just a shoe. When we compare him to LeBron using stats, it doesn’t tell the complete story.

Having been involved with seven films, I can tell you that the director (Jason Hehir) is brilliant. One of my favorites was when Michael bet the security guards on some little coin game they made up. The series brought that period to life, twenty plus years ago.

I was in some of those scenes, and Dan, my husband, was in some, which made us laugh about the old footage of both of us. My daughters thought that was hysterical.

In what ways do you feel the documentary is an accurate or inaccurate portrayal of the team and Michael Jordan himself?

It was 100% accurate. I was there. One of the most important things they did is describe the frustration, particularly the early losses to the Pistons.

How do you deal with criticism on social media?

One of the things I learned at CNN was from Jim Walton, who taught me to absorb all hate mail in a healthy way, to understand that it is borne out of ignorance and bigotry. That it was not any reflection on me, and I shouldn’t change who I am.

There are just people who will never accept a woman sportscaster. That really helped me when I took the Amazon job to do Thursday Night Football with Andrea Kremer. It was the first ever all-female team to do NFL games.

How has your marriage with sportscaster Dan helped both of your careers?

It’s been fantastic. We have a built-in understanding of workload. We were both at NBC for some years, never on the same assignments. Even at the Olympics we’d be on different stories or events.

Beautifully, while raising daughters, our schedules really worked out. The two of us were never gone at the same time. There’s always one parent around, and sometimes both. We were around a lot for many of the school events.

It’s also nice to be able to talk to Dan about work things. We provide one another mutual support. We do end up talking about sports a lot. Then we realize we need to talk about something else.

Which broadcasters did you want to be like when you were younger?

Then when I became a broadcaster, Bob Costas set the standards for conducting interviews. When I got to do play-by-play, Marv Albert was who I turned to.

What suggestions or advice would you give young broadcasters starting out in the business?

I do think that English and writing are huge. We write 100% of what we read at ESPN.

Radio is a great training ground for TV. Most of the greatest broadcasters started in radio.

The main thing, it’s a cliché, yet so true, ‘the harder you work the more success you’ll have.’ There is zero substitute for it. Hard work engenders lots of respect. Everyone knows who works hard and who doesn’t.