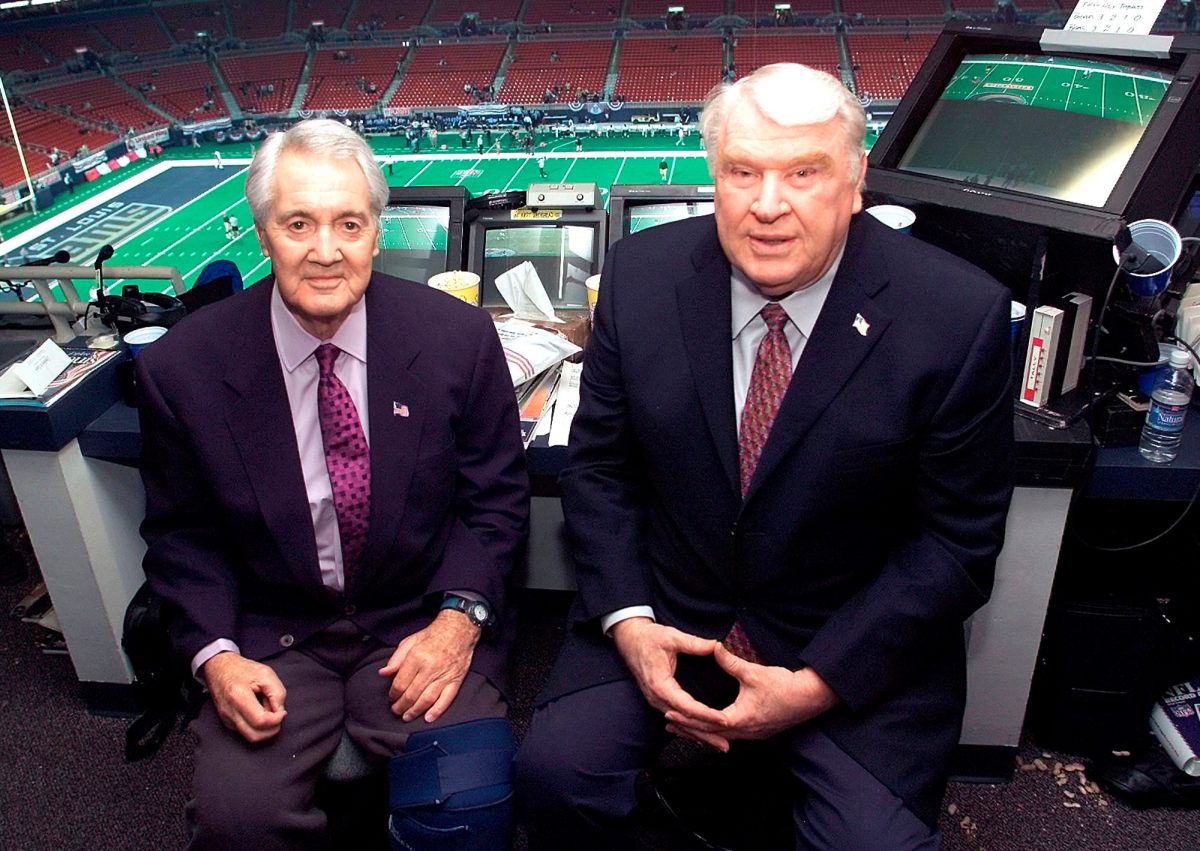 We’re planning a detailed report within the next two weeks that will include the names of sports announcers 70 and older who are still working on-air. At last count, the list which is still being tightened and completed exceeds 100 such voices.

You might wonder how those who reach the very top of the heap deal with retirement or separation. Some cope with it and others embrace it. There is much to consider. The dough is one. The folks at top network levels make many millions. Some invest well, others don’t. Some have lots of money but never feel financially secure.

Many are spoiled. Steep salaries, exclusive lifestyles on the road and public recognition are tough to shed. But fame at that level fades quickly. Remember Andy Warhol’s expression about media celebrities, “15 minutes of fame.” Out of sight, out of mind.

The other day I almost fell off my chair when I spoke with a young California teenager who spit out batting averages of every member of the Dodgers. When I asked him about Vin Scully, all he can say is that he heard of him. Goodness!

Allow me to indulge by shooting from the hip.

Pat Summerall tried to retain some piece of broadcasting once he gave up the big chair next to John Madden. For decades, he had been football’s number one voice at CBS and later at Fox. But Summerall wanted to do play-by-play although he had lost his fastball. So the Foxies pegged him lower on the depth chart and gave him work. But Pat labored. It was a painful listen for those who remembered his once command. At his last address, Madden partnered with Al Michaels at NBC. He then hung up the cleats at 72 and really hasn’t been heard from since.

Curt Gowdy stayed active after he was number one at NBC. He did football on CBS at a time when his sharpness had already dulled. The Wyoming Cowboy then worked Patriots radio but at that point, the broadcast game had passed him by. Great man, a legend and most importantly a decent human being. But time is coercive and inexorable.

I love how Verne Lundquist proceeded. He gave up football and basketball. He told me, it was too much. He left at the top of his game but remains an icon on CBS’ golf coverage. Dick Stockton just turned 77 and is pacing himself. He’s not working at the great frequency he did thirty years ago when he did basketball, football and baseball. Yet Stockton is still a good listen on Fox’ NFL coverage. Is he flawless? No. But only the biblical pharaoh claimed he was. Dick still works his analysts well, breaks in newer commentators gently and serves them as a caring mentor. Stockton still identifies games’ big moments well and gives them their deserved theatrical treatment.

Greg Gumbel, 73, was dropped years ago from the number one spot on CBS’ football. Working the play-by-play booth today in a lesser role, he’s no better or worse than he was at the top. Gumbel was never a number one play-by-player. He’s fine but the booth is not his strength. I still like him in the studio on college basketball. His relaxed style at halftime is a pleasant diversion from the madness of the game broadcast.

Those old enough might remember Gary Bender. He had a cup of coffee as CBS’ lead NBA and college basketball voice. After being dropped, he did the Phoenix Suns home games on cable. Ray Scott, once among the hottest names in broadcast football, never used an agent and never made big money. After CBS didn’t renew his contract, he bounced around, bought a bar in Minneapolis and did a variety of things to make ends meet.

At least 119 sports voices, many big names, are 70+; Sportscasting is no longer a young person’s game

Billy Packer took a deep dive right back into his flourishing business after three decades as the nation’s top college basketball analyst. Packer says he hasn’t been back to a college basketball game since hanging up the mic in ’08. His son Mark Packer hosts a sports radio show in the Carolinas. I miss Billy. He never held back. By the way, Billy is a luddite. He told me last year that he doesn’t use a computer. Packer will be 80 in February.

When I asked him how he deposits money in the bank, he paused as though I had asked him the dumbest question he ever heard. “I go inside, fill out a slip and walk over to the teller. Why, how do you do it?”

While he never quite said it, I get the sense that Al Michaels, 75, wouldn’t accept a reduced role. He’s turned into America’s play-by-play announcer and he’s treated royally by NBC for being the crème de la crème. Al hasn’t lost an iota of his sharpness. Members of top network broadcast teams have almost limitless access. So why would Al accept fewer privileges? Anyhow, he’s not reached the decision making point yet.

Ask yourself what Commanders-in-Chief do after their terms end. Now they make six figures for each speech. It wasn’t always that way. President William H. Taft became the Supreme Court’s Chief Justice after his presidency ended. The hefty Ohioan served as such until his death. I don’t think there’s a job like that in sports broadcasting.

A number of years after NBC lost the NFL, Dick Enberg jumped over to CBS and became number two on the NFL depth chart. When that ended, he turned to baseball in his hometown of San Diego. Unfortunately, not long after he retired, Dick passed suddenly.

The late Keith Jackson was another one who formally retired and came back to do regional games out west. He and the broadcasts were not the same. Remember Tom Hammond, a class act, and superb announcer. Tom seems happy in retirement serving on a board at his alma mater, Kentucky. At last I heard, NBC was talking with Hammond about reengaging in Olympics work. He still has what it takes.

Thinking Kentucky, my stream of consciousness leads me to Hall of Famer Cawood Ledford who was more popular in the Commonwealth than even Ashley Judd. Ledford retired on his own volition in his mid sixties. Rick Pitino who coached the Cats then begged him to stay on but Ledford said that’s it. Cawood did so when he was still good.

Another guy I admire is Brent Musburger who has enormous talent, smarts and nine lives. Brent was resourceful off the mat when he was fired by CBS in 1990. He worked his way up the ladder at ABC/ESPN and when that ended, he turned into an investor at VSiN in Las Vegas, where he hosts a regular betting show that’s streamed. He’s also on Mad Dog Russo’s show regularly on SirisuXM. And if that’s not enough, he calls Raiders games on radio. Musburger hasn’t lost a spring to his step yet. At 80, he’s going strong.

And who said broadcasting is a young business? There’s one lesson here. Find something else you like, something about which you’re passionate. As Dick Enberg told broadcasters, “I sit in this chair, I don’t own it.”

Look for our detailed 70+ report soon.

On the topic of aging, Jake Baskin passes this along regarding NHL announcers.

Ten active NHL announcers are over the age of 70. On play-by-play, the elder statesman is Rick Jeanneret, 77, who calls half the Buffalo Sabres games on a TV-radio simulcast. He initially planned to retire in 2016 and already has a designated successorin Dan Dunleavy, but loves his job enough to return to the broadcast booth each year.

Doc Emrick is 73 and still the #1 NHL voice in America. He left the New Jersey Devils in 2011 to focus on his work with NBC. Bob Kurtz, the original radio voice of the Minnesota Wild, is 72 and just started cutting back his schedule from 82 games to 69 this year. Mike Lange on Pittsburgh Penguins radio is 71 and has only called home games for the last three seasons. Sam Rosen is 71 and does a full schedule on television for the New York Rangers, minus the five or so games his misses to call NFL games for Fox.

On color, Hockey Hall of Famer and Tampa Bay Lightning co-founder Phil Esposito leads the way at 77, though he only calls home games on Lightning radio. Mickey Redmond is 71 and still works the majority of Detroit Red Wings games on TV. He doesn’t make long road trips, but that is more due to celliac disease than his age. Ex-NHLers Butch Goring (70, New York Islanders TV), Tom Reid (73, Minnesota Wild radio), and Chico Resch (71, New Jersey Devils radio) do full schedules for their respective teams.

This is really interesting and I look forward to the big list! I would think doing hockey has to be the toughest for someone who is older, followed by basketball because of the almost constant action. Yet even in his mid-eighties, Chick Hearn could still bring it. On other sports, I think of Marty Glickman saying when he did the Jets in his seventies, he tried to use fewer words because he knew his reflexes were slower, and I think I detected Bob Murphy doing the same on Mets broadcasts as time went on. Then we think of Vin. He… Read more »

Curt Gowdy was also on of CBS’s post season radio voices during the 70s. Great article!

I think he also came back to do the playoffs on CBS Radio in the mid-1980s?

By the way, at the local level, I could have mentioned Gowdy’s partner on CBS Radio: Ernie Harwell. He did the Tigers until 2002 and while I think he slowed slightly, not much.