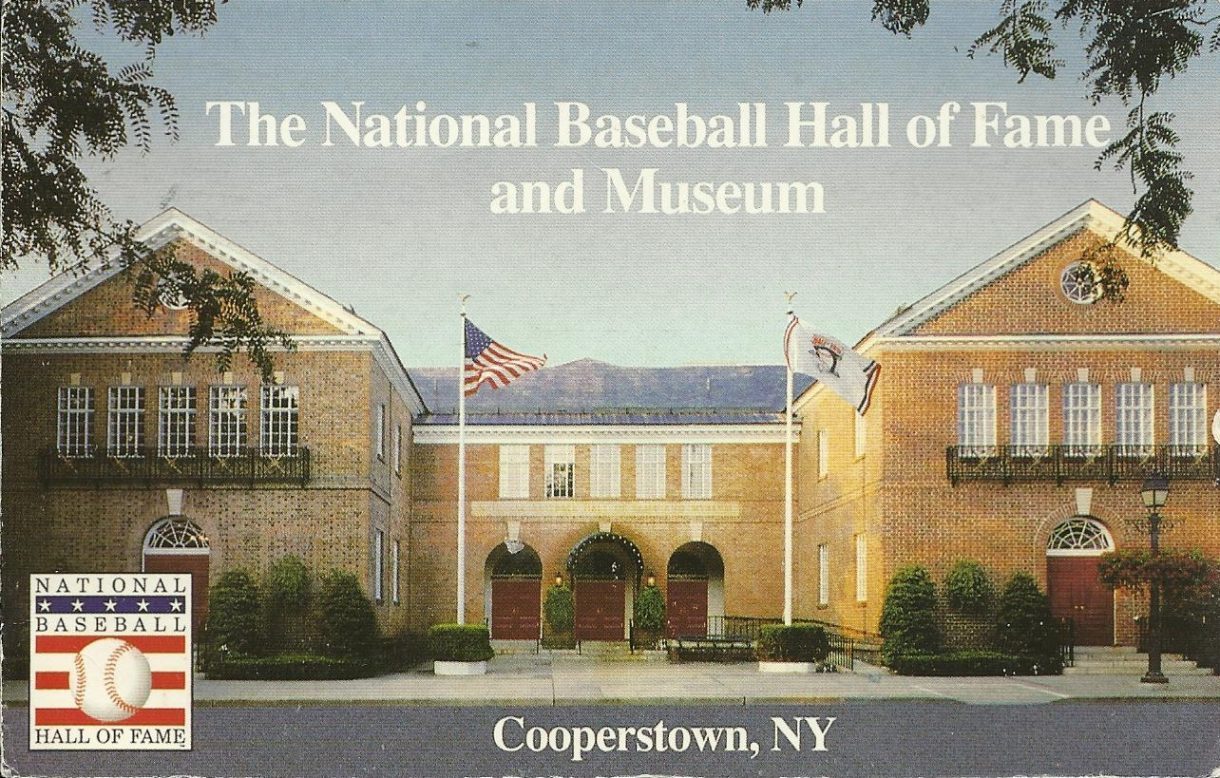 Since 1978, the National Baseball Hall of Fame and Museum has chosen a Ford C. Frick Award for broadcast excellence. This year, as part of the award’s cycle, its 2019 recipient was to be a pioneer —and is. Yesterday, Al Helfer, a Falstaffian radio/TV Cortez, was named the 43rd Award recipient by the Hall’s 15-member Frick Award committee.

Webster’s defines pioneer as “a person who is among the first to explore or settle a new country or area.” Post-war New York debated the Giants’ Willie, Yankees’ Mickey, and the Dodgers’ Duke—also announcers Russ Hodges, Mel Allen, and Red Barber, respectively. Helfer is the only man to have worked at one point with each Voice and for each pre-1958 New York City team at the Polo Grounds, Ebbets Field, and Yankee Stadium. Al beat other 2019 pioneer finalists: Connie Desmond, Pat Flanagan, Jack Graney, Harry Heilmann, Waite Hoyt, Rosey Rowswell, and Ty Tyson.

From 1950-54, Helfer also explored much of “the [remaining] country or area”—65 per cent of America not lit by local major-league coverage. His pioneering Mutual Radio regular-season Game of the Day ferried a big-league game each Monday through Saturday to a vast majority of the land. (The author, raised in a small town, is a Frick committee member.) Since St. Louis was the bigs’ farthest south/west outpost, for two in three Americans Helfer was April-September’s sole radio Voice—and what a presence his was.

Helfer was born 30 miles southwest of Pittsburgh to a 5-foot-9 dad and 5-foot-3 mom. Go figure: The 6-foot-4, 275-pounder—“They never knew why I was so big”—began radio at 16, played basketball and football at Washington and Jefferson, and at 18 chose the wireless over a playing pact tendered by Connie Mack. He re-created the Pirates, then joined Barber at 1935-36 Cincinnati—an exception from the age’s custom that Voices had to work alone. “Five bucks a week,” Al bayed, “and I was worth every cent!”

One day Helfer called a bicycle race. “And here comes DiBaggio,” he roared, “like a bat out of hell!” Temper followed him to NBC New York. In 1939, Al dedicated a hotel. Thrice the open failed. “Are we going on this god-damned network?” he flared. Fast thinking saved the day. Using a pseudonym, Helfer said he was still in Cincy. “What about that phony name guy? He was fired from New York.” That spring, Barber phoned, saying, Al alleged, “Let’s get together again and give ’em hell”: Brooklyn the first Big Apple team to merely permit the wireless.

Next year, the Yankees and Giants tried to muscle in, grasping that radio would help, not hurt, attendance. “Leave Barber,” they told Al, who instead spent 1939-41 in Flatbush. In 1942, Helfer—to Red, “Brother Al”—began three and a-half years in the Navy, his 1943 signal launching the Allied invasion of Sicily. Radio’s Cavalcade of America starred Alfred Drake as Lieutenant Commander Helfer. Returning, Al aired Army-Navy football through the 1940s and ’50s. He also spurned Brooklyn—“Connie Desmond was Number 2, and I didn’t want to hurt him [fuel his alcoholism]”—for the Yanks, ‘Jints, and wife Ramona. Friends debated the greater test.

Romana had her own band, played piano with Paul Whiteman’s Orchestra, and performed at Buckingham Palace. “A four-foot knockout,” said once-Mutual Voice Al Wester, “who assuredly handled Al.” Year by year it got harder to recall who was airing whom. In 1946, Larry MacPhail bought the Yankees, approached Barber, and was rebuffed. He hired Allen from the Giants. Mel, having worked with Al in 1945, dumped him for Hodges. In 1949, the now-’Jints’ Russ hired Al! “Wherever you looked, we were playing musical chairs,” said Helfer.

That year, the Liberty Broadcasting System bred Game of the Day. Older (1935) and larger (about 700 outlets), Mutual took it personally. “We had more to lose and offer,” said sports head Paul Jonas. Would a daily series dilute its All-Star Game and World Series coverage? A Game might cost $4 million. Could Jonas make it up?” “If we did baseball, we wanted to do it right.” Ultimately, as opposed to re-created Liberty, that meant live. Mutual’s Game began April 18, 1950. “Everything as it happened, from where it happened,” said Wester. Jonas weighed 100 pounds. As Voice, he chose someone who could lift him with one hand. Once he and Helfer entered a hotel lobby. “My God,” someone cried, referencing the Bible, “here comes Jonas and the whale!”

Each day but Sunday, Al would board a plane, once or twice daily for, say, St. Louis, Boston, Chicago, Detroit, or Washington. “Different game, different city,” he said, repairing late Saturday to Helfer’s home outside New York. “The Ghost of Hartsdale” got fresh laundry “and left before the door swung shut. My daughter was growing up. I loved, but didn’t know, her.” Mutual loved Game’s success. “A guy in Oklahoma had devoured baseball in the paper,” said Jonas. “Now he’s hearing Helfer each day”—also sidekicks Art Gleeson, Gene Kirby, Bud Blattner, and a man who despised, and was despised by, Brother Al. 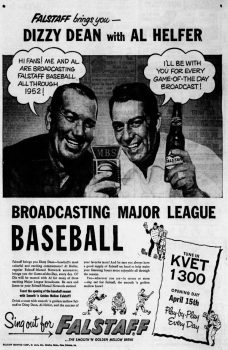 Helfer and Dizzy Dean argued between innings, enlarged the English language, and refused to share a plane. “Huge weight and ego. Between ’em, they weighed 600 pounds,” laughed Wester. “In a small booth, like Milwaukee, the tubs would almost come to blows.” Once, Diz sang “The Wabash Cannonball.” Al nearly took a punch: “Want to be a damn comedian? Visit Las Vegas.” For five (1950-54) straight years, Helfer visited Mutual’s All-Star Game. He also did those World Series over Mutual, Canadian and South American affiliates, and Armed Forces Radio—as many as 1,490 outlets. In 1952, a record 65 percent of U.S. homes heard at least one game.

By 1955, Helfer had traveled “four million miles: I counted it”—for Mutual. “Finally, the doctor told me to resign.” He reappeared each July to air the 1955-58 All-Star Game on NBC TV—also 1957 World Series. Brother Al joined the 1956 Dodgers—“then with the Bums sang a 1957 season-long adieu. The O’Malleys went to California. Helfer spent much of 1958 in Philadelphia doing games back to New York. “Big mistake,” he said. “No neutral team [Phils] was going to replace the Dodgers.” In 1962, he aired the rookie Colt .45s. A last outpost of work berthed 1968-69’s Oakland A’s. One night Reggie Jackson homered with Ted Kubiak on third base. “And Kubiak will score easily on the play,” Helfer said, intently—no longer Mr. Radio Baseball, but still able to stir a fuss.

Helfer aired 14 no-hitters, including Catfish Hunter’s 1968 perfect game. Favorite baseball call: Gabby Hartnett’s “Homer in the Gloamin” to win a 1938 pennant for America’s Cubs—and Bobby Thomson’s Rock of Ages blast to cap the Giants’ 1951 playoff miracle. Al died May 16, 1975, still swaggering like a sailor. His eulogy sung a grace note. In 1952, Bucky Braham in North Carolina began sending letters. “The young boy wanted to be a baseball player,” said Helfer. Ultimately, letters stopped. A 1953 telegram said that Bucky, with polio, was not expected to live. Asked to “say a few words on the air to cheer him,” Al did.

A next-day telegram to Helfer read: “We don’t know what you did, but you have done something medical science couldn’t.” Bucky had been paralyzed. “[Now] the boy will live.” Bucky’s father, a doctor, signed. Al last heard from Braham in college. “He was playing baseball. You can’t ask the Good Lord for more than that.” Helfer never asked God for presence. It came, like manna, from above.

CURT SMITH can be contacted  at curtsmith@netacc.net

CURT SMITH is what USA Today calls the “Voice of authority on baseball broadcasting.” His newest book, The Presidents and the Pastime: The History of Baseball and the White House, was released this summer. He is a former Speechwriter to President George H.W. Bush, Associated Press “Best in New York State” radio commentator, and Senior Lecturer of English at the University of Rochester. Mr. Smith writes twice monthly for Gatehouse Media Newspapers.