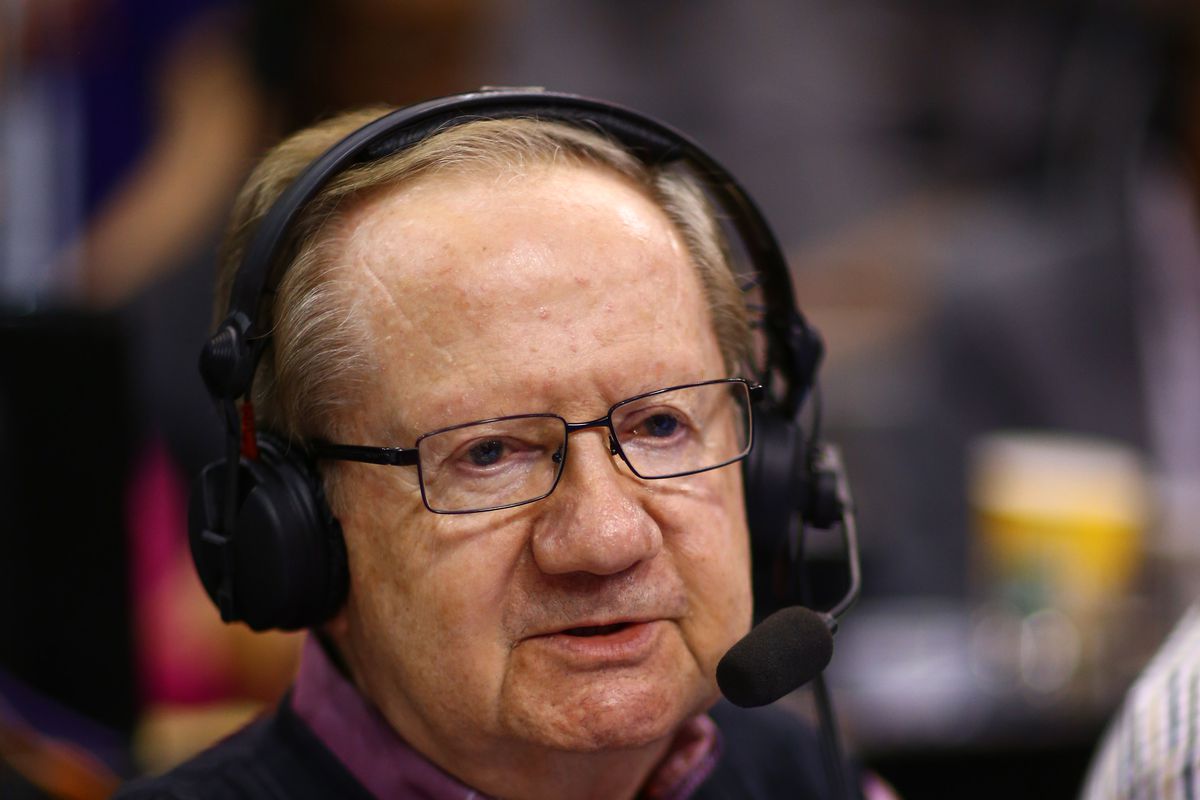 You have to be blessed, talented and lucky. And Al McCoy is all.

He comes from good stock. Both his parents lived into their 90s. His dad was 98 and his mom 95 when they passed. Al himself is in great shape and in solid health. At 88, his voice is in fine fettle and his mind is still as sharp as a Chris Paul pass.

“I still have the strength in my voice. I’m fortunate,” Al said yesterday from his Arizona home. “I spot check every one of my broadcasts and in fact listen to most of them. Just want to make sure I still have it.” He does. Very much so.

McCoy is a Phoenix institution. And Iowan, he arrived in the Valley of the Sun in the 1950s when Phoenix was a small outpost. From the time when Al arrived to today, Metro Phoenix has grown from a town of 500,000 to 4,500,000.

He has has done just about everything in the market. His first gig there was calling the Phoenix Giants Minor League baseball team and along the way, he did the Phoenix Roadrunners of the old Western Hockey League, Roller Derby on TV, Arizona State football and since 1972, the Phoenix Suns. For years, he presided over a Suns’ radio and television simulcast. So most of the soundtrack chronicling the Suns’ 53 year history is stamped with McCoy’s iconic sound. He’s to the club what Vin Scully was to the Dodgers, an unwavering voice.

McCoy has broadcast some of the biggest moments in team history. In 1976, the club, coached by the late John MacLeod, defeated the defending champion Warriors to advance to the title series against the Celtics. Al tells the story of the Boston press at the time, demeaning the Suns, “Who are these guys in cowboy hats and white socks who think they can stop the Green Machine?” The team was led by Alvin Adams, Paul Westphal and Gar Heard.

The series was tied at two wins when the teams played a classic triple overtime game at the old Boston Garden. Longtime NBA fans will remember that the Garden didn’t have air-conditioning and the place was packed in mid-June. The other thing it failed to deliver was security for the road team.

MacLeod and the players were frightened. The coach told the New York Times, “It was the most dangerous situation I’ve ever been in.” Meanwhile, McCoy was broadcasting on radio alone, sitting upstairs with a bunch of inebriated Celtics fans situated next to him. One fan actually passed out and fell right into McCoy’s lap during the broadcast! The Celts won the series in six games.

“This current team has its own personality. In ’76 no one even heard of the Phoenix Suns. In ’93 the Suns led by Charles Barkley and company were well known. Everyone expected them to be good. This is a surprise team. They all like one another. Not all teams can say that. At timeouts, after the coach shares his thoughts – one guy encourages the next. You don’t often see that. It’s a young team with good leadership. Monty Williams as coach, Chris Paul, a floor leader, Devin Booker is an up and coming perennial all-star and the fans are supportive,” Al said.

“People around the country shouldn’t be surprised by this Suns team. They had the second best record in the league and the best road record. They had a great season but just didn’t get a lot of recognition. Anything 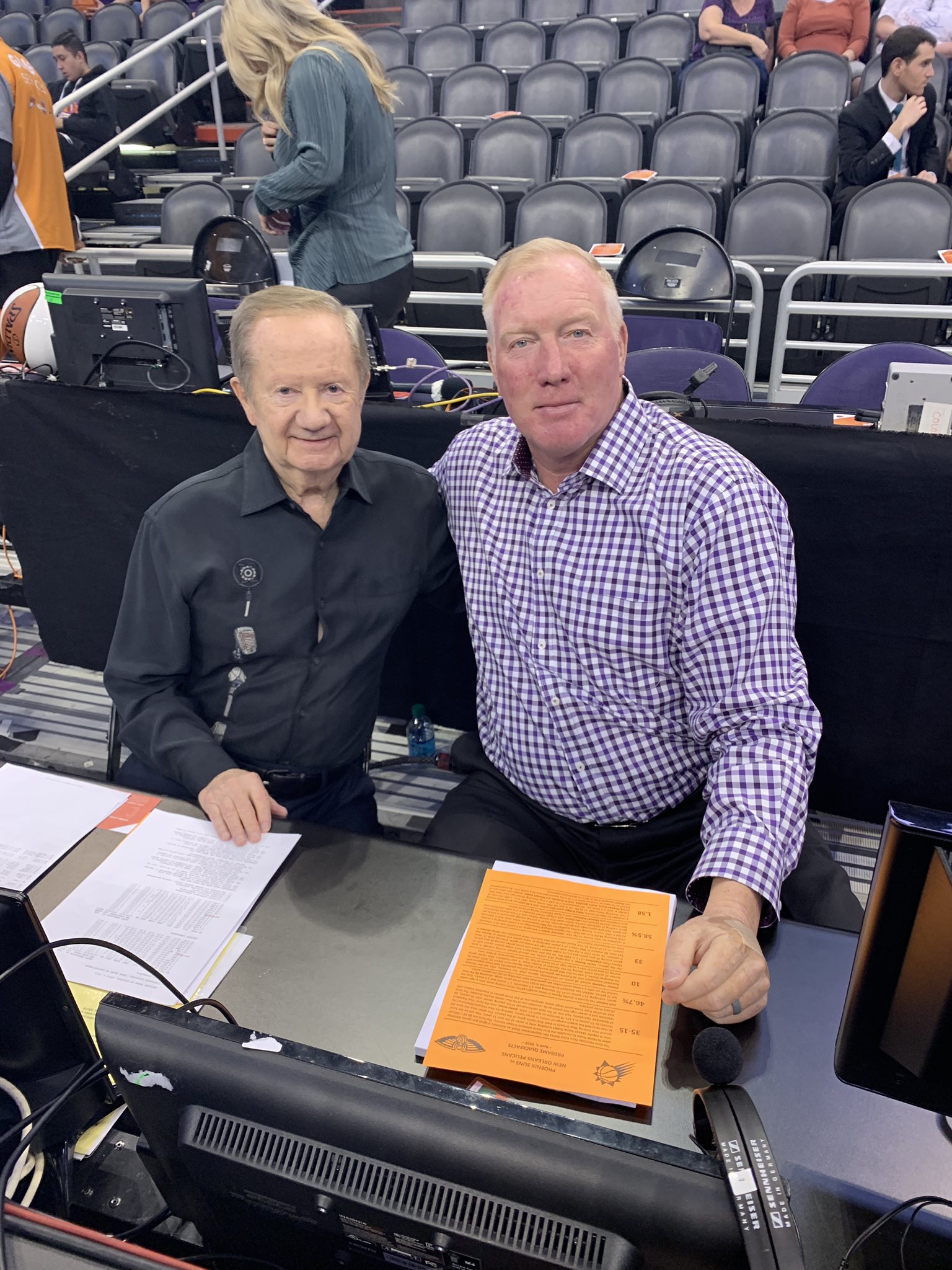 now is just icing on the cake,” Al told me yesterday.

There seems to be a sense of joy around the country now that the Suns upended the Lakers and knocked Lebron James out of the playoffs. James has dominated the league for years but the past couple seasons there’s a feeling that he complains too much. So when the Suns emerged into the second round, there were those who were delighted to see the team’s fresh and young faces.

How about broadcasting during Covid? McCoy says, “The biggest adjustment has been not being around the players and coaches. Having watched Suns teams lose as they have for the past number of years, it’s heartwarming to see them win. I’ve enjoyed following these guys because they play as one. There’s a togetherness. It’s very apparent.”

But for McCoy and other NBA broadcasters, Covid has changed the very way they broadcast. Al has gotten used to doing games from vantage points that he didn’t have to tackle before. He always had a seat at courtside. “We’re pretty high above the floor for the home games and we do the road games remotely. But it is great having fans back to energize the building.”

McCoy has spent enough years traveling with the Suns but misses the opportunity of getting to know this young team. “You’d pick up little anecdotes here and there that you can use on the air. That’s not possible now. We’d occasionally have lunch together with players or a burger after the game. We don’t do that anymore. So times are different. We’re not even allowed on the floor. It’s a red zone. But luckily, I’ve been around this franchise for a long time so I have stored enough anecdotes to share on a broadcast.” (Al and radio partner Tim Kempton, above.)

It doesn’t look like any of the team radio broadcasters will travel the rest of the playoffs. Apparently, teams have called the league to ask them whether they can send their radio voices on the road. The league said it’s up to them but that the announcers can’t travel on the team plane or stay in the same hotel. The league won’t even guarantee the road team a spot to broadcast. So for local team voices, the playoffs are turning into a sterile and isolated experience, removed from the action on the floor.

“Remote broadcasts are crazy,” Al says. “It’s especially challenging when the monitor goes out and we lose communication with the game. How many times can you say, ‘The Suns are moving the ball up’ hoping that the monitor will reappear and you can identify a name. It makes it a bit thrilling.”

“I did lots of baseball recreations in my early years in the Minor Leagues but calling games off monitors is new to me,” McCoy told me. “Some teams undervalue radio,” Al stresses. “The medium is worldwide now, I get occasional emails from the Orient and from Europe. People listen all over the world.”

I asked Al whether he’ll be back for his golden season next year. It would be his fiftieth. I was surprised by his response. “I haven’t thought about it. I won’t make that decision yet. The playoffs are keeping me busy. I’ll wait until everything ends and then give next year some serious thought. Doing the games 49 years has been great. If that’s what it is, I’ll end my Suns career with a smile on my face. But I’ll make that decision when the time comes.”

It’s interesting that he compares with Vin Scully in another way: When Vin got to a certain age, he would say it was year to year. One year, a fan who often sent cookies sent him some and she said, tell us you’re coming back. He held one up on the air and said since she asked him and the cookies were so good, he was coming back. So, Suns fans, find out what Al McCoy likes ….