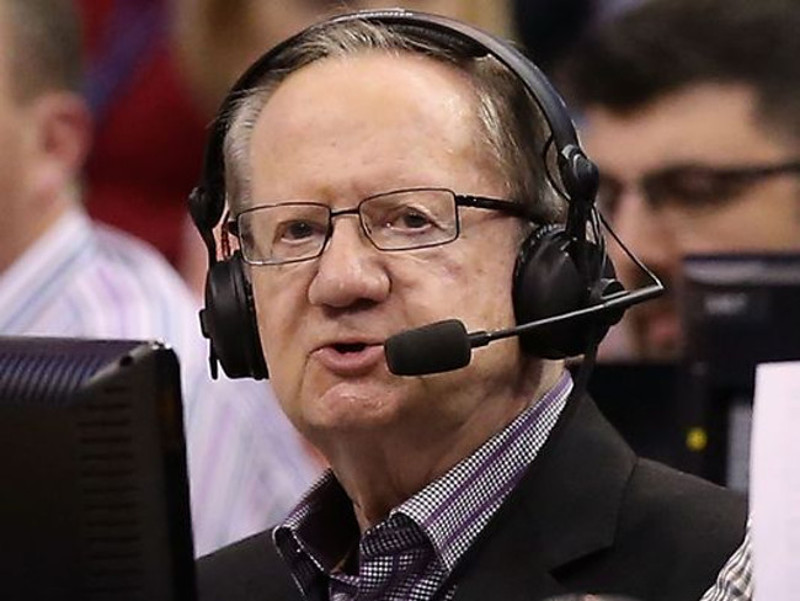 You won’t hear much criticism of Al McCoy. He’s not only been an institution in Phoenix for almost 50 years. He’s also been very well respected around the NBA since joining the Suns in 1972. A dean of sports broadcasting, Al is always welcoming and encouraging to new announcers.

In the team’s early years, McCoy handled more than just play-by-play. He had ad sales, production and station negotiations. He says the Suns were made up of 8 or 10 employees then and now it’s something like 200.

McCoy is a throwback in many ways, equally as comfortable broadcasting sporting events as he is hosting a music show or talking up longtime sponsor Sanderson Ford.

And for a man approaching his 85th birthday, he sounds like a man thirty year his junior.
Still, ask him about Harry James or Jo Stafford and Al can stir some interesting conversation of times many moons ago when he played the piano at nightclubs to put his meals on the table.

At a home game last year, McCoy was recognized to a rousing ovation when he joined the Suns’ ring of honor. As such, his name will live in eternity for his five decades of promoting Suns basketball in the Valley of the Sun.

He arrived in Phoenix in the 50s, did disc jockey work, called games for the minor league baseball’s Phoenix Giants, football and basketball for Arizona State and yes, hockey for the Phoenix Roadrunners of the Western Hockey League. It was then that a young man from Northern California knocked on his door, looking for a break.

Mike Lange badly wanted to call hockey on radio. He had nothing in his pocket and a love for the game in his heart. McCoy took him under his wing, initially had him do stats, then color and finally play-by-play. Lange later moved on to fame in Pittsburgh where he’s been with the Penguins since 1974 and has been honored by Hockey’s Hall of Fame. Lange credits McCoy for giving him his first break and launching his career.

Al, himself, was honored by Basketball’s Hall of Fame for his distinguished career calling Suns’ games. Al penned an autobiography, The Real McCoy, that reads in the soft and folksy twang, redolent of Al’s Iowa farm-town roots.

Basketball keeps broadcasters young. ESPN’s Hubie Brown turns 85 in September and the exceptional Ralph Lawler of the Clippers will be 80 later this month.

Al turns 85 on April 26th. His play-by-play call is still sharp, although he carps, and rightfully so, about the impossible vantages radio announcers are now assigned around NBA arenas.

Al shared thoughts with me recently:

ESPN occasionally has its play-by-play announcers in the studio instead of having them travel to the venue. Given the poor broadcast locations NBA teams give radio today, would you prefer the studio?

NO WAY! The NBA has to be broadcast live from a courtside position, not from a studio or up in the rafters. To do the proper broadcast and be on top of the game you need to be courtside.

You’re completing your 46th season as the Voice of the Suns. Your voice is in fine fettle.  Traveling an NBA schedule though is exhausting for a man half your age. When broadcasters Vin Scully, Ken Harrelson, Bob Uecker and Slick Leonard got older, they reduced the number of road games they broadcast. How much longer do you want to broadcast a full schedule? Have you thought of retirement?

My agreement with the Suns this past season was to have an option to miss a road trip or a game but my goal is to always call all games home and away. I don’t know what retirement means –  don’t feel ready for it.

For years and years, you simulcast, doing TV and radio. Do you miss it? Can simulcasts work today?

The Suns did simulcasts for many years. In those years, I would often check other teams’ telecasts and I felt that our simulcasts were better than most. Fans liked them because we talked about the game (to serve the radio audience) not about where we were playing golf or going out to dinner. However, now that former players are doing color, simulcasts probably would not work. (No NBA team does simulcasts anymore.)

Radio is a play-by-play medium. In a world of short attention spans, does radio need color commentators or are they extraneous?

Doing games on radio, I like having a color guy. I think that hearing just one voice on a nearly three hour broadcast is a little much. Analysts provide another voice and help on pre and post programming. I have worked both with and without an analyst and would prefer to have another voice with me.

Five decades in the NBA! From 1972 to today, the game has changed drastically.  What are your thoughts?

The biggest change is that teams today draft players out of day care centers. It has effected the pro and college game. Not for the better.  Also, the 3 point shot has been the biggest change in how the game is played.

From John MacLeod to Cotton Fitzsimmons, the Suns have had some good coaches. Which of them did you enjoy being around most?

With the Suns, I have enjoyed a great group of coaches. In addition to MacLeod and Fitzsimmons, we’ve had Mike D’Antoni and Alvin Gentry.

You’ve had some colorful players starting with Charles Barkley. Who were your favorites?

The Sun have had some of the very best.  Where do you start?  The original Sun, Dick Van Arsdale. After his playing days, Dick worked with me on the broadcasts for 15 years. We had  Hall of Famer Connie Hawkins, one of the league’s greatest. Then where do you stop? More Hall of Famers, Jason Kidd, Steve Nash and Dan Majerle. Then, yes, Sir Charles Barkley.

Other players come to mind, Kevin Johnson and Tom Chambers. I could go on and on.

You’re a bit of a renaissance man. You’ve hosted music shows. You play the piano and you’ve done all sports. When you were a kid, the NBA was hardly an embryo. What sport did you dream of broadcasting and is there anything else in your long career you wish you had done?

When I was growing up on a farm in Iowa, baseball was the big game on radio. The first announcer that I followed was Bert Wilson, the radio voice of the Cubs. I also listened to Cubs’ and Bears’ broadcaster Jack Brickhouse and of course Harry Caray in St. Louis. I followed them all; Don Dunphy on those great championship fights and the dramatic Bill Stern. Yes, I was a radio buff, lived by it and followed sports and the announcers who broadcast them.

Who was the better clarinetist Benny Goodman or Artie Shaw?

My professional goal was to become a sports broadcaster. My second choice was maybe to be a singer with one of my favorite big bands:  Harry James (trumpet), Woody Herman (sax or clarinet) or Tommy Dorsey (trombone). Who knows? You might never heard about Frank Sinatra!!

As for Goodman and Shaw, I think Benny was probably the better player. Oh, Artie Shaw had his way with beautiful women. That might give him the edge!! (Shaw was married eight times).

Wonderful profile and interview with a great broadcaster and
a greater man. Al McCoy is everyone’s all-time favorite!

As a fellow NBA play-by-play broadcaster, Al has always kind and helpful to me over the years. And he has also fought diligently to improve the broadcast positions in the league arenas for us radio guys. I join many in hoping he never retires!

I’ve had the pleasure and honor to have worked alongside Al as his Producer & Director for our TV & Radio simulcasts for many years. There is no better broadcaster on the planet – and more importantly Al is even a better person! He’s simply the best. Thanks for sharing his profile and interview.

I have admired Al McCoy for many years. He is, without question, an outstanding practitioner of the play-by-play art. Al is an expert in holding an audience after he attracts them. His audience is made up of people from all over the country, as so many people visit Phoenix as a winter getaway. Fans of other NBA teams are comfortable listening to Al, as there’s something for everyone in his broadcasts. The Basketball Hall of Fame could never be complete without Al enshrined there. But as fine of a broadcaster as Al is, he is an even better person. It… Read more »