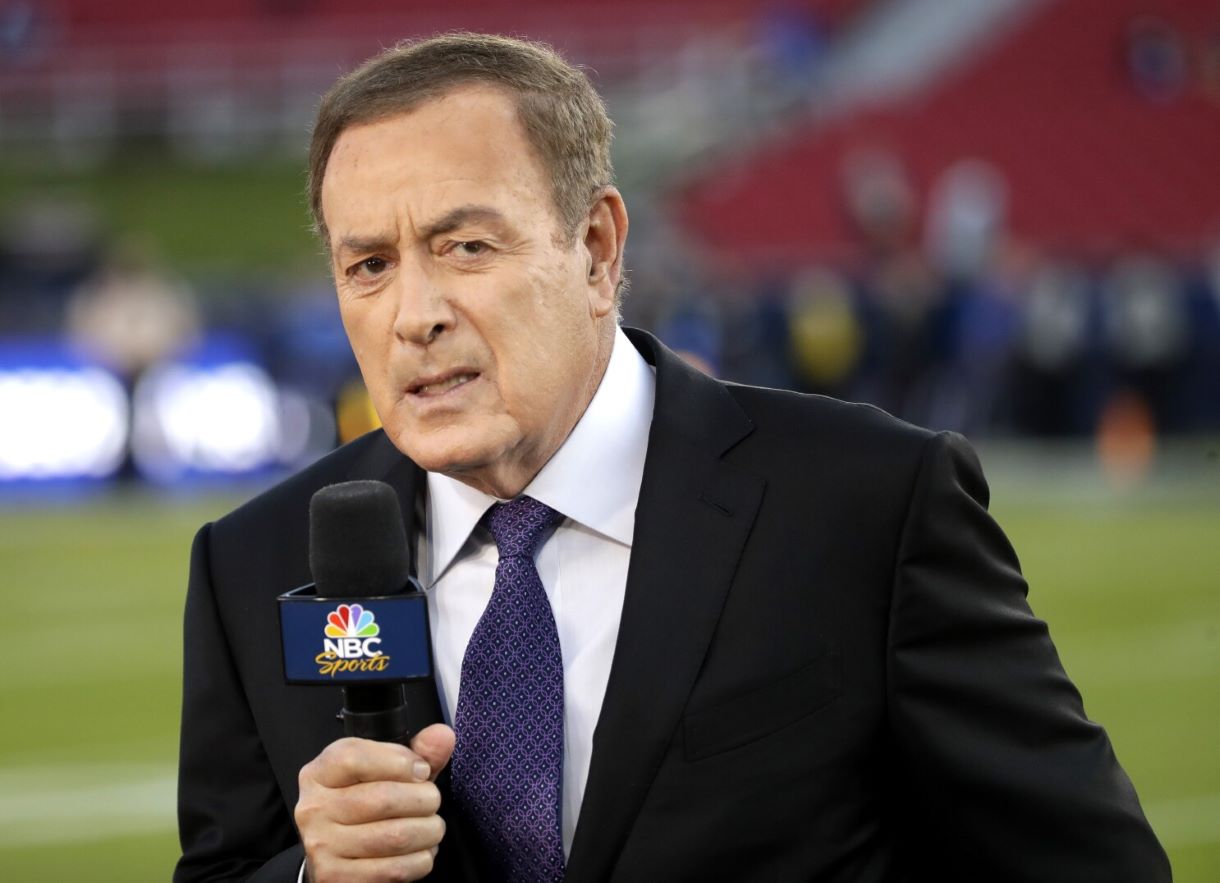 On Sunday, Al Michaels will nonchalantly pick up the NBC microphone in Southern California and call a football game like it was any other, during his sparkling, nearly five decade career, a stretch that will include 11 Super Bowls. When he and Cris Collinsworth complete their open, they will settle into the booth and call the game insouciantly. Nothing particularly rattles  Uncle Al, America’s sportscaster. And on Sunday, he becomes the oldest to serve as the luminary behind the powerful TV event.

This could be Michaels’ last Big Game. His contract ends after the Lombardi Trophy is awarded. For Al, it’s been a long and fruitful career. Fifty years ago, he did a World Series on NBC with the esteemed Curt Gowdy. CBS’ and Fox’ Pat Summerall also did 11 Super Bowls but Pat was an analyst too three times, once with Jack Buck and two with Ray Scott.

Michaels will be as prepared as anyone. The Brooklyn born sports fan grew up not far from Vin Scully’s abode, Ebbets Field. Al certainly appreciates the enormity of the Super Bowl’s worldwide stage and may give the huge telecast a little extra spice. But don’t count on him for a gushing of mustard. An apt story, you bet! But he’ll temper himself. He always has.

He won’t steer the game where he’s unsure it will go. No false promises or hopes. He told me a couple times that the Bowl is so huge and because everyone knows so, there’s no need to tout it further or butter it up to attract more watchers. Still, Michaels, Collinsworth and Michele Tafoya will hold your hand through the game and won’t overdo it. In fact, most of the time you won’t even know that they’re there.

Michaels’ successor next prime Sunday night season will be Mike Tirico, an accurate, unopinionated, generally flat and a slightly better than average play-by-player. Yes, satisfactory. He’ll shepherd you through a telecast and won’t let go. Mike, 55, was only 4 years young when Michaels did his first MLB broadcast on NBC in 1972. Standing next to Gowdy for the open, Al said to himself, “Please God. Let the words come out of my mouth.”

By pre-arrangement, Al knew that NBC was about to turn over the reins to Tirico and that his long NBC chapter would end. When he signed with NBC last, the Peacocks said to him in essence that Tirico is the heir for SNF.  But instead of playing out his career disarmingly, Michaels kept getting stronger. His gumption, energy and passion were palpable. His aspiration didn’t temper. More importantly, there was never any decline in Al’s aptitude. No loss in sharpness.

It was beginning to look like Tirico for Michaels is like Joe Davis for Vin Scully. There’s something glaringly missing in Mike’s lack of consistent flow and style. Tirico did the riveting Cincinnati-Vegas game which like so many of the early playoffs this year went down to the last play. Viewers knew of all the Bengals miserable failures before kickoff. All those 31 years! The frustrations and the struggles, coach after coach, one draft pick after another. Anyone tuning in knew all this. Still, Tirico, kept dwelling, harping and hammering home like we were all born yesterday. Tirico’s call was borderline sophomoric. Are the viewers fools? Would Nantz, Buck or Michaels call a game that way?

So this is Al’s replacement? Successor is a more fitting word.

Michaels didn’t like working with two analysts in the booth and hasn’t in twenty years. Especially today with so many promos, replays and graphics. ESPN is still heavily married to an overweight booth. In a discussion one day about multi-voices, Scully once described being part of a golf broadcast crew. “You have to maintain a mental bookkeeping of whose turn it is is to speak.”

Al can latch onto ESPN and the Mannings. While it would be intriguing and enticing, the siblings would drive him out of his comfort lane with something that’s not standard. Much of the talk is of Al becoming the cynosure of the  Prime package by Amazon. Last November, the now Californian turned 77. He’s still as sharp as a nail. If he lands at ESPN, Al will call another Bowl game.

One thing from my perspective, NBC’s broadcast decision smells of failure. Michaels and Costas for Tirico has a stench. It’s a failed trade. And NBC is paying Tirico more than Al and Costas. Make any sense? Not to me!

The problem with citing Joe Davis as Vin Scully’s successor is that he isn’t entirely. He does only TV, while Vin simulcast on radio after all those years of being almost completely on radio. Throw in that Orel Hershiser does the color (or a fill-in does) and it’s a different broadcast in enough ways to take some of the heat off of Davis–with whom Dodger fans seem quite happy. I also have the odd theory that Ross Porter succeeded Vin. He was hired to be the main announcer on about half the games, and had to suffer from the inevitable… Read more »