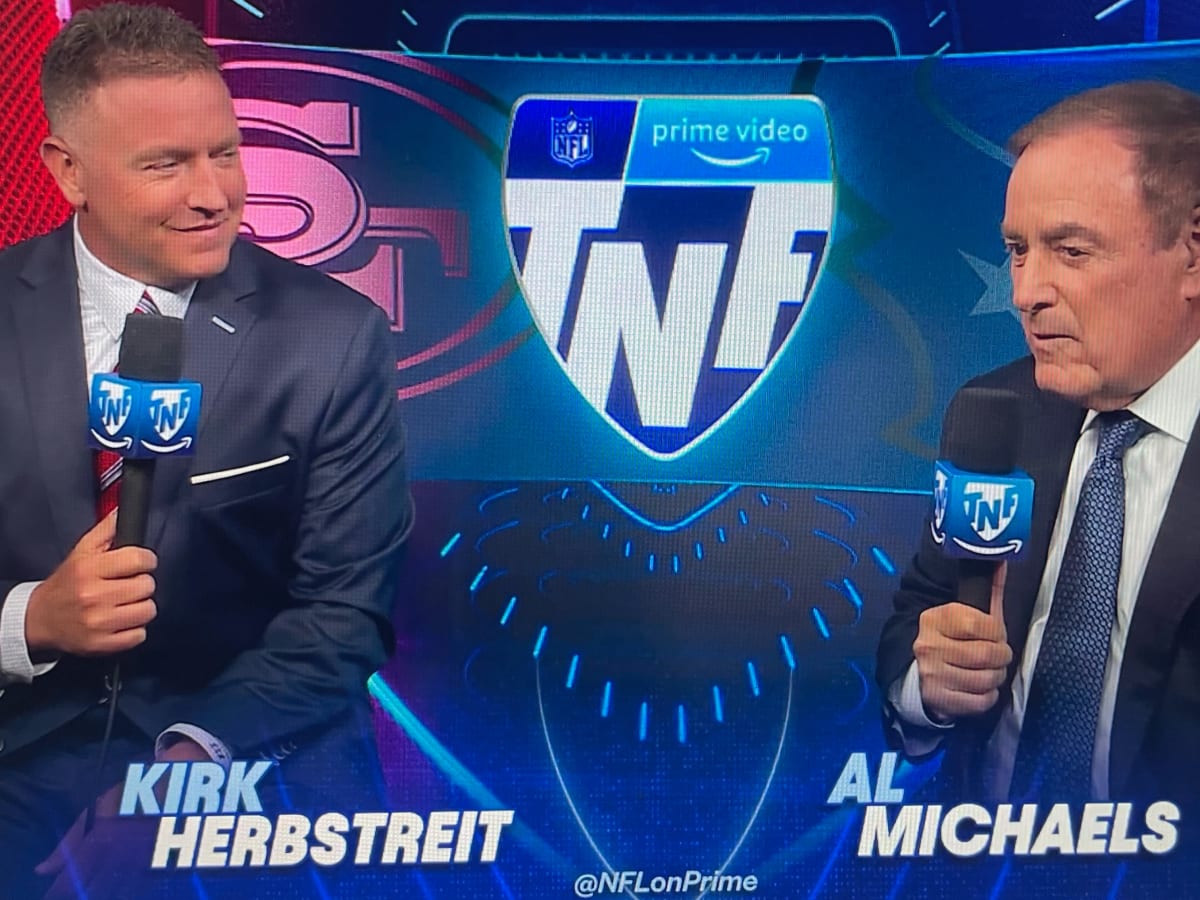 But why in the world is Herbie drooling in an NFL broadcast booth? It’s bad enough that Herbstreit still dribbles every weekend on ESPN’s college broadcasts.

Teaming him with a master, among the best ever, Al Michaels? I don’t understand the rationale.

Frankly, Amazon has some explaining to do to the American viewing public. Can his unending verbiage survive in the NFL and its millions of TV fans? Only time will tell.

For a haughty man who truly believes he’s the single best football analyst in America, be it college or the NFL, Herbstreit isn’t off to an overwhelming start. Yes, he can sound knowledgeable, educated and articulate. But in my humble opinion, jumping endlessly as he does, over Al Michaels, takes audacity and terrible disrespect on Thursday nights. The man needs to shush!

When this dual assignment was announced in late spring, I had a sense it would be a challenge for Al. Herbstreit had showed little respect for his first prominent partner Brent Musburger. Still, today, on ESPN, he pushes Chris Fowler around like a toy car, on the network’s college-casts.

Al blends a mix of talent, 50 years of time in NFL grade, grasp for the league rules, command of the language, a predictable flow, a pleasant voice and doesn’t overdo things. Herbie couldn’t shine Cris Collinsworth’s boots. Al and Cris would kid around and laugh.

Kirk had to report every note he prepared. Enough already, bud. Respect your partner. Four decades of primetime. Last time I looked, you’re an NFL rookie. Herbie, let the game come to the viewer. Stop yakking.

So far he’s been no more than a used car salesperson. The man who wants so desperately to have himself designated himself football’s new best all-around analyst, albeit he’s no more than a newcomer.

I received this unsolicited email from a retired NFL network play-by-player. I print it here for our readers with his permission.

I share your view of the guy working with Al Michaels. Surely, some producer with authority can get into (Herbstreit’s) ear and say: ‘You’ve got the job. You don’t need to show me and the world how much you have prepared.’ I was stunned to see and hear, that he is also still doing college ball. Holy crap, when is enough enough?”

Herbstreit ! —We saw the play, Al told us what we needed to know….Telling us “why” doesn’t need to be a treatise showing off your “expertise.” I don’t know if Al weighed in on motor-mouth’s Kirk’s selection—Surely with the money that Thursday Night Football is paying Al, he should have been consulted as to who sits next to him. Now he needs ear-muffs—and so do we !!!!

What makes a good play-by-player? You’ll invariably be told by the best of voices, that they must take the lead to succeed. There’s one leader and one follower. The play-by-player tells you what and the analyst talks why. But Kirk talks in circles.

I had some gabbers among the multi-sports I called, different folks for NFL and NCAA. All of them were happy to have me give them counsel on how to get in and out with their expertise.

Other notes regarding the subject:

Bottom line, the rookie has to step it back and rethink what he’s doing.

Lindsey Nelson once mentioned an anonymous play-by-play broadcaster who would put his hand over the analyst’s mouth. Alfalfa might want to think about that one. He’s around 78, but I think he could handle Herbie if he had to.

It’s interesting that Michaels worked so well with Madden because Madden, more than anyone else, led to the problem that Herbstreit exemplifies: The analyst getting too much space. Madden filled it, and well, but he also could mesh with the play-by-play man, and Michaels knew enough to know how to work with him.