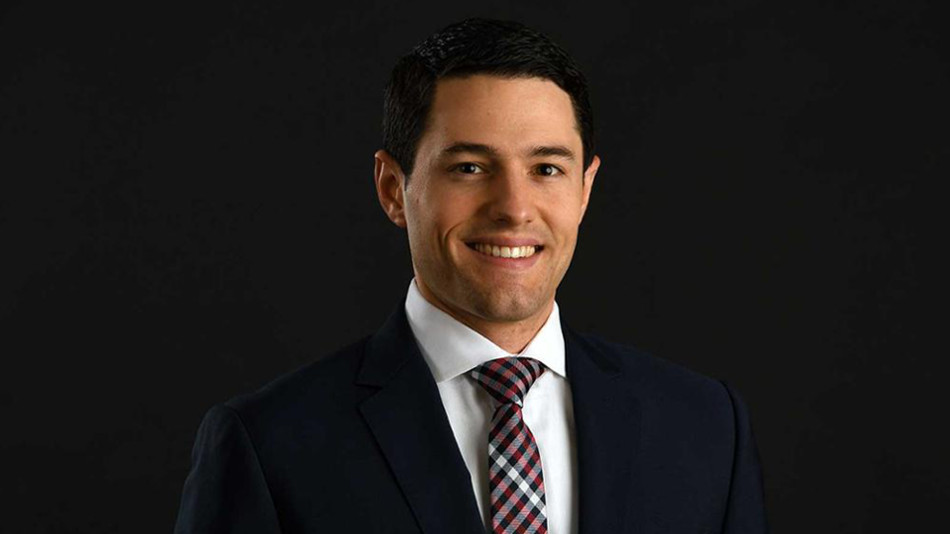 Could you imagine for a moment if you were a contractor for a few years building decks and homes for the everyday family and suddenly one day, as you’re continuing to hone your craft, you’re approached by a multi-millionaire who saw your work and hires you to build the largest home you could imagine.  Think it couldn’t happen?  It did in the world of NHL broadcasting this past off-season when Alex Faust was hired by the Los Angeles Kings as their new play by play announcer for their TV broadcast.

Make no mistake; Faust has earned his stripes and then some.  Though he’s only 28 and graduated from Northeastern University in 2012, Faust knows hockey and now is the youngest play by play announcer in the league.  He’s toiled in arenas large and small, continually knowing and working at what his ultimate dream path was in the hockey broadcast business.  In short, he left no stone unturned.

There are some in broadcasting who are just destined to “get there early.”  Seasoned professionals like Bob Costas and Jim Nantz were once looked upon as those young guys who seemingly took command from an early age and never let go.  Faust has an assertiveness, command and likable confidence about him that separates him from most young people, let alone being the man who took over for Kings legendary play by play man Bob Miller, in the nation’s second largest TV market.

Here are Alex’s responses to questions we asked him as he finishes up his first regular season with the Kings.

You’re following an NHL broadcast institution. Bob Miller. He was there 44 years. How daunting is it to fill his big shoes?

What’s this and big shoes everyone keeps worrying about? I wear size 11! But in all seriousness, last summer was a whirlwind, and the magnitude of this opportunity didn’t dawn on me until mid-January this season, when the Kings unveiled a statue and banner for Bob at Staples Center. That night was the first time I sat back and said “Wow, this is a really big deal.” Up until then, I was just trying to worry about the next game, or the nuts and bolts of the job. At the same time, I’ve tried to make the job my own, both with my own style and substance. It’s not easy being an NHL rookie, but the glare of the LA market certainly adds a level of scrutiny.

Your degree from Northeastern is in political science and economics. After graduating, you spent 4 years as a business consultant. Analytics are part of your game. Do you incorporate more statistical data into your broadcasts?

I try to, but at the same time there’s only so much you can use in a broadcast – especially with hockey. There’s lots to digest with a fast-moving sport and fast-moving telecast. This is particularly tough since there hasn’t been a clear consensus on the most important benchmarks. A few years ago, CORSI, Fenwick and similar possession measures were seemingly on the minds of every front office. Now, it’s things like zone entries with possession, shot quality, etc. which are kept privately by teams but harder for us to use on broadcasts. My hope is to continue to push our broadcasts towards using advanced stats, but it has to make sense and be digestible for the audience for me to feel comfortable talking about it.

In the industry, Syracuse’s Newhouse is part of the fabric but your alma mater, Northeastern, has turned out many well-known sports broadcasters, including the legendary Fred Cusick,  Will McDonough (Sean’s dad) and Don Orsillo, San Diego Padres PBP to name a few.  What’s Northeastern doing that we don’t know about?

I don’t think there’s any secret sauce to Northeastern, but it helps that the university has always stressed the value of hard work. Culturally, at NU you’re expected to carve your own path, to be a self-starter, and to develop professional relationships. Experiential learning is the backbone of the institution, and the access to do play-by-play for major sports makes it easier to get reps at a young age.

Obviously you’re young.  It feels a little American Idolesque that you essentially bypassed “the ladder” and have now reached the big stage so quickly.  Have you had any pushback or at the least perceived pushback from within the establishment of more seasoned broadcasters who sometimes have honed their craft for years to get to the position you now hold?

I haven’t felt any resentment, but I could absolutely empathize if there was. I try to take stock of this incredible opportunity by looking at it as a two-way street: I believe I call hockey at a high level, and the Kings wanted someone who could grow with the organization. In that sense, the stars aligned. I’ve been a freelancer, so I know how it feels to try and figure out where I fit vis-à-vis other announcers. But if this business teaches you anything, it’s to focus on what you do well, work hard, build relationships, exercise humility, and eventually good things will happen.

Bob Miller represented a vibrant presence for decades, he was not as flashy on-air as Chick Hearn and he certainly didn’t have the flowery command of Vin Scully. How would you best describe your style?

It’s still evolving, to be honest. I’m much more conversational in my delivery, and I don’t use as much directional guidance as Bob (left/right, near/far, etc.). Don’t forget, Bob called hockey on radio for nearly two decades with the Kings before the TV and radio broadcasts were separated into different feeds. I think everyone was captivated by Vin’s storytelling and admired Chick’s panache. Ideally, I’d like to have a bit of flair and tell a few stories, but I made a promise when I took the job: no gimmicks, no shtick.

You’re an East coast guy.  How did you adapt to life and hockey in LA and essentially sell yourself to that market after Miller’s incredible run?

First and foremost, I sold myself as a hockey guy. I wanted to be in the NHL – this was a career goal of mine. Though the opportunity came earlier than I anticipated, calling hockey was always the target. I made it clear in the interview that I wasn’t Bob. I wouldn’t have stories of Jack Kent Cooke’s reign as Kings owner, I wouldn’t be able to spin a yarn about the Miracle on Manchester or the frenzy after the Gretzky trade. But I hoped I could bring a fun, young, engaging personality to the table. As far as life in LA, I’ve got sunshine, blue skies and 70 degrees when I walk out my front door. Need I say more?

When you’ve talked to other veteran broadcasters around the league, what kind of advice did you get?

It’s been fun to meet all the other play-by-play voices in the league, and while we’ll occasionally talk shop, I’ve leaned on our own Hall of Fame radio broadcaster, Nick Nickson, for advice on how to cut through the clutter to get a stat or anecdote that the audience can latch onto. There’s a wealth of information out there, but picking out the right information, and knowing where to look, can save a lot of time and give something memorable for the viewer at home.

From an NHL perspective, which announcers did you listen to while growing up and was there a role model that you hold in high regard in the industry?

I’ve always loved the style of Ian Eagle or Mike Tirico: versatile, fun, engaging and smart about their craft. Both Ian and ESPN’s Jason Benetti have been so kind sharing their insights on the nuances of this business. Specific to hockey, John Forslund (Carolina) is, in my opinion, leads the way for how he describes a game.

You’ve done many sports. Your early experience was not limited to hockey. What did you do in your job interviews to sell the Kings on your passion for the game?

My work in other sports helped me get a foothold in the industry. There’s a tremendous amount of college football and basketball on TV, hockey not so much. I called games part-time for the Utica Comets AHL team, did college hockey on NESN and NBCSN, and I can’t express enough how much joy it brings me to call hockey. To the extent I was able to portray that joy in the job interview, I made it clear this is what I want to be doing for the rest of my life.

Announcers are commoditized today. There are so many events on television. It’s difficult to distinguish one from the other. How do you hope to give yourself a special signature?

I think it’s a bit easier with a local team to carve your own niche, because people live with you for six or seven months out of the year. I would hope that my voice (to the extent it’s distinct) can help me stand out in this sport. Better yet, I hope that by not using a catchphrase or signature, to keep you on your toes and not know what I might say to capture the moment, you’ll want to tune in.

The great Mike Emrick provides an almost radio call on television. Do you paint the picture or caption it?

I would actually disagree with that statement. Doc actually takes the visual medium of TV and uses diction to capture the moment. A radio call, in my opinion, accentuates the location of the puck. Is it in the near corner, in the right circle, high slot, at the hashes, at center ice? Instead, Doc uses verbs to capture the constant action.