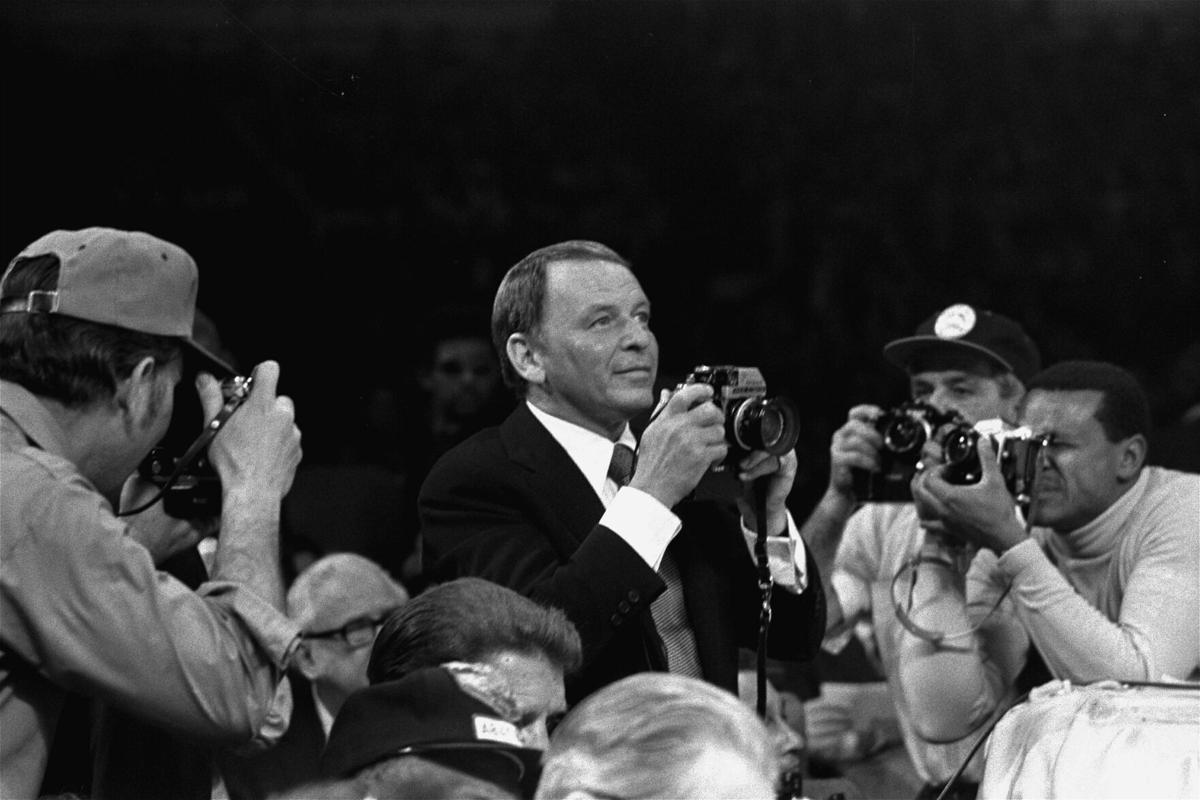 Life Magazine scored a press pass for Frank Sinatra who was ringside snapping away. Meanwhile, Frank got a little attention himself.

This morning, Bob Costas reflects on the Fight of the Century, the rumble that pitted Muhammad Ali against Joe Frazier for the world heavyweight championship. Ali-Frazier I was fought fifty years ago tonight at Madison Square Garden.

In part four of our four part series on the gripping fight, Bob reaches back half a century to the night when he was a student at Syracuse University. He shares his memories of what was arguably the single biggest sporting event in American history. Ali-Frazier I transcended sports.

The rumble was tinged with emotion. Those who rooted for Ali saw him as a proxy for political reform and racial equality. Others saw him as a draft dodger who stirred the pot. Opponent Joe Frazier was seen as the status quo. He limited his fists to the ring. 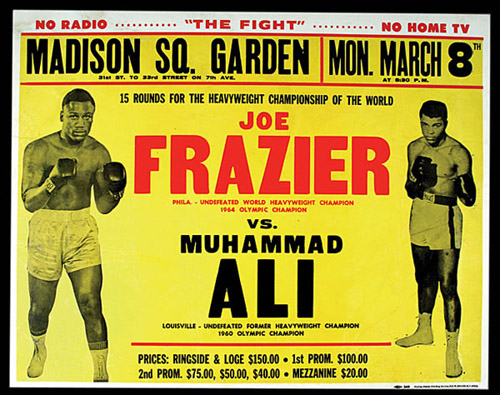 Tim Ryan called the tussle on radio for New Zealand and for members of the Armed Forces, most of whom were fighting a much debated war in Vietnam, then North and South Vietnam. (There was no commercial radio broadcast.)

In his autobiography, On someone else’s nickel, Ryan described what The Garden felt like the night of March 8th 1971. “It had the mix of a sporting event, a Broadway opening and an Oscar Night, drawing people from every walk of life.”

Madison Square Garden Boxing’s initial goal was to promote and manage the fight itself. It offered the two fighters, $2.5 million to be shared equally. Managers for the fighters and MSG Boxing were ready to come to terms when at the eleventh hour, a promoter, unknown in boxing circles, offered the pugilists $5 million. The bid came from Jerry Perenchio, a Hollywood agent who represented a roster of stars like Kirk Douglas, Burt Lancaster and Andy Williams. The money man was Jack Kent Cooke, owner of the Lakers and Kings. Up to that point MSG thought its biggest competitor for the fight was the Astrodome in Houston, the Eighth Wonder of the World.

Luckily for MSG,  the fighters and their handlers appreciated history. They insisted that Perenchio make a deal with The Garden to house the fight. It’s exactly what happened and The Garden’s share of the take was limited to a percentage of the ticket revenue.

The New York Times reported that the fight generated $20 million in revenue and approximately $1.5 million in profits. Perenchio had squeezed every last dollar of the sizzle and anticipation that preceded the rumble.

Bob Costas, For forty years he was the face of NBC Sports and the primetime host of many Olympics. Here, he paints a picture of the night and the fight and how Ali-Frazier gripped America and beyond.

I was a freshman at Syracuse. The buildup and anticipation for this fight was off the charts. Two undefeated Heavyweight Champions, both very well known to the entire public, not just boxing fans. It was very different from today, when the vast majority of Americans have no idea who the Heavyweight Champ is, nor do they care.

Ali was a transcendent figure. A beautiful, stylish and exceptionally gifted fighter blessed with a charismatic and entertaining personality. But beyond that, his bold and courageous political stances had made him a hero to many (including it should be said, young, liberal minded white kids like myself), and an object of scorn to others. This was the polarizing Ali, not the nearly universally respected and admired Ali of later years.

He had been barred from the ring for three years, at the peak of his career, for refusing induction into the military. Many viewed him as the ‘Champion in Exile.’ Returning now to reclaim what was rightfully his. Others viewed Frazier as the guy who would shut Ali’s “Big Mouth.” So the fight carried major political and social overtones.

But just as a boxing match, it was great theatre. They were both genuinely great. And as they say, “Styles make fights.” George Foreman destroyed Joe Frazier twice. And if they fought ten times, Foreman would win them all. But while Ali found a way to beat Foreman, and Foreman/Frazier would always be a mismatch, Ali/Frazier would always be close. Contrasting styles, each with abundant heart and will.

I spent $5 to see it on closed circuit at the Loew’s Theatre in Syracuse. They say the atmosphere at Madison Square Garden that night was beyond electric. But even some 250 miles away in a theatre in Syracuse, you could feel it. The crowd at the Loew’s was predominantly Black. And most favored Ali. I was rooting for him too, but felt not only admiration for Frazier, but sympathy. He was a great fighter and a good man, but not nearly as profound a figure as Ali.

Given the climate of the times, he was cast as the “White Man’s Champion” and Ali as the “People’s Champ”. There was some truth in that, but through no fault of Frazier’s. The characterization hurt him deeply. He was ill equipped to answer Ali verbally. He would have to make his statement in the ring. He was fighting for his pride, his dignity, his brutal but honest craft.  Ali was fighting for all that.. And more.

As the fight unfolded, I honestly thought Frazier was winning. But if you closed your eyes and just listened to the audience reaction, you would have thought Ali was ahead.

As Vin Scully often noted “Fans tend to see things with their hearts.” When a perfect left hook from Frazier sent Ali crashing to the canvas in the 15th and final round, it was an exclamation point for Joe. But Ali made a point of his own by quickly getting up. There were cheers for both in that moment. Frazier rightfully won the decision. Much of the Loew’s crowd booed. Scully would have understood. I left with increased regard for both men. And with the memory of an event that even in a theatre, seemed as imbued with excitement, passion and meaning as any I have attended or covered in person.