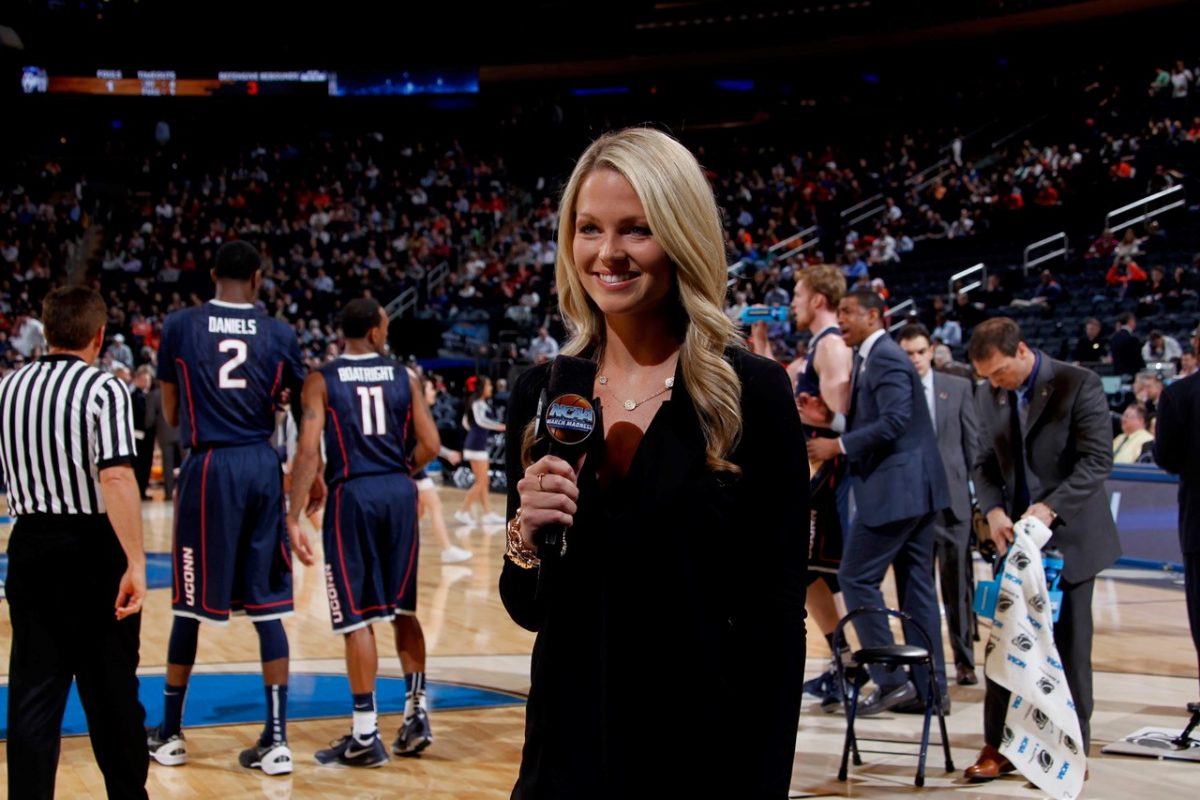 Lesley Visser is a pioneer. She broke through television’s firewalls decades ago when the very thought of assigning a woman to a sporting event was considered blasphemous. Among today’s newer generation of women on sports television, Visser is considered an icon. So Leslie knows what it takes.

“The first time I met Allie Laforce, she introduced me to her parents, Lesa and Wade LaForce. Look no further. We probably don’t give enough recognition to the parents of emerging or great announcers. Allie’s parents are what she is; warm, smart and kind.”

Growing up in a nurturing yet demanding home, Allie was well taught. At 26, when many broadcasters are pursuing their first break, Allie had already advanced from a television station in Cleveland to the lofty stage of CBS. She did so with grace and aplomb.

At CBS, her primarily role was working the sidelines for the network’s telecasts of SEC football. She started in 2014 when Verne Lundquist was presiding over the play-by-play microphone. Then, this past summer, Allie moved to Turner where she covers the NBA as well as the NCAA Tournament. “She’s always prepared, with both questions and perspective, which is harder than it looks,” Visser says.

The preparation element was evident the other night at Golden State where LaForce was on the sideline for Turner during the Houston-Golden State playoff game.

A few minutes after James Harden went down with what appeared to be a pretty serious eye injury, Allie was called upon by play-by-player Kevin Harlan to provide an update. Harden had been poked badly in both eyes and LaForce was right on it. She gathered the facts and told the audience that Harden had a lacerated left eyelid. Needless to say, damage to a cornea can badly alter vision of any sort. So concern ballooned.

At that point, Harlan did something you don’t see on these national telecasts. He asked Allie a follow up question. And within time, Allie reported that Harden was bleeding from an eye.

Generally, sideline reporters function on their own limited island where they’re allotted meager time. The rule of thumb is observe, share and send it back to the play-by-play position. The announcer then says thanks and that’s that. Kevin, thinking instinctively and proceeding against convention, asked Allie for more detail. He knew he can count on her.

Visser who still works for CBS says, “The viewer can recognize any reporter, male or female, who does it well. At CBS, we were so lucky to have Allie LaForce. With a little luck, more like Allie will come along.”

Allie is married to Joe Smith, a relief pitcher for the Houston Astros.

Between NBA playoff assignments, Allie was kind enough to do a Q & A with us.

You were somewhat of a prodigy.

Prodigy is giving me WAY too much credit! Thank you, though.

What did it take?

I believe my success has been a combination (in no particular order) of hard work, timing, playing sports, and the way my family raised us.

Give us a quick profile of the early years.

In order to be on the network stage in my mid-twenties, all of that needed to happen. My mom grew up on a dairy farm with six kids. They had us play EVERY SPORT, working a “real” job when we weren’t playing sports, and setting an example of what hard work really meant. I played four sports in high school and walked-on to the basketball team at Ohio University – all while serving a stint as Miss Teen USA, graduating early and writing an undergraduate thesis on women in sports.

Your dad Wade played football at Wittenberg and your mom Lesa played tennis at Kent State. What did you pick up about sports from them that continues to serve you as an evergreen lesson?

Competition, teamwork and sacrifice are three things we have all learned from sports that apply to EVERY single facet of life. My parents love competing, love people and have sacrificed their whole life for us. My Aunt Connie also lived with us when I grew up and she was a varsity basketball coach. I wouldn’t have gotten the gigs at Sports Time Ohio if they didn’t trust my basketball knowledge from playing the game.

How did you get into television?

I first produced and hosted our football coach’s show, “Bobcat Blitz,” reported live for high school football on Friday nights, and traveled on the days I wasn’t working to MAC games for our regional Ohio station, Sports Time Ohio, now Fox Sports. It was A LOT. I never stopped working, even for a second. That is the way my parents raised us.

From there, I volunteered at Fox8 News in Cleveland. Sonya Thompson gave me a chance to get stories on the air and, if I was able to turn them in on deadline each day, they would air. Once they started trusting my work, they paid me per story. Then eventually I was offered a full-time contract. The luck part comes in because CBS Sports Network (cable) was JUST starting. They needed a host for a nightly show with Doug Gottlieb. A friend sent him my YouTube reel. Then, my current agent, Nick Khan with CAA, believed in me and flew me out for an audition. I got the job.

You were a Miss Ohio. I would have to imagine that training for beauty pageants taught you how to carry yourself and to exude confidence. Did it help you get ready for television?

My mom owns a modeling agency in Atlanta, and has for the last 30 plus years. She commutes every single week from Ohio to Atlanta and back. So every time we got a new outfit growing up, she would make us put it on and she would have my dad wait downstairs on the couch and she would say, “INTRODUCING ALLIE LAFORCE!” Haha! I would have to model it.

What was cool about her is she didn’t even teach me how to do makeup until I did Miss Ohio Teen USA and Miss Teen USA. She threw me in blind, to work on both my confidence and interview skills, and have a good time. With her training, and once again LUCK, I won on my first try. The skills I developed from the pageant world I use every single day. How to manage stereotypes, how to be in the public eye 24/7, how to travel, etc.

From CBS Sports Network to over the air CBS Sports?

It all fell into place when Tracy Wolfson went to the NFL and the SEC gig opened up right after I started at CBS. Timing. Luck. Hard work. Family.

They are SO DIFFERENT. The games themselves are completely different. In college there are more sets and more emotion on a game-to-game basis. In the NBA the skill level is so much higher and so is the understanding of the game. NBA playoffs are amazing. March Madness is my favorite month of the year. They both have their pros and cons

You’re given a couple questions with coaches in the NBA at the end of quarters or at the half. When do you begin to formulate your questions?

I take notes throughout the game of moments or stats or topics that I think are important. But I always wait until the buzzer before deciding what to ask because the game changes so quickly. You can’t just be complacent with your initial thoughts.

Who did you idolize as a sideline reporter growing up?

Hannah Storm I remember really loving, because she could do it all – reporting, hosting, live or taped reports. But then I got to work with Andrea Kremer and Lesley Visser and was blown away by their tenacity and all they accomplished. Tracy Wolfson is such a pro. Doris Burke is my hero.

Thanks for pointing this out. Just went a little too fast. Lesley is one of the brightest, quickest and most talented writers I know (in addition to being an excellent broadcaster).