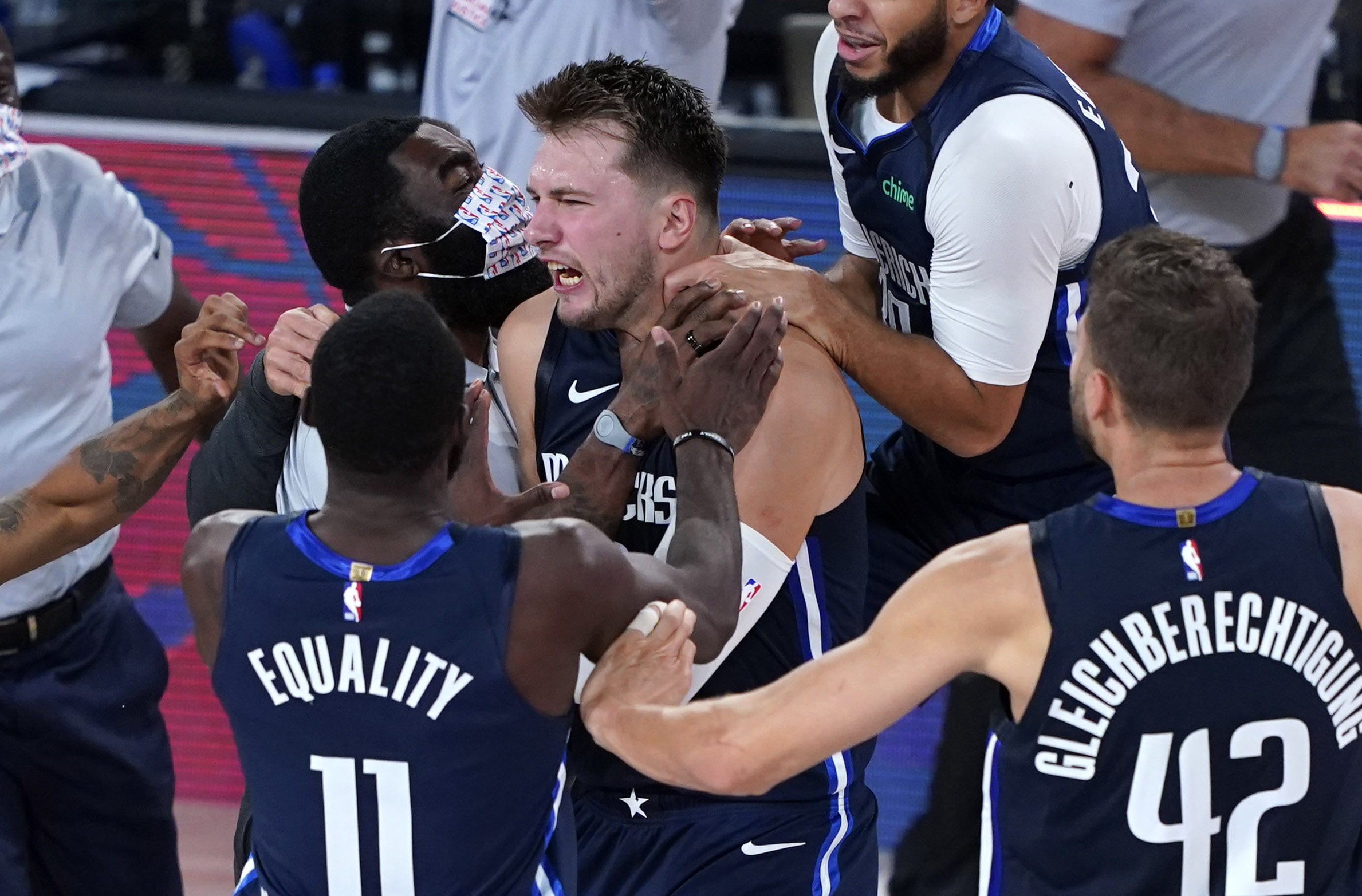 First there was the Mavericks’ Luka Doncic. The 6’7″ star from Slovenia became the youngest player in NBA history to record a triple-double in the playoffs that included more than 40 points. He pumped in 43, in addition to 17 rebounds and 13 assists. He capped his spectacular night with an eye-popping, game winning, three-point buzzer beater in overtime, to beat the Clippers. Social media marveled over the 21 year old’s stimulating performance and raw ability.

Then there was the bittersweet moment, Kobe Bryant’s would-be 42nd birthday, his first since he died tragically in January.

While the issue of social injustice is still very much on the radar, Jacob Blake, a 29 year old black man was shot seven times by Kenosha, Wisconsin police. On Wednesday night, in the aftermath of the tragedy and in response to the shooting, the Milwaukee Bucks boycott their game against the Magic. The rest of the league followed. Major League Baseball and the National Hockey League also cancelled games.

Through this emotionally fueled week, what might have gone unnoticed was the firing of Indiana Pacers coach Nate McMillan and other developments.

As you could imagine, the busy week kept the talkies busy. Here’s what quite a few had to say:

Smith opened up this week on social media, leading with excited remarks about Doncic’s record-breaking game. He seemed shocked and mind-blown with Doncic’s ability to perform, even on an injured ankle. Smith later said “I have nothing else to say other than: this brother is the TRUTH.” Later on, he discussed the shooting in Wisconsin with the caption “Here is what I want White America to understand.” A video of his remarks on the ESPN show “First Take” was included too. Stephen A. compares the stories of unarmed black men getting shot by police to a white man who shot nine black worshipers at church and was taken to get food after being arrested. He later refers to Lebron James’ comment on “being scared to wake up every day” and how black athletes and people every day are scared in America. Smith ends the week with an exciting video announcing how ESPN and ABC want him to join NBA Countdown through the playoffs and finals. An inspired Smith closes the video with clenched fists and a big smile.

McGrath’s feed this week included a lot about college football’s preseason AP poll and the looming start of the season (for the ACC, SEC, and BIG 12 at least). As a reaction to the Top 25, she shares how hard it must be for Ohio State Buckeyes fans to see their team in the #3 spot without a Fall season to follow. McGraths responded to @ESPNCFB preview video with a cute GIF of an excited toddler smiling because of a cotton candy sugar high. You could sense her enthusiasm for the return of college football and the sport through the screen. As the week continued, she proceeded to talk about the Bucks’ decision to boycott Game #5 of the NBA playoffs against the Orlando Magic. As a response to ESPN’s Adrian Wojnarowski’s breaking news of the boycott, she tweeted “This is historic. It will be interesting to see how and if other professional athletes follow.”

Wilbon’s presence online this week was focused on the late, great, Kobe Bryant and a video message that he produced in celebration of Bryant’s would-be 42nd birthday. The video on Twitter was captioned “What is the greatest gift I could give Kobe Bryant on his birthday? More Time.” The admiration that Wilbon shared for Bryant emanated through the video he narrated, extolling and celebrating Kobe’s great legacy. As soon as NBA players started boycotting games because of the Blake shooting, Wilbon shared his point of view by saying “If you think that protesting and kneeling and even boycotting is automatically going to put your frustrations away, I’m sorry. I’m here to tell you as an old man, that’s not necessarily the case. In fact, it’s damn unlikely.” He later tweeted a video of his comments on “Pardon The Interruption”, talking about how NBA players hope their boycotting will get the police shooting to stop in the short-term.

Patrick had lots of guests on his Dan Patrick Show this past week, including the legendary NFL play-by-play voice, Al Michaels. They discussed the possibility of calling a game remotely and neither of them were quite fond of the idea. Patrick later talked in detail about how he thought the last 365 days were the craziest in NFL/sports history. Chris Webber was another guest on the show and said he thinks that the Clippers are in trouble. A pie in the face was punishment for Patrick after he made a bet that Luka Doncic wouldn’t score more than 29 points in the Mavericks’ Tuesday night game against the Clippers. He had 43. Philip Rivers and Charles Barkley capped the week for Patrick and they joked about foot races with Tom Brady and how if Giannis doesn’t win the championship this year, it doesn’t automatically mean he is leaving Milwaukee.

Cowherd had a lot to talk about on his show this week and spent a lot of time watching NBA playoffs based on his Twitter feed. Cowherd began by mentioning how well he thought Dwight Howard was fitting in with the Lakers and how Kyle Kuzma is more of a “bystander” in the offense. The NFL was another topic of conversation for Cowherd when he tweeted the photo of Sport’s Illustrated’s cover with Russell Wilson pictured as “The Total Athlete”. “Glad everyone figured it out” was captioned above, clearly showing his support for Wilson’s talents at quarterback. More quarterback talk arose, the topic of Aaron Rodgers and how much longer he’d be in Green Bay. Later, Colin addressed the Cowboys and whether they should sign Earl Thomas. Cowherd laughed saying “It’s just fun and cotton candy. I can’t take the Cowboys seriously.” NBA talk came back with more playoffs in the bubble and ultimately the boycotting of games. Cowherd tweeted about his respect for Adam Silver and the NBA for the platform it gave the players to speak about their social concerns throughout the playoffs. He ultimately does not believe the season should be cancelled. Yesterday, the players agreed to resume the season this weekend.

With a ton of NFL news about testing, trades, and injuries, Rapoport’s Twitter and news feed were filled. Lots of talk about Jarrett Stidham competing for the Patriots’ starting job because of Cam Newton’s hip injury.  Teams, such as the Arizona Cardinals, Cleveland Browns, and Washington, were reported working out various position players over the course of the week as possible additions to their rosters. Various reports on COVID testing results throughout the NFL, sent teams into a frenzy. Rapoport reported that the Bears were one team that dealt with false-positive testing results which ultimately lead to them preemptively postponing Monday’s practice.

Rapoport is cautious about what this means for the season as a whole if and when incidents like this occur again what protocols will be in place to address them. Another big topic of conversation this week was the news about Earl Thomas’ practice altercation which led to his release from the Baltimore Ravens. Rapoport reported that the Cowboys are a potential landing spot for the star safety, but based on a conversation with Dallas’ coach Mike McCarthy, it does not seem like a confident bet.

Another topic was Budda Baker’s record-breaking 4-year $59M contract extension with Arizona. It makes him the highest paid safety in NFL history. He tweeted too that Bruce Ariens, a previous head coach of the Cardinals, told him “That’s a special player. Believe me.” Rapoport rounded out the week responding to the news of the NBA boycotting games. He simply said, “Such a strong message.”

Whitlock, a contributor for Outkick.com, had some insightful and powerful words on Wednesday night following the sports industry’s responses to the Jacob Blake shooting. Whitlock claims in his recent column that Lebron James is “an agent of chaos, working closely with politicians who use racial division to rally voter support.” The job of getting people, mainly black Americans, to vote has been indirectly placed on the backs of athletes like James and Colin Kaepernick. Whitlock wrote that “it’s their job to inflame the emotions of black people and get us to vote for Joe Biden like our lives depended on it.” Later on in the column, Whitlock called James and other athletes “useful idiots” because he believes they are pointing black communities to the wrong target. He thinks “it’s a joke” that the Democratic party is going to “save black people from the ‘systemic racism’ found within the criminal justice system.” Whitlock ends his column by calling out sports teams, players, coaches, sports media, and institutions for being incentivized “to keep the focus on the lowest hanging fruit — working class cops,” instead of the people responsible for creating the system.