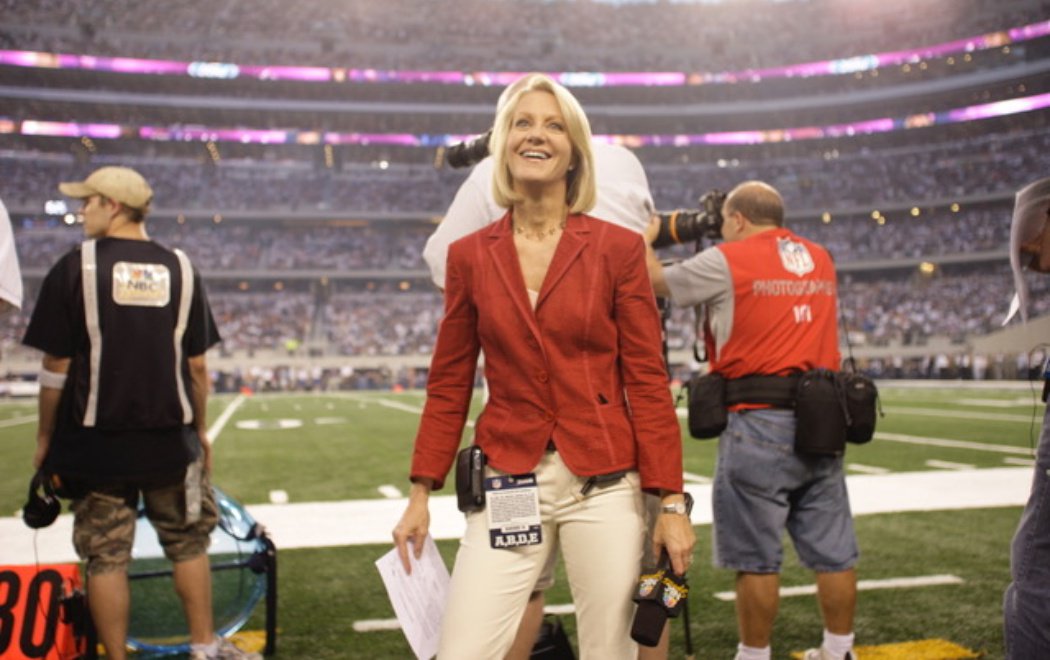 In a continuing year of recognition of woman sportscasters, the Pro Football Hall of Fame presented Andrea Kremer with its Pete Rozelle Media Award this past weekend. Earlier in the year, the Naismith Hall of Fame named Doris Burke the winner of the 2018 Curt Gowdy Media Award. Kremer is the second woman to be bestowed the Rozelle honor. The gifted Lesley Visser was duly recognized in 2006.

Kremer started as a writer and producer at NFL Films. There, the late Steve Sabol appreciated Andrea’s talent and suggested to her that she apply her good journalism in front of the camera. Kremer did and her career blossomed. She had a long run with ESPN and later was part of NBC’s prime time football coverage.

A Philadelphia native, Kremer worked 25 Super Bowls and attended one, just four days after giving birth to her son. She now works for the NFL Network.

There was no encouragement needed from dad, a prominent judge. Andrea fell in love with football on her own as a young teenager. Her mom noticed that on Mondays in the Fall, she came home from school with extra cash. When asked, she told her mother that she cleaned up in the week’s football pool.

There were women who got television face time years ago, namely Phyllis George and Gayle Gardner. Yet Visser and Kremer brought a journalistic firmness to the set and on the field.

It’s too bad that the Rozelle Award shortchanges local broadcasters. Only one play-by-player has won it through the years; in 2004, Van Miller, the longtime Voice of the Buffalo Bills . The other winners are known for their contributions nationally. Beyond just network faces, current and past, from Jim Nantz and Al Michaels to Curt Gowdy and Frank Gifford, executives too have been part of the mix. Bill McPhail was the first winner in 1989. He had been president of CBS Sports, the network affiliated longest with the NFL . Others are Val Pinchbeck, the NFL’s Director of Broadcasting during  years the league enjoyed great television growth and Ed Sabol the founder of NFL Films.

It might be worth doubling both the Naismith’s Gowdy and Rozelle Awards each year. In other words, how about one for national accomplishments and another for team announcers?

Basketball’s Naismith has a difficult challenge. It serves as an enshrinement for both the pro and college game. There are many deserving candidates, network broadcasters and both pro and college play-by-players. It’s tough to play Solomon with  just one award each year.

On the pro football front, think of all the great local voices missing from the Pro Football Hall. I can name at least ten off the top of my head; Marty Glickman, Merrill Reese, Brad Sham, Bob Kelly, Gil Santos, Gib Shanley, Bill King, Joe Tucker, Jack Brickhouse and Bob Martin. There are more.

Anyhow, we are fortunate to have historian Curt Smith weigh in on the Rozelle Award. I also asked him about college students today. Smith teaches English at the State University, Geneseo.

The Pro Football Hall of Fame’s Pete Rozelle Award is its version of baseball’s Ford Frick Award. But it’s where the parallels end. Only one local NFL play-by-play announcer, Van Miller of the Bills, has been recognized. Other than Miller, all the awardees are national figures, both broadcasters and executives. Should it change its framework? There have been many wonderful local broadcasters.

You’re correct. From Marty Glickman via Jack Brickhouse to Merrill Reese, a slew of skilled local play-by-play and color Voices have made pro football come alive. Raised in Upstate New York, I can attest to Van Miller’s radio prepotency. Having said that, as Vin Scully said, professional football was once “nothing but a bunch of pot-bellied longshoremen” on teams from places like Rock Island, Canton and Racine. Before network television, the NFL mimicked pro wrestling—except that wrestling had a niche. Perhaps the number of local Rozelle recipients could rise, but the national emphasis is logical.

To me, Rozelle Award recipients rightly reflect the fact that network TV turned a dead-end kid into weekend mania. “If ain’t broke, don’t fix it.” The NFL ain’t broke. What may be is baseball. For at least the last quarter-century, its increasing desertion of network TV—until Memorial Day weekend 2018, baseball did not appear all year!—has had a disastrous effect. According to the Gallup Poll, for the first time baseball is now only America’s third-favorite sport: football 37, basketball 13, baseball a mere 9, and soccer 7. Among 18-34 and 35-54-year-olds, baseball decisively trails the other three.

By contrast, 45 percent in a similar 1964 Harris Poll named baseball their favorite sport, and 23 percent as recently as 1992. An unwitting metaphor for this freefall is the case of legendary announcer Dizzy Dean, whom famed media critic Ron Powers called “a mythologizing presence” on the 1953-65 twice-weekly afternoon Game of the Week. Ol’ Diz’s CBS Game was TV sport’s first network series of any kind, astonishing industry brass by luring up to 75 percent of weekend sets in use.

In 1976, two years after Dean’s death, the prestigious National Association of Sportscasters and Sportswriters inducted him. Yet half-a-century after Diz’s network exit, the equally esteemed Baseball Hall of Fame’s Ford C. Frick Award inexplicably still excludes this monumental Voice. This weekend NBC’s Bob Costas received the Frick Award: a superb choice. Dean should be next. In some way, baseball desperately needs to utilize the potential of the only medium to reach every American living room—network TV. There’s no better way to begin than to finally honor the man who first showed it.

You’re a professor in Upstate New York. In general, what do you like about college students in this digital world and what frustrates you.

More than ever, a fractured time needs to teach a factually honest, not politically correct, history of America and the globe. Many college students often don’t receive a facsimile of that in today’s digital world. Most can access, compile, and tabulate vast computer-based information, but can they reason?

Today’s generation is taught to feel, but can it think? Political science majors prize the concept of the identity group—but do they prize the unity America felt after the attack on Pearl Harbor? Do they learn how we prayed as Americans on learning of the D-Day invasion—June 6, 1944? If not, why not? English majors inhale the latest literary racial and gender trend—but do they grasp the brilliance of Fitzgerald’s The Great Gatsby? Do they read Faulkner, exploring his texture? I have heard of some who don’t know who he is.

Many college students work hard, believe in right and wrong, and yearn “to solve spiritual hunger,” as one American president movingly described, “which all of us have and which, of course, has been the great mystery of life from the beginning of time.” Too many, though, are a metaphor for our culture. They are glib, adroit, and digitally skilled, which is fine. It is not fine that too many teachers and students think those traits can replace character. Superficial qualities may build a career. They can’t build a life worth living.