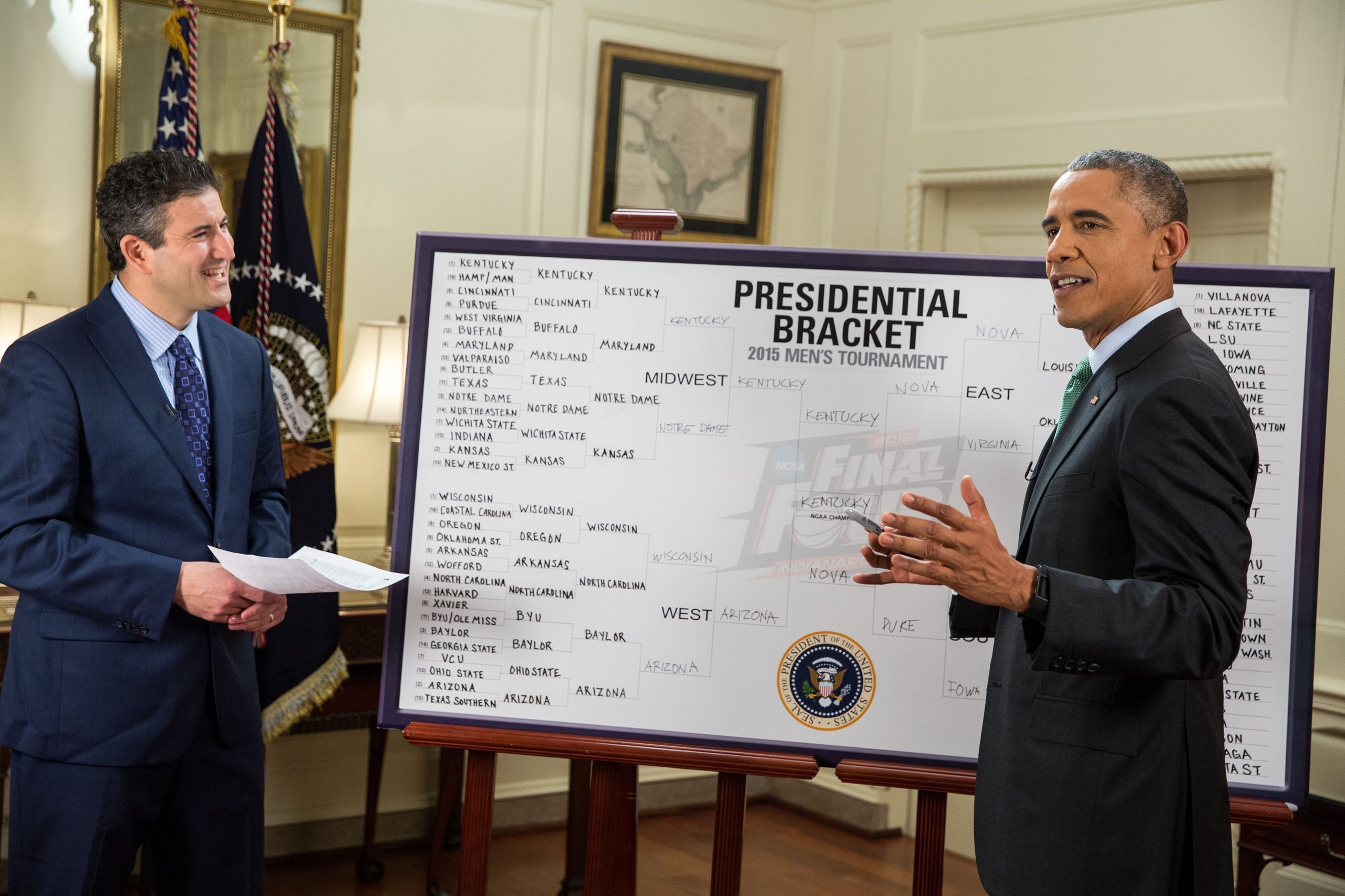 Former ESPN basketball analyst Andy Katz hosting President Barack Obama's March Madness bracket selections on ESPN. In the spring of 2017, Katz was among 100 employees laid off by the network. He now writes and broadcasts for Fox, ncaa.com and other entities.

The kid from the Boston area was living a dream. And for a hoops junkie turned reporter, it couldn’t get any better!

In March, ESPN’s Andy Katz would stand alongside Barack Obama, a president who happened to have a flair for the game. With millions watching, Katz observed respectfully as the Commander in Chief confidently filled out his March Madness bracket. Katz would occasionally chime in gently .

As the NCAA Tournament approached in 2016, Obama filled out his last bracket in the White House and for the final time Katz had the honor of hosting the ESPN program. Life couldn’t be better and accomplishments couldn’t be better defined.

But about a year later, Katz had the carpet pulled out from under him.  In the spring of 2017, there were two dirty words circulating in the cable industry, cord cutting. Subscriptions were falling and so was revenue. It cost hundreds of ESPNers their jobs, including Katz.

Andy Katz has attacked life with a glass half-full mentality.

In the middle of his senior year at Newton High School outside Boston, Katz was surprisingly cut from his varsity basketball team. Instead of wallowing in defeat, Katz started announcing his school’s basketball games for the local cable company. Weeks after being cut, Katz was covering games and stockpiling valuable broadcasting experience.

In 1986, Katz enrolled at the University of Wisconsin-Madison. From the get-go at Wisconsin, Andy continued his passion for journalism. As a sophomore, he became the youngest sports editor in the history of the Daily Cardinal, one of Wisconsin’s student publications.

After stints with regional papers across the country, Katz joined ESPN in 2000 as a college basketball analyst. Along with covering hoops for the sports network, Katz at times filled in for ESPN original Bob Ley on Outside the Lines.

In our interview, we learned a little more about Andy, 52, experience in the field, what he has done since his ESPN days and what might be ahead.

What pushed you toward a career in sports media? Was there a specific moment that sparked your interest in journalism?

My story starts by getting cut as a senior in the middle of the season at Newton South High School. But instead of shrinking and wallowing in my own defeat, I went to the local cable company and asked if they would televise the Newton North and Newton South boys basketball games. The year was 1985-86 and Newton cable was a shoestring operation. They weren’t doing local programming outside of local government meetings and parades. They agreed to let me do it and I recruited friends to be cameramen. I did the announcing with a partner. So, within a few weeks, I was announcing the games of my former teammates. I continued this passion on day one when I got to the University of Wisconsin, working for the Daily Cardinal and then sports editor Rob Hernandez. I ended up being the youngest sports editor — as a sophomore — at the Cardinal. My passion for journalism and notably sports journalism has been ongoing for nearly 35 years.

You grew up in the Boston area, which is a cradle of journalism. The Boston Globe has put out a star-studded sports section for years. Who were your early favorites?

I grew up reading the Globe during the golden age of the paper. I loved the Sunday notes columns of Peter Gammons and Bob Ryan. But Ryan was my favorite. My one goal was to write for the Boston Globe, the paper that was delivered to my doorstep. That was it. That’s where I always wanted to work.

What was the transition like going from your early years in print to broadcast at ESPN? Who were your role models or mentors then?

When I arrived at ESPN, the only other sports reporters I remember in 2000 were Peter Gammons (baseball), John Clayton (NFL) and David Aldridge (NBA). But the trend then was to just throw you onto ESPNNews or SportsCenter and see what happens. So if I had failed miserably I don’t think I would have lasted as long as I did. The people I think about most fondly are all the producers I worked with during nearly two decades. I remain friends with many of them and their sage advice stays with me.

You have experience in both broadcasting and writing. How is facing deadlines for a print piece different from television?

They are related. I wouldn’t change any of it. I do believe that all reporters — regardless of topic — need to be on a beat. Working a story on a daily basis and cultivating sources is critical to the growth and development of a journalism career. Writing on deadline and cranking out a news piece for SportsCenter or for Outside the Lines are similar. The major difference is TV writing has to be very direct, short and not too deep into the minutia of a story. Writing gives you more freedom to expand your thoughts and add even more context to a story.

Who have been the most stubborn or challenging college coaches you’ve interviewed?

With the COVID-19 pandemic still top of mind, how sure are you that the college basketball season will be played in a timely fashion or at all?

Very. There is too much at stake financially — not just athletics but overall on college campuses. But I do think we are in for some challenging months and the need to be flexible will be critical. Tournaments off the mainland need to have a second option in case travel becomes an issue. Neutral site events might relocate if they can’t have fans. Some teams that play in pro arenas may look to play on campus to save money. And if a player or players test positive there could be some games that don’t get played or end up being rescheduled. But I’m optimistic we are going to have an NCAA tournament in 2021 that will be as close to normal as it could be post a pandemic.

Describe the preparation process for interviewing President Obama. What was security like at the White House? Were Secret Service officials with you in the room? Did the president need any coaching on names or the like? What was your overall impression of him?

Well, we could do a whole separate long form magazine piece on this subject. I have documented it publicly before about how and when I asked him in October of 2008 to fill out the bracket if he won the election. I have a number of stories from all eight years, including playing pickup ball with him and his friends on election day in 2008 and 2012. Security at the time was much like an airport. The main difference was just an advance screening by giving the White House our social security numbers to run a check. Yes, secret service is always with the President. He never needed coaching during our bracket taping or the other times I was with him on the USS Carl Vinson in 2011, at White House championship events or our walk and talk on the 40th anniversary of Title IX. President Obama is genuinely a good human being. He has an incredible gift too that disarms those around him. He always made everyone on our crew feel at ease.

In 2017, you were laid off at ESPN. What were your emotions like after getting the news? Do you harbor any resentment?

I was blindsided and never thought for a second it would be me. I was a one-time Volunteer of the Year at ESPN, raising tens of thousands of dollars for the V Foundation, the eight years of President Obama and 18 years of being at the beginning of our coverage of college basketball for ESPN SportsZone and then ESPN.com and onto all ESPN platforms (as well as subbing for Bob Ley for three years when he was off on Outside the Lines).

So, there was shock, pain, hurt, but not anger. It was like a divorce when you had no idea your spouse was going to leave you. I never was angry. I never saw the point. How you handle a layoff and treat your former employer, peers and teammates will determine what will happen next in your career. The biggest mistake you can make is to go on social media and express rage. That’s never going to help you. Remember, you need to get another job and that employer may look at how you handled your exit. And you may need the people who laid you off to help you get another job.

You now work as a freelance journalist for a variety of different platforms including the NCAA, The Big Ten Network and Fox Sports. Where do you see yourself going from here? 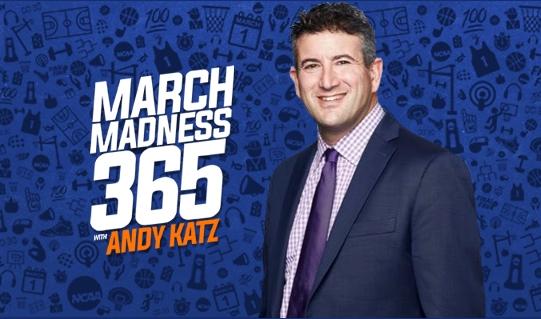 Actually let me redefine your question and give you what I’m doing. I’m on contract with the NCAA/Turner Sports and for all on air I’m with Fox Sports and the Big Ten Network. I also do some side digital work with the Pac-12 and West Coast Conference among others. But my main work is for NCAA/Turner and Fox/BTN. And I love it. Our teams at Turner Sports (for all our March Madness content, including our March Madness 365 podcast), the NCAA, Big Ten Network and Fox Sports are all elite. I love their innovation. You have to continue to challenge yourself and be versatile. I have never scoffed at being much more versatile and doing things on my own from my phone to a digital camera. Those that didn’t adapt got left behind.

I wouldn’t change anything from my 30 years as a professional journalist. But I love working with the entities I’m with now and the people I’m engaged with throughout the course of the year. I never missed anything after the layoff and thoroughly enjoy my work life. Where does it go from here? Well, I would just like to continue this path I’m on and continue to challenge myself. The one thing that I hope to recapture is the podcast I did with ABC News’ political director Rick Klein. It was called Capital Games. The podcast was on sports and politics — my two passions. We had a good thing going with guests from sports and politics at all levels (senators, governors, presidential candidates, etc). My hope is that we could get back on Sirius XM. We were there for one episode a few years ago. I firmly believe it’s a program that would have an audience on the POTUS Channel.

Not sure I can come up with one. I would rather say what’s the most memorable. And to me our OTL story we did on Seb Bellin, the former Oakland men’s basketball player, who was a victim in the Belgium Brussels airport bombing in 2016 resonates with me to this day. Seb became a good friend and an inspiration still to this day. I’ve been fortunate to do so many stories and interviews that I will remember for quite some time.