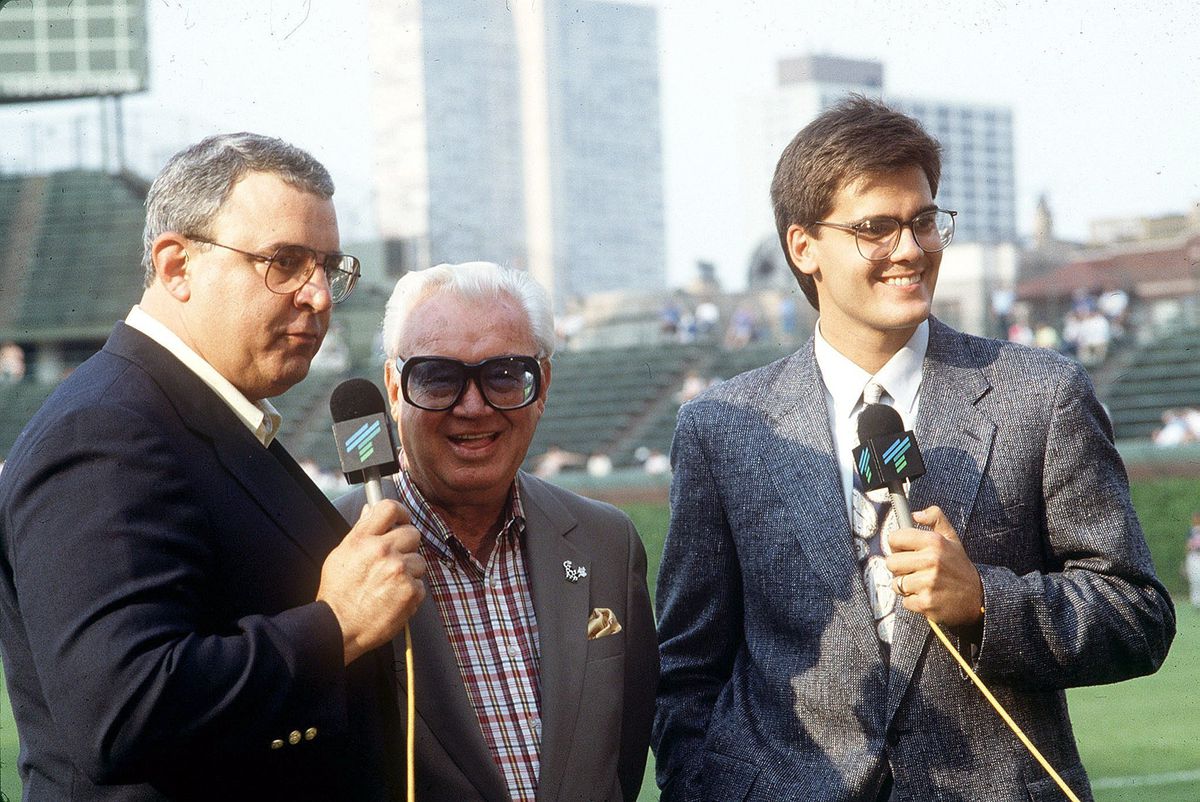 Skip, Harry and Chip Caray (l-r), one of several royal families in broadcast sports. The Carays are the first to extend their family name to four generations. Chris and Stefan Caray are hoping to work their way up the ladder. 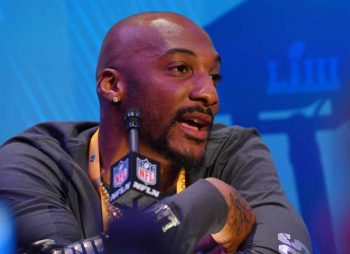 Aqib Talib, the former cornerback who spent 12 years in the NFL, started his pro career in 2008. He had played his college ball at Kansas. His twelve years as a pro were split between Tampa Bay and then Denver. In the years leading to his retirement from the field, broadcasting was dominating his restless eyes. When he hung up the cleats, he was hired by Fox where he was unpredictable. This year, when Amazon Prime prepared to launch an exclusive Thursday night series, he agreed to partake regularly in a pre/post role. But for Aqib now, it’s turned into a nightmare.

His brother Yaqub Talib’s was arrested last week for killing Michael Hickmon, a youth football coach, in the Dallas area. Making it worse, witnesses said Aqib himself had started the brawl, running across the field and engaging in fisticuffs that accelerated, turned tumultuous and deadly.

The violent event sullied the launch of Amazon’s redesigned Series. Aqib had a run-in with the police before, so Amazon eagerly wanted to disassociate itself from Aqib. We’ll learn more about what led up to this in the weeks ahead. Intermingling Aqib with the bells and whistles would dampen the newish Thursday series.

For the sake of his family, Aqib, through an attorney told the media that he’s leaving the Amazon Prime’s series.

Not an ideal start

It might take time, yet Al Michaels has the wares and stature to build streaming and give it credibility. It will be hard to win the war against the line-networks with no more than sticks and stones but Al should attract  Thursday night viewers on Amazon Prime.  Michaels will also do a few regular season games on NBC, in addition to one post season matchup. Don’t expect huge ratings immediately but for Al, it’s a smart move. His luster hasn’t dulled yet at all. He’s still sharp and considered by many as an NFL icon. Now Al’s mission is to spawn and seed what NFL fans would like, and to keep Herbie in check.

Hannah Storm and Andrea Kremer, were both credible and talented but they tiptoed out of the Thursday night scene, like never anything happened.

During the 1950s, there was no bigger sportscaster in America than Mel. He was the Voice of the Yankees, a club that seemed to win more World Series than Roosevelt won presidential elections. Allen also had a commanding and inviting voice and an avuncular tone. He carried a warm and genuine smile. When Mel was behind the mic. it was a big event. Be it on radio or TV, from 1947 through 1963, Mel missed only one Classic, 1954, when the Giants swept Cleveland. He did virtually every Rose Bowl, the granddaddy of ’em all. Through the years, he worked network games with Russ Hodges, Red Barber, Vin Scully, Bob Prince, Curt Gowdy, Chick Hearn and Jack Brickhouse among others. His sharpness began to fade in the early 60s and he shockingly lost both gigs, NBC’s World Series and the Yankeecasts at the end of the ’64 season.

Not the gentlest or friendliest, yet the pioneer and the first baseballer in New York. He helped make the Dodgers famous in Brooklyn and beyond. Bur Red was difficult on his disciples. Ernie Harwell and yes, Scully in that group too. Pedantic, cold and miserable. In his early days, Red brought baseball a rhythm on radio. Out of the booth, if he said he’d give you 30 minutes in his home to talk about your career, he meant it, 30 not 31! Ernie and he couldn’t stand one another when they worked together in Brooklyn in the late 1940s. But Harwell counseled Scully: “He’ll make you better.” Red was a taskmaster. He knew he found a gem in Vin  after Ernie quit on him. For Ernie, Red was just too much Red. Barber lip-lashed Vin to death 1n 1950, Scully’s rookie year. Vin emptied his heart to Harwell on how intolerant Red could be. Red was a pain to most. At Yankee Stadium, a bad Yankee ballclub in the mid 60s, the team shoved four in the radio and TV booths. Red’s undoing occurred after the 1966 season. By that time, management had heard enough complaining from Garagiola, Rizzuto and Coleman. Red was gone.

Jack Brickhouse was Mr. Sports in Chicago, so linked with the Bears, the Cubs and in the early seasons of the NBA’s Bulls. He was on both WGN Radio and TV, the leading independent in the market. Jack was brought into the Windy City by Bob Elson who did White Sox broadcasts. Like Elson, Jack rooted. After the war in 1946, already established in Chicago, he went to New York where he did the baseball Giants for one season. WMCA had all 154 broadcasts, home games from the Polo Grounds and recreations from the road. At one of the busiest cross-sections in downtown Chicago, there’s a statue in front of the WGN studios honoring Brickhouse. Jack headed toward retirement and Harry Caray roughly the same age as Jack, taking over at Wrigley, got along splendidly for the short time they overlapped.

A fighter for what he believes, Jack, Joe’s father, won a purple heart during the Battle of the Bulge. After the war, he attended Ohio State, majoring in Radio speech and minoring in Spanish. He got his minor league experience in Columbus and Rochester in Upstate New York. He made the big leagues in St. Louis in 1954. In time, Jack became legendary, working alongside Harry Caray and Joe Garagiola. Not many people did every major sport in the same town. In time, the St. Louis Blues, the old NBA Hawks were on his resume. He’d do some St. Louis Cardinals football and became famous for his association with the baseball Cards. It was his time in grade, share of visibility and gift for telling stories that earned him prominence. Jack was the only play-by-player to do a Super Bowl and a World Series on both radio and TV. He wouldn’t kowtow to Harry Caray. For that matter the two men didn’t get along very well until later. The country got to know Jack and like him. In St. Louis, his death coverage equaled that of Vin Scully’s.

“I said Holy Cow first.” Harry’s evidence: “Scooter was still on the field when he was already in the booth, hollering Holy Cow!”  Halsey Hall, the early-years Twins announcer popularized Holy Cow, perhaps before Harry and certainly before Rizzuto the Yankees’ announcer. Yankee fans might think of Phil as the originator of the phrase. The Scooter put the Yankees’ shortstop-turned-broadcaster into the booth after retiring. Part of Phil’s shtick also happened to be, “Holy Cow!” In Chicago Harry started with the White Sox and moved to Wrigley. He’d call games on hot days bare-chested. it was a Harry tradition which included singing the anthem during the stretch. Meanwhile, in the Caray years, WGN TV had Cubs games often aired around the country too, through the WGN national cable network. Through his stay in St. Louis, Harry did three World Series on TV while he was with the Cards. it included the 1968 Cards-Red Sox on NBC, the last with no playoff series between the the end of the regular season and the Classic.

Cynical and a warped sense of humor, say some of Harry’s son. Skip passed at 68, leaving grandson Chip in Atlanta on Bravescasts. He’s still there. If it wouldn’t have been one  faux-pas too many on the Turner Network, Chip would still have a hook to hang his hat in Atlanta. He’s still a fine broadcaster. Two of Chip’s kids are already broadcasting in the Minors, so than can be an all-time record. Four successive generations of Carays in the broadcast booth. Skip and Chip were faced with a challenge, living in the shadow of Harry who did three World Series in the 60s on NBC. accompanying the Cards to the limelight. Skip Caray built his claim to fame in the nascent years of cable television. Turner’s Braves coverage included many cable markets outside Atlanta, during those frontier years, beginning in the mid to late 1970s. The trio of Skip, Pete Van Wieren and Ernie Johnson Sr.  were watched in all parts of America when Turner was almost treated like a local station with an extensive network. Turner owned the station and the Braves.

One time, Pete Van Wieren was saying where the Braves would be playing next and mentioned they would be in Chicago. Pause. Skip: “Isn’t that where that nut sings during the 7th inning stretch?” He was so funny. And he said that when he filled in when his father had a stroke, he finished the top of the 7th, and Steve Stone turned to him and just chattered at him. He realized later that they were playing clips of Harry singing, and Stone was concerned that it would be too emotional for Skip, and he wanted to divert him. Stone… Read more »

Jack Buck was also a fabulous after dinner speaker and could very much carry a talk show of any type. Would love to have seen him in a late night TV situation.

People tend to forget that Jack Buck did EVERYTHING on KMOX, especially in his first few seasons when he didn’t get to do play-by-play because of Caray and Garagiola, and that he did a lot more sports than baseball and football.