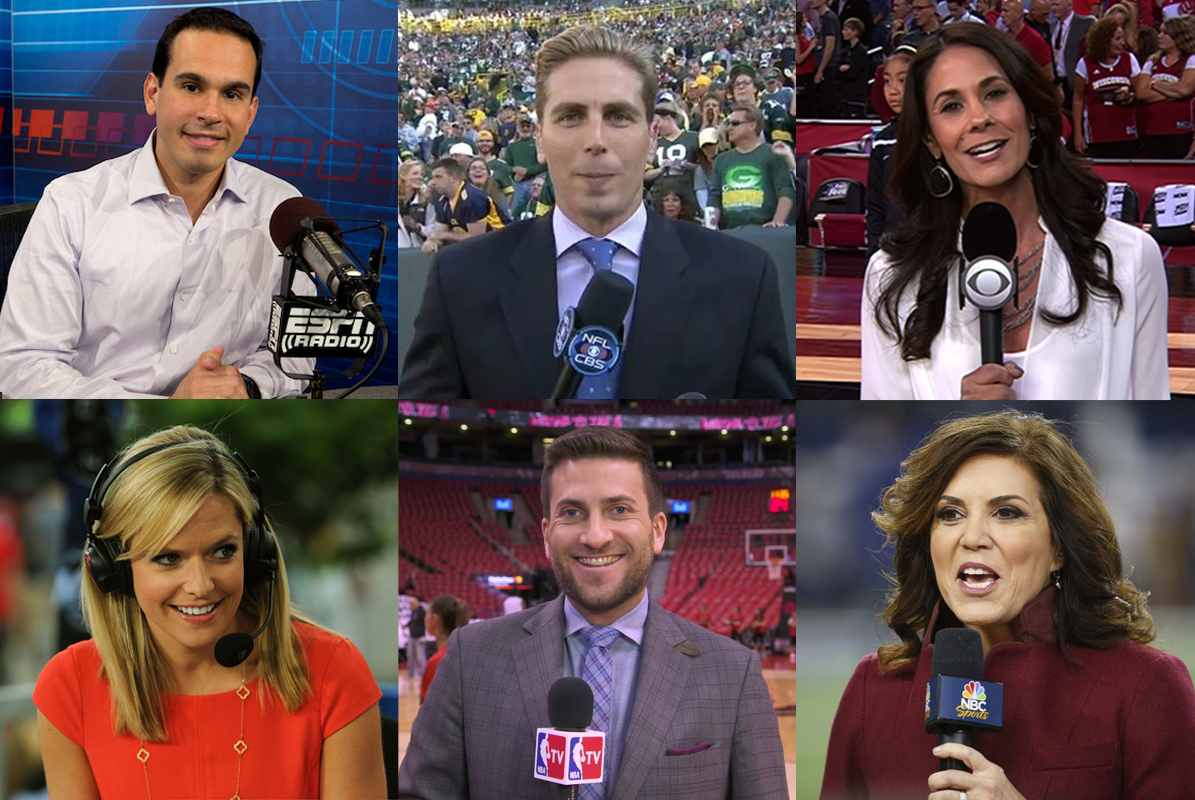 Michael Carter-Williams’ nose was bleeding like a faucet. The Orlando Magic guard had just taken a blow to the face in the fourth quarter of Game #1 of the first-round playoff series against the Toronto Raptors.

His face down in a towel, Carter-Williams rushed to the bench where he was met by the entire medical staff and ESPN’s Jorge Sedano, who had sprinted over to the bench to gather information for a report.

“I’m sitting there leaning in, trying to listen and glean anything I can from the conversation that the trainer and the doctor are having with him,” Sedano said. But moments later, the medical staff rushed Carter-Williams to the locker room. Stride for stride with them—in a suit and dress shoes—was Sedano.

“I’m running at a full sprint with the training staff and asking them questions at the same time, just to be able to deliver the information on what the heck is wrong with Carter-Williams. Those are the things that people don’t see,” Sedano said.

What you do see today are sideline reporters on TV for 20 seconds at a time, maybe 30 if they’re lucky. What you really don’t see is the intense preparation, focused observation, unrelenting examination and constant readiness required to do the job well.

We communicated with some of the top sideline reporters at CBS, NBC, ESPN and Turner and got their feelings on a variety of subjects in the world of sideline reporting today.

Here’s what we found in our final installment of this sideline series:

When do you walk away knowing you’ve done a good job?

Michele Tafoya (NBC): I think the most satisfied I have felt is when the game has come down to the last few plays, and I am able to conduct a meaningful, colorful postgame interview that enhances the broadcast. That’s a good way to end a night. But I am very hard on myself and rarely feel satisfied after a game. When I am able to provide meaningful, impactful information throughout a game, I gain a measure of satisfaction.

Tracy Wolfson (CBS): First off, it has NOTHING to do with how many times you are on TV. Many young reporters think that. It has to do with whether you gathered the correct information, followed up on the initial storylines and answered questions that viewers who are watching have as the game unfolds. And doing it all in a clear, concise manner. Whether it’s an injury, a conversation heard on the sideline, a game plan that was followed or not followed, as long I am able to bring that to the broadcast and communicate it correctly in a timely fashion, I am satisfied. And so many of those times, it may not happen on the air, it may happen behind the scenes, and you pass the info off to the truck or to the announcers so they can utilize it. That is just as satisfying to me. That is when I feel I have done my job.

Kathryn Tappen (NBC): Never! There are always ways to improve in the sideline reporter role because every game is different. You are constantly learning, improvising and challenging yourself. I speak to other sideline reporters about this in the offseason.  You know you’ve done a good job when there was nothing that you were unprepared for. But you rarely, for me never, walk away satisfied with a broadcast. There are always ways to be better.

Evan Washburn (CBS): If I can look back at a game in the hours and days after its conclusion and know that I didn’t miss any injuries or major storylines that unfolded on the field, then I have accomplished goal number one. I was told early on that the last thing you want to do is read something of importance in the local paper the next day that you didn’t cover in the 3-plus hours you were on the air. Another layer to a successful day at the office in my mind is that hopefully you added something to the broadcast that takes the viewer beyond the surface. That could be an observation from the field during the game or through some reporting in the days and hours leading up to kickoff.

Jared Greenberg (Turner): This is a tough one, because I don’t think there is a standard answer.  It truly depends on the game and what is asked of me. If we have a highly competitive game, I probably will do less, but ultimately the goal isn’t about my on-air time, it’s about making sure we cover the game, as best as we can while telling a story that the viewer enjoys.  I am constantly asking myself, ‘what would I want to see/hear if I were at home watching this game?’ I am highly critical of my own work.  But I pride myself on being accurate and topical.  Did I ask thoughtful and relevant questions?  Did I positively contribute to the broadcast and was the viewer entertained and informed?”

What was the greatest challenge or zaniest experience you had being a sideline reporter?

Michele Tafoya (NBC): At halftime of a Sunday night game against Indianapolis, Texans head coach Gary Kubiak collapsed on the field. The story was no longer about sports, it was about a man’s life. It was a singular experience that required us all to be nimble. I will never forget it. It may have been the most challenging assignment of my career.

Tracy Wolfson (CBS): I would have to say they all come from postgame interviews. From the Kick-6, Auburn vs. Alabama, where everyone stormed the field and I had to beg a player to put Chris Davis down from his shoulders so I could interview him, to this past year’s Super Bowl, where it felt like an eternity until Tom Brady would take my interview and the whole world was watching unbeknownst to me.

Kathryn Tappen (NBC): The greatest challenge of a sideline reporter is earning trust. Trust from your producer and director, trust from your broadcasting partners in the booth, and trust of the teams you are covering. It takes years to achieve it.

Evan Washburn (CBS): My first year working the NCAA tournament (2015) was probably the greatest challenge I’ve faced.  I was swimming in information and had no idea what I did and didn’t need to know. I leaned heavily on the experienced guys on the crew, most notably Ian Eagle, who had done a ton of them.

Jared Greenberg (Turner): We were doing a taped interview with Greg Popovich. that was being fed back to our Atlanta studio. I asked Pop several questions, all of which he threw right back in my face. Then he said, ‘I’m just messing with you.’  It was all good-natured fun. We then started the interview over, and he provided thoughtful answers.

I interviewed President Bill Clinton during halftime of a Brooklyn Nets game and it could not have been easier. We identified a security person that was with President Clinton, asked permission and we were granted a few minutes of his time.  It was incredible to learn how knowledgeable President Clinton was about the NBA.

Would it help to rove, to find an aficionado/celebrity you can interview during the game?

Michele Tafoya (NBC): I believe you have to choose these opportunities wisely. It made sense for me to interview George W. Bush before the Veteran’s Day game. When Zeke Elliott was looking to break the rookie rushing record, I talked with Marshall Faulk and Emmitt Smith before the game. But roving can take you away from the most important element: the game.

Tracy Wolfson (CBS): I don’t know if it would help, but if it’s appropriate to the game then it could work. Many times if there is an aficionado or celebrity at the game, I would talk to them before and do it as a report.

Evan Washburn (CBS): Interviewing famous people just because they are at the game can in my mind take away from the action on the field. Preseason and exhibition games are great for these sort of opportunities or when the game is out of reach.