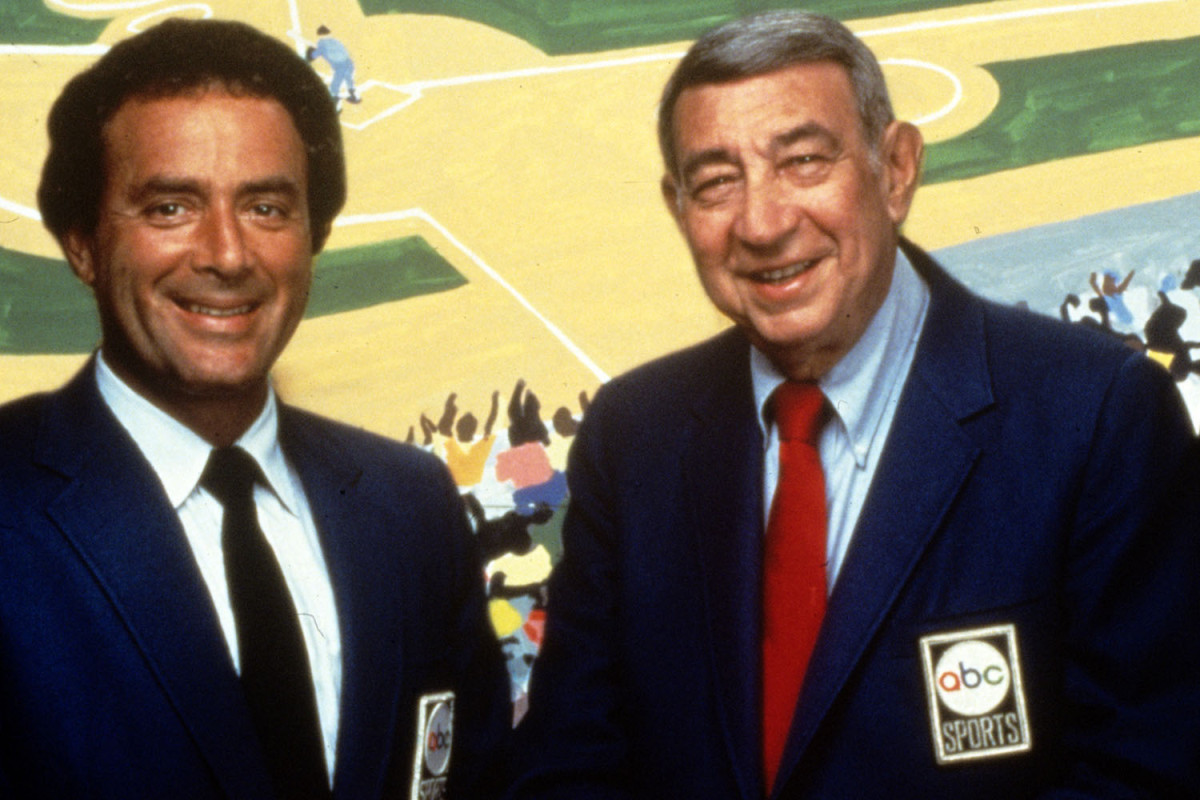 While first identified with pro football, Al also did years of Major League Baseball, including eight World Series on ABC Television. Back then, in the 70s, 80s and 90s, baseball generated healthier and more competitive ratings. Michaels has also done the NBA, golf and the Olympics.

His unrehearsed call of America’s implausible hockey victory over the mighty Soviet Union team in 1980 might just be the best known exuberant exclamation in television sports history. Yes, “Do you believe in miracles?” is arguably the most famous salute ever to a winner.

Michaels can do any sport, albeit he hasn’t done the Cornhole World Championship. But don’t hold it against him.

Al is 75 and still sharp. One reason is he doesn’t overdo it. You won’t see him calling Roller-derby on a Wednesday night on some network streaming device or app. When viewers hear his voice, they know it’s not an ordinary event.

At this point, to the best of my knowledge, Al has an understanding to continue on NBC’s NFL coverage through the 2021-22 season. The Peacock will be doing the Super Bowl that season which for Michaels is conveniently scheduled for Southern California where he’s lived for years.

Al has other interests, he’s been married to Linda for over fifty years, loves the links and is generally curious. I don’t think there’s an issue of separation anxiety.

No network voice to my knowledge has ever done play-by-play of a professional sport on network television once reaching 80. Right now, Marv Albert, best known for his work on the NBA, will be 79 this June and he has another year on his contract which ends just shy of his 80th birthday,

So it raises the question, who’s next? Who will follow Al? Who will become America’s unofficial play-by-play announcer?

Jim Nantz is 60 and in good health. Through a remarriage, he has a young family. He’s hale and aces broadcasts with the same passion and ease that he brought to the booth ten years ago. His love for what he does can’t be disguised. More so than others on network television, Jim draws syrupy profiles of the participants he’s covering, no matter the sport. He also stamps accomplishments with an historical perspective.

Nantz is an excellent storyteller who would have excelled at baseball broadcasting too. Jim and Tony Romo have elevated CBS’ number one NFL team and the trio of Nantz, Bill Raftery and Grant Hill are excellent on basketball. Few will argue that Jim is television’s best golf host ever.

So Jim might very well be the one who Americans will informally embrace as the country’s top play-by-play voice, once Al hangs it up. He brings the values that traditional viewers love, the warmth that fans felt from NBC’s Curt Gowdy, America’s first true network play-by-player. In the 60s and 70s, Curt called the Final Four, the World Series and the Super Bowl.

Think of those through the years who’ve accentuated stories and had an avuncular tone, Dick Enberg, Keith Jackson, Vin Scully, Verne Lundquist and Curt. Nantz can be cataloged similarly.

But this is a new generation. Viewers text while watching. They listen with half an ear. If it’s an athlete’s background that intrigues them, they’ll Google it for information. They don’t listen assiduously to the play-by-play voice.

Many of today’s fans want no more than the bare bones from their play-by-play announcers, skeletal information nothing too meaty. Ask kids today who does the NFL on TV, they’ll say Tony Romo, Cris Collinsworth or Troy Aikman. But they couldn’t identify the play-by-play trio, at least without some prompting.

As such, Joe Buck, 50, ten years younger than Nantz and Fox’ voice of the NFL and MLB, might fit the bill of what today’s generation wants. He’s quick, flawless and efficient. He talks in tweet limited vocal characters. Joe has an uncanny ability to say a lot with few words. His boss at Fox, Brad Zager, calls it verbal efficiency.

But Joe shares few stories, not because he’s incapable of doing so. I’m guessing that he has his finger on the pulse, an appreciation for what viewers want today and delivers those goods and little more. It’s worked well for him. No announcer in history has been a lead voice of the NFL and MLB for as long as he has. Buck has already done six Super Bowls and 22 World Series on network television.

Televised football is not conducive for storytelling. There’s too much activity. Cameras are shifting and announcers have to caption what viewers see. Analysts have to be given room to tell viewers why this and why that. So the play-by-player has to be vigilant about talking in measured phrases. Before all the technology, replays and official reviews, guys like Gowdy and Scully were able to paint human pictures that gripped audiences.

Study the telecast of Super Bowl III and you’ll enjoy the stories that Curt tells about Weeb Ewbank, Don Shula and Joe Namath, among others. Similarly, review some of Scully’s NFL work and you’ll enjoy how he wove in the reason behind Hacksaw Reynolds’ nickname and more.

For Buck today, he’s aware of the social media police. Say something that might be slightly offensive and who knows what might pop up on twitter. It can get nasty.

Off air, Buck is funny and entertaining. But he shares few stories on baseball telecasts, a game filled with heartwarming tales. Wouldn’t baseball be better off if fans learned more about the backgrounds of players, particularly those from impoverished roots. But sadly there’s little of it. Baseball broadcasts are sterile. The play-by-play role is dying a death of a thousand cuts. There’s the set-up man, who might as well be Mr. Rodgers.

Still, for the current generation, Joe Buck has many more good years ahead of him and could be the next Al Michaels, America’s sports announcer.

There are others of a younger ilk who might grow into leading names down the road; they’re universally accepted, they bring a mix of excitement and restraint, they’re knowledgeable in multi-sports, personable and silky smooth. These folks include Fox’ Joe Davis, Kevin Burkhardt and Alex Faust. Others who are well embarked, yet versatile, have hefty chapters left in their careers and can fit the requirements too, guys like CBS/Turner’s Brian Anderson. Brian is solid at baseball, football and basketball. He’s also done golf. He’s not just liked provincially. His easy-going timbre is accepted across the landscape.

There’s also Mike Tirico, 53, who’s comfortable doing just about anything and is rumored to succeed Michaels when he hangs up the cleats. Will Tirico have the platform to excel at a sufficient number of major sports?

Only time will tell.

I follow Firestone’s point, but the fact that Michaels does ONLY football (and an occasional additional event like the Olympics) for NBC leads me to think, well, not quite. Curt Gowdy was that when he was ubiquitous, and I think ubiquity counts for something. It’s harder with the events divided between networks.