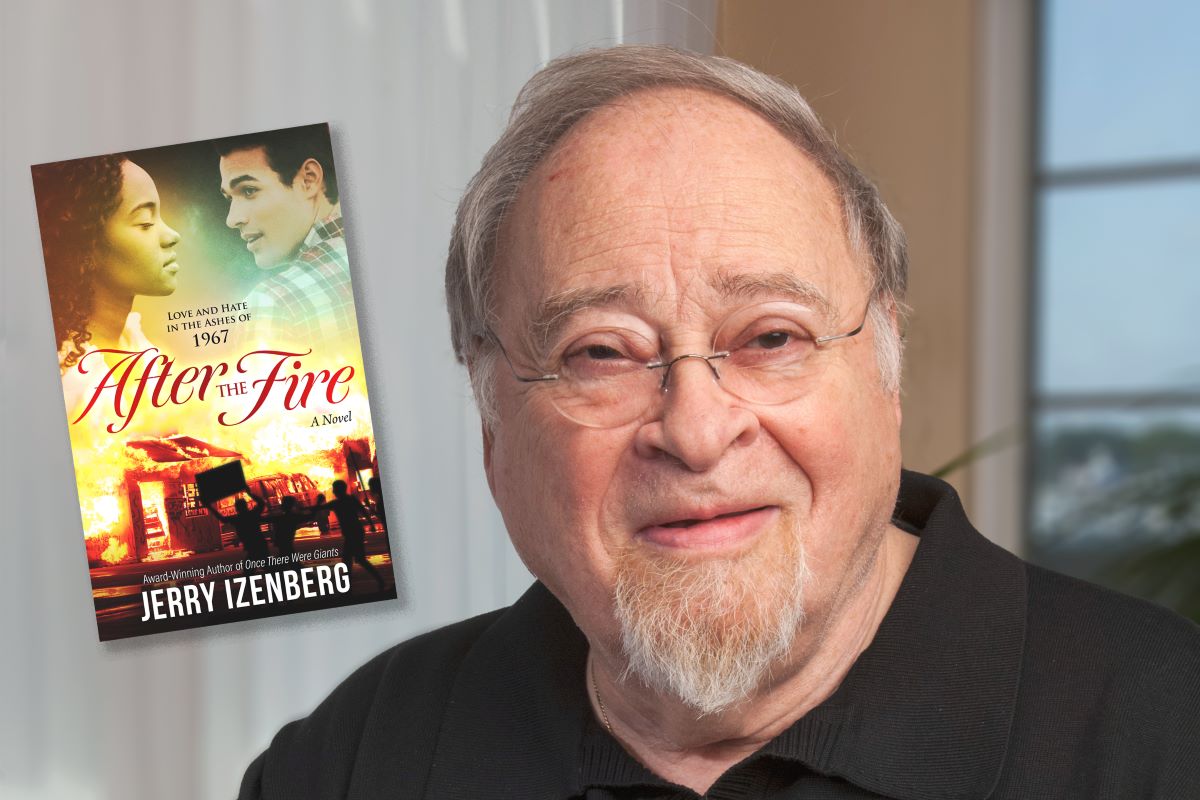 By any measure, Jerry Izenberg is a media icon.

Late yesterday afternoon, I sent his public relations representative, Fred Sternburg, a list of ten questions for Izenberg to answer. Frankly, I didn’t expect to get the answers back for a couple weeks. Would you believe I had the responses in my email by late last night?  It shouldn’t have surprised me. A nonagenarian, the man has hit the keys for seven decades and still whacks away at them, turning words with lightning speed. His answers as you’ll see were spelled out as beautifully as his best column.

Izenberg doesn’t get around physically as well as he did 70 years ago. It was then that he first started writing for the Newark Star-Ledger, his hometown newspaper. Yet his mind is still as sharp as a tack, his opinions are expressed unflinchingly and his recall is instantaneous. Not bad for a fellow who’s equally comfortable talking about the Newark Bears of the 1940s as he is the favorite for this Saturday’s Kentucky Derby.

As a columnist emeritus for the Ledger, Izenberg is still hammering away at it from his home in Las Vegas where his office is lined wall to wall with books. If only the walls could talk! Jerry has witnessed just about every big moment, from boxing and baseball to horse racing and football. His columns have always been engrossing, whether they were on Muhammad Ali or an obscure high school athlete from a New Jersey hamlet.

Credentials? I would say. the man covered the first 53 super Bowls and would have kept going had his legs not gotten the better of him.

At, 90, Izenberg is an inductee of 16 Halls of Fame and a Red Smith Award winner. Prolific? After writing 15 non-fiction books, Jerry penned his first novel, After the Fire: Love and Hate in the Ashes of 1967 (Admission Press) published last October. His best-selling boxing book, Once There Were Giants: The Golden Age of Heavyweight Boxing (Skyhorse Publishing) is being re-released in paperback on May 11th, to coincide with the golden anniversary of Ali vs. Frazier I. Both are available at Amazon.com and BarnesAndNoble.com.

I didn’t have easy access to New Jersey newspapers when I was young and as such, didn’t get to read much of Jerry’s work growing up in Brooklyn. I began appreciating  Izenberg’s depth and storytelling when he played an important role in a popular Sunday night television sports show on Channel 5 in New York. It ran in the 1970s, before ESPN, SportsCenter and longform sports shows filled the airwaves. I always got the sense that half the city’s sports fans watched Sports Extra at 10:30 each week. A writer, Izenberg made a seamless transition to the tube. He took us outside the lines and often inside the heads of athletes. Great stuff.

We covered a lot of ground in our Q&A:

You did TV in New York. “Sports Extra” was appointment viewing on Sunday nights in the 70s. It featured Bill Mazer, Lee Leonard and you. Any quick recollections? 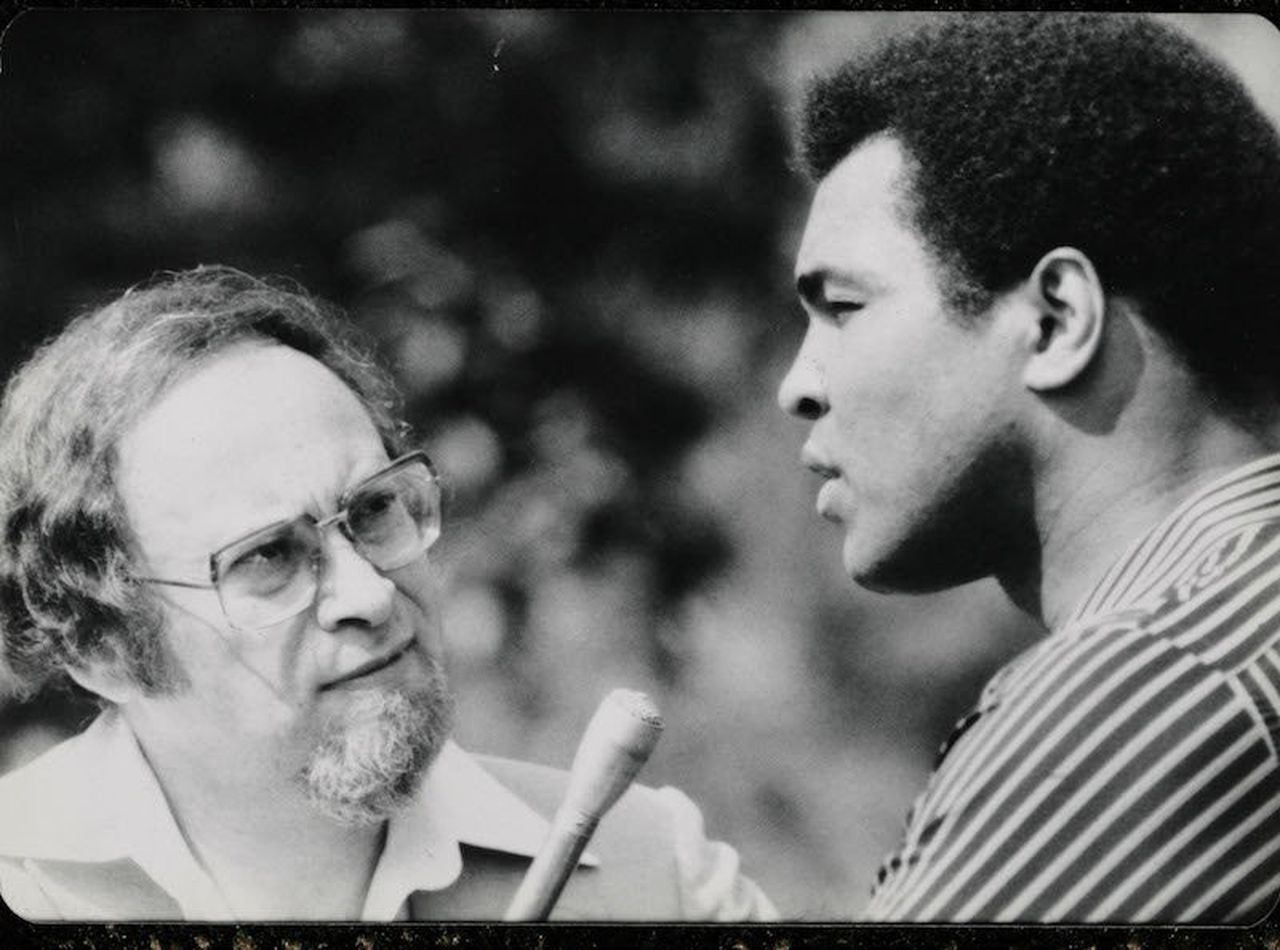 I believe that Sports Extra has never been duplicated.  With the 24-hour news cycle everyone wants to be first more than they want to be accurate.  Television was a baby then and we could do whatever we wanted.  For me it was a part time job, so as a working, traveling columnist, I understood that stories had to be developed.  I pushed to revisit them if necessary, with more depth, and the director let me do so. (Izenberg with Muhammad Ali)

We also had variety.  As a case in point, I would write three to four-minute documentaries for Mazer and Leonard to read interspersed within the show.  They were offbeat but tied in some way to a news item.  For example, the week Fordham returned to football after decades, I wrote a spot with historical B-roll about the day Vince Lombardi, one of the old “seven blocks of granite,” lost his teeth against St. Mary’s in the Polo Grounds.  We circled Vince’s head in a collision with a rival’s elbow.  In the background we played a record of the Fordham glee club singing, “Hail Men of Fordham.”

I would say in the current TV age of yelling, screaming, and debating, to create personalities, our show was deeply involved in entertaining and informing rather than creating ersatz personalities.

Let’s go back. What was the first sports event you covered?

I was a freshman in college, working part time at The Star-Ledger and they sent me to Irvington High School to cover a tournament baseball game against Linden.  If you handed that story to me today I would probably tear it up and say, ‘Fire the idiot who wrote this!’

Who were some of the early sportscasters you listened to as a kid?

My dad had been a professional baseball in the low minors and dreamed of playing second base for the New York Giants, so in our house it was the New York Giants on the old Philco radio.  The one I listened to most was Russ Hodges.  Simplicity and inclusiveness — can you do it better than Hodges did after a long, tense season where the Giants wiped out a 13 ½ game deficit, then won a best of three-game playoff for the pennant on Bobby Thomson’s home run: “The Giants win the pennant!  The Giants win the pennant!”

I liked Ted Husing for college football, Clem McCarthy, Marty Glickman (the best I ever heard in basketball) with his “Good like Nedick’s,” and Don Dunphy for boxing.

I also would say here, as a newspaperman, I had a traveling faculty with me — Jimmy Cannon, Red Smith, Tom O’Reilly, Frank Graham, and Dick Young.  I had the unique opportunity to learn from all of them.

A New Jerseyite, you likely remember Earl Harper, one of the early voices of baseball in New York. He did the Newark Bears and more. Thoughts?

And then there was Earl Harper.  He called the Newark Bears (AAA and Yankee-owned) games.  He would offer a case of Wheaties to every Bears home run hitter.  When he reached home plate, Harper would slide a box of Wheaties down the box seats screen behind home plate and the crowd would chant “Whoops!” and add a loud “Boom!” when the bat boy caught it.  Harper was very good.  He walked with a limp so he wasn’t a former jock but he knew the game.  When I was about 12 and had a part time job, and when I would get off the bus on my way home, Harper was my invisible companion.  It was summer and there was no air conditioning and so every home’s windows were wide open because of the urban heat.  And Earl Harper seemed to be on every radio.  As I walked down the block, I never missed a single pitch.

Who was the easiest sports personality to interview and why?

Ali was the easiest interview because he knew what I wanted and he got rid of a lot of white space where my column appeared because he filled it without prodding.  The most fascinating guy I ever interviewed was Nelson Mandela.  The most surprising was Sonny Liston who thought a lot between answers and it was to my benefit to wait and not interrupt him when he did respond to my questions.  He was great.  He paused because he wanted to be sure how he would say it.  That was living proof that illiteracy and ignorance are not the same thing.  The best one-liners I ever got were from Nick Zito and Wayne Lukas, two horse trainers.  “Why did I become a trainer?”  Zito told me.  “I was too dumb to be a bartender.”  And it was Lukas who told me, “People have opinions but horses have the facts.”

Who was the toughest to interview and why?

The worst I ever had?  I haven’t met him or her yet.  Know your subject.  Be able to take his first answer and let it lead you into the next question.  Bite your tongue, stick to that formula, and there will be no bad interview.

You’re a prolific author. You’ve written many books. I’m intrigued by the one you penned about Pete Rozelle. Where does he rank among all-time commissioners? What made him special?

Pete Rozelle was the best commissioner ever.  He earlier had a career as a P.R. guy so he knew how things would play.  No question was too ridiculous, or more to the point, too controversial for him to answer.  He hired the first Black special assistant, former player Buddy Young, and tasked him with convincing Black players to take off-season jobs that would lead to full time careers after their playing days.  He integrated his game officials roster.  He saw the spread of franchises to other cities not as much for money as for exposure for his product.  He was a true visionary.

You’re a military man, having served in the brutal Korean War. How do you feel about the apathy by athletes who won’t stand during its playing prior to sporting events?

I was not very popular over my stand on Kaepernick, but I totally agreed with him.  My dad was wounded in World War I.  I served in the Korean War.  When I got married his wedding gift to me was an American flag and one hangs next to my front door even today.  If you are supposed to be a reporter, a communicator, then you listen to the “what” and the “why,” and if they’re logical, that helps you understand the “how” of his protest against police brutality.  I don’t think enough columnists took that time and interpreted it in light of their own political preferences instead of looking at it as a protest against what he said, “police brutality.”

Colin Kaepernick could teach Trump (and NFL owners) a lesson in conspiracy – nj.com

You were staunchly in favor of baseball shifting the ASG from Atlanta because of the new voting laws. In retrospect, there are quite a few including Blacks in Georgia who opposed the move. Why the rush to judgment?

I received 176 emails that ran the gamut from scatological to racist to just plain dumb.  I read the bill before I wrote.  They didn’t have a clue as to the nuances and to what it did or did not address.  I realize that the switch was a gut punch to

a sagging economy but it is also an impetus to ending an oppressive piece of legislation and bringing dignity back to the city that will probably get the game back as soon as the legislators join the 21st century.  I point to Rozelle and the Super Bowl in Phoenix and how quickly it was restored after they made Martin Luther King, Jr. Day a state holiday.

What is the MLB Commissioner waiting for? Strip Georgia of the All-Star Game already – nj.com

How would you do today as an active reporter in the digital world?

Complicated question because I AM still a reporter.  But if you mean how would I do by internet standards alone, I would be a failure and congratulate myself for it.

I’ve never met him and he is close to a good friend of mine and lives not far from me, but I’ve read him for a long time, and he is magnificent in so many ways.