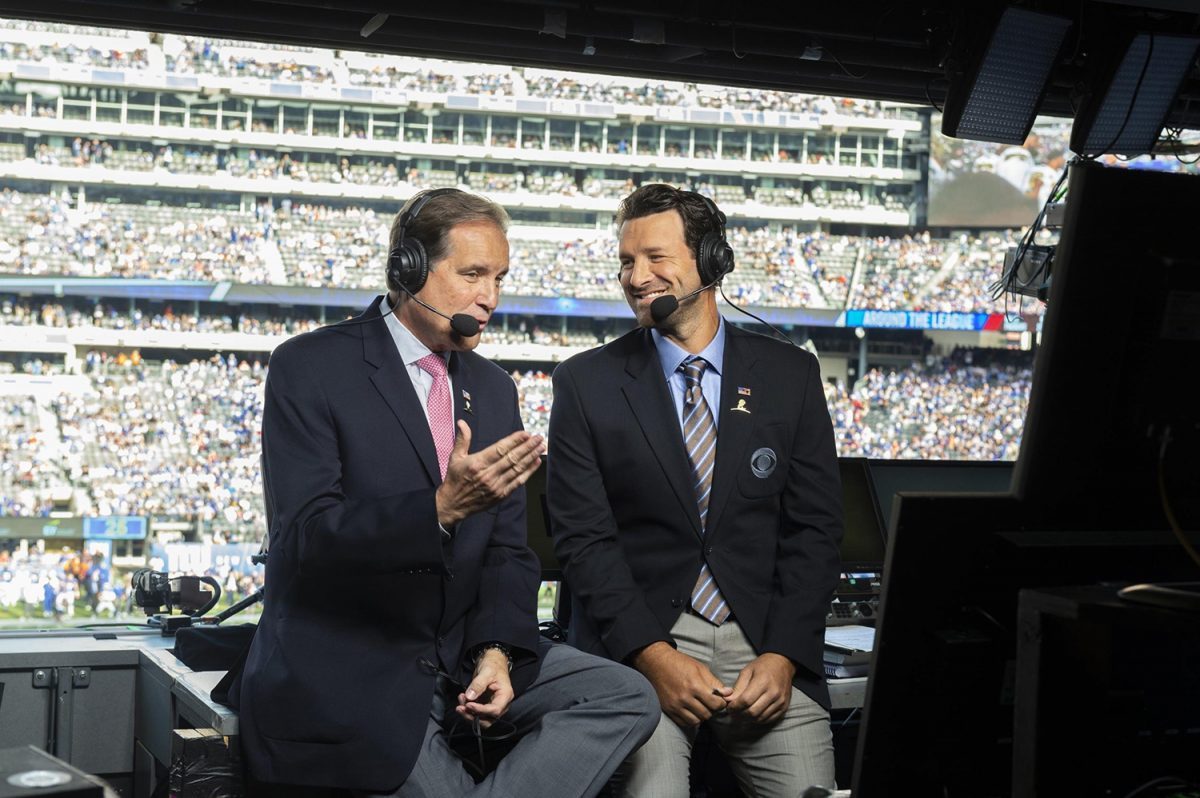 The optics are not good.

The unemployment lines are long, small businesses are forced to close down and vacancies are on the rise.

Sports aren’t doing too well either. Stadiums and arenas are empty. Games are being cancelled. Teams, professional leagues and college programs are losing billions.

Yes, there’s a hurried promise of a vaccine. But lots of granular has to fall into place perfectly for a sense of normalcy to prevail anytime in 2021. At this point and for probably a year or more, the sports world is being supported by television.

For the networks, the advertising dollars seem to be coming in but ratings aren’t cooperating. Baseball, basketball and hockey were hammered and football numbers are hanging in but lagging a bit too. Even the finals of the Masters lost half its audience from a year ago.

But through all this, a story emerged last week in the New York Post written by the reliable Andrew Marchand that Jim Nantz is looking for Tony Romo money. Marchand says that the face of CBS Sports makes roughly $6.5 million a year.

Last summer, CBS agreed to pay partner Romo a reported $17 million per year to do approximately 20 football games a season. That’s almost a mil a show. From what I recall, CBS explained the fat check as one that represents a small portion of their overall rights fee of NFL games. And remember that the NFL produces ratings greater than most primetime shows.

When pioneer John Madden made $7 million a season, it startled many. Jim’s agent Sandy Montag is the same fellow who represented Madden. Seeing millions in double figures thrown out for sports announcers when many in the masses are hurting for their next meal doesn’t look too good.

Nantz is a terrific announcer and an absolute gentleman. He represents CBS flawlessly and defines old-school manners. Jim’s warm on-air delivery is comforting and he has every right to squeeze whatever he can get from CBS. He’s 61 and there are just so many more multi-year contracts ahead of him. Last week, he talked about wanting to do the Masters through at least age 75.

If Nantz were to leave, he would be difficult to replace, particularly on golf.

The idea here is the dollar headline. The virus numbers are spiking as never before, schools are closing and there’s talk of sectors of the economy shutting down.

Like his style or not, Joe Buck is an innovator. He’s made for today’s TV, built around technology and analytics, fueled by guys like John Smoltz and Troy Aikman. Buck is the perfect set up man. He’s Mr. Reset, who seamlessly captions plays with lightning-speed and spews concise teases of what’s immediately to follow. In a world of political correctness, Buck generally stays away from storytelling although he can share anecdotes with the best of them off-air. He’s also Mr. Runway, giving his partners space to elaborate and pontificate. Buck is that terse that Smoltz and Aikman never sound like they’re over-talking.

Tirico hasn’t developed a personal identity yet other than being a man who works his tail off and does everything very well. He’ll never be remembered as an opinion monger or for infusing himself into a show’s content. When you shut the set after a game or studio show over which he presided, you know that he was smooth, graceful and comfortable. He doesn’t have the on-air strong personality of a Bob Costas, Brent Musburger or Bryant Gumbel but he covers the basics.

Then take a deep drop from the multi-million dollar announcing club. Think freelancers, those folks who do all the college football games you see on Saturdays, on ESPN through ESPN3.

Their work has been cut by the pandemic. You don’t hear these guys as much on FS1, ESPNU or elsewhere because games are being cancelled, days in advance or at the last minute. We had some 15 cancellations this past weekend. Those voices have families to feed too. They’re not taking home the handsome paycheck of the network full-timers. Not close.

When I hear seven figure millions in pay, I think of inconsistencies, the smallish Manhattan apartment of pioneer Marty Glickman and his wife Marge, Red Barber’s modest retirement home in Tallahassee or Monte Hall making a mere $25 a game doing color on Rangers’ broadcasts in the 1950s. That  before Let’s Make a Deal fame. Then there was Ray Scott who said that the most he made for calling a Super Bowl on CBS was $800. Despite his glittering credentials in the 1960s and 70s, Scott never reached financial independence.

Back to Joe Buck, he writes in his entertaining autobiography Lucky Bastard that dad Jack used the back of napkins to often assure himself that his assets totaled $1 million. That was years after local and network fame, lots of private school tuition for a big family and never multi-million dollar paychecks. Curt Gowdy never made big dough either as an announcer but he had great success in business, buying and managing radio stations.

Jack Whitaker was asked in his later years whether he regrets not making the big money voices make today. His humble answer was that he made more in his life than he ever thought he would. Already in his 90s when asked, Whitaker didn’t look back. He lived comfortably and felt accomplished.

There’s Vin Scully who I’m sure was paid handsomely as both a Dodger and network announcer. But how much have networks, online video purveyors and others made running Vin’s highlights through the years. He doesn’t get a dime when they do. So from that viewpoint, particularly when considering Scully’s greatness, you might argue that he deserved a heftier salary when he brilliantly called games.

Do network announcers, good or bad, affect ratings? Probably not. Yet networks are about giving their production a first class look and feel. They’ll tell you it is about maintaining the best in class. Money is one thing. NBC, CBS and Fox also often provide their top announcers chartered aircraft, traveling to and from games, especially now in Covid days.

Through all this, ESPN and Fox don’t always travel announcers to the ballpark, which to me is penny wise and pound foolish. Broadcasters working from home studios are limited.

Then again I remember a story shared by Duane Kuiper, the Giants announcer. He spent one season doing the Colorado Rockies’ games. His partner was the late Charlie Jones, a multi-decade network football voice. One day on the road, they were heading to the ballpark from the hotel. Charlie was accustomed to the network lifestyle. He told Glen, no ordinary taxis for us , we take limos to the ballpark. Look the part, he said.

I guess it’s about the optics too.

For some reason I’m reminded of the story of Eugene Meyer, whose daughter was Katherine Graham–as in, The Washington Post. He was a multimillionaire and told the staff during the Depression when they weren’t getting pay raises–but he had restored their pay cuts–that these were tough times; he hadn’t even been able to add to his collection of French Impressionists. The question is always one of value. Madden was worth that much to the network for which he worked. Romo may bring in viewers and ad revenue. As good as Nantz–and Buck and Tirico, for that matter–may be, what’s the… Read more »