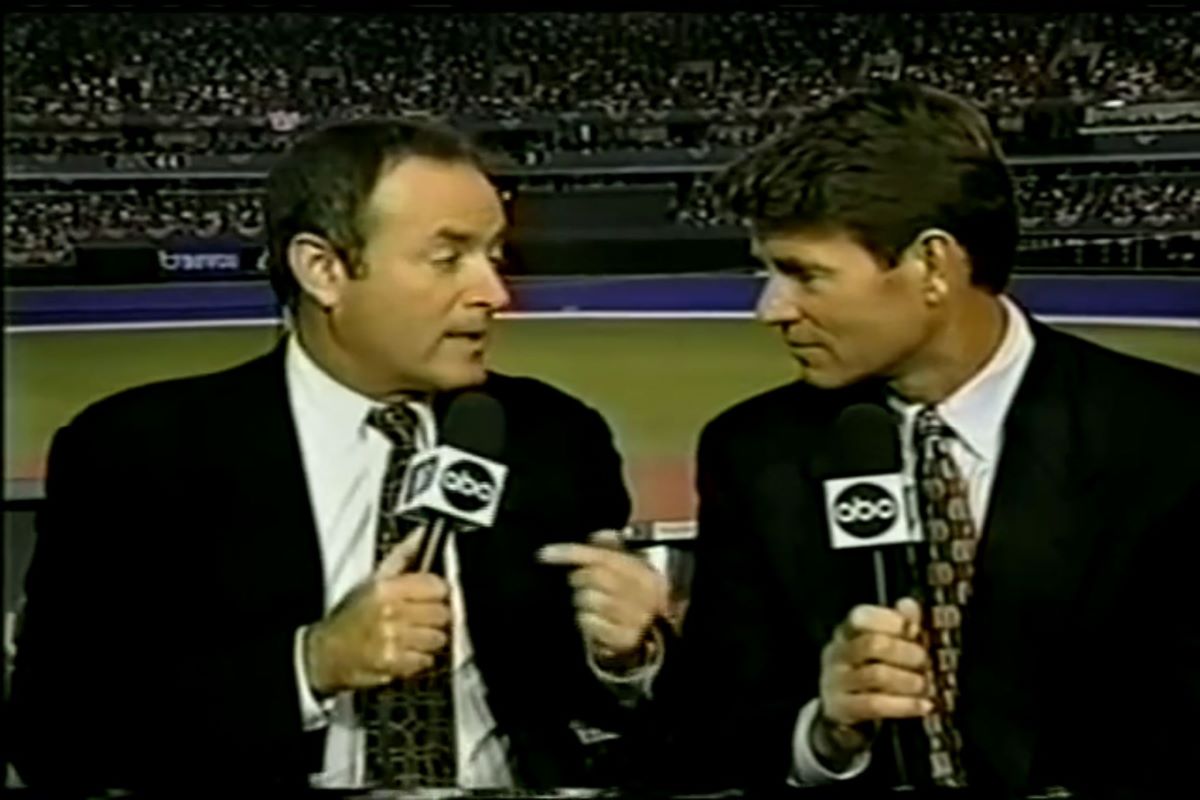 In 1783, Edmund Burke rose in the House of Commons to praise a colleague. “He may live long,” Burke said, “he may do much; but here is the summit. He can never exceed what he does this day.” Al Michaels has done much in a third-of-a-century of baseball play-by-play. Though he climbed the summit airing 1980 Winter Olympics hockey, his real love is the pastime.

On July 24, Michaels will receive perhaps radio/TV’s most surpassing single-sport honor: the 2021 National Hall of Fame and Museum Ford C. Frick Award for “broadcast excellence.” Al likely will evoke his mid-century youth in Brooklyn: each weekend at Ebbets Field, his family seated high behind home plate. Looking down, Al eyed Dodgers Voice Red Barber and thought, “What a job! Can you imagine seeing every game for free?’”

In 1954, Vin Scully succeeded the Redhead as Brooklyn’s de-facto lead voice.—“two best Voices, and I get ’em both,” said Michaels. Scully worked under Red for four years before Barber moved to the Bronx. Then, in 1958, by coincidence, his father, an agent, moved the clan to Los Angeles the same year the Dodgers pulled up stakes. A decade later—in the stars, or cards—Al majored in Arizona State University radio/TV, his first job re-creating the Pacific Coast League Hawaii Islanders from a Honolulu hotel.

Segue to 1969. Re-creating the Isles’ home schedule, Al was voted Hawaii “Sportscaster of the Year.” Next season he appeared as an attorney in an episode of the original Hawaii 5-0, the first network TV series shot almost entirely on locale. Leading man Jack Lord was a marquee cop as Steve McGarrett, his 1968-80 show hugely popular. Even a brief wisp on the CBS series added to Michaels’ cred.

In 1971, Al left Oahu to become Voice of the Reds. A year later he did the the-then-best-of-five 1972 National League Championship Series. Two of the first three NLCS had ended prematurely. Michaels’ debut went the five-set max. Pittsburgh led the final, 3-2, Cincinnati batting in the ninth. “Hit in the air to deep right!” said Al. “Back goes Clemente! At the fence, she’s gone! Johnny Bench, who hits almost every home run to left field, hits one to right! The game is tied!”

With two out, the pennant led off third base. “In the dirt—it’s a wild pitch!” Michaels yelped. “Here comes [George] Foster!…Bob Moose throws a wild pitch, and the Reds have won the National League pennant!” Al then aired NBC’s four Series sets in Cincinnati. By 1974, relations with Reds GM Dick Wagner were strained over both what Al could and couldn’t say in the booth and his salary. Al later said that he tripled his salary when he joined the Giants, evincing humor largely hidden in Ohio. He observed of a crowd size: “1967. That’s a … great year for Inglenook Wine. Not so good for the Giants.” He called one score “at the end of six [innings]: San Diego 9, the Giants 9. Unfortunately, the Giants are playing in German.”

In 1976, Al joined ABC TV’s backup Monday Night Baseball game. Its hitch: “a football guy [Keith Jackson] on [the primary set]!” TV Guide later said. “It was no secret that Al was miffed that network execs took their sweet time making him No.1 announcer.” He broadcast that year’s NLCS, then the 1978 Dodgers’ four-game W. “Hit into center field for a base hit!” Michaels said. “Ron Cey being waved in! And it allows the [pennant-]winning run as it gets by [Philadelphia’s] Garry Maddox!”

John Milton wrote, “They also serve who only stand and wait.” Despise media praise, Al must have asked when patience would be repaid. In 1981, he and Jackson again split the Series. Having won all but two of previous 10 Series v. the Dodgers, the Yankees took a 2-0 game lead. The son of Flatbush then did Sets 3-5, the ex-Brooks taking each in LA. ”[Bobby] Murcer tries to lay one down,” Al said in Game Three.  “And Cey makes a diving catch in foul ground!  Throws to first!  Double play!”

Michaels announced the 1983 Series and 1984 All-Star Game: to critic Jack Craig, “present[ing] a rare chance for those without cable to see ballplayers known ordinarily via box scores.” Under baseball’s 1983-89 two-network pact, ABC got the Classic every other year, Al handling 1985’s. Typically, Cosell could not leave well enough alone. On its eve, he released I Never Played the Game, a book savaging almost anyone with whom he had ever worked—especially  Michaels.  Said S.I.: “ABC was afraid of an on-the-air scene,” cashiering Humble Howard on the Royals-Cardinals Series.

Replacing him at the last minute, Tim McCarver meshed with Al. “It was like working a jigsaw puzzle,” said Al, “and finding all the pieces.” In Game Six’s ninth inning, Dane Iorg tied the Fall Classic for Kansas City. “And there’s a blooper to right field for a base hit! [Onix] Concepcion scores! Here comes [Jim] Sundberg! Here comes the throw! He scores!—a [2-1] thriller.” Next night “We go to the ninth”—an 11-0 KC laugher. “High fly ball! [Darryl] Motley is going back to the track! No outs to go! The Royals have won the 1985 World Series! ”

A year later USA Today’s Rudy Martzke termed ABC’s booth baseball’s “best team” over NBC’s legendary Scully and Joe Garagiola. It shone in the 1986 ALCS. A strike from tying the series in Game Four, Boston lost, 4-3. Next day it led, 2-1, when Dave Henderson “knocks Bobby Grich’s ball over the wall for a two-run homer!” Al said. By the ninth, up, 5-4, the Angels an out from a flag, Henderson went long: “[Brian] Downing goes back! And it’s gone! You’re looking at one for the ages here!” The Red Sox won, 7-6, ultimately taking the LCS.

How could Michaels top the topper? He already had in what ESPN’s 1999 SportsCentury styled our all-time greatest non-baseball or -football game. In 1980, Al broadcast only his second hockey set, chosen since no network Voice had done even one. “Do you believe in miracles? Yes!” Al yelped famously of “The Miracle on Ice” in the last seconds of America’s 4-3 spell-binding defeat of the Red Army hockey team in the February 22 semifinal at Lake Placid, New York.

The Friday U.S.-Soviet Union game was tape-delayed for prime time. Hours earlier, many listened live by radio, horns honked in joy across the States: the globe’s best team losing to our kids. To find a phrase worthy of such emotion, in a sport Michaels barely knew, in his second of nine Olympics, defines his career: “I can’t think of anything that would ever top it,” Al said, not even Sunday’s final, America beating Finland for the Gold. It is how tens of millions will always remember him.

What impact could last as long? Only an event’s as grotesque as 1980’s was glorious. On October 17, 1989, clear and warm—earthquake weather—Al hosted ABC’s A’s-Giants Series pre-Game Three. At 5:04 p.m., PDT, he yelled, “I’ll tell you what, we’re having [7.1 Richter scale] an earth …”—the feed cut as Michaels, McCarver, and Jim Palmer hit the floor. ABC restored audio 15 seconds later, Al musing, “Well, folks, that’s the greatest open in the history of television.” At Candlestick Park, generators revived the TV picture before the crowd filed out, the quake killing 63 in the Bay Area.

The three-time National Sports Media Association Voice won his first news category Emmy Award, relaying reports to Ted Koppel at ABC’s DC bureau. After a 10-day delay, the Series resumed. That offseason CBS landed 1990-93 network exclusivity, ending Michaels’ niche as a regular big-league Voice, “tough to accept because baseball was such an early stepchild at ABC and had come such a long way,” he said. For Al,  ABC baseball, slowly naming him its No. 1 mic man, too quickly went away.

At contract’s end, CBS chose not to renew, NBC and ABC siring the 1994-1995 “The Baseball Network [TBN]”: a format that began in July, sans day or national exposure, and aired only 12 games yearly, but let Michaels and Bob Costas split Series play-by-play. Fox, NBC, and ESPN then inked a 1996-2000 pact, Al’s only later network baseball on 2003’s ESPN—and with Costas for 2011’s Giants-Mets match on baseball’s new in-house MLB.

All told, the five-time Sports Emmy honoree will take a vitae including eight World Series, 10 Super Bowls, Sunday and Monday Night Football, racing’s Triple Crown, the Walter Cronkite Award for Excellence, a Star on the Hollywood Walk of Fame, and the Frick to Cooperstown—to the Kid from Brooklyn, the last perhaps best of all. Once wanting to be Red Barber, he has reached the summit as himself.

CURT SMITH is the author of eighteen books, including the forthcoming Memories from the Microphone (August 5, Mango Publishing).

May I say for the record, with no disrespect either to Michaels-Palmer-McCarver or Costas-Kubek, Martzke was wrong about the best crew. I’ve always wished Michaels had found a way to get to the network that had baseball. But in his autobiography, which is a great read, he talks about loving baseball (and his account of an encounter with George Clooney is related to that, and both hilarious and poignant), but also always having wanted to be the Curt Gowdy type who did it all. And he has, and is a deserving recipient of the Frick Award. I hope Bud Blattner… Read more »