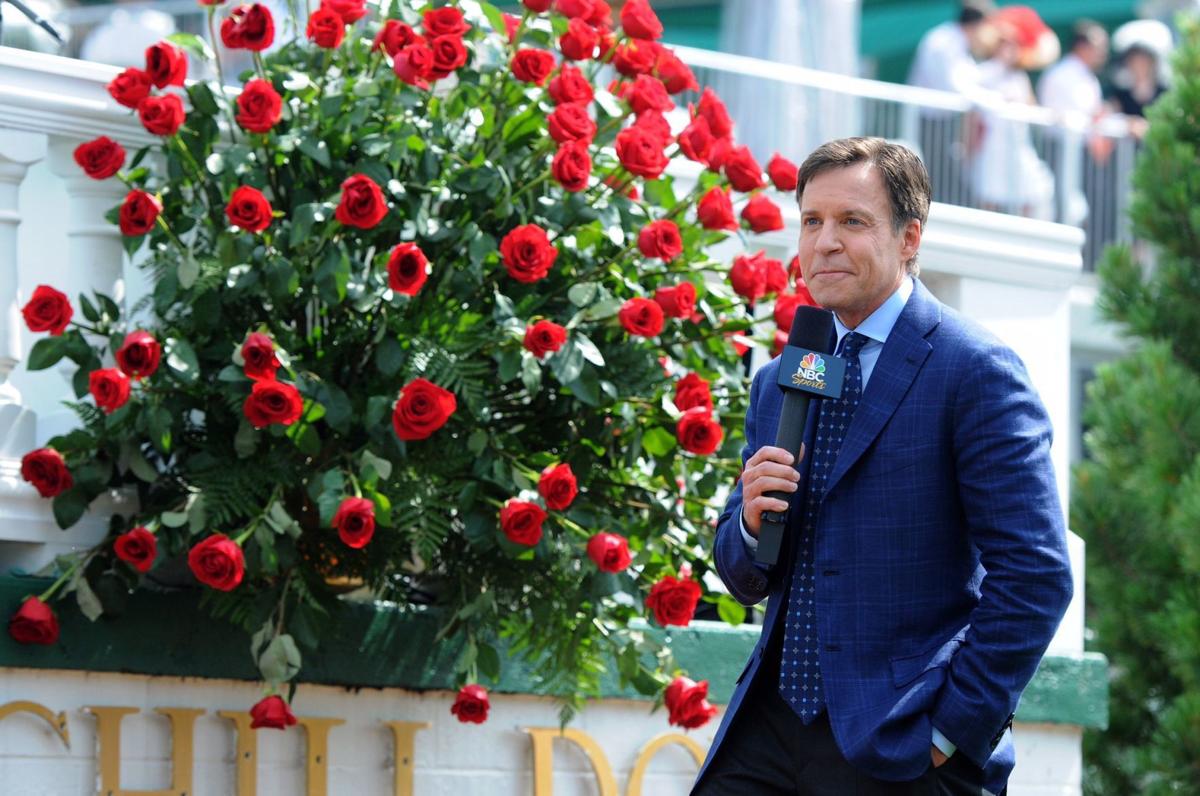 I checked in with two seasoned gentlemen who for 16 years co-hosted Derby telecasts, Bob Costas and Tom Hammond.

Costas covered eighteen straight Kentucky Derbies, beginning in 2001. His last was a year ago when Justify won the Triple Crown.  The iconic studio host says that his role was often largely ceremonial. At Churchill Downs for instance, Costas routinely  introduced the Kentucky governor and interviewed the owner of the winning horse.

Bob was out west Saturday where he watched the race and he was full of praise for Mike Tirico. “Mike’s a very strong talent. He proved again, as he did at the Olympics last year, that he’s a superb generalist.”

Costas added that NBC is extraordinary at presenting an event like the Derby, a two minute race, and building it into a multi-hour extravaganza of television. Events like the Triple Crown and the Olympics, he says, are where NBC really shines. The Syracuse alum added that the telecast appeals to viewers who might only watch the Derby and the Preakness. And if there’s still a Triple Crown horse in contention, the Belmont will do well on television too.

“The production covers it all, the fashion, the slice of Americana and all the details of the race, the horses and the participants,” Costas says. He gave a special shout-out to NBC producer, Rob Hyland. I asked Bob if NBC’s Hyland is related to the famous Bob Hyland who built St. Louis’ KMOX into a ratings behemoth. He said, “Yes, Rob’s Bob’s grandson.” Costas started his career working for Bob Hyland in St. Louis in the 1970s. “Rob would always ask me to share another anecdote about his grandfather,” Costas added.

Does Costas miss the big NBC stage today? ”No, I have no misgivings or pangs of regret,” he said. After serving as the network’s primetime host for eleven straight Olympics and as the face of the network’s biggest sporting events, Costas left NBC late in 2018, after 38 years. Bob was all of 24 years old when be launched his network career, calling NFL games for CBS in 1976.

“I do miss the people, colleagues, the pageantry and the feel of big events like the Derby, but I’m glad I’m done.”

As for Hammond, he was the perfect man in the Triple Crown host chair. Tom was an equine major at the University of Kentucky and was raised in the Bluegrass State around the horses. His profound passion for the sport was palpable each time he presided over NBC’s Triple Crown events.

Unlike Costas, Hammond was at Churchill Downs on Saturday. After he watched the race in person, he saw the television replay at his Kentucky home.

If you like excellent talent at any level and in any industry, you’ll love Tom Hammond. He came to work quietly each day and left quietly. Tom never made a big deal of himself. “It’s all about the event,” he says.

Hammond  was understated and handled his NBC tasks glowingly. His track and field work whether at the Olympics or elsewhere was electric. When he did the NBA for the network, behind Marv Albert, his  performance was admirable too. In Kentucky, Hammond saw lots of college basketball but was quick on the learning curve adjusting to the pros. He also did the NFL and Notre Dame for the peacock network.

As far as Saturday’s disqualification at the Derby, Tom unequivocally agreed with the stewards. “They made the right call. In today’s climate, racing is under the microscope. It was a serious infraction. Had horses’ legs clipped, it could have been disastrous.”

I asked the knowledgeable Hammond whether Donna Barton Brothers who first interviewed Maximum Security rider, Luis Saez, should have queried him on whether he was concerned about a potential infraction. Tom told me that in retrospect the question can be asked, but from Donna’s position she couldn’t see the race and certainly the spot where the violation occurred. He says it would be unfair to hold her accountable for not doing so at that point.

“I thought NBC did a great job. The camera work was superb and producer Rob Hyland did a fabulous job as usual. Viewers saw those faces and the emotion of the trainers and the riders. You can see how trainer Jason Servis was overcome with the result and the stewards’ decision.”

Hammond likes the qualifying point system that the Derby introduced years ago. He thinks it’s working. It’s a crowded race but the horses he says have earned their spots for the coveted event.

Unlike Hammond who spent tons of time around the track, Tirico is from Queens. I asked Tom about him. “Mike did a real good job. He was enthusiastic, knowledgeable, prepared and turned things over to the experts, Randy Moss and Jerry Bailey for elaboration.” As for Bailey and Moss, Hammond said that when the right replay angle was found, neither held back. At first, it was hard to see.

Hammond worked the Korean Olympics and is talking with NBC about possibly doing the Tokyo Olympics in 2020. Otherwise, Tom is engaged with his alma mater, the University of Kentucky, assisting in a massive fund raising project.

Tom had a special feeling for the late Dick Enberg whom he considered a mentor.

I asked him about legendary NBC boss Dick Ebersol, “He insisted that we weave in stories. It was great advice.”

Looking back at his years broadcasting racing, “In 1978, I was in race-caller Chic Anderson’s booth when Affirmed won the Triple Crown. I covered lots of racing afterward and then capped it when American Pharoah won the Crown in 2015. I’ve had a great ride.”