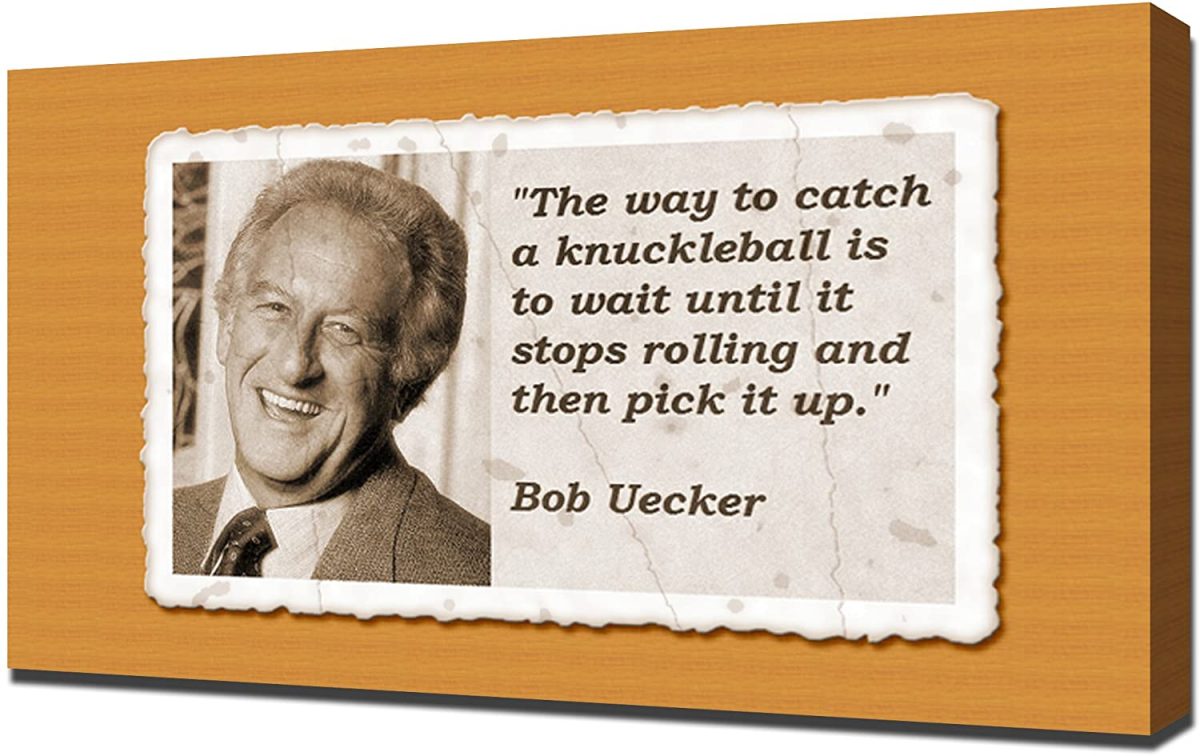 Today continues our look at radio/TV Voices of all of baseball’s 10 post-season teams. It is written by Curt Smith, former Speechwriter for President George H.W. Bush and author of 18 books, including the 2021 Memories from the Microphone: A Century of Baseball Broadcasting.

The series features an announcer from each club who represents that franchise: current, retired, or deceased. Today, we profile the incomparable Bob Uecker, whose Milwaukee Brewers lost to the Atlanta Braves in the National League Division Series which ended yesterday.

Peter Uebberoth later got the job, but Uke survived nicely as “Mr. Baseball,” Johnny Carson’s sobriquet. Sports Illustrated hailed “the funniest man in broadcasting”—a stand-up comedian, movie and TV star, and 1967 Atlanta Braves, 1976-82 Monday Night, and 1971-2021 Milwaukee Brewers avatar. His memoir referenced a prior vocation with the Braves, Cardinals, and Phillies: Catcher in the Wry.

Uecker’s humor was dead-pan, impromptu, and gently mocking, leaving a listener to wonder what was real or fictive. He mined his script from biography and fantasy: born January 26, 1934, he joked, on “Mom and Dad’s oleomargarine run to Chicago because we couldn’t get colored margarine in Milwaukee, in an exit area, sort of a Nativity-type setting, the light shining down and three truck drivers present.”

To know Uke meant grasping his home town: a “lunch bucket family type, Eastern European kind of place,” 1920s emigrants to Milwaukee including Sue and Gus Uecker, a Swiss homemaker and tool and diemaker, respectively. Years later Monday’s Al Michaels asked about his pop. “He came from the old country” and played soccer, Bob replied. Did Gus play goal? “Oh, he didn’t play anything. He just blew up the balls. That’s where I get a lot of my talent.” 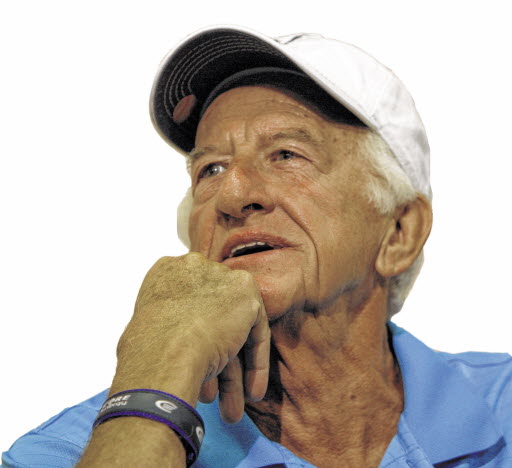 By eighth grade, Uecker made a team. Trying to help, “Mom made me wear a protective cup from a flour sack.” Dad was a true fan: “He booed me, too.” In 1953, the Braves arrived from Boston, Uke’s tryout ending after he was told to throw a fastball. “I was,” he said, Milwaukee inking him for $3,000. “That bothered my dad, because he didn’t have that kind of dough. But he eventually scraped it up.”

In a sense, Bob Uecker’s life pivoted around Wisconsin acquiring the Braves of Boston since 1876. Brewtown fixed to kill its new town with love. A downtown parade led to the Schroeder Hotel. “People put up a Christmas tree,” said ‘50s Milwaukee relief pitcher and 1962-64 announcer Ernie Johnson. “Since we’d missed Christmas that December, they said let’s celebrate it now.”

“We’d go into [last-place] Pittsburgh, and the park’d be full,” said radio Voice Earl Gillespie. “Wrigley or Ebbets were jammed.” Baseball’s smallest city became its capital, leading the big leagues in 1953-58 attendance, its river of handclapping running through the Midwest. The Braves were the first franchise to change sites in half a century. In 1966, it would move again, to Atlanta.

Milwaukee’s first native to become a Brave joked that in 1956 he had signed in a “swanky restaurant,” thrilling Dad, so excited that “he rolled down the window and the hamburgers fell off its tray.” Bob was assigned to Class C Eau Claire, traveled the minors, and affected being named 1962 minor-league “Player of the Year”: impressive, he said, “considering it was my second big-league year.” Then, in 1964, Uecker joined the Cardinals, who lost the first game he appeared in, then won the next five.

St. Louis took a final-day pennant. Before the Series opener, three bands played at Busch Stadium. Uke grabbed a tuba, declined to blow—“Nothing to prove. Folks knew I had hot hair”—but used it to shag fly balls. A year later he was dealt to Philadelphia, “fans so tough they go to the airport to boo bad landings.” Bob quipped that the third-base coach turned his back on the lifetime .200 hitter. “Worse, the catcher skipped the sign to the pitcher. He’d just yell what to throw.”

Through 1967 Uecker sat in the bullpen, “talking into a beer cup” and plotting script. That year, he rejoined Atlanta’s transplanted Braves before retiring to become their good-will ambassador, frequently speaking and learning spot-on timing for what Uke termed “stand-up, weird and ignorant stuff about my career—anything for a laugh.” Anyone who saw him play, Bob said, knew he had “plenty of material.”

One night Uecker performed at pal Al Hirt’s Atlanta night club, leading to TV’s Merv Griffin, Mike Douglas, and more than 100 spots on Johnny Carson’s The Tonight Show. How do you catch a knuckler? Wait till it stops rolling and pick it up. Who held the record for passed balls? He did. “But [at least] I met a lot of people in the box seats.” His reviews were better as a comic than scout, which Brewers owner Bud Selig named him after the 1970 American League Seattle Pilots moved to Milwaukee. “Worst I ever had,” Bud said, the report “smeared with gravy and mashed potatoes.”

Next year WTMJ Milwaukee hired Uke, his stand-up routine at variance with Bob’s balls and strikes approach, repeating count and score. Trying not “to wisecrack my way through it,” Uecker evinced his parents’ ethic. By 1980, he succeeded Merle Harmon as Voice of the team, broadcast director Bill Haig saying, “People who know him through his comedy expect him to be like that and they’re surprised when he’s not.”

Once Humble Howard barbed that since Bob was a philistine ex-jock he couldn’t possibly know what truculent meant. Uke didn’t miss a beat: “Sure, I do, Howie. If you had a truck and I borrowed it, that would be a truck you lent.” In 1983, Uecker left to further his image as the comedic sap who embodied Everyman’s “memories of being rejected, of someone stomping on us,” said a talent representative of sponsor Miller Brewing Co.

Bob starred in the ABC comedy series Mr. Belvedere, hosted Battle of the Network Stars, and played boozy play-by-play man Harry Doyle in Major League I, II, and III. “Juuust a bit outside,” he called a pitch to the lower deck. A batter “crashed one toward South America.” Miller TV spots also began starring him and other Miller Lite All-Stars. Uke’s wed caricature and naivete, his persona the poor soul, the hapless naif.

“His caricature [as] the poor knucklehead who keeps getting locked out of bars and dumped on by fans gave him …a cult following,” wrote S.I.’s William Taaffe. In one spot, Bob heads for a box seat, bragging about getting “freebies to the game. [I just] call the front office—Bingo!” Told he’s in the wrong seat, he assumes an upgrade. “Oh, I must be in the front rooow!” We see him next in the upper deck, shouting to those nearby, “Good seats, eh, buddy?”

Despite fame spinning beyond the sport, Uke never left Milwaukee. In 1982, his Brew Crew won a pennant, LCS, and 11-0 Series opener. Paul Molitor had a record five hits. In seven games Robin Yount twice got four. After St. Louis won the Classic, the Milwaukee Sentinel wrote, “A stadium rally will welcome the Brewers home.” Yount entered on a motorcycle to the chant “It [losing] just doesn’t matter.” In 1997, the city rejoined the National League. “Wow, I get to cover teams I rode the bench for,” said Uke, forever bonding.

“Planted a new crop,” went one letter from a listener. “Another: “Son got married.” He read them on the air—“even ones that say, ‘You stink.’” Bob had a back operation, retired from network gigs due to rehabilitation, and named his “greatest thrills”— escaping a rundown; winning a set by walking with the bases full; watching from the upper deck; making most games; and hearing games on radio that he didn’t.

Increasingly, actor and announcer fused. In 2003, the five-time Wisconsin Sportscaster of the Year got the Hall of Fame Ford C. Frick Award for “broadcast excellence,” giving a laugh riot acceptance speech. “I am honored,” said the banjo hitter. “But I still think I should have gone in as a player.”

In the end, Uke should be deemed as twinned. One man is factual. Never having a Brewers contract—simply shaking hands before each season—he aired his city’s return to baseball, Yount’s 3,000th hit, and three network All-Star Games, eight LCS, and five World Series.

The second is phantasmagoric. In 2001, the Brewers left County Stadium for Miller Park, where 106 $1 obstructed upper-grandstand level seats were named “Uecker Seats.” In 2014, a statue of Bob was unveiled in the last row. Another stands outside the park. In a Miller spot, Uke says, “Ah, those fans, I love ’em.” The feeling is reciprocal, baseball and his artistry the other’s best friend.