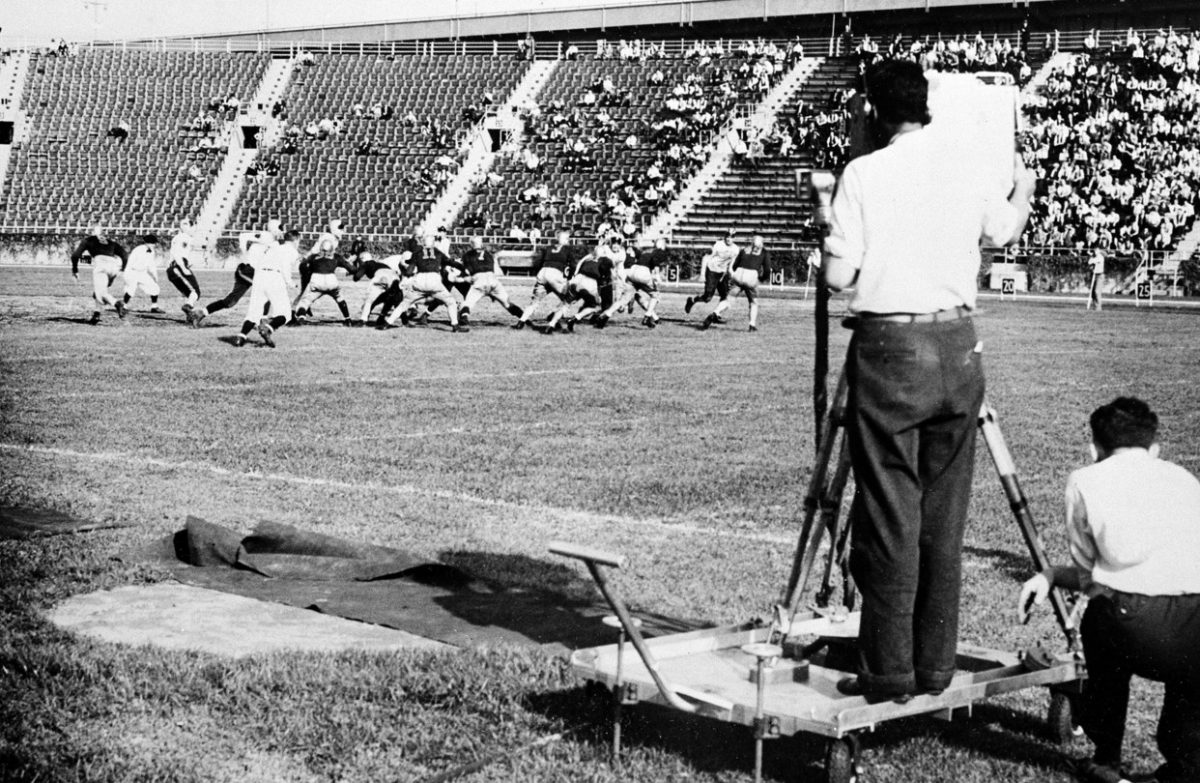 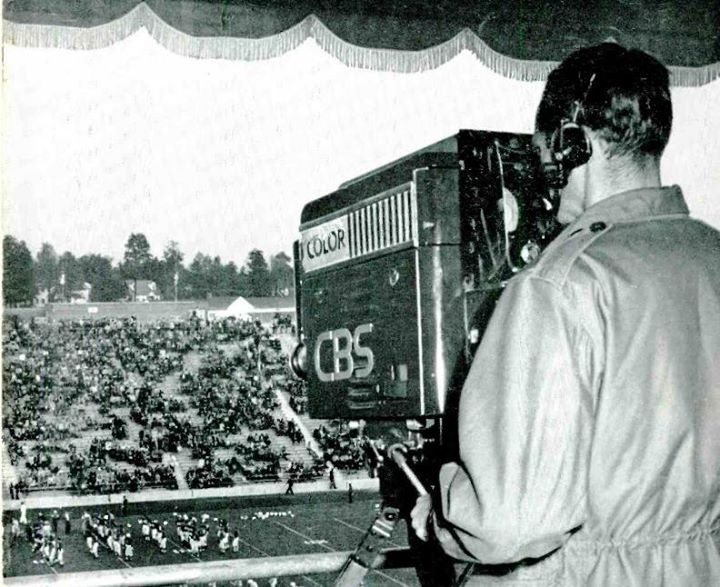 Next Saturday, October 5th, Duke will host its ACC home opener against Pitt.

But little did the recent schedule makers know that when the two teams played 68 years ago today, September 29, 1951, it was the first coast-to-coast telecast of a college football game or for that matter, any sporting event at all. Duke won 19-14, advancing to 2-0. The following week, the Dukies fell to Tennessee, the eventual AP and Coaches Poll national champs.

That September 29th was a busy day for the historical Gods. In Philadelphia, a football game between the University of California and the University of Pennsylvania, was televised in experimental color or whatever first generation color looked like then. There were only a precious few sets able to receive the color signal and the telecast was picked up only in a few test markets.

These two events go down in the annals as firsts but in 1950, a year earlier, only 9% of American homes had television sets. The medium of course erupted through the decades. By 1955, 64% of the country had sets and by 1960, it was 87%. Television in the 1950s was what SmartPhones and mobile devices are today. Novel to many.

A dozen years earlier, on September 30, 1939, Fordham University played Waynesburg College at Triborough Stadium in New York and it was on W2XBS (the forerunner to WNBC TV). It was hardly a sophisticated production. Just one camera and one announcer, Bill Stern. He and Ted Husing were the two most famous sportscasters of the time. For years, Stern was associated with NBC and Husing with CBS. It was a showcase telecast for the attendees of the New York’s World Fair, eager to get a glimpse of the future.

While the war years were hardly progressive ones for television, football telecasts began to mushroom somewhat in the late 1940s. There was no NCAA governance and some schools toyed with independent telecasts, albeit there was just a paucity of television sets and not many to watch.

Remember the first World Series was on television in 1947 and only in limited markets. The first Series that aired through much of America was in 1951 and the first in color was in 1955. There weren’t many color sets then and those who had it, didn’t experience anything near HD quality. The first NFL championship game was in 1951 on the now defunct Dumont Network.

By 1950, Dumont picked up Notre Dame and Penn games, triggering concern from NCAA members that television would hurt attendance.

So in 1951, the governing body stepped in to police the practice. Quoting from a study by John J. Siegfried and Molly Gardner Burba of Vanderbilt University, sternly titled, The college football association television broadcast cartel, “At its 1951 convention, the NCAA revoked its then existing policy allowing each individual institution complete control over the marketing of its athletic events, a first step toward prohibiting broadcasts into areas where another Association member was hosting a game.”

According to the Vanderbilt report, the University of Pennsylvania then challenged the NCAA’s television authority. The NCAA responded by calling Penn, a “member in bad standing.” But Penn learned quickly that it’s tough to fight City Hall. After the Quakers’ first four visiting opponents cancelled their 1951 games at Penn, the school threw in the towel.

At that point, the NCAA essentially reigned supreme. For the next 32 years of regular season college football (1952-83), the NCAA controlled major rights to the telecasts. Through the mid 1950s, Americans viewed just one national game a week. At that point forward until the 1980s, the NCAA allowed regional telecasts in specified weeks.

The rights were awarded as follows:

On January 1, 1952, NBC televised the Rose Bowl coast-to-coast for the first time. The announcers were Mel Allen and Jack Brickhouse.

The 1954 Rose Bowl had the first color television “colorcast.” It was viewable on 200 sets across the United States. Mel Allen and Tom Harmon were the announcers. (Harmon was a gridiron star, military pilot, actor and sportscaster. He was born 100 years ago yesterday, September 18, 1919. He died in 1990. Tom also called UCLA football.)

At ABC, beginning in 1966, Chris Schenkel and Bud Wilkinson were the number one broadcast team. Keith Jackson took over as the lead commentator in 1974. He remained as such through the 1999 Fiesta Bowl and then continued in a more limited announcing role through the 2006 Rose Bowl.

Hodges was assigned NBC’s college football. The broadcasts were sponsored exclusively by General Motors. In those years, the sponsors had a powerful say in hiring announcers. According to Lindsey Nelson,  GM called NBC after the first telecast and demanded that Hodges be removed. Apparently, GM’s management felt that Hodges bore a facial resemblance to UAW leader Walter Reuther. (Hodges is in the photo on the left and Reuther is on the right.)

During the restricted television years, Notre Dame games were often syndicated for airing on Saturday nights and the telecast was condensed to a one hour show. Nelson did many of those games. It was essentially highlights +. Uneventful action was cut out of the truncated version. So Lindsay was often heard saying, “As we pick up the action in the 3d quarter…..”

in 1981, the NCAA was sued by the both the University of Georgia and Oklahoma, alleging anti-trust violations and demanding the ability to cut individual deals and not be beholden to the governing body. In 1982, the NCAA added deals with three networks, expanding the number of broadcasts. But it wasn’t enough.

On June 27, 1984, the college television world was turned upside down. The United States Supreme Court ruled that the NCAA telecasts violated Sherman Anti-Trust laws. Teams and conferences were allowed to go about their own merry way with television. The next season, there were some 200 games on the air. Remember that the schools had a buyer. ESPN was born five years earlier in 1979 and had a big appetite for play-by-play.

This weekend alone there were over 60  college telecasts and that doesn’t include games that are video streamed.

I know Halby has read Lindsey’s marvelous autobiography, so he also can tell the story of Hodges renting a Hudson to go to a sponsors meeting and Lindsey’s line that it was too much: Walter Reuther pulling up in a Hudson to meet with executives at General Motors! ABC took a bath on that 1954 contract, and thus NBC got it back–and then ABC was able to sneak in and swipe the rights in 1960, and that led to Roone Arledge producing the games and rising to the top, and the great crew of Curt Gowdy and Paul Christman doing… Read more »