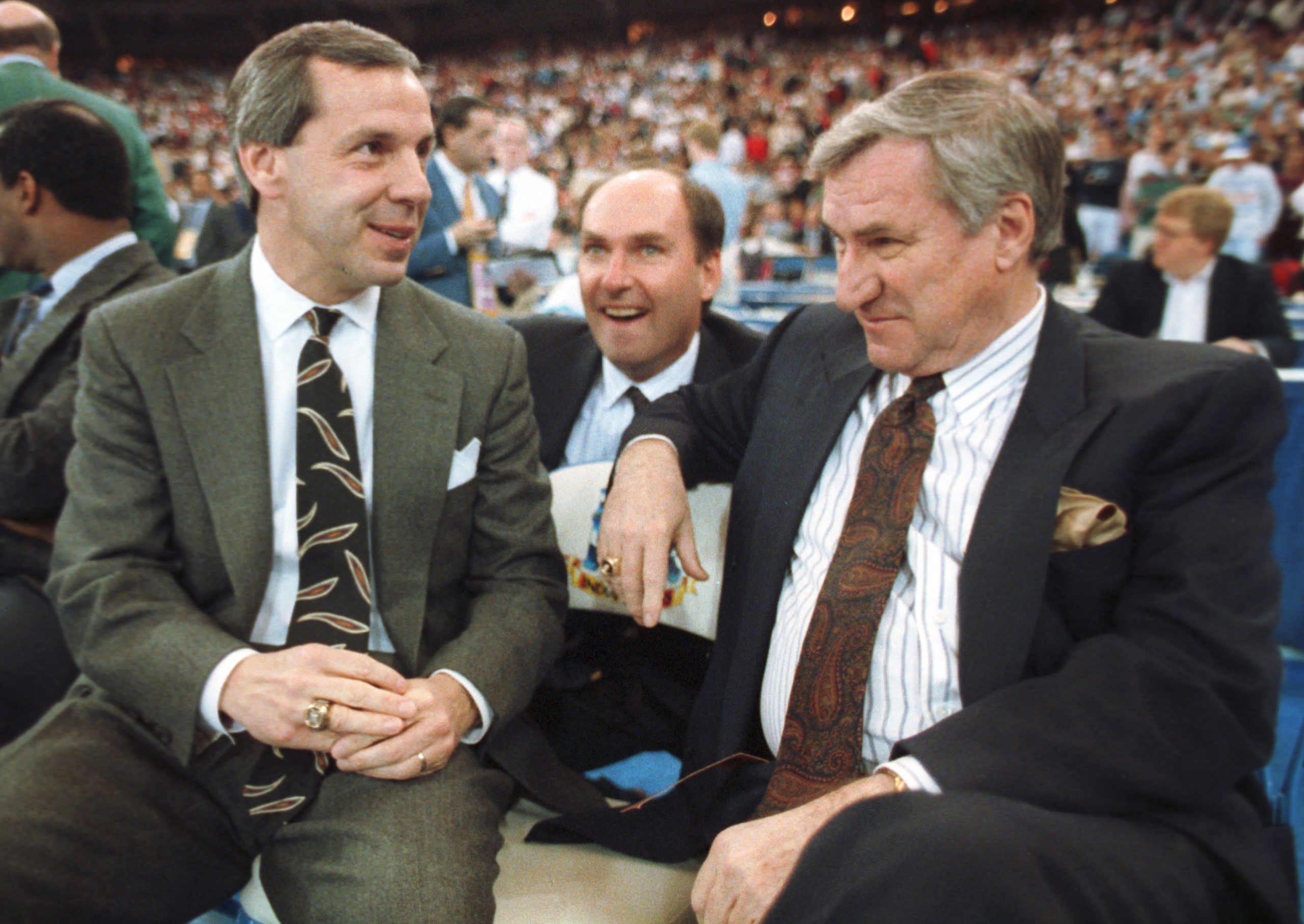 Tim Brando’s name is interchangeable with college basketball telecasts. He started covering the ACC Tournament in the mid 1980s.

In addition to all his national work, Tim’s been calling games for Raycom, a longtime syndicator of college hoops on regional television. With the launch of the ACC Network this fall, this is Raycom’s last ACC Tourney. After thirty plus years, Brando is savoring every last second of it this weekend.

Today, Brando revisits a few of his most cherished moments through his decades at the ACC championships.

My memories of the first ACC Tournament in 1985 are indelible; considering how the field was littered with future Hall of Fame coaches (Mike Krzyzewski, Dean Smith and Lefty Driesel) and players. Mark Price was the MVP. Standouts then included the late Len Bias, Tommy Amaker, Brad Daugherty, Spud Webb, Kenny Smith, Adrian Branch and Olden Polynice.

Wherever I went in Atlanta on the morning of the quarterfinals, the enormity of the event was profound. It was overwhelming. The ACC Tournament was a constant subject of conversation. The ACC then was comprised of eight teams. Today the ACC is made up of 15 teams.

The telecast was a joint effort between ESPN and Raycom/Jefferson Pilot. Executives were constantly scurrying. ESPN’s Steve Anderson teamed with Raycom’s production staff to synergistically produce the event for both networks. Fellows like Raycom CEO, Ken Haines, Mike Berg and others were passionately engaged.

Unlike regular season games, for which only a limited number of cameras were used, production for the ACC Tournament was given super-star treatment. ESPN brought down additional cameras to supplement its coverage. Everyone brimmed with excitement. The enthusiasm was contagious.

I said to myself on that very day of the quarterfinals, I would work with these guys again at any point. And I would. We were all young and I could only think to myself; Man, I hope I get to keep this assignment for a long time to come. Georgia Tech won it that year, led by Mark Price, Bruce Dalrymple, John Salley and others. I had them on my side of the assignment bracket through the semifinals.

The greatest memory of 1985 was getting to know our good friend, Bobby Cremins, the coach of Georgia Tech. Unlike many coaches at the time, he was accessible and gave generously of his time. Bobby was and remains a breath of fresh air! The next Al McGuire, I always said. I also met Billy Packer with whom I would work a few years later. And when NBC came down to televise the finals for a national audience, I spent time with the amazing Dick Enberg and the effervescent Al McGuire. Excellent broadcasters Marty Brennaman and Mike Patrick also worked that tournament. We \developed a kinship.

These high profile gentlemen made a large impression on me. I spent much time that weekend just watching them and learning the ropes. Observing these seasoned broadcasters all at once in a magical basketball setting was a magnificent experience for me, a young professional at that time.

In 1987, both semi-finals were settled in double overtimes and they were absolutely off the charts. The first game pitted the Heels and the Cavaliers.

Tom Sheehy, a 6’8” UVA forward, was known to woof or chat up his opponents. Legendary Dean Smith didn’t appreciate it, so under his breath Dean said a few things to Tom as the teams headed to their respective benches during a time out.

Cavs coach Terry Holland rarely got angry, but he was irate then. Terry didn’t want Dean talking to his players. Stalwart official Lenny Wirtz was working the game and got an earful from Holland. UNC won it in a double OT thriller, 84-82.

I worked with Dick Vitale on our ESPN/Raycom simulcast and at that point, we never expected the second game between Wake Forest and NC State to measure up to what we had just experienced in game one. Yet, it did!

Bob Staak, Wake’s head coach at the time, was actually a former player at Connecticut when Jim Valvano was an assistant coach there. They were close. The Wolfpack were right on the bubble, facing almost a mirror challenge of where they were in 1983 when they made their miracle run through the ACC and later the national title.

The game was a defensive battle. With a guy like Muggsy Bogues, the Deacons were a threat to beat anyone late that season. In the end though, the late Charles Shackelford was too imposing in the low post. He scored, rebounded and dominated the second overtime. He and Coach Valvano were on our post-game show.

The next day, in the final, Shackleford’s go to move was his left and right hand version of the sky-hook. Charles erupted for about thirty points from what I remember as the Pack won the tournament and got the automatic bid to the NCAA Tourney again!

Memories of ‘83 danced through the heads of everyone in the Landover press room after the game when a smiling Valvano brought Shack not to be confused with Shaq to the podium.

Adept with either his left or right hand, Charles fielded a question about his versatility. He smiled and gleefully said, “Well, Coach V says I’m amphibious.”  As raucous laughter filled the press room, Jimmy V put his fingers to his head like a gun, and said, “I love it! What do ya do?”

Continuing to work the ACC Tournament is just as rewarding to me now as a veteran broadcaster as it was back then. Calling the championship game for the past two years may be one of the greatest honors of my career. I look forward to doing it again this year.

The games themselves the last two years in Brooklyn were fantastic. But my greatest take away was how my colleague Wes Durham dealt with the loss of his father Woody, the iconic UNC broadcaster.

It was poetic justice I suppose that the Duke-UNC rubber match fell onto his side of the announcers’ bracket. Wes had never gotten to call a Battle of the Blues. I, too, am the son of a broadcaster and while my dad’s career was more entertainment than sports, his influence on me was like Woody’s was with Wes; palpable.

Wes was a pro dealing with something so emotional. He was fortunate to be able to lose himself in his craft, calling games, while bereaving his dad’s death. The mic can serve as a refuge of sorts from the indescribable pain of such a loss.

My dad died in 1985, the summer after my first ACC Tournament. I only spoke to Wes about it once, and I hope he’ll remember what I said. I know I’ll always remember the strength and professionalism he showed the entire week of the tourney.

I was reminded of the time Dean Smith got a technical for taking a step outside the box coaches were supposed to stay in, and there were rumors of impending tarring and feathering for the official who called it!