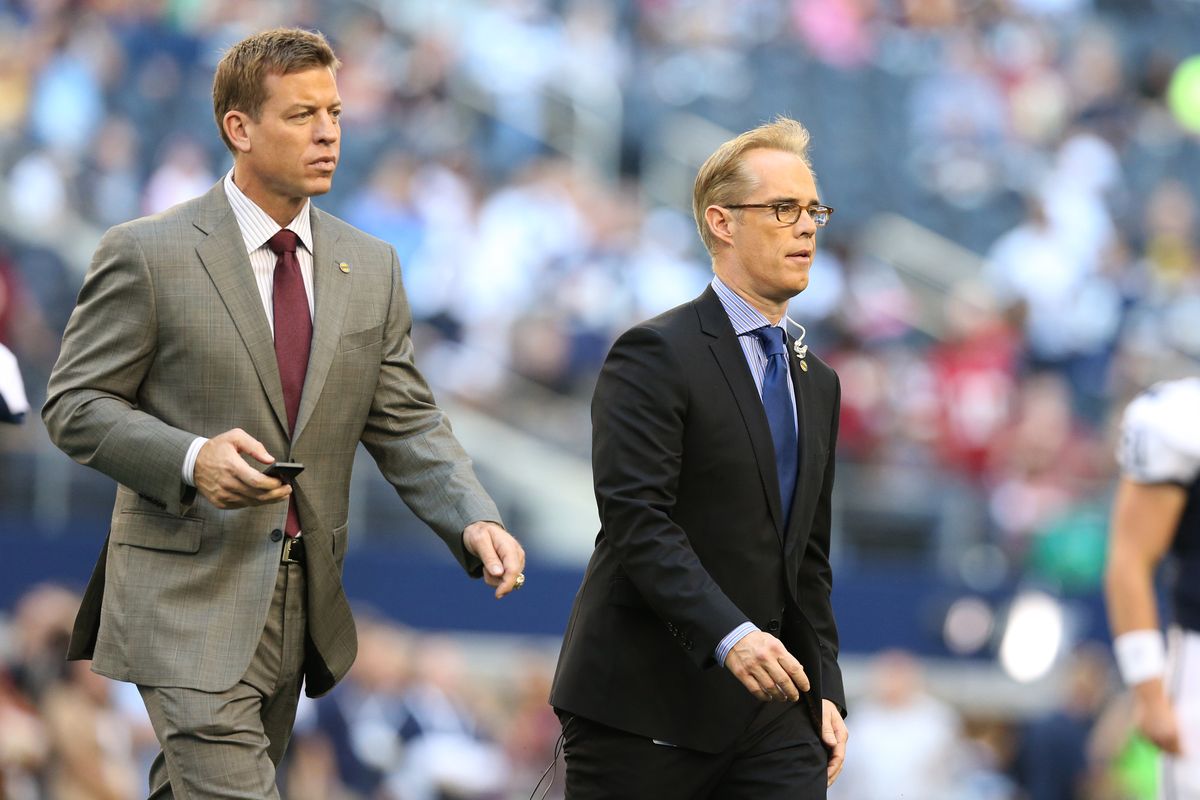 A few folks here in South Florida asked me to  differentiate the top network broadcast teams by style.

This is how I responded off the cuff:

In this millennial age, one intertwining and operative word characterizes an NFL-Fox broadcast. It is why. I get a sense that the edict is ‘leave nothing for the imagination.’ Show and explain the whys.

So indeed, Buck gets out of the way faster than Derrick Henry. Buck’s boss Brad Zager says that Joe calls games with verbal efficiency.

Partner Troy Aikman is right behind him. He delivers unapologetic explanations but they’re limited to the nuts and bolts of the game. That’s it. Troy doesn’t talk for the sake of talking. If he’s out of material, he shuts up. But it doesn’t mean he’s shy.

Buck presents play-by-play rhythmically; in rapid-fire, clipped staccato format. Aikman’s analysis is crisp and transparent. Neither one engages in the superfluous or extraneous.

If you tune in for lachrymose tales, you knocked on the wrong door. There’s little of it. They’re all business.

Who of the preceding generation am I reminded of listening to Joe? Tough to say. Joe is a minimalist. No network voice has embodied a classic minimalist style since Pat Summerall.

Pat would say that the greatest compliment he could get was that he called games like Ray Scott, the father of minimalism. But Summerall and Scott weren’t weighed down by today’s technology, all the repeated replays from all angles, booth reviews, yellow lines, blue lines, rules experts, ketchup, mustard and other condiments.

Joe is a revivalist of the minimalist age, in 2020 form. So the best comparison would be Summerall, albeit Buck doesn’t have Pat’s hollow voice. Scott was no more than an eloquent public address announcer.

Buck won’t hold back either on what he sees down on the field. When a brawl erupted in November’s Cleveland-Pittsburgh game, he said of Myles Garrett’s helmet swing, “That’s one of the worst things I’ve seen on a professional sports field.”

Off air, Joe is funny, quite a quipster. It’s too bad that we live in a heavy-handed television world of political correctness. If this was a generation ago, Joe would have all of us in stitches from kickoff to the final gun. Today, any funny crack and you’re playing with fire.

Michaels is the dean, the veteran. He’s been the Voice of NFL primetime for 34 years. I guess we can call him The Nocturnal Ace of NFL Television for all those years under the lights.

Longtime interviewer Roy Firestone calls Al, America’s play-by-play announcer. You might say that he’s defined how to call a game on television, not to talk too little and not to talk too much. Al brings no script. He’s just well prepared, very articulate and sounds natural. Therein the durability of his success, a network stalwart for five decades.

Collinsworth’s credentials are impressive. After his NFL playing days, Cris got his law degree. His broadcast roots were in Cincinnati where he was a radio talk show host. On network television, he’s been in the studio and doubled up with Aikman doing analysis for Buck on Fox.

At NBC, Cris mixes it up. At times, he sounds like an attorney and at others like a kid in a candy store. He can sound tough and he can be giddy. Of the three over-the-air network NFL analysts, Collinsworth is criticized the most for having perceived preferences of coaches and teams, and for taking polarizing positions on referee rulings. All social media nonsense.

Okay. Who is Michaels most like of the previous generation? Uncle Al, 75, has overlapped careers. Yet I would identify his two idols, Vin Scully and Curt Gowdy.

Like Gowdy, Michaels can do any sport seamlessly. When Al did the 1972 World Series with Gowdy, I can recall a bunch of us in college saying, ‘Who’s this Al Michaels? He sounds a little like Scully.’

Al’s confident but unassuming style has evolved over his fifty years in the business. He’s certainly himself and has been that way for decades. But he’s told others and me that when he did his first network game, he said to himself, “Let me just be able to open my mouth and sound like Vin.”

They both bring a warm and welcoming smile that makes viewers feel comfortable immediately.

Red Barber addressed listeners as friends. Vin Scully did and Nantz does.

Neither Jim nor Tony is verbally rigid, particularly guarded or programmed. Yet they’re prudent. Romo brings fresh exuberance, a neighborly tone and an educated rolling of the dice when predicting plays. Tony almost sounds like a buddy who has your back, whispering in your ear, telling you what to look for and what to expect. “I think Mahomes just figured it out,” he aptly told the audience when Kansas City began its comeback after trailing in the AFC championship. Tony doesn’t get too complicated either.

Jim unmasks the personal side of those under the helmets better and more so than any of his NFL cohorts. Nantz also produces the best work from his partners. Romo was a natural when he started but was still a novice. Jim brought him along and Tony was obviously quick on the learning curve.

Who of the preceding generation is Jim most like? Dick Enberg. There are times too that he reminds me of Vin.

When Scully did the famous NFC title game in 1981, he worked with Hank Stram on CBS. Right at the outset, when the Niners’ Ray Wersching was about to kickoff, Vin said something like, ‘In this great American game of football, the NFC championship could be decided by two foreign born kickers, Ray Wersching, an Austrian born son of a Yugoslavian carpenter and the Cowboys’ Rafael Septian, born in Mexico.’

Faces and personalities behind rugged bodies set the tone. Vin was unequaled at it and Nantz is wonderful doing so too.

Jim does so satisfying the difficult challenge of fitting in stories without interfering with the game.

I heard an interview with Curt Gowdy where he said producers would tell Paul Christman to talk more, and he wouldn’t because he felt he had nothing valuable to say. If that’s Aikman’s attitude, bless him.

It’s interesting how Nantz and Romo blend together so well when they are so different, while I think the other two crews blend well because they’re a bit more alike.