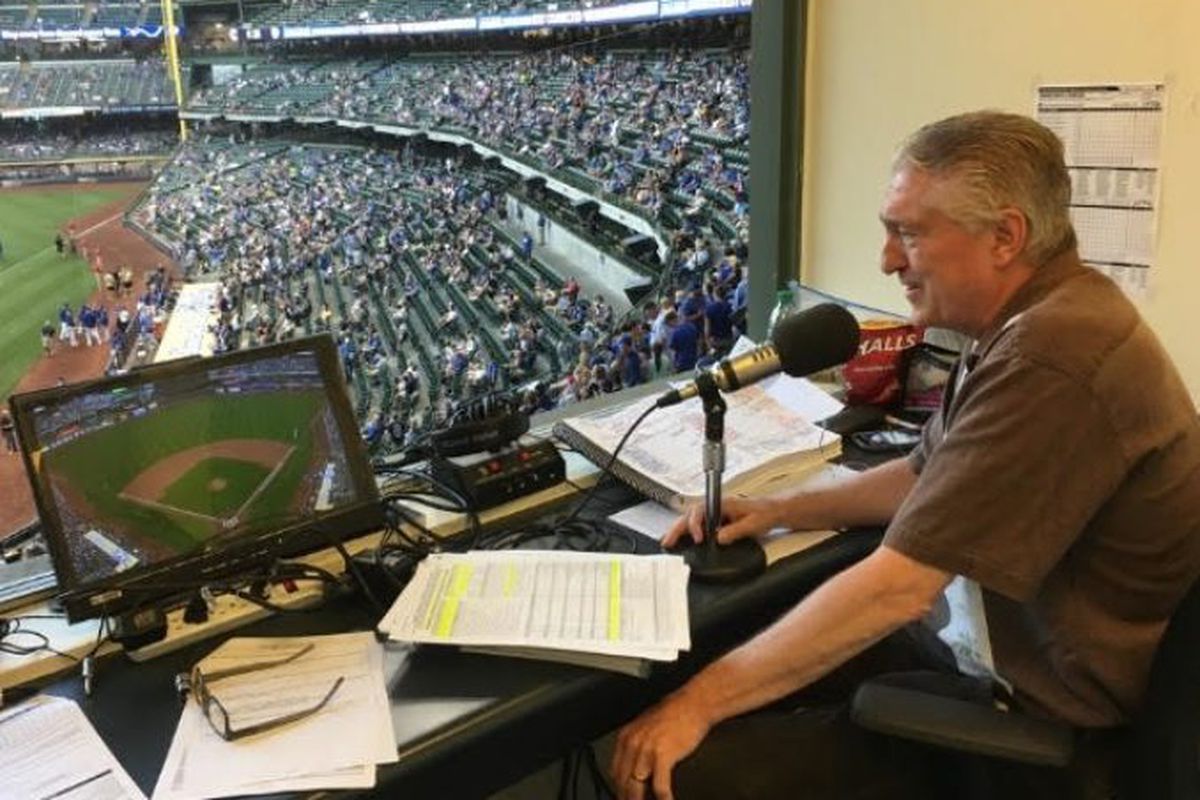 Pat Hughes, the Cubs lead radio announcer has developed a bond with the the club's fans. Ex play-by-player wonders if it's still possible, given the fact that just about every game is available on some sort of video feed.

MY CONNECTION TO THE RADIO

It was somewhere around 1968 or 1969. Growing up in Southern California, I learned the fun of baseball fandom. Along with it came listening to the radio following the Dodgers through the eyes of Vin Scully and Jerry Doggett. It wasn’t just me, it seemed to be all of Southern California. We were connected through the radio, even taking transistors to Dodger Stadium when we were there in-person. The key word is RADIO.

The Dodgers only televised 9 games those years, the ones from San Francisco. So, it was radio or reading about the game in the newspaper the next morning. There was no following it on Twitter or mlb.com. I didn’t listen to all 162. I’m sure there were a few 11:20 am starts from Wrigley Field while I happened to be in school. But I probably listened to at least 155 per season.

That experience led me to believe baseball sportscasting was the coolest job ever, but I’d never be able to do something like that.

But later at UCLA, I ran into a campus radio station and questioned that belief. Why not me?

And in the spring of 1979, I got my first taste; a UCLA/Cal game at soggy Evans Diamond in Berkeley with future big leaguers Tim Leary and Chuck Cary starting pitchers. The press box?  Oh yeah, there wasn’t one. There was just a table behind the backstop. Jon Teicher, the longtime voice of UTEP football and basketball mentored me.

But is sportscasting on the radio going the way of the Pony Express and rotary phones? I don’t think it’s going that way; I think it already has.

Today, working in the insurance industry, I often met at client’s homes (pre-pandemic). How many of those homes had a radio on when I arrived?  Few, if any. And how many even had a radio VISIBLE in their homes? Not many. And these were people in the demographic where you thought they might.

There is a mentality today that if a sporting event isn’t on television, it isn’t on.

CBS/Turner announced the NCAA tournament broadcasters. No mention was made as to who even has the radio rights now.

We lament the loss of a true radio broadcast in Toronto; yes a simulcast is a poor substitute. But it’s difficult to blame the bean counters making such a move. Isn’t it just one move of an inevitable wave?

It isn’t surprising to me that colleagues of mine from the old American Association; Steve Carroll, now with the Anaheim Ducks, Pete Weber, now with the Nashville Predators, Brian Barnhart, now with Illini football and basketball. All have dabbled in television but continue the bulk of their work today in radio. It’s where their hearts and souls lie. But for how much longer does it resonate with Americans?

Try finding someone 30 or younger today who follows any sports on radio today. Sportstalk? Sure. But radio play-by-play? Doubtful. I believe there’s an entire generation whose brains aren’t even wired to follow the intricacies of a sporting event without pictures accompanying it.

My words aren’t intended to change things or blast the decisions of the executives who de-emphasize their games on the radio. We will express disappointment in the next simulcast announcement from a professional team. We should no longer be surprised though. Next time you get a chance, sample some live sports on radio…while you still can.

What a wonderful tribute you wrote to Joe Tait. While I never worked on the same broadcast with Joe, I was in Cleveland for his early years as voice of the Cavaliers and traveled with him when I did Indians TV and Joe did the radio for the Tribe. He was an outstanding baseball announcer and as you wrote, maybe the best radio play-by-play guy ever in the NBA. He certainly was an influence on me.

I was always amazed that he kept his own basketball stats….and that included figuring the percentages himself without a calculator. He didn’t wait for the stats sheets to be printed.

So the Cavaliers have lost two giants in the last two years…..Joe and (TV voice) Fred McLeod who was my first broadcast partner in Major League Baseball on 1979 Indians telecasts…….very sad indeed…….

Your tribute to Joe Tait is spot on. As you know, I revered Joe as a mentor, who I was blessed to work with at the Illinois high school state basketball tournament in 1969. That was my first year of sports broadcasting, and I learned more in those two days with Joe than any other five year period of my career. One of my proudest moments in this profession is when Joe hired me to take his place at WBOW in Terre Haute, Indiana, when he left to take the job with the Cleveland Cavaliers. That told me I had arrived in this business, because Joe would never have hired anyone he thought wasn’t qualified to replace him.

Have to agree with you. Joe Tait was the best basketball play-by-play guy ever on radio.

Played some of his clips for my broadcast classes so they could hear the best.

Yes, he was indeed a great broadcaster, had an influence on me when I was doing basketball play-by-play eons ago. Can still hear him with his voice resonating: “Joe Tait with the Cavaliers on Three-W-E!” Bobby “Bingo” Smith takes (and makes) a jump shot…”Bobby from 15″….. You can fill in the blank of how he called the basket. I heard about his passing on the CBS Radio Network news on the hour so he did transcend local radio. RIP.