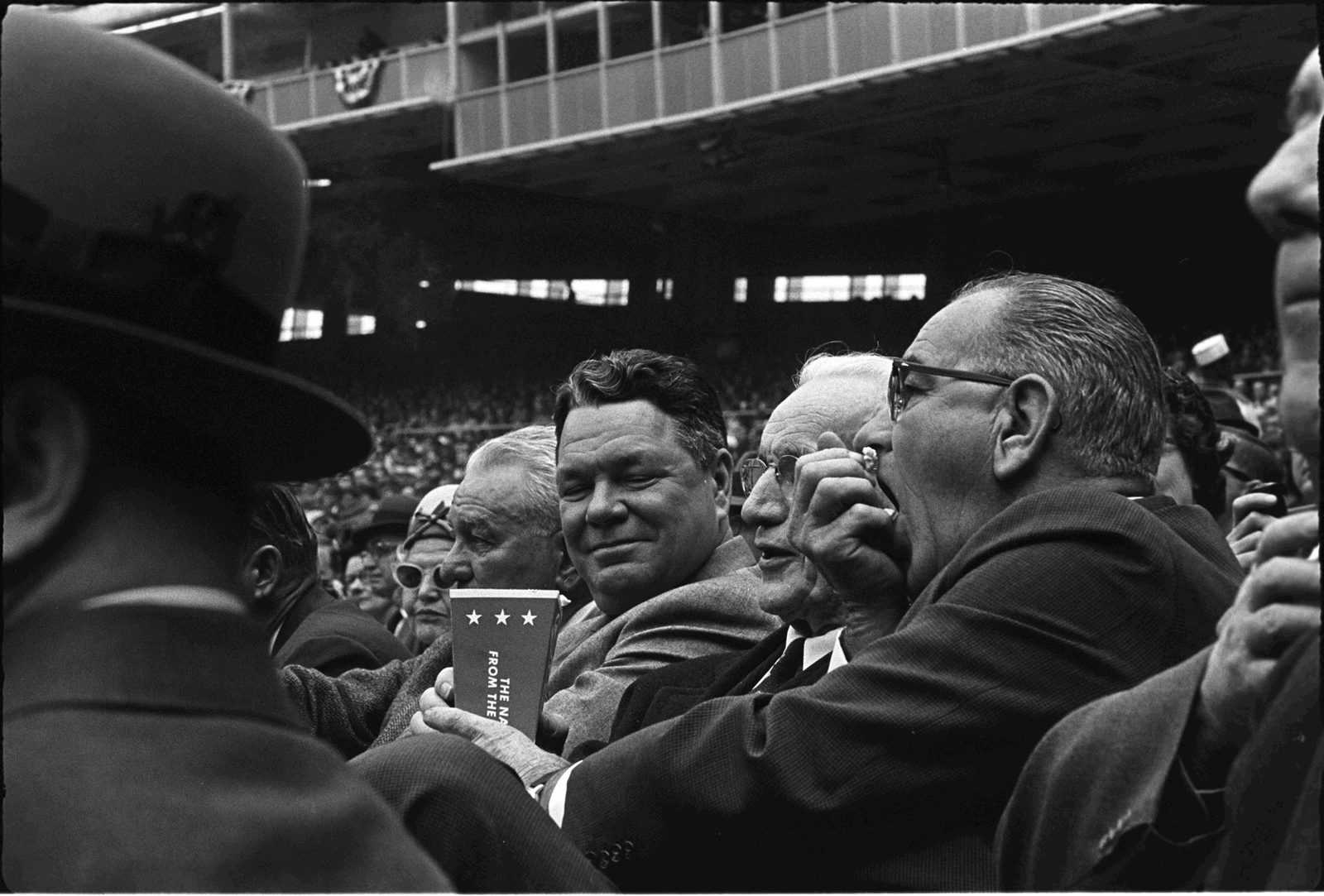 President Johnson attending opening game of the 1964 baseball season in Washington, his first as Commander-in-Chief

LYNDON JOHNSON: POLITICS WAS HIS ONLY GAME

Born in the Hill Country of Texas, Lyndon Johnson soon heard train whistles in the night. They stirred “child’s dreams,” protégé and Texas governor John Connally would say in a poignant eulogy, “[that] could be as wide as the sky and [make] his future as green as winter oats because this, after all, was America.” An assassin’s bullet began Johnson’s presidency on November 22, 1963. The war in Vietnam ended it. Memory should not dim aid to the poor, Medicare for the aged, the Voting Rights Act—all that he achieved.

LBJ likened himself to baseball’s colossus. “They booed Ted Williams too, remember?” he said. “They’ll say about me I knocked the ball over the fence—but they don’t like the way he stands at the plate.” Such an allusion was rare for Johnson, who seldom had time for sports. He and Connally attended football games at the University of Texas, where “he wouldn’t even watch [the game],” said his closest aide. “He’d wave all over, at everything but the field.” Once Johnson did try to help Longhorn football coach Darrell Royal recruit halfback Joe Washington, who opted for Oklahoma.

To compound insult, a 1968 Lou Harris poll noted that for the first time “football [had] passed baseball as the favorite sport,” 23 to 19 percent. “The problem is that baseball has become too dull.” That year Carl Yastrzemski’s relatively paltry .301 average won the AL batting title. Don Drysdale threw a record 58 2/3 straight scoreless innings. Pas possible—even soccer seemed exciting. Baseball then lowered the mound and reduced the strike zone from 15 to 10 inches to restore offense as constitutionally allowed.

The perceived view of LBJ treating baseball as take-it-or-leave-it was correct. Yet—we forget—the sport had seemed almost as robust in his early presidency as when JFK preceded him. Baseball’s regular-season network audience routed rival fare. The World Series and All-Star Game were TV’s No. 1 and 2-ranked sports events, Johnson the last president under whom each game was daytime, a gift youth today cannot grasp. Students smuggled the Classic by radio into class. Hearing faint play-by-play, even teachers craved the score.

The plunge then began. The Yankees and NBC fired their grand stylist, Mel Allen. The Bombers axed Red Barber, tired of hearing of Thoreau. Baseball brooked the collapse of its 24-karat franchise, the 1966 Yanks thudding last. Dizzy Dean was canned as heart of the CBS Game of the Week. Every numerical index shows the effect. Just one: In a 1964 Gallup Poll, 48 percent of America called baseball their favorite sport. Nine percent do now.

Ironically, LBJ’s closest political friend for much of his earlier time in Washington had paid microscopic attention to the game—Richard Russell, a powerful member of the 1933-71 U.S. Senate. Asked what drew Johnson and him together, Russell said, “We both liked baseball. Right after Lyndon came to the Senate … we started going to the night baseball games together.” LBJ’s abrupt interest in baseball stunned those who had known him earlier. Likely he adopted it to spur his rise in power.

On April 9, 1965, Johnson arrived for the Astrodome’s unofficial first event: an exhibition with the Yankees. Mickey Mantle smashed the Dome’s first homer. Later, Nellie Fox singled to give Houston a 2–1 win and, with The Mick, capped a night of Golden Oldies. Earlier, the scoreboard flashing a profile of the president, beamed in lights a message glowing, Welcome, Mr. President. The crowd roared, play briefly stopped, and players peered toward the box. It was the peak of his baseball career.

For Johnson, life itself closed on January 1973, as the Vietnam War ended and U.S. prisoners of war finally knew they were secure. At a simple ceremony in Texas, Connally said goodbye to his friend. “He first saw light here. He last felt life here. May he now find peace here.”

NEXT: RICHARD NIXON: THE ULTIMATE FAN