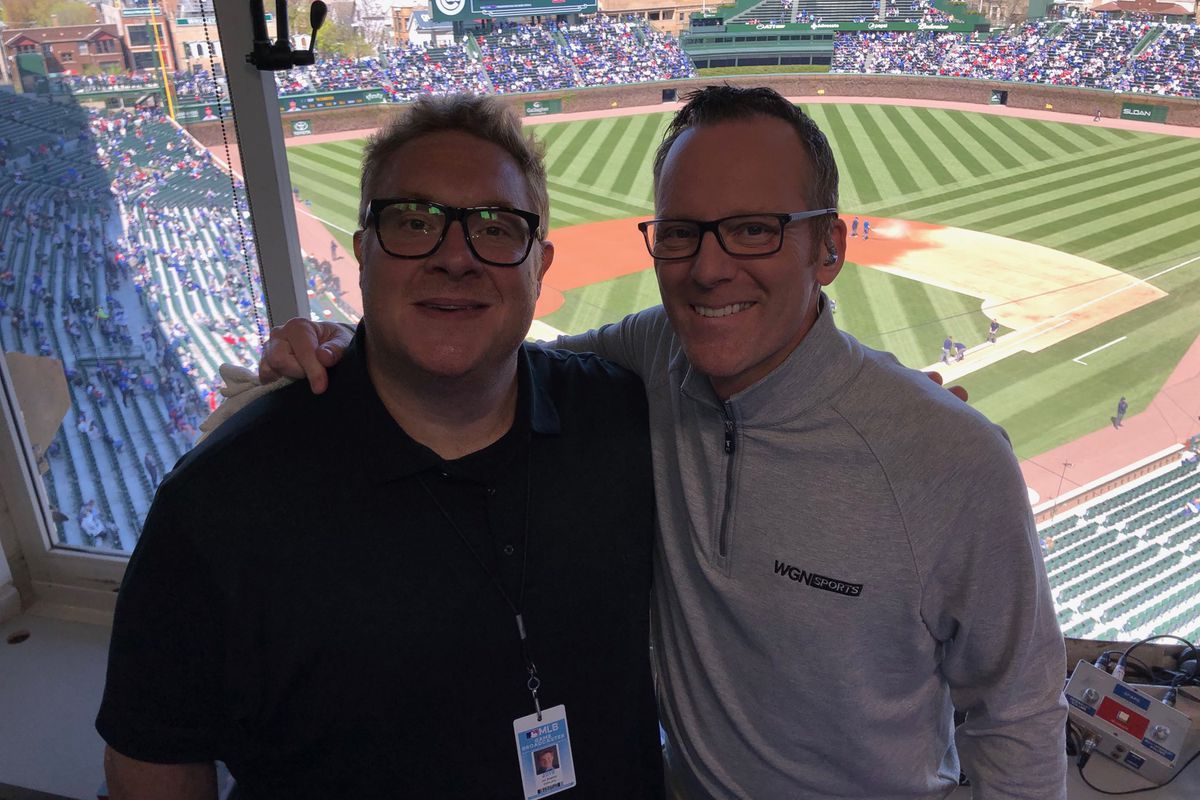 Boog Sciambi (l) is the new TV voice of the Chicago Cubs. He succeeded Len Kasper (r) who moved to radio, covering the White Sox.

John ‘Boog’ Sciambi, 51, has a new home. It’s Wrigley Field. Sciambi, the longtime voice of ESPN’s Sunday Night Baseball on ESPN Radio and play-by-play man for ESPN’s Wednesday night telecasts is the new TV voice of the Cubs. He succeeded Len Kasper at the start of the season.

The Cubies enjoy enormous popularity in Carl Sandberg’s City of Broad Shoulders. Historically, the two most beloved announcers the team has ever had, Jack Brickhouse and Harry Caray, were unabashed rooters in their years calling the club’s games.

Kasper presided over Cubs’ telecasts for the past 16 years. But at the end of last season, the native Michigander might have felt more love coming from Chicago’s South Side when Marquee Sports Network took over the reins of Cubs’ telecasts. Interestingly, Kasper developed quite a following, calling Cubs games using a somewhat subdued but rhythmic style, particularly when juxtaposed to the animated Brickhouse (1941-45, 1947-81) and Caray (1982-97).

But the winds of change frequently blow through broadcast booths. So Kasper took his timbre to White Sox radio where he has already served as the soundtrack of a no-hitter hurled by Carlos Rodón.

For longtime fans, adjusting from one voice to the next takes some time. At the outset, there are usually doubters and comparisons, particularly when it comes to baseball where accepted local announcers evolve into voices of summer.

“After Len elected to take that job, I didn’t think much of it. My gig at ESPN was great,” Sciambi said. “They reached out to me, and the more that I talked with the Cubs and the Marquee Sports Network and with each step forward, it just felt more and more right.”

Sciambi inherits a much different franchise from the one he covered in Atlanta. He was there at the end of Bobby Cox’ managerial reign and during an era where the Braves were titans of the National League—winning five pennants. Now Sciambi is broadcasting for a team that might lack direction on the expiring contracts of their three best players, Kris Bryant, Javier Baez and Antony Rizzo. Whether ownership will re-sign the trio or start to rebuild is uncertain.

Still, Sciambi is grateful and thrilled to call games in Chicago, a city that cherishes baseball.

“There is no question that this is one of the most special baseball cities out there… it rivals Boston, New York and San Francisco,” Boog said. “What is cool is that I have a great passion for the sport, and my passion for baseball mirrors the fans’ passion in Chicago. It’s truly a signature job.”

While some fans may miss Kasper on Cubs’ broadcasts, Sciambi was initially surprised about the opening but is now excited to bring his style to Cubs baseball.

Though Sciambi has taken over Casper’s duties, he will continue to work as a multiplatform broadcaster at ESPN. Sciambi noted that the Cubs remain his main priority, but he estimates working close to 30 baseball games with ESPN this season. 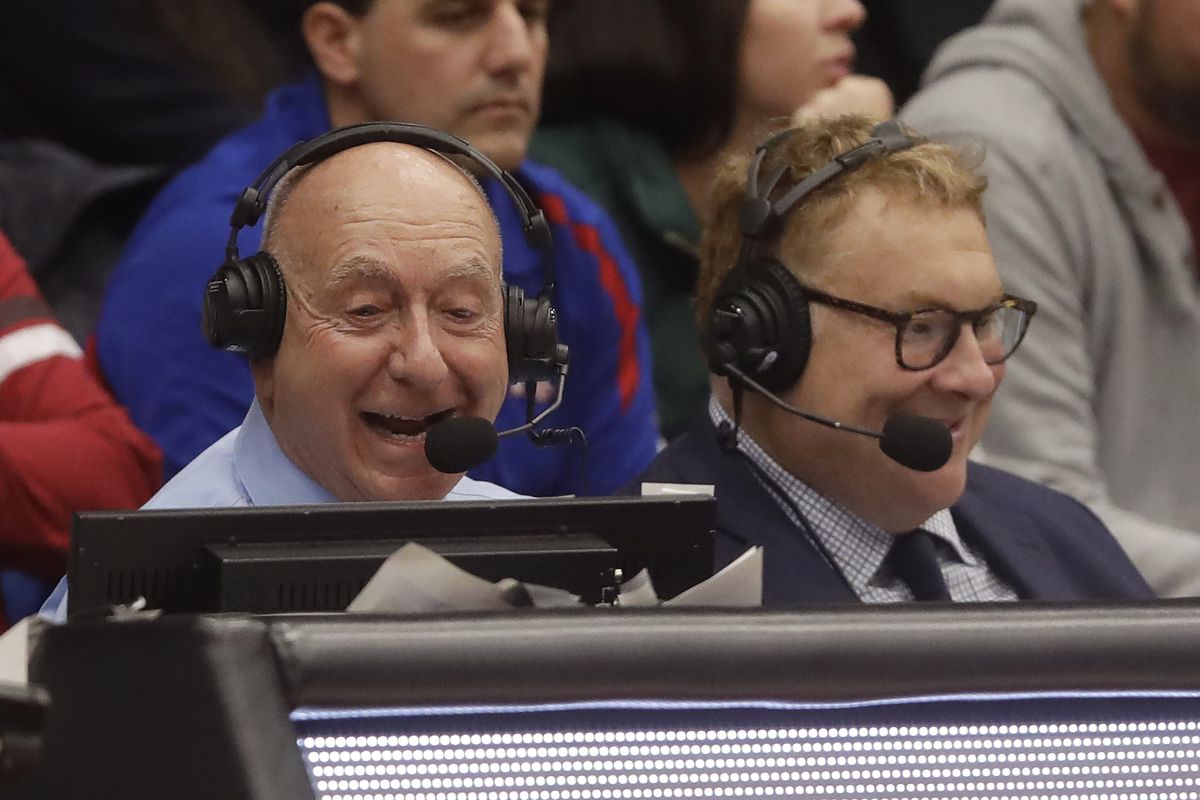 “I will probably call close to 20 Sunday night games on the radio along with the All-Star Game and playoffs on ESPN,” Sciambi said. “On top of that, I will call 30 college basketball games on television.” (Sciambi, working hoops with Dick Vitale, left)

How about replacing a comfortable voice in Kasper? “I try to stay disconnected from that part of that. In baseball, people get connected to the announcers and a lot were connected to Len. Some people won’t be happy about the change, and I get it but there’s not a lot that I can do, I just have to do me.”

An aspect that Sciambi will have to change coming from a network is the individual focus on a team. When working on ESPN, Sciambi could expand his focus on the league as a whole, discussing the league’s biggest storylines. Now, the focus narrows to storylines that intrigue the Cubs’ fanbase. Sciambi admits that one adjustment will be prioritizing the interest of Cubs fans.

“One of the things that you have to remember perpetually is that the broadcast is through the lens of the team, whereas when I’m doing a game nationally, I’m constantly looking for the most interesting headlines throughout the league,” Sciambi said. “Now I have to think about what is more interesting for Cubs fans. Bottom line, Cubs fans care enough about baseball that there will always be meat on the bone in terms of content.”

He adds, “The biggest thing now is that the broadcasts are primarily focused on the Cubs. For example, if the Cubs are playing the Angels and Anthony Rendon is killing it, you can talk about him but the focus still has to be from the perspective of the Cubs.”

Sciambi says the biggest challenge is the daunting task of calling games remotely during the COVID-19 pandemic. Especially in baseball, with so many “bang-bang” plays, an announcer needs to see the action in person to tell a story.

“I hate broadcasting remotely—it struggles to provide the necessary service to the audience,” Sciambi said. “Our job is connecting with the audience, and we have a chance to humanize the people who are involved, and that aspect gets affected when calling games remotely.”

Nicknamed Boog for the former Orioles bulky first basemen, Boog Powell, Sciambi elaborates on the difficulty of calling games away from the playing venue.

“Calling the game remotely is much harder than people realize, we aren’t capable of doing things as well. You can’t see the little things like the umpire, and you don’t know what the call is. So like the audience you’re guessing. Stuff like that makes it especially hard to broadcast. ”

Sciambi adds, “There are communication issues, but our job is connecting audiences with the people involved. For example, if I’m doing a Kansas basketball game for ESPN, and I’m with Bill Self, it’s about connecting him with the fanbase and doing that remotely is not as effective.”

For now, Wrigley will allow about 8,000 fans a game, about 20% of the venerable stadium’s capacity. But only time will tell how long teams, stations and networks will have their voices stay home for road games.

Thanks to Will for a fine story.

Any team that switches to a TV-radio simulcast or does not allow announcers to travel when the pandemic is behind us is telling us that the fans do not matter. Period.