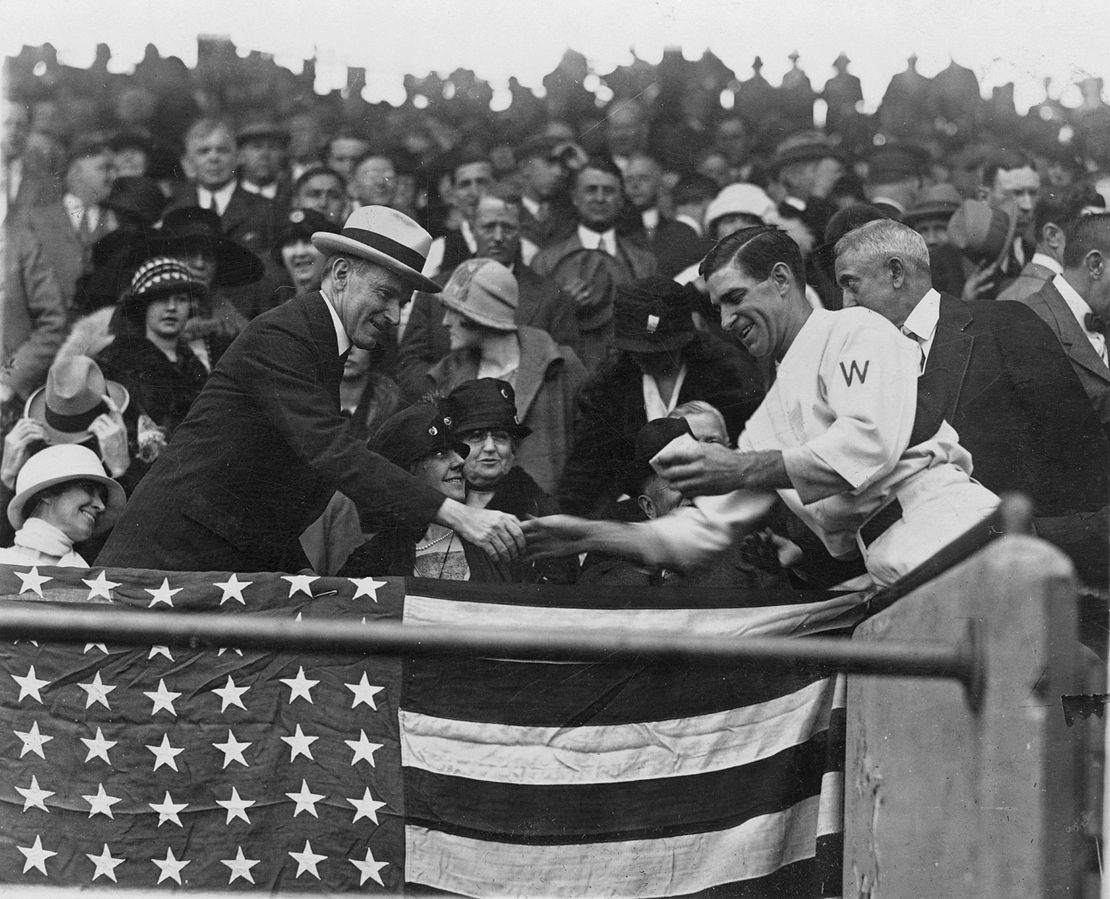 American Presidents, like great French restaurants,” said the writer and educator S. Douglass Cater, “have an ambiance all their own.” This is especially true of U.S. presidents’ attitude toward sports. Today continues a multi-part series by noted writer Curt Smith, who wrote more speeches than anyone else for former President George H.W. Bush and has authored 17 books. Some of the below appeared in original form in his widely praised The Presidents and the Pastime: The History of Baseball and the White House. (University of Nebraska Press, 2018, $29.95). This summer the GateHouse Media columnist and Senior Lecturer of English at the University of Rochester, will etch presidents from Washington to Trump—how they assessed Sports USA, and it appraised them. Historian Allan Nevins referenced “an America now so far lost in time and change that it is hard to believe it ever existed. But it did exist, and some memory of it … ought to be cherished by the Nation.” This series tries.

A glimpse of Calvin Coolidge does not suggest Charles Atlas by way of Arnold Schwarzenegger. Washington Senators owner Calvin Griffith described America’s 1923-29 president as “a calculating, unexcitable man who showed nothing.” The non-sportsman at least had a politician’s sense of grasping what the public wanted. In a picture, photographers stand on a dugout at Griffith Stadium as Cal primps to throw. He looks clueless, but willing to be clued.

In a talkers’ profession, Coolidge could be legendarily terse—hence “Silent Cal.” A woman at a White House dinner once gushed, “You must talk to me, Mr. Coolidge. I made a bet today that I could get you to say more than two words.” Cal: “You lose.”

Reticence was one thing, frigidity another. How to humanize, given a man whose body temperature seemed measured in single digit. Sports came to mind, except that before fall 1924 Cal’s nearest brush had been tragedy. In June, Calvin Jr., 16, spent an afternoon playing tennis at the White House and developed a blister on his toe. The blister, infected, led to severe blood poisoning. Cal Jr. died next week.

That left a family to mourn—and 1924 election to run, letters from worried GOP donors filling the White House as Election Day neared. Out of nowhere, a stratagem surfaced from a surrealistic source. One day, wrote Baseball Magazine, White House adviser Frank Stearns read a telegram: induce president to tender reception and banner to Washington team our american princes feel it highly deserved and furthermore would be one of finest political strokes in history.

The telegram clicked. Stearns showed it to colleagues, who gave a thumbs up: tether Coolidge to baseball, then in full bloom of popularity. Problem: Concerning charisma, the man born on July 4—in his case, 1872—was hardly a star-spangled kid. Answer: Attach to Cal a fine Senators team that had never won a pennant. It took first place in June, clinched the pennant September 29, and returned from Boston to Union Station by train October 1, hazing seized the nation’s fancy.

Until now baseball had been as foreign to a certain tightwad in the Oval Office as a misspent dime. Officially his campaign slogan was “Keep Cool with Coolidge.” By election day it could have been “Coolidge: A Baseball Life.” The brainchild turned real as a motorcade trekked to the White House. Thousands cheered, each player riding in a new convertible. Passengers then traipsed to the Ellipse, where Lincoln played town ball in the 1860s.

Baseball makeover complete, Coolidge peered down from the platform and gave a tub-thumping talk—the kind of speech he had rarely given and almost never gave again. “They are a great band, these armored knights of the bat and ball,” Cal began. “They are held up to a high standard of honor on the field, which they have seldom betrayed.” Coolidge vowed to attend the Series, said the Sens would beat John McGraw’s National League Giants, and told Congress to adjourn so members could attend. Thankfully no one asked him to define a Baltimore chop.

To reporters this was a new Coolidge: language-savvy and baseball-cool. Few knew that the real baseball Coolidge was wife Grace, having followed the game since youth, gone to games at Griffith Stadium on her own, and kept a perfect scorecard. Spotting it, Clark Griffith was amazed. “Where did you learn that?” the owner said. “At college”—University of Vermont—“I was the official scorer for our baseball team,” Grace said, as much a baseball fanatic as Mr. President was not.

The Series stirred, Washington taking its (thus far) only title.  Game Seven at home was a 4-3 12-inning classic. Students and working men and bureaucrats mobbed the Senators. In the melee, Johnson found Coolidge, who shook his hand. Cal kept cool: “Nice work. I am glad you won.” The White House was too. Few campaigns have so shrewdly tied politics to culture, Coolidge winning in a romp.

Next year the Senators waved another flag but lost the Series, Cal less gripped by baseball than when he needed a new lease on office. He had become president in August 1923, in Plymouth Notch, Vermont, visiting his family home that lacked electricity and telephone. The then-vice president took the oath of office after learning from a messenger that President Harding was dead.