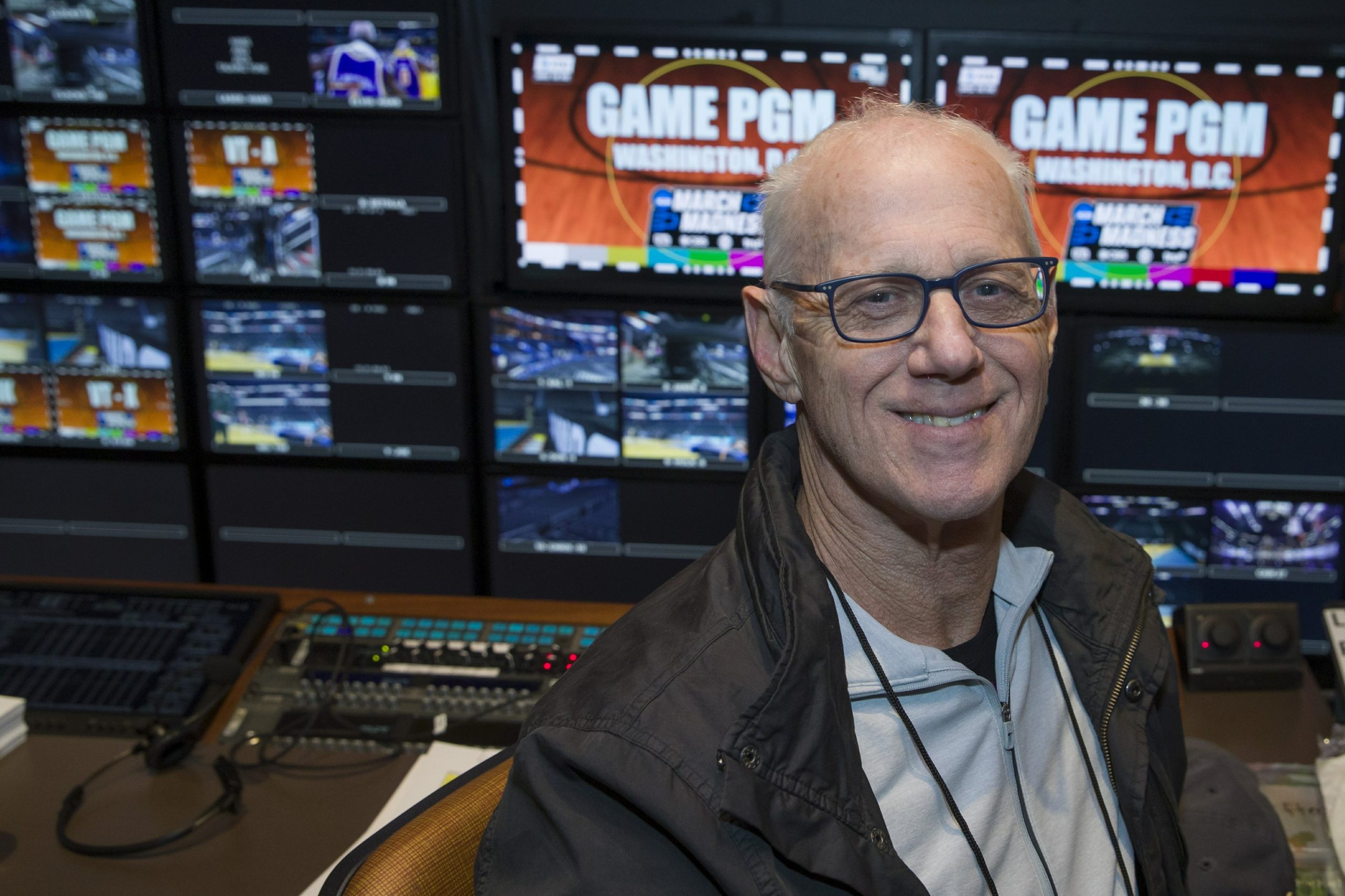 In 1959 when Bob Fishman was ten years old living in the Virgin Islands, it wasn’t easy being a Dodgers fan. The move by the Dodgers to Southern California left Fishman scrambling to find a station via Armed Forces Radio, which carried the Dodgers.

Fishman, now 71, talked about this last Tuesday night when he was inducted into the Sports Broadcasting Hall of Fame. It was an honor long overdue for one of the most beloved directors in the business.

Sometimes Fishman could get the Dodgers via the NBC Game of the Week in Puerto Rico, dubbed in Spanish. “But for me,” Fishman told the audience, “it was radio, and the man who made it all come to life, Vin Scully.”

It was a dream come true twenty years later when, for two seasons, Bob Fishman directed Vin Scully’s NFL games on CBS. After one Sunday game Scully asked Fishman if he wouldn’t mind doing him a favor. He asked Fishman to take his big blue Dodgers suitcase to Atlanta for him while Vin flew to do a Dodgers/Expos playoff game the next day.

“That’s when my loving wife Margaret suggested—jokingly I think—that this was my chance to open his suitcase and sleep in Vin Scully’s pajamas.” The crowd roared with laughter. “For the record,” Fishman said with a grin, “I didn’t.”

Bob Fishman grew up wanting to be a play-by-play announcer, a la Vin Scully, but when he got to Boston University it became clear to him, “that I was never going to be good enough behind the microphone.”

Instead, his interests turned toward directing. His first job was in 1970 as a stage manager at the CBS owned station in Philadelphia, WCAU. There, on Saturday mornings, one of Bob’s tasks was to drop confetti on the head of children’s show host Gene London.

Three months later he had graduated to New York as commercial coordinator. “It was the only opening they had,” he said. As fate would have it, Fishman was assigned to coordinate the commercials during space shots. Bob Wussler, the CBS wonder-boy, who later became president of the network at age 40, ran the special events unit then at CBS News. It was Fishman’s job to notify Wussler when they had to insert a commercial.

Bob Wussler Was His First Mentor

“I’d follow him (Wussler) around the studio,” Fishman said, “and I kept reminding him that we were three Tang commercials behind schedule. He’d say something to me like, ‘Can’t you see they’re walking on the moon.’” Fortunately there was enough downtime for Wussler to get to know Fishman. “We talked a lot of baseball. I was a Dodgers fan and Wussler loved the Giants.”

In 1972, Wussler chose Fishman as his production assistant and Fish had a ringside seat for CBS’ coverage of space shots, political campaigns and election nights. When his directing mentor, Joel Banow, took ill the night before the launch of Apollo 17, Fishman was thrust into the director’s chair for the first time at the tender age of 24, directing segments for CBS Morning News.

“I overcame my panic,” Fishman said, “the first time I cued Walter Cronkite, and realized, ‘Hey, I can do this!’”

From there, Fishman soared at CBS until he hit a speed bump in 1990—non-Hodgins lymphoma, a form of cancer, that luckily in Fishman’s case was treatable . After experiencing chest pains on a remote, a large mass was discovered in his chest. Chemo worked at first, shrinking the mass to a pimple but then it began to get larger and his doctor said Bob would need a bone marrow transplant. Fortunately he was able to transplant his own cells to survive. “First they give you enough chemo to kill an elephant,” Fishman revealed, “Then they rescue your system with the bone marrow.” Six weeks of isolation followed while his white count rose back up. When he was ready to return to work, every assignment he previously had at CBS Sports was waiting for him, thanks to executive producer Ted Shaker.

After recovering, Fishman realized how lucky he was to have his wife Margaret and family there for support during his recovery. He knew there were others getting similar treatments who couldn’t afford to have their families there or couldn’t even pay for the insurance. So he and Christina Merrill, whom he met during his recovery, started the Bone Marrow and Cancer Foundation. Last year, it distributed over $2 million to families in need.

You don’t get voted into the Sports Broadcasting Hall of Fame just for being at your job a long time. Along the way, Fishman has directed some remarkable events; 37 NCAA Final Fours, 27 U.S. Tennis Opens and twenty years of the Daytona 500. This included some history, the first ever live broadcast of the race and the first-ever Racecam which gave viewers the thrill of being in the car.

His entire career has been with CBS, which means he’s worked with some of the all-time greats over the years. He credited learning his craft of directing from those that came before him at the network like Sandy Grossman, Frank Chirkinian and Tony Verna. At the ceremony, Fishman thanked NBC’s Ted Nathanson and Harry Coyle for their help as well. Of the great broadcasters  who are no longer with us, Fishman worked with Pat Summerall, Lindsey Nelson, Jack Whitaker and Dick Enberg.

The one thing that distinguishes Bob Fishman’s work is his unyielding attention to the game. No splashy graphics are there to clutter the picture. He doesn’t take the camera off the basketball court at the end of a tight game to show someone in the crowd watching what we at home are trying to see.

Fishman never leaves the play. When tough New York Post TV critic Phil Mushnick was watching a showboat dunk in a recent NCAA game, he was surprised when the director showed a shot of the passer who set up the play, instead of the man who dunked the ball. “Must be a Fishman game,” Mushnick muttered to himself. Phil went on to pay Bob high tribute when he wrote, “Fishman’s work reminds us that common sense has grown uncommon.”

The other thing that makes Fishman a natural for this award is that he is absolutely adored by the men and women who have worked with him over the years.

Here’s a quick look at some of the comments of those with whom he’s worked: “His voice oozes with trust, respect and leadership. The excitement and humor Bob interjects is contagious,” said one.

Another member of his team wrote: “In a world full of egos no one deserved to display his more (than you, Bob), but you never did.”

There wasn’t a more popular selection in the 2019 Hall of Fame Class than Bob Fishman, nor a more deserving one. But maybe the greatest tribute of all came from the man he’s admired most for at least sixty years. Before Fishman walked to the podium, there was a short video that featured a familiar voice.

The audience let out an audible gasp when the opening chyron read: “Narrated by Vin Scully.”

What a wonderful profile! Thanks to Rich Podolsky for doing it. I remember seeing Fishman’s name in The NFL Today’s credits when I was a kid, starting to watch football because my idol, Vin Scully, was now doing games for CBS. If I’m correct, Fishman started directing Scully’s games when he worked with Stram in 1981, when Vin closed out his NFL career by calling “The Catch” by Dwight Clark. Fishman also directed horse racing for CBS, and I remember watching and noticing that he didn’t change cameras during the race. I read later that he felt that way, you… Read more »

Great observation Michael about Fishman’s skill directing horse racing I should have also mentioned in the profile that he directed many Belmont Stakes, including Seattle Slew’s and also Affirmed’s thrilling victory over Alydar. When you watch Fox’s coverage of a race today they always switch the camera on the backstretch to give the viewer a head-on look, which serves only to confuse us all and makes you wish Bob Fishman was directing.

Thanks. I think those kinds of angles are great on a replay, but not during the race. To agree with you and Fishman, I’m in tall cotton!

I was VERY fortunate to be raised and schooled in network TV by Bob Fishman and Bob Stenner at CBS. Absent their guidance, encouragement and empowerment, my tenure in this business would have been brief.
Fish has always been wise beyond his years, I’m surprised to learn he’s only 71. A great friend and colleague receives an honor that is richly deserved. Nice profile.