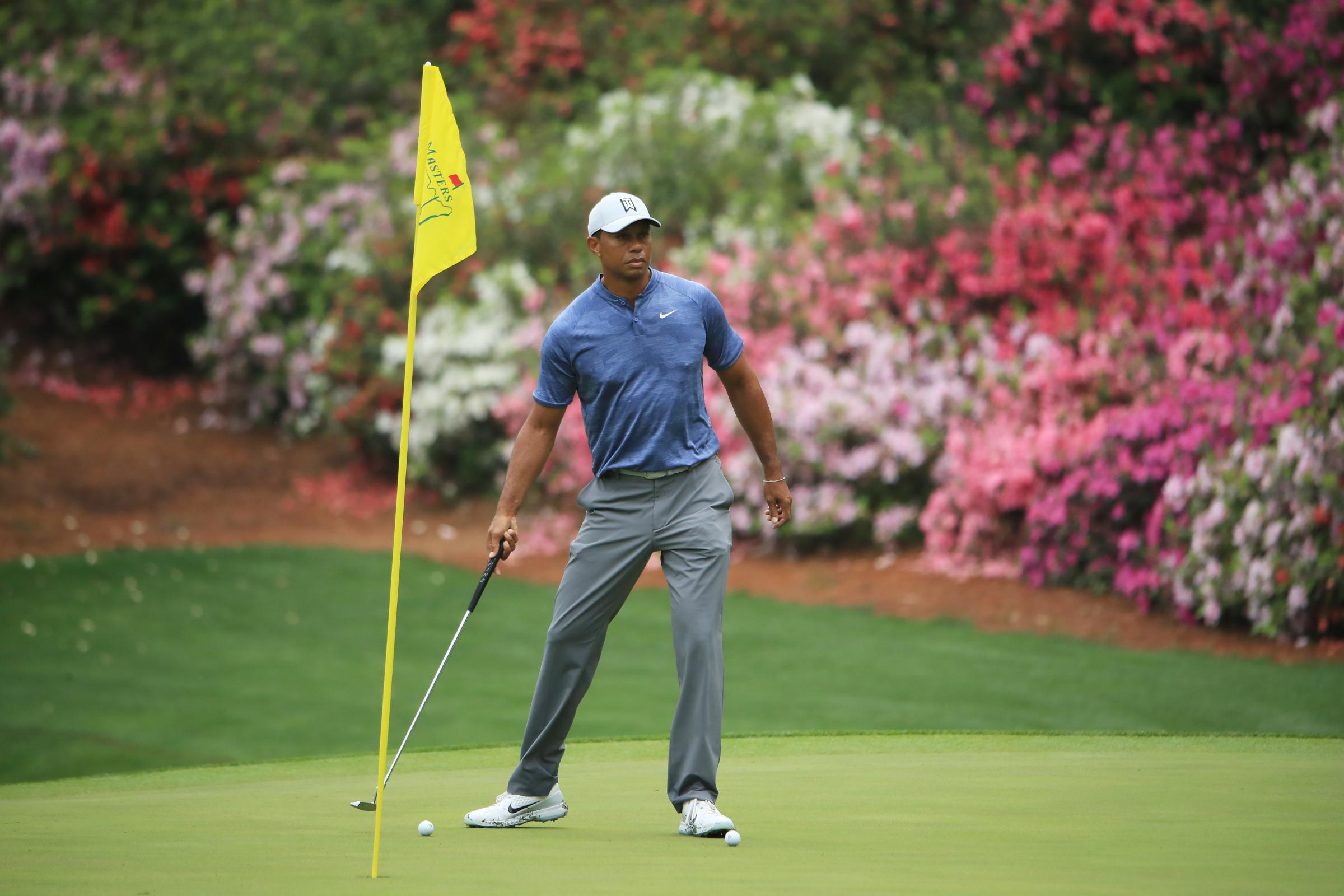 Tiger Woods at the Masters which he's won four times

The CBS broadcasters, working coverage of the Masters Thursday on ESPN, must’ve used the word patrons dozens of times to describe the fans lining Augusta National. In sports terminology, the word patrons is almost extinct. At no other CBS golf event would Jim Nantz and company use that word. Only at Augusta.

And every time I heard it Thursday I thought of poor Jack Whitaker. Now 94, Whitaker was just 41 and a young star at CBS back in 1966.  It was the year that Jack Nicklaus won his third green jacket in a Monday 18-hole playoff over Gary Brewer and Tommy Jacobs and Whitaker was anchoring CBS’ coverage.

The broadcast was running late and as Nicklaus moved toward the 18th green, the crowd broke ranks and rushed through the fairway to get position for Nicklaus’ final putt. Whitaker, who is as classy as they come, said on-air at that moment that it looked like a “mob scene,” was rushing the green. The description didn’t sit well with then Augusta president Clifford Roberts.

But when Whitaker rushed the close of the broadcast so he could pass the baton to CBS News anchor Walter Cronkite, he forgot to mention the green jacket ceremony during his wrap-up. CBS News was king at the network in those days, and nobody had more power or respect than Cronkite. When asked about it last year for this website, Whitaker said, “You don’t mess with Cronkite.”

As a result, Roberts told CBS that it had to remove Whitaker from the broadcast of the Masters. “We don’t have mobs at Augusta,” Roberts said. The ban lasted six years before Jack was allowed to return to the telecast in 1972. Sidelining Whitaker drew outrage from sportswriters all over the country. But CBS felt that it had no choice. CBS’ Masters deal was always on a year-to-year renewal. No long-term deal ever. If it didn’t do as Roberts ordered, Roone Arledge and ABC were waiting in the wings.

So when you hear Nantz and crew calling the crowd patrons, as weird as it might sound to you, at least you now know the reason why.

Tiger Woods is one of ten players who finished round one at two under par, with another ten golfers ahead of them on the leader board. And among those are terrific names like Mickelson, Johnson, Koepka, DeChambeau and Rahm.  But each time ESPN started its highlights show, both after the day’s round and on SportsCenter, it acted like Woods was alone in the lead, spending more time on him than the others combined. I understand he’s won four green jackets and that fans at home are more likely to tune in if he’s in contention, but let’s not go crazy.

With earlier split-tee start tomorrow due to threatening weather late in the day, the Masters can end by about 2pm eastern.

RATINGS WILL SLIP, whether Tiger is in contention or not because fewer people watch early. Tee-time is 7:30am, 4:30am in the pacific time zone. CBS will begin its coverage at 9am eastern. It does toy with the Sunday morning news shows.

There are few options for either the Masters or CBS.

But only two minutes of ads run each hour so the financial dynamic won’t be badly thrown off kilter. The optics to the media community though will need an asterisk! Augusta doesn’t try to milk the Masters for all its worth, and sponsors know the set up going in. Mercedes, IBM and AT&T will have to accept the rating results as a consequence of one of the vagaries of engaging with the Masters.

Of course, now we know it worked out pretty well for Tiger, and thus for CBS, but I confess to enjoying that Augusta National dictates the rules and not CBS. We who dwell in the Pacific time zone suffered for it, but we’ve also spent a lot of years with networks having MLB games start in the late afternoon, which is often a terrible time, so the East can have prime time. As I recall, Gary McCord said Jack Whitaker good-naturedly chewed him out when he got banned, because until then Whitaker had been the only one. And I recall… Read more »