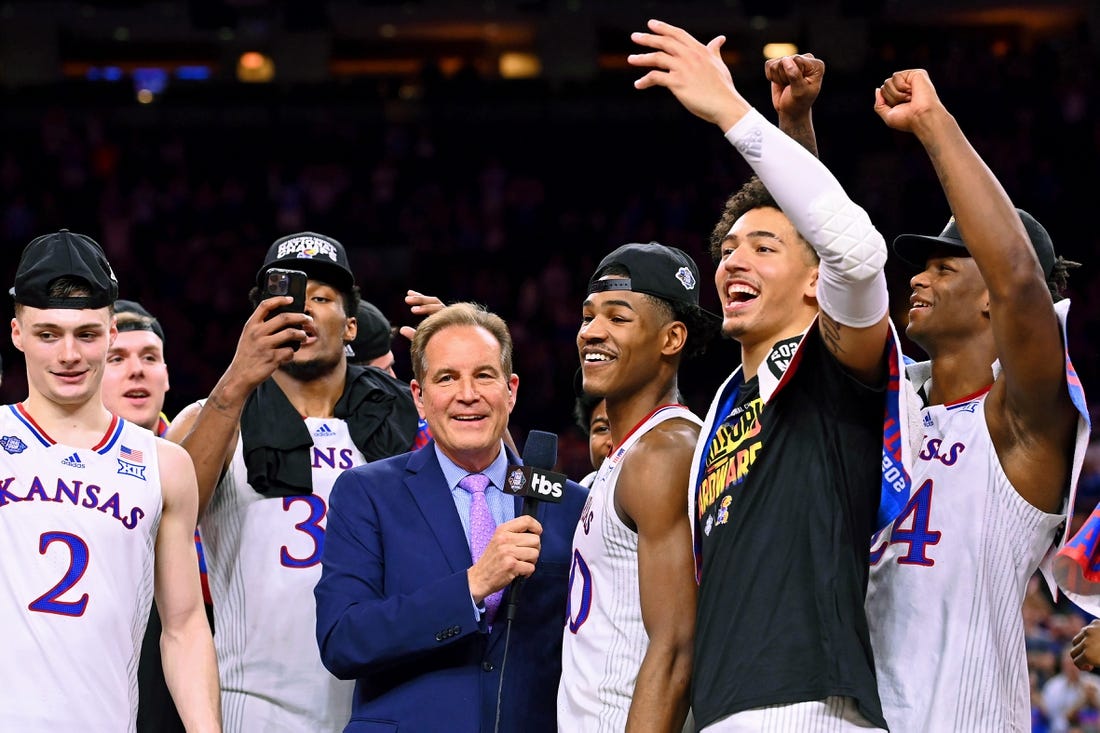 Did CBS have its fingerprints on its top sports guy? Is there an insurrection? Nantz is still young, 63?

Doesn’t Jimmy love the NCAA as much as any event he covers? His successor, that’s successor, not replacement, Ian Eagle is fine but pales his predecessor in talent. Eagle turns 54 in February.

Nantz sounds so much more pleasant and less screechy than Ian. Despite crowded by two men at the table, not one, he figures out how to speak in measured intervals and leisurely so. 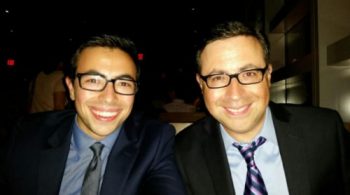 Jim, who’ll continue with the NFL and Golf, thankfully, spins yarns as well as anyone on network TV, today. Ask yourself what makes the Final Four so attractive. It’s human interest angles. Weaving in stories about unknown players is something Nantz does as well as Michael Jordan did with a ball using his supple wrists. With Jim it’s his master lip.(Noah – left – son of Ian – both successful voices)

Eagle knows the game, yes, and it shows. But from a perspective of a vocal range, Ian’s call takes a palpable drop in sound quality. Can Ian compare with Verne Lundquist or Dick Enberg, former CBSers? No! When I turned the tube on Sunday for the Jets-Broncos, I heard a quick shriek and shrill and knew it would be an unsettling viewing experience.

Where’s Kevin Harlan in this mix? He’s strong, assertive, warm and convincing? One of the issues at hand is that a network bias should be considered. The Sports CEO Sean McManus is a New Yorker. He’s effective as an executive, brining back the NFL to the network after it lost the rights.

During the interregnum between rights, the great Mel Karmazin, figured out a way to get the rights back.

McManus’ dad was the great Jim McKay, anchor of Wide World of Sports. The president of CBS Sports, David Berson, apparently doesn’t seek the limelight. He quietly goes about his business and makes lots of decisions behind the scene.

From what I can make of it, after much convincing, Jim Nantz acquiesced to relinquish his lead basketball role. His last game will be the title series in Houston next April. He will throttle his hoops chords close to where he attended college, the University of Houston. Nantz once told me that while when he was still a student at UH and a fan of the Cougars, Coach Guy Lewis asked him to do the Public Address. In other words, kick off his broadcast start. He started basketball in Houston and will end it there too.

Nantz has a brilliant memory. His instant recall serves him and viewers effectively. From that perspective, he reminds me of Vin Scully, Al Michaels and Bob Costas. I wouldn’t put Ian in that group. Not close. Mr. Excitement? Maybe?

For some thirty years, Nantz thrived doing basketball. It started with a character as a partner, Billy Packer, who knew the game and was a confident risk-taker and businessperson. Jim loved hopping from the NFL to the tourney to his first love, the Masters. CBS Sports’ head at the time, Neal Pilson, canned Brent on the eve of the tourney in 1990. For the last 30+ years, Jim ruled the roost. He’s always been warm and fuzzy. Nantz broke in Tony Romo and brilliantly too, in the summer before their debut in the fall of 2017.

Few if anyone will argue. Vin Scully was the best MLB play-by-player ever. He had every ingredient required. While Vin did his thing, other voices would sit and take notes. We’d share many of his great phrases, a long list. Al Michaels, living in Southern California, identified Vin as a role model.

“It’s his time,” Jim Nantz told the New York Post’s Andrew Marchand: “I will support him 1,000 percent. He doesn’t need my support. But I’m absolutely thrilled for him. He’s a great teammate. He’s been right in the middle of this NCAA Tournament for a long, long time. So he’s not dropping in from outside, I mean he’s going to be working an extra weekend. It happens to be the big one. And he is definitely capable and ready and will excel and he’ll take it to all new heights.”

I can’t imagine that Jim is happy about this decision. He likely fought it for a while. The rite of spring of Nantz on championship NFL games, the NCAA Tournament and the Masters. There’s no trio of events any greener.

Why wasn’t Kevin Harlan chosen for the CBS college hoops? He has a better voice than Eagle and I think he’s liked more in the Midwest and perhaps the west too. I don’t even know why Harlan is a step below Eagle on the NFL depth chart but that’s another story. Who knows what shenanigans the representative agents engage in?

From Jim’s quote yesterday, “It was his time (Ian’s)”, it sounded like code words. Nantz might have been saying, ‘Guys, I tried. It is what it is, and I’ll figure it out.’ The NFL and Golf, sound great!

I’ll miss Jim’s constant greeting of Friends, but I for one, won’t always welcome Ian’s contriving quips. It doesn’t give the viewer that warm hug. Ian will get back a former partner in Bill Raftery, back with him and Grant Hill.

Eagle can sound sarcastic as a play-by-play caller and a funny one too. Losing a gem like Nantz during the 2023-24 season will be a tough. He represents Americana. Jim endured pushback but generally lost to the whimpers of corporate executives.

“Daddy needs to be home,” Jim said. His kids are of school age. Jim had a daughter with his first wife, Lorrie, and two with his second spouse, Courtney, a girl followed by a boy.

It would be nice, but I doubt it.