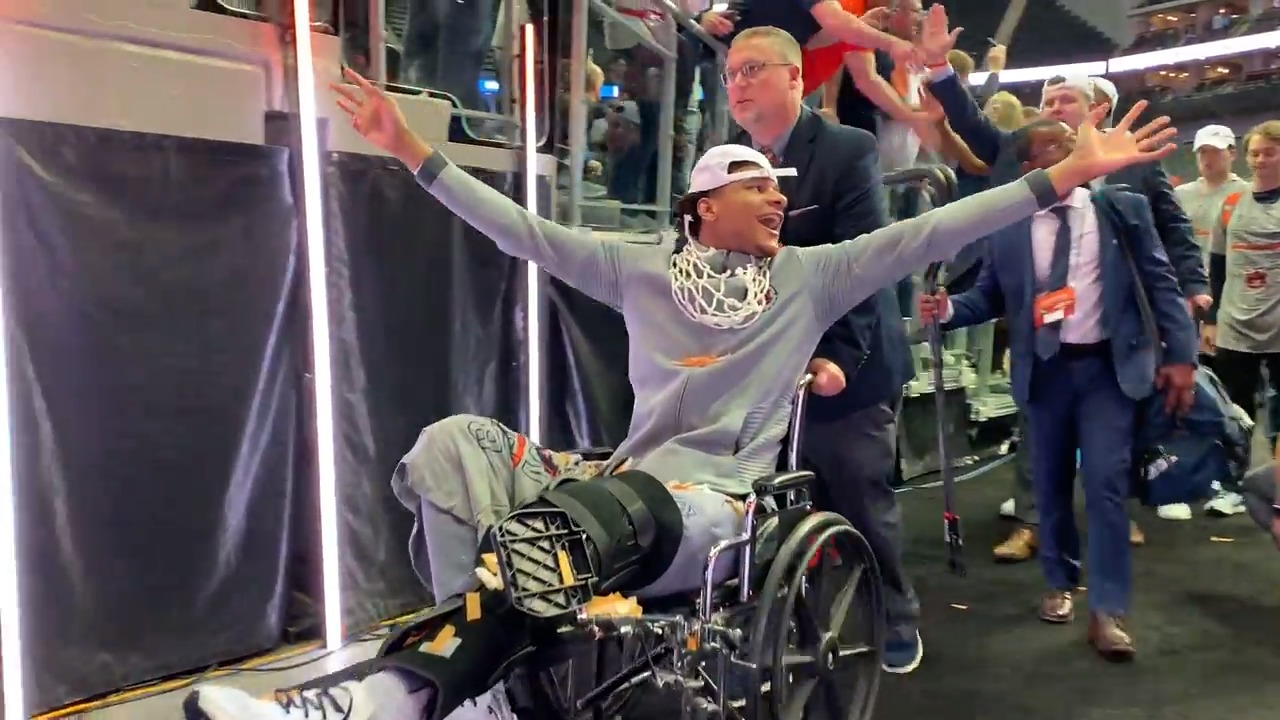 Isn’t much of the beauty of March Madness its drama? Isn’t it the emotional element that attracts the casual fan?

A mini Heidi moment? Probably an overstatement, certainly harsh, if not unnecessary. But for those emotionally immersed, it was like being ripped away from a loved one after a heartfelt achievement against all odds.

This isn’t the NBA, the NHL or even the NFL where post game celebrations come and go. They’re generally all one big blur.

Auburn’s win over sister SEC team Kentucky had a little of David and Goliath to it yesterday. The matchup was steeped in fervor, arguably the most stirring story of the 2019 NCAA Tournament.

Many wrote off the Tigers after Chuma Okeke went down awkwardly on Friday night in an eviscerating non-contact fall during Auburn’s win over #1 seed North Carolina. Viewers watched agonizingly as the 6’8″ sophomore squirmed and writhed in unimaginable pain behind the baseline.

His teammates congregated around him until they were figuratively but vigorously pushed back to the bench by Coach Bruce Pearl. The team though held on, knocking off a blue-blood in North Carolina. The Friday night win was a continuing story of unpredictable accomplishment, one that caught the attention of basketball fans when the Tigers captured the SEC Tournament last month.

After Friday’s game, it was a bittersweet coach talking with CBS’ Jamie Erdahl. Pearl exulted one moment and cried the next over his downed player. It was electrifying, non-scripted television.

Fans expected the worst news the next day on the extent of Okeke’s injury and the report was hardly assuaging. Chuma has a torn ACL and will be flown to Florida for surgery this week with Dr. James Andrews. Most humans with any soul or an iota of compassion had to have a spot in their hearts for this unfortunate player and for an impassioned coach, trying to put his stamp on a program under fire for reported agent payoffs.

Going against a mighty Kentucky team yesterday, Auburn would be fighting the Russians with brooms. The Auburn fans did their best, leading a battle cry of “Do it for Chuma.” Auburn is known for its football and while it had never advanced to a Final Four, the program has had fine players through the years, in addition to Hall of Famer Charles Barkley; Chuck Person, Wesley Person, Chris Morris and Mike Mitchell donned the Tigers blue.

Mighty Kentucky got off to a fast start. The fidgety and animated Pearl kept his team stimulated. The Tigers weathered the initial onslaught and Auburn was down by only five at the half.

If the buildup of the underdog wasn’t mesmerizing enough, you might say that there was a Willis Reed like moment too. At halftime, Okeke was wheeled into the Kansas City arena, a CBS television camera following him through the catacombs of the building. He then sat in his wheelchair behind the Auburn bench where his very presence served as overpowering motivation. Auburn went on a run to the start the second half. Through the rest of the game, CBS cameras had dozens of shots of Okeke sitting helplessly in gray warmups.

Meanwhile, two colorful personalities, Pearl and Kentucky’s John Calipari matched coaching wits. A trip to the Final Four would have been old hat for Kentucky . For Auburn, it was about a fallen soldier and putting the basketball program’s name in bold letters next to the country’s elite.

When the mission was accomplished, it was time for the punchline. Viewers were likely chomping at the bit to watch Pearl wear his emotions again on his sleeve and to see Okeke paste the Auburn name on one of the spaces of a giant bracket board, reserved for teams advancing to the Final Four.

Yes, CBS had the matter of the second game, Michigan State and Duke. But there were some fifteen minutes until tip-off.

Instead, CBS cut away immediately leaving fans feeling emotionally shortchanged. The Turner-CBS team had done an exquisite job until then. It wasn’t that the second game had begun and that the network was obligated to go to Washington immediately.  Yes, there are advertiser commitments and the need for CBS to give its local affiliates required commercial breaks. But the whole thing felt incomplete.

The network missed the crowning pinnacle. Last year, March Madness had 98 year old Sister Jean through Loyola Chicago’s march to the Final Four. She was an integral part of the story. This year, the network could have capped Auburn’s implausible run, capturing a dramatic, riveting, unrehearsed and unscripted  moment.

Viewers were left with a sense of emptiness. No victory speech, no smiles, no tears and no Okeke.

Clark Kellogg is smart, warm and knowledgeable. He was the lead commentator, working the Final Four with Jim Nantz, from 2009 through 2013. He’s smooth and brings tons of fundamental knowledge with him to the broadcasts. When he started, he took over for the legendary Billy Packer who worked every Final Four from 1975-2008. That’s 34 years. Billy had tons of opinions and survived a couple networks. He started on NBC with Curt Gowdy and moved with the NCAA package to CBS when it usurped the rights beginning in 1982. After a fixture for years on CBS, first with Brent Musburger and later with Jim Nantz, Packer eventually wore out his welcome.

Kellogg succeeded him but didn’t have the brashness or the insight that Packer had. He simply didn’t have the edge needed for the lofty role. In 2014, Kellogg was moved off game coverage and into the studio where he’s done a good job. Clark’s better delivering summaries, patterns and broad prognosis than in depth, in-game analysis. His broadcast skills are advanced sufficiently where he recaps games seamlessly, using stats and basic data. He’s solid and wears a warm smile, albeit his commentary is laced with cliches and there’s little he says that’s memorable.

Meanwhile, kudos to Greg Gumbel who’s often so smooth and unflappable that he appears phlegmatic. But Charles Barkley has evoked some personality in the longtime network host and play-by-play announcer. Greg will be 73 on May 3d. He’s the older brother of HBO’s Bryant Gumbel. Greg started his career as a pharmaceutical salesperson.

Chris Webber has turned into a gem; sharing depth that only an experienced college and pro player can.

While he calls the game, it’s as though he himself is on on the court with both teams, barking suggestions to teammates, huffing and puffing engagingly as he does.

I like the Heidi comparison. I also wonder if anybody thought of the Willis Reed comparison?