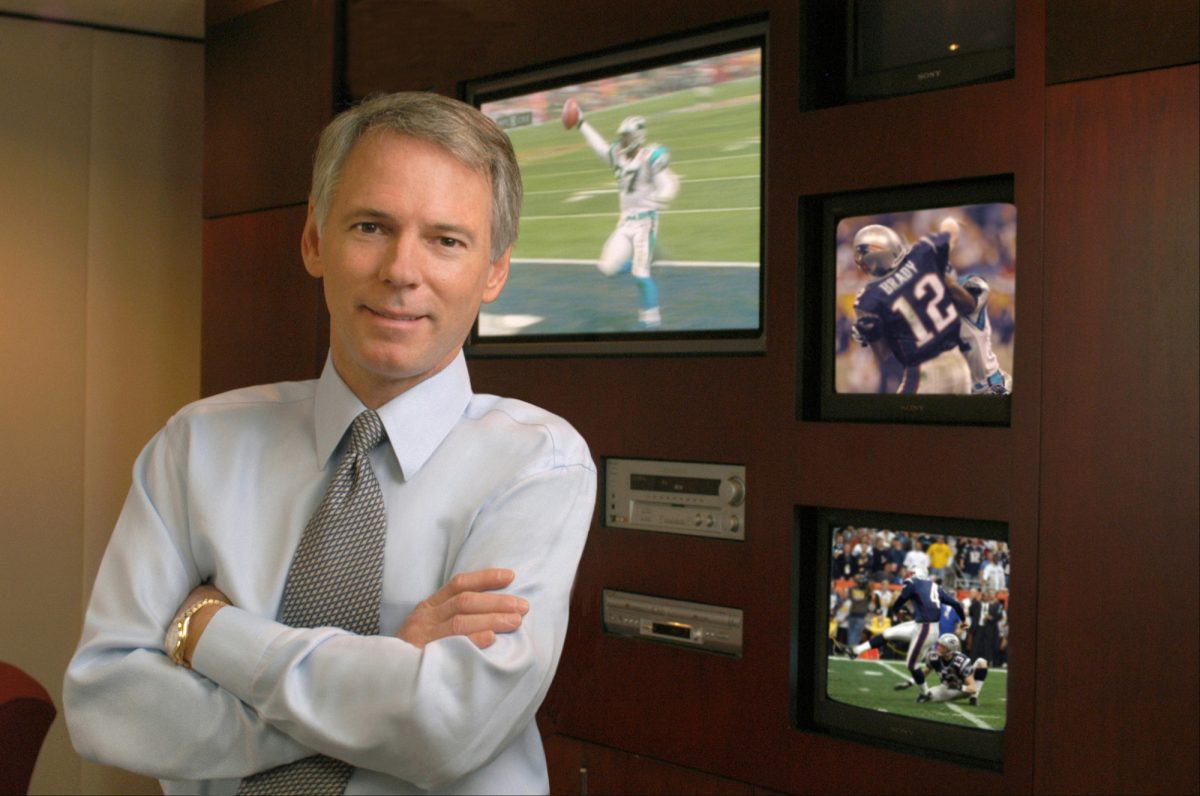 It’s Sean McManus’ week and he doesn’t seem the type to seek the limelight. At 63, the CBS Sports head has been around network television his entire life. With CBS televising the Super Bowl this Sunday and rock star Tony Romo working his first big game, there’s no way McManus could elude questions in a room full of media.

On Tuesday in Atlanta, the annual network press conference was a mob scene. Photographers and cameramen formed a three-deep half-moon, shooting film and clicking pictures of a stage full of Super Bowl producers and announcers.

When the formal press conference ended and the gaggle broke into smaller groups, the man who was inundated by reporters was Romo himself, the sudden Man of the Hour. The ex-Cowboys quarterback has reworked the role of analyst into a fascinating dynamic, analyst and self-made seer.

On the stage, Romo fielded questions including one about the final score. Surprisingly he threw out a number, 28-24; predicting that the clock would wind down when a Tom Brady led comeback drive stalls.

Phil Simms, once a star as the lead commentator of CBS’ Super Bowl coverage was on the back row of the stage this time; not the front as he had been in the past. Now only a pre and halftime analyst, Simms put on a professional face, albeit with a taut smile. You had to feel for him.

Not since the days of the robust John Madden has an analyst of any sport been the subject of constant conversation. Then again, even John didn’t do what Romo did in the AFC Conference championship, predict one play after another. It was more than just uncanny, it was almost eerie.

While McManus was kept busy through the breakout section, he wasn’t quite inundated like the on-camera stars. But he still patiently answered questions one by one from perhaps a dozen reporters.

Sean consistently parried lots of praise heaped on him for hiring Romo; crediting instead Jim Nantz who he says helped develop Romo through symbiotic chemistry.

So not to set up Romo for failure on the NFL’s biggest stage this Sunday, McManus told the media that Romo was equally as good assessing and analyzing the game as he is predicting plays; underscoring the fact that he himself enjoys sitting at home watching Tony’s insightful contributions each week. He said, “Tony’s engaging, articulate and enthusiastic,” adding, “his enthusiasm is infectious, he is a boyish wonder of sorts, one who’s still developing. He’ll get even better.”

McManus was asked whether Bill Belichick would make a successful television commentator. Unsurprisingly, Sean said that if the coach would be as dedicated to the TV craft as he’s been to the game, he would do well, especially as a game analyst, where he would be better suited than in the studio.

Someone asked him whether he looks at past Super Bowl telecasts to see how CBS can enhance its production. Sean said he does and that he always keeps an open mind for suggestions from his production personnel; adding that he’ll get an occasional spontaneous tip from former NBC guru Dick Ebersol who sometimes reaches out to him.

McManus is the son of the late Jim McKay, known for his many years hosting ABC’s Wide World of Sports and for the marathon work he did in Munich hosting the 1972 Olympics when Israeli athletes were held hostage and eventually murdered.

Before he was named Chairman of CBS Sports in 2011, McManus was president of both CBS Sports and CBS News, becoming only the second person in network history to run both sports and news. Roone Arledge at ABC was the other. Overall McManus has run CBS Sports for 22 years.

McManus strikes others and me as humble and disarming. He doesn’t make a big deal of himself despite his lofty accomplishments and position. Sean is somewhat of a regular guy.

We caught up earlier this week before the Super Bowl.

Arguably, the riskiest move you made at CBS Sports was hiring the inexperienced Tony Romo. He’s been a hit. What was it that you saw in Tony that sold you sufficiently to put him on the top of the depth chart of the network’s NFL announce crews?

When I met him and we talked football, it was quite evident to me that he can break down plays in a meaningful yet simple way. He doesn’t frustrate those whose football knowledge might be limited. Tony carries himself in an unassuming way, he’s enthusiastic and so passionate that it’s absolutely infectious.

You don’t find Tony Romos often. It was a calculated risk. But yes, no question, it was risky. You just don’t know until that red light comes on. But Tony and Jim worked long and hard before the first game. They were ready. Jim is an unselfish talent and took Tony under his wing. It’s why the two together are as good as they are.

Jim Nantz is CBS Sports’ lead voice on golf, the NFL and NCAA basketball. He’s busy year-round. Is it asking much of him? He’ll be 60 later this year. Will the day come soon that he gives up one of the three assignments?

I haven’t thought about it. He has boundless energy, and an amazing ability to hop from one sport to another and to do so seamlessly. One night he’s doing the NCAA title game and a couple days later, he’s perfectly and thoroughly prepared for the Masters.

He has a young family. If at some point, he wants to cut back on his workload, I would definitely sit down with him. But it hasn’t been a discussion. Jim Has many years ahead of him.

In the past two years, the NFL faced fiery issues; long-term physical damage due to the hard-hitting game and the verbal storm over kneeling during the national anthem. Ratings were hit pretty good for a while. Yet this was a bounce-back season. The numbers improved. Are you optimistic about a continued recovery of ratings and a healthy future for the game or will it be choppy?

Turning to a broader subject matter, where do you see most fans watching games in ten years and how is CBS preparing for it?

(Right now, I’m worried about Sunday’s Super Bowl…pregnant pause) The NFL will be available on all necessary platforms to accommodate younger and older viewers. Each demographic consumes the NFL differently, whether it’s a tablet, a SmartPhone, PC or a conventional television set. We’ll need to figure out how to monetize the different platforms to pay for our NFL rights fees. I still feel that that the best viewer experience is on television. The broadcast model on network television will continue!

While video quality keeps getting sharper, audio options remain somewhat static. Yes, sound effects and wired officials have become staples. Yet, in the interest of progress, will the day come that audio will be customized; in other words, more options; a radio type call, a color commentator only or just the public-address announcer? Turner runs three different versions for the Final Four. ESPN had a plethora of options through its many tentacles covering the collegiate football title game. How do you see the audio future with CBS?

We’re not tinkering with our audio. Our focus is on our five announcers; Jim, Tony, Tracy Wolfson, Evan Washburn and Gene Steratore. No alternate feeds.

If you left tomorrow which three accomplishments make you feel best. How would you summarize your legacy?

(Interestingly, Sean didn’t mention the signing of any talent. My guess is that he doesn’t want to hurt anyone’s feeling by inadvertently missing someone.)