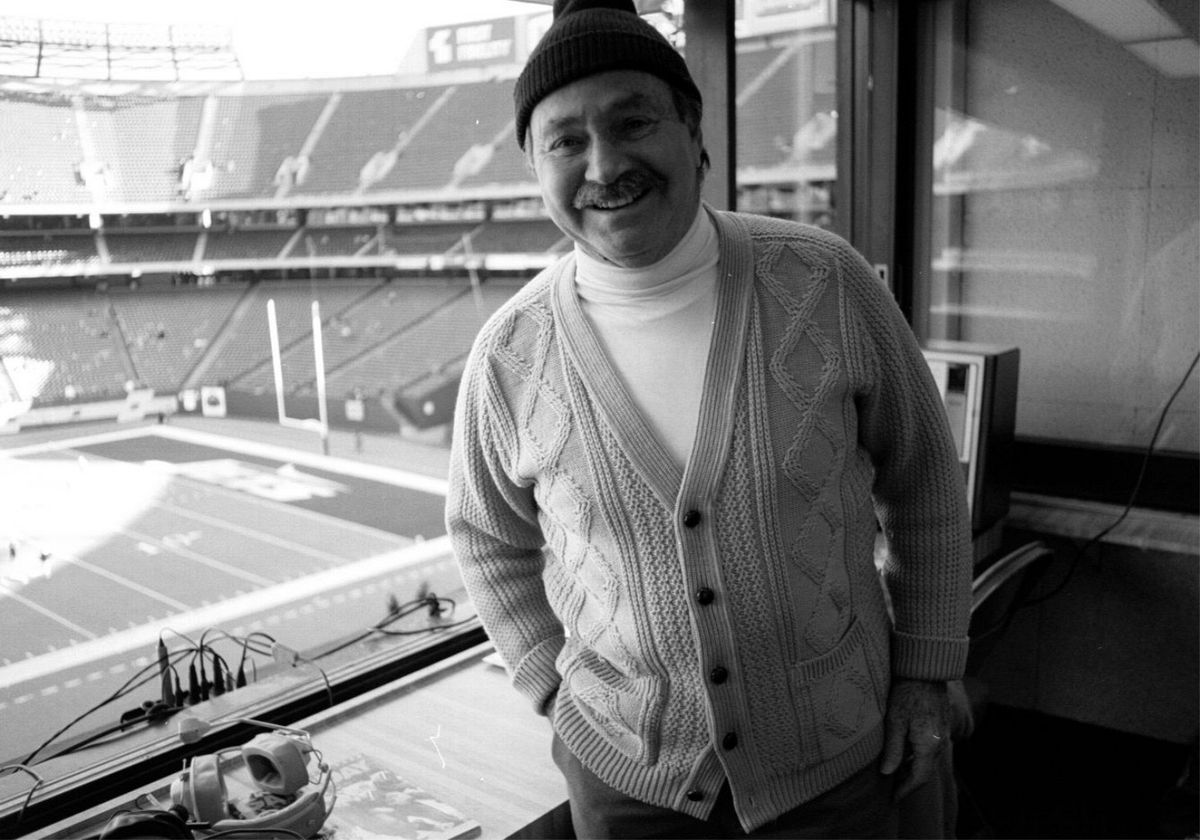 Marty Glickman, a broadcast icon, called games for the Giants and Jets on radio for parts of six decades

Radio was launched experimentally in 1921. The technology was a derivative of ship to shore radio communication.

On July 2, 1921, several radio entrepreneurs, RCA being one, worked in partnership to broadcast the heavyweight championship fight between Jack Dempsey and Georges Carpentier. But very few Americans had radios then. So to promote the potential of radio’s power, organizers installed receivers at Loew’s Theaters in the New York area where patrons could listen to the fight. The broadcast was choppy and the reception spotty. But for radio, it was a start. Over the next decade, the medium exploded.

Sports were an important element in the growth of radio. Football, boxing and in some markets  baseball broadcasts jump started consumer purchases of radios. The Rose Bowl, the granddaddy of football, was carried coast to coast in 1927. Weekly college football broadcasts became staples every Saturday in the fall.

As for the NFL, pioneer Graham McNamee did the Bears-Lions game from Detroit on Thanksgiving Day 1934, a little more than 85 years ago. It was the first national broadcast of an NFL game.

The NFL has been around for 100 seasons. It’s hard to imagine now but the league didn’t mean a whole hill of beans until the mid to late 1950s.

Before the Giants moved to Yankee Stadium, they played at the old and now demolished Polo Grounds. Marty Glickman, the team’s voice then, said they would count the house as fans trickled in. It was hardly a matter of elbowing their way into a packed modern stadium.

These voices in my humble estimation are the all-time best local radio voices:

Marty announced Giants games from 1949 through 1955 and 1961-72. He called the Jets from 1973-78 and again from 1988-92. The dominant sportscaster of New York football and dean of all the city’s sports announcers, Glickman was an on-air fixture in the country’s biggest market for almost six decades. He covered games with graphic detail, a pulsating rhythm, heart pumping emotion and an enormous level of energy, the kind with which he played the game at Syracuse. After a broadcast, he was so drained that he could have slumped over the broadcast counter. His most popular NFL broadcast stretch was in the 1960s. Home Giants games were then blacked out in New York, the team was the talk of town, the radio broadcasts were on everywhere including at Yankee Stadium where transistors reverberated from the stands. Glickman served as a mentor to many from Marv Albert and Dick Stockton to Bob Costas and many other successful play-by-players.

Reese is the longest tenured NFL broadcaster. He began doing Eagles’ play-by-play in 1977. This is his 43d year. Reese is hale, impressively sharp, knowledgeable, current and his voice is still solid. Late in the 1977 season, the team’s play-by-play voice, Charlie Swift committed suicide. Reese was doing color at that point. The next Sunday, he moved over to call the plays. His longevity, passion and concise descriptions have earned him icon status in Philadelphia. One can easily argue that Reese and Harry Kalas are the two most popular sportscasters in Philly history.

It was Glickman himself who sang Kelley’s praises. Bob’s roots with the Rams began in Cleveland. His bio states that he began in 1937 and moved with the club to Los Angeles in 1946. In 1966, it was announced that Dick Enberg would become his partner on Rams radio broadcasts. But in August of that very year, Kelley died of a heart attack and Enberg moved over to do play-by-play. Kelley was all of 49 at the time of his death. Bob was also one of the first stirring sports talk show hosts in the country. The popular Los Angeles sports columnist Jim Murray wrote of Kelley, “His dinner-hour sports show made as many people gnash their teeth as cheer. But they listened. His mail was sulfuric. But they wrote.” Enberg did the Rams for eleven seasons until he moved fully to NBC, becoming a star-studded network television sportscaster.

King’s an all-time great and for more than a generation was the most visible play-by-play voice in the Bay Area. Equally as comfortable at the New York Philharmonic as he was at the Oakland Coliseum, King was a renaissance man who voiced the wild doings of the Raiders with unbridled wit, color and passion. From 1966 through the transition of the AFL-NFL merger, King was a constant, even commuting to Los Angeles when the club played there beginning in 1982. Bill covered three Super Bowls and memorable other games of the John Madden era. In 1992, King moved fulltime to the A’s. He was also the longtime voice of the Warriors.

Before moving to Indianapolis in 1984, the Colts had a disjointed history in Baltimore. The first Colts team was part of the old All-American Football Conference, a second team was part of the NFL for just one season. The third iteration arrived in Baltimore in 1953 and stuck in the NFL. You get the picture. The NFL wasn’t very stable then. Thompson had a long history with the franchise beginning in the 1950s. As longtime NFL executive Ernie Accorsi told me, “If you think Chuck Thompson was a great baseball announcer, his football was even better.”  Chuck talked articulately a mile a minute, annunciating every word clearly. He had a magnificent voice and dramatically painted the play-by-play. For many years in the 1950s and 60s through the club’s final 12 years in Baltimore, Thompson was the unmistakable Voice of the Colts and absolutely beloved by the team’s fans.

Miller is the most popular sportscaster in the history of Western New York and was especially noted for his gripping coverage of the Bills. From 1960 when the Bills were born as part of the old American Football League through 2003, Miller was the Voice of the Bills. He did miss the 1972-78 seasons when broadcast rights moved to a competitive station. From the AFL to the NFL and through four failed Bills’ Super Bowls, Miller’s broadcasts were rich in description and excitement. He painted an unforgettable masterpiece when Scott Norwood infamously missed a potential Super Bowl winning field goal in 1991. Van dramatically set it up, describing Norwood’s warmup kicks and then the ultimate wide right landing which broke the hearts of all of Buffalo.

A legend in New England, Santos crisply broadcast Patriots games with absolute precision. He did so through many of the team’s thin seasons and its later years of great success. A Massachusetts native, Santos spent five years as a sidekick to Bob Starr before becoming the Pats’ play-by-play voice in 1971. He continued as such through 1979 and later again reengaged from 1991-2012. In all, he served as the lead voice in the booth for 31 seasons. For many of those years, his analyst was Gino Cappalletti. The two earned a large following, including in the stadium where fans listened with headphones and plugs glued to their ears.

Starr called games for three franchises, the Pats, 1966-70; the St. Louis Football Cards, 1977-79 and the Los Angeles Rams from 1980-89. According to Bob Costas, who can distinguish the good from the great as well as anyone, Starr falls in the latter class. Costas says that Starr could call football vividly on radio without the help of a spotter! He was that good at it, calling plays from scrimmage surgically and connecting dots perfectly.

Through many of those blackout years when home games were not available on television, Brickhouse, who did the Cubs and White Sox on television, was the play-by-play voice on Bears radio broadcasts over WGN. He presided over the mic for 25 years from 1953-77. His partner was Chicago Sun-Times gossip columnist Irv Kupcinet. Jack would just call him,”Kup.” When calling something special that favored all the local teams, Brickhouse emoted, “Hey, hey!” Like many of the folks on this list, audio samples are available on YouTube.

A Buffalonian who grew up listening to Van Miller, Papa was a prodigy. At 22, he was hired to do Pacers radio. Greg later moved to the Bay Area where he’s called the A’s, Giants, Warriors, Raiders and now the Niners. You’d say that he defined himself with the Raiders where he followed the legendary Bill King who to many was irreplaceable. Greg took over the Raiders microphone in 1997 and worked it confidently, colorfully and entertainingly for 21 seasons. He wore his emotions on his sleeve and painted engrossing pictures. After 2017, his contract wasn’t renewed following a spat of sorts with ownership. It resulted in a groundswell of protest from fans. The Niners hired him beginning this season and he’s been an immediate hit!

Patrick was the Voice of the Lions from 1950-74. A Texan with a distinct sound, his voice filled rooms for decades. He was also a crisp storyteller. Van also spent years on the Tigers broadcasts. Patrick was the longtime Voice of Notre Dame Football and the original radio announcer for Monday Night Football on Mutual. An article in Vintage Detroit described him as such, “Patrick was popular, in a Howard Cosell kind of way, but not everybody appreciated his style. Lucidity to some was verbosity to others.”

A native of Jacksonville, Deckerhoff is the dean of Florida sports announcers. He’s been calling Florida State football for 41 years and the Tampa Bay Bucs for 31. His raspy voice and boyish enthusiasm are Sunshine State staples each fall. While Gene makes no secrets of his rooting interest on-air, he never turns negative on his listeners, not on the Bucs, Seminoles, their opponents or the referees. No matter the score, Geno gives listeners the impression that we’re all fortunate to enjoy the escape that football affords fans each weekend.

He’s been the Voice of the Cowboys since 1984, other than from 1995-97 when he left due to a disagreement with team management. Sham is less artist and more narrative in style, a conversationalist, easily engaging with his partners in the booth. Most in the Metroplex will say that Sham is the most popular play-by-play voice in the market. Given the support that the Cowboys enjoy in the Dallas-Fort Worth area and Sham’s long connection with the club, it’s no surprise. Sham can best be described as a fan’s friend at the game. It’s as though the listener is sitting near a friendly neighbor who with confident timbre tells you comfortably what’s going on down on the field.

And several of them haven’t gotten the Rozelle Award, and should!

in Philly, please do not forget the immortal Gene Hart or the amazing Bill Campbell

No disrespect to either of them, but Campbell did the Eagles for nine years. Certainly, Campbell is on the list for basketball, and Hart for hockey. In terms of time of service, Dick Enberg did the Rams for about a decade and was great, but even then, Bob Kelley remains the radio voice most associated with them, I would think.

I will go ahead and start the case that the only voice of the Tennessee Titans should go on this list in the near future. He is as good as anybody in the business and has developed a following in an era that is a lot harder for the team announcers. His call of the Music City Miracle gets played regularly and fans regularly imitate his touchdown and first down calls now.