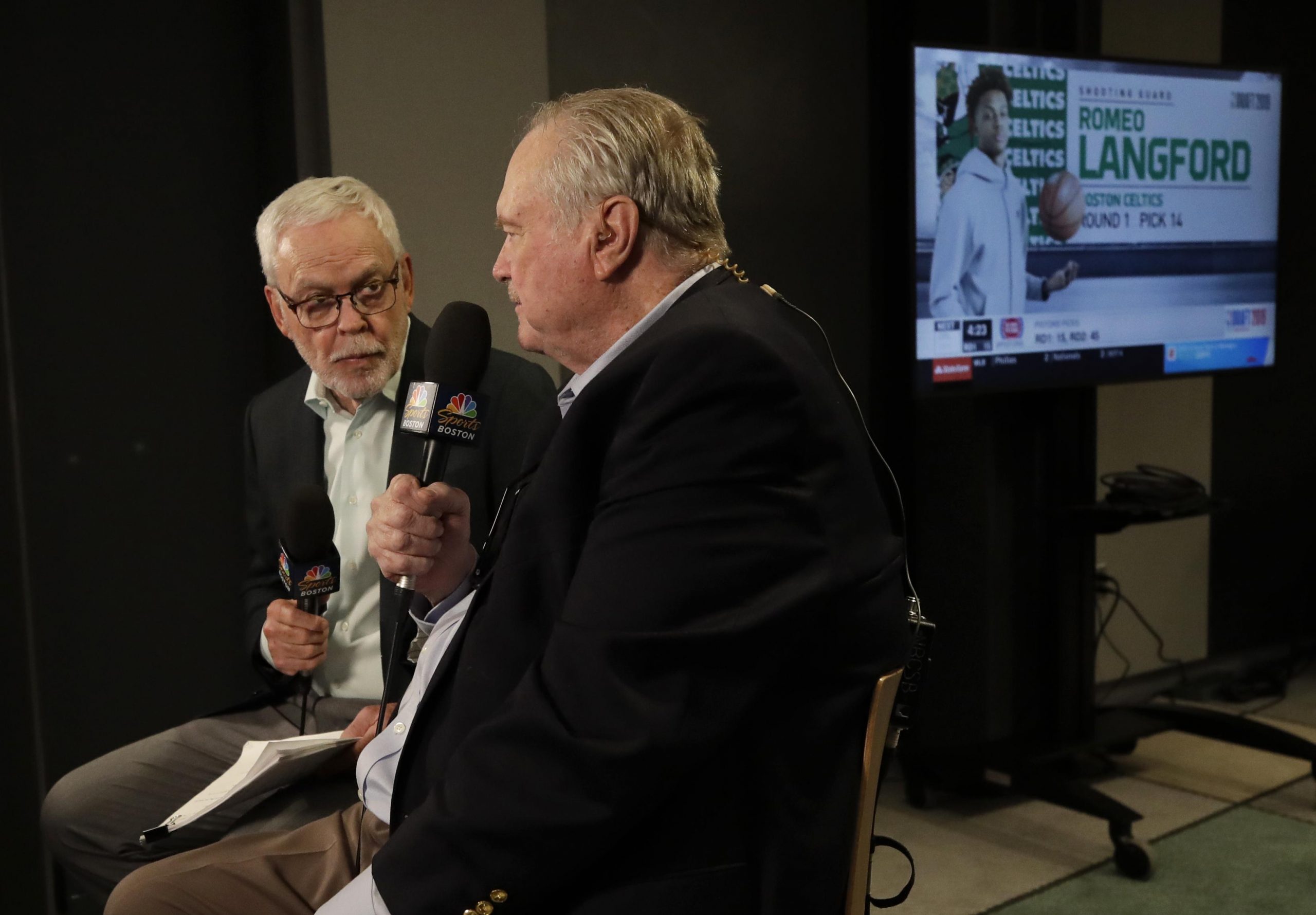 I never committed anything to writing, but last year I stacked up my top three local NBA television broadcasters. It’s a tough call because there are so many very good ones. Frankly, I also don’t see all of the announcers nearly enough to rank them with complete conviction.

Radio is easier to assess. Does the broadcaster paint the word picture and connect the dots? That’s essentially what matters. Some do it better than others. A few don’t do it very well at all.

There are more variables on television when grading play-by-play announcers. What’s the chemistry like with their analysts? Do they know a pick ‘n roll from an egg roll? Do they talk in measured intervals or babble? Importantly, do they make viewers feel warm and comfortable?

Last year, my top three were Mike Breen, Ralph Lawler and Mike Gorman, in no particular order. Lawler is now retired. Breen, Gorman and all other NBA announcers are on unwanted leave and unfortunately, the country is on sports withdrawal.

Mike Gorman made his mark nationally. He called Big East games on ESPN each Big Monday at a time when the league dominated college basketball. Gorman was invariably spot on. He knew the game, echoed the excitement of the burgeoning conference and developed an entertaining rapport with Bill Raftery.

At about the same time, he started doing Celtics’ home games with Tommy Heinsohn. Early on, Heinsohn glanced at Gorman’s preparatory notes and was almost blinded by Mike’s color coded rosters, numbers and factoids. So the ex-player and coach said to him, “Talk about what’s in front of you, the game. Don’t over-prepare.” It stuck. On a podcast earlier this year, Gorman told an interviewer, “I don’t over-prepare the way I did when I was younger. Tommy’s right. The game is what people see at home. Fans know many of the basics anyhow. They want our commentary on what they’re absorbing on the screen.”

Things have changed through the years. In some arenas, television announcers are being moved off the floor to positions upstairs. “It’s a challenge,” Gorman says. “When you don’t feel the court, the coaches, the sighs of the players, the expressions of the refs, you’re limited on translation to viewers.”

Asked about his favorite all-time Celtic, Gorman puts Paul Pierce ahead of Larry Bird. “I only did home games when Larry was with the team, I didn’t travel with him. I’ve been doing road games for about twenty years so I got to know Paul.”

Mike shares a funny story about the time when Pierce was appointed captain and took the undertaking of leadership seriously. “We’re getting on a charter in Sacramento, to make the trek back to Boston. I see Paul boarding with two Barnes & Nobles’ bags. That’s not something you often witness on NBA planes. Once we’re in the air, I mosey down to Paul’s seat and see about eight books on leadership spread near his seat. He says to me, ‘I didn’t think you have to read them, just buy them.'”

Gorman, 72,  is a native of Massachusetts and beloved in Boston.  His career started in Rhode Island where he did URI and Providence basketball.

We had a chance to catch up.

You were quite prominent on ESPN in the 80s and early 90s, the network’s heyday. Do you miss the national platform?

I don’t. What I do miss is doing games with Raf (Bill Raftery). Bill is the best college analyst in the business and has been for thirty years. It was a joy to sit next to him doing the Big East when it was the best basketball conference in the country. To be sitting next to the “SEND IT IN JEROME” moment is one I smile at every time I hear it. (Jerome Lane of the University of Pittsburgh famously shattered a backboard.)

Is it easier to develop bonds with viewers locally as a team broadcaster than it is nationally?

Yes, without question. When you do a national game you have fans from one team, fans from the other, and those nationally tuning in simply because it’s a good game. It’s very difficult to keep all three happy. As a team broadcaster you and 90% of those watching are on the same page. We both want, in my case, the Celtics to win. It’s also a lot more fun being free as a broadcaster to actively root for a team. To be impartial, as the networks would have you be, is boring.

How has TV play-by-play changed from your early years? Have more graphics and enhanced technology influenced the way you call a game?

I’m not a big fan of inundating our viewers with data and information. I understand that analytics are the basis for coaches’ decisions and we have an obligation to help fans understand why passing up a layup to take a three pointer actually makes sense according to the numbers. That said, I think there are times we can get a little carried away.

Nationally, you were known as a college broadcaster. In Boston, you’re identified with the Celtics. Do you prefer calling the pro game?

I prefer calling the Celtics. It was great announcing Big East games when it really was the Big East and calling the first two rounds of the NCAA on CBS. It was fun. But you have to understand that I grew up in Boston. I used to climb the fire escape to sneak into the Boston Garden to watch the Celtics when I was a teenager. To have been their broadcaster for the past 40 years is as close to one’s dream job as you can get.

You were ESPN’s de-facto Voice of the Big East in the Conference’s glory years. What are a couple of your great recollections?

Wow! Got a few hours? In my lifetime, it was the greatest collection of players and coaches the college game has ever seen. The rivalries were unmatched. Georgetown vs. Syracuse in the Dome, St Johns vs. anybody at MSG, three teams in the Final Four, Villanova’s national championship, the emergence of UConn, Seton Hall playing for a national championship, Providence in the Final Four, Ewing, Mullin, Pearl Washington, ‘Send it in Jerome (Lane).’ As I said, I could go on for hours. Suffice it to say, I was very fortunate to be in the right place at the right time.

How much will the return of UConn next year help the Big East?

Not much, though I am happy to see UConn come home.

What’s it like working with Tommy Heinsohn? He’s partnered with you for some four decades.

This is the 40th year Tommy and I have teamed up and it is still the best part of my day when I sit down near him and they throw the ball up. Whatever I may know about basketball I’ve learned from Tommy. He was a great and I mean GREAT player, won two championships as a coach and should be in the Hall of Fame as a broadcaster. To be part of “Mike and Tommy” is unquestionably the highlight of my broadcasting life.

ESPN experimented with an analyst-only game recently. Can that work in the long run?

You had a star-studded military career. You were an aviator in the early 70s. Where were you assigned and did the experience have an impact on your announcing career?

I spent most of my time in the Mediterranean and North Atlantic chasing Russian submarines. I learned a lot about discipline, the need for teamwork, risk-taking and the importance of a chain of command. It made me a believer in compulsory military service.

Who were your favorite broadcasters growing up and what did you learn from them?

If the signal was strong enough on a given night, I remember listening to Joe Tait in Cleveland. Keith Jackson always made me watch even though I had no interest in who won or lost.  From Pat Summerall, I picked up timing and rhythm. In Boston, Ned Martin on the Red Sox, Bob Wilson on the Bruins, and most of all, Johnny Most with the Celtics.

Johnny mentored me, encouraged me and accepted me openly. It made my early days in Boston so much easier.