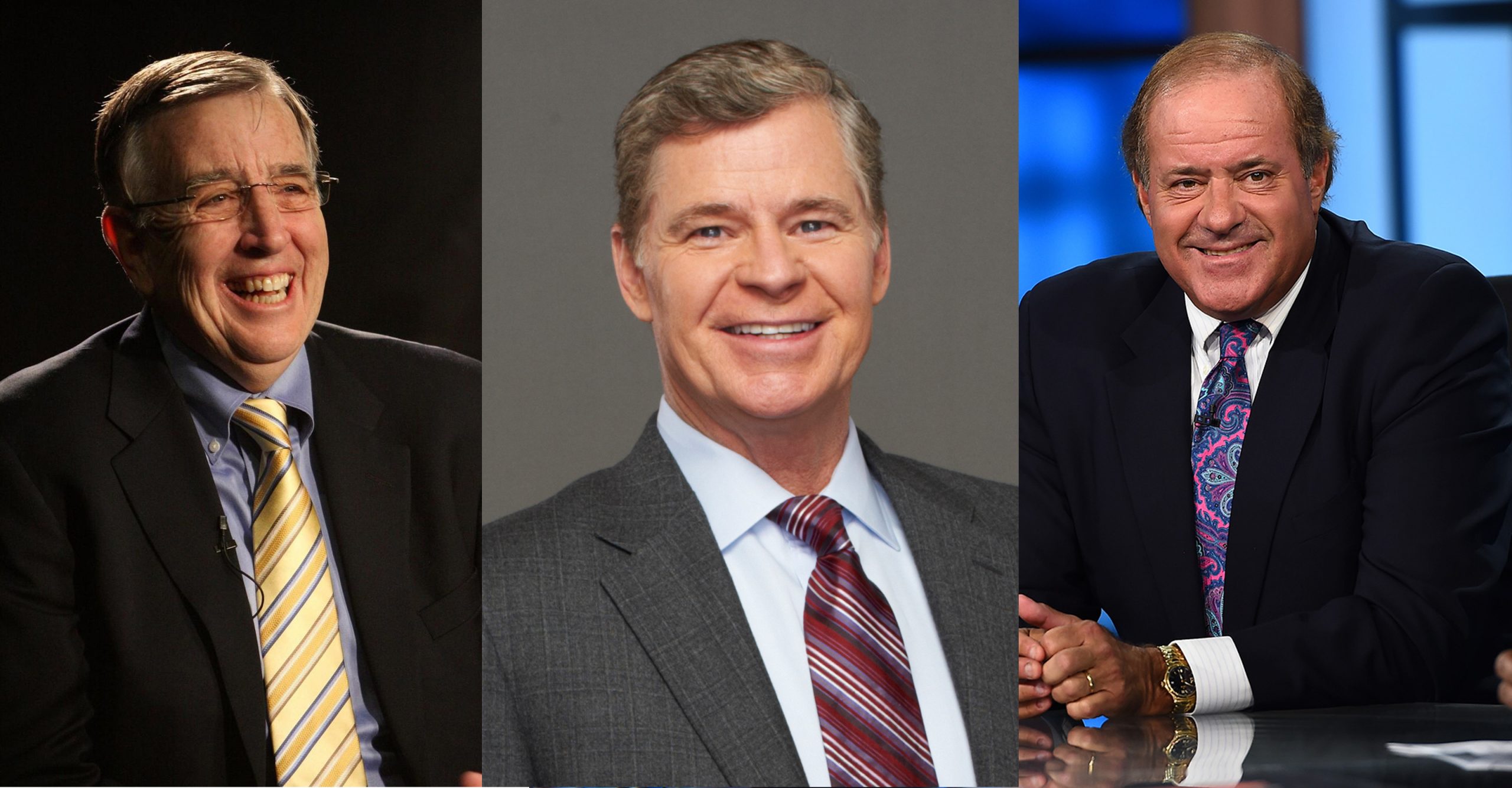 Smooth Dan Patrick, 62, will not be seen on NBC’s SNF this fall. He’s gone.

Bob Costas, 66, arguably the greatest network studio host ever, gave up the Olympics and won’t be seen on NBC’s NFL coverage this Fall. Bob continues doing baseball for MLB Network. Let’s hope that Bob will undertake additional assignments that he finds inspiring; those that are generally longform and insightful.

Don Criqui, 78, has been an on-air football fixture since 1967. He hasn’t missed a broadcast booth for over fifty seasons. In recent years, Criqui called Notre Dame football on the Irish’s extensive radio network. He won’t be back with ND this season. Come weekends, Don might feel pangs of guilt not being at a stadium somewhere in America. Don is an absolute gentleman!

So many wonderful moments with Don and his dulcet voice of command! Orange Bowls, almost 50 NFL seasons, Super Bowls on radio, big playoff games on television and of course, Don will always be remembered for his CBS call of the Tom Dempsey record-setter, the 63 yard field goal for the Saints on November 8, 1970. Criqui was honored with the distinguished Pro Football Hall of Fame’s Pete Rozelle Media Award in 2003.

Tom Hammond , 74, can be called Mr. Everything. He’s more than just proficient, Tom excelled at virtually anything he was asked to do. Had Al Michaels stuck with Monday Night Football when he was still part of the ABC/ESPN family, NBC boss Dick Ebersol talked openly about Tom doing newly acquired SNF in 2006.

Once Michaels moved to NBC and got the gig, Tom continued calling Notre Dame football for NBC. In the 90s when NBC got NBA rights, Hammond stepped in seamlessly and backed up Marv Albert on second tier games. His Triple Crown  work came right from the heart. He grew up in  bluegrass country and felt right at home around  horses at the track. Did you know that Tom studied zoology at the University of Kentucky? Hammond attended UK at the time Pat Riley and Larry Conley were starring on the basketball court for the Wildcats. Tom is also wonderful doing track and field and did his share for NBC including at the Olympics.

Brent Musburger, 79, may not be doing play-by-play on network television anymore, yet his enthusiasm and energy haven’t waned a bit. His latest iteration is building VsIN, a gambling network based in Las Vegas. Brent now does a sports betting column too for the New York Post and is heard regularly on SiriusXM. Musburger has always been creative, entrepreneurial, versatile and sharp tongued. He has done so many diverse things during his career. Brent was a pioneer in the CBS Studio, hosting NFL Today. He also did play-by-play at the highest level, was a sportswriter, a news anchor for the Los Angeles CBS Television affiliate and get this, a Class D baseball umpire.

Chris Berman, 63, identified with ESPN for so many years, particularly NFL programming, is hardly seen these days. No matter how you felt about Berman’s shtick, he was the face of ESPN’s programming for decades.

A talented, diverse and once prominent broadcaster, Dick Stockton, 76, gets fewer assignments now but is still active, enthusiastic and hale.

The hearty laugh of Verne Lundquist, 78, is not heard on football anymore. It’s missed. That human touch is gone. Too many fast-talking play-by-play announcers on network television who forget that their job is to caption the picture not paint it.

Some make coffee nervous instead of building drama with proper pausing and talking in only measured intervals! One of Verne’s good friends was the late Ray Scott. Some network play-by-play announcers should have a big photo of Ray right next to the monitors they use to call games. Let Ray’s photo serve as a constant reminder. Somewhere in heaven, Ray cringes when he hears the verbose. And so do viewers!

Mike Patrick, 73, a once ubiquitous play-by-play man, has left ESPN. Patrick also called Cleveland Browns pre-season games in the past but won’t be doing so this coming August. Too bad. Mike still has the moxie.

Play-by-play announcers appear to be more susceptible to age on network television. So it makes us wonder. What’s the future of a still star-studded play-by-player like NBC’s Al Michaels, 73? How about Turner’s Marv Albert, 77, CBS’ Greg Gumbel, 72, Fox’ Sam Rosen, 70, (who won’t be back with the Bears this pre-season)?

It reminds me of Vin Scully’s line when sharing the playing status of an injured ballplayer. Vin said, “He’s listed as day to day,” to which he soberly added, “Aren’t we all!”

Color men and studio analysts, folks like Hubie Brown, 84, Jimmy Johnson, 75 next week, Bill Raftery, 75, and Dick Vitale, 79 are less on the age radar. Lee Corso, 82, is now almost a cameo and ceremonial figure. For these guys, the exigency of television life seems somewhat containable.

In 1951, when Russ Hodges called ‘the shot heard round the world,’ he was one of six future Ford Frick winners at the Polo Grounds. The other five; Red Barber, calling it for Brooklyn, Ernie Harwell on Giants TV, Harry Caray called the game for KMOX Radio in St. Louis, Vin Scully, was there as part of the Dodgers broadcast crew but no on-air when Bobby was at the plate, the Pirates’ Bob Prince, a guest of Hodges in the Giants booth and the Yanks’  Mel Allen, getting ready for the World Series. The pedantic Barber took issue with Hodges’ exuberant call. No surprise.

The late baseball announcer told me very late in his career that only Vin did more baseball games than he. Milo call MLB games from 1953-2012.

Hamilton worked the Cubs broadcasts but couldn’t get along with Harry Caray. He struggled for acceptance in Pittsburgh after succeeding the iconic Bob Prince and was blamed for poor attendance during his tenure in Atlanta. His happiest and healthiest  stay was his last, in Houston, 1985-2012.

On a separate note, Hamilton said that Jim Durham was the best basketball announcer he knew.

What are they doing now?

Lanny Frattare, 70, spent 33 years as a voice of the Pittsburgh Pirates on radio and television. His mentor was the famous ‘Gunner,’ Bob Prince. Lanny was doing minor league ball in Charleston, a Pirates’ AAA affiliate. Prince would have Lanny up to Pittsburgh occasionally, providing him tips and even on-air opportunities. Fratarre started in 1976, after Prince was fired and was a sidekick to newly appointed announcer Milo Hamilton. Frattare retired after the 2008 season.

They tell a funny story about Lanny who was thoroughly prepared for every broadcast. At one point, Jack Buck poked his head into the Pirates booth before a game. He saw heaps of papers and notes stacked on Lanny’s broadcast counter. Jack smiled from a distance and said, “Lanny, it’s not that complicated.”

A footnote; Frattare called the basketball game in 1985 between Purdue and Indiana when Hoosiers’ coach Bob Knight threw a chair across the court.

Talk of being irrepressible and becoming a market institution, Zabel was the Voice of the Hawkeyes for 48 years on WHO Radio in Des Moines. A gentleman named Ronald Reagan worked at the same outlet, prior to Zabel. Reagan did the same thing Zabel did, play-by-play. The late president though recreated broadcasts off scant information coming off the wire. Zabel did his work live. Jim loved his job as evidenced by the fact that when he was 90, he was still active.

“They’ll cart me out and I’ll still have the microphone, that’ll be the last thing I hold on to – the microphone” he said. And so it was, Zabel died in 2013 at 91. He had an opportunity to interview President Raegan at the White House.

Tim Ryan, popular network mainstay for decades is vacationing in Italy. He checked in via a note yesterday:

“We are in Tuscany with Italian friends watching World Cup soccer with a bizarre presentation by Gruppo Mediaset Network (founded by media tycoon and former prime minister Silvio Berlucsconi). For the quarter finals there were six commentators in a studio in Italy, three cheering for one team and three for the other. No pickup of the actual play-by-play from Moscow – so no sense of drama or atmosphere. Bizarre!”

“Italian TV did it again on France’s 1-0 win over Belgium in the World Cup semi-final. This time – only worse!  They had six people on sofas watching the match on a TV screen, two apparently former players or coaches, one legit sports announcer and two attractive women flanking some guy holding a saxophone the whole time.

“I am grateful that my Italian is severely limited.  Otherwise, I would have been even more aggravated.  A presumably large audience in a soccer-mad country were being deprived of real play-by-play commentary and the sounds of the crowd watching in the Moscow stadium. This sixsome  jabbered and joked  through the whole game—even when some of  the injuries were real.

“Every few minutes the Mediaset producer  would go to a split-screen during play with these characters on camera !

“Nobody loves FIFA, and they should take another  hit for allowing the Italian rights-holder to denigrate the biggest sport in the world.”

McNamee misidentified the San Gabriel Mountains for the Sierra Madre Range and wasn’t asked back to cover the Rose Bowl in 1929.

Connecting the thread of generations: Red Barber thought a world of McNamee who chased uncharted ground. After all, McNamee had no play-by-play footsteps to follow. No one attempted something like it before him. By 1936, McNamee’s role was reduced and Barber called the World Series for NBC. Sitting behind Red in the NBC booth, McNamee listened to Barber approvingly. At a break, he squeezed Red’s hand and said, “You’ve got it kid.” Red was delighted by the endorsement. Fourteen years later, Red hired Vin Scully, anointing the next broadcast great! Greats come and go. Yet the game lives on!

What’s with baseball? Attendance is down again this year. The trend has become a definite pattern. In 1980, the World Series did a 32.8 rating. Last year it did a 10.7. In 37 years, baseball’s ratings have dropped 67%. Not good! Attendance is also down over 5% this season. Miami is averaging fewer than 10,000 fans per game.

Excellent piece! All of these gentlemen are priceless talents!!