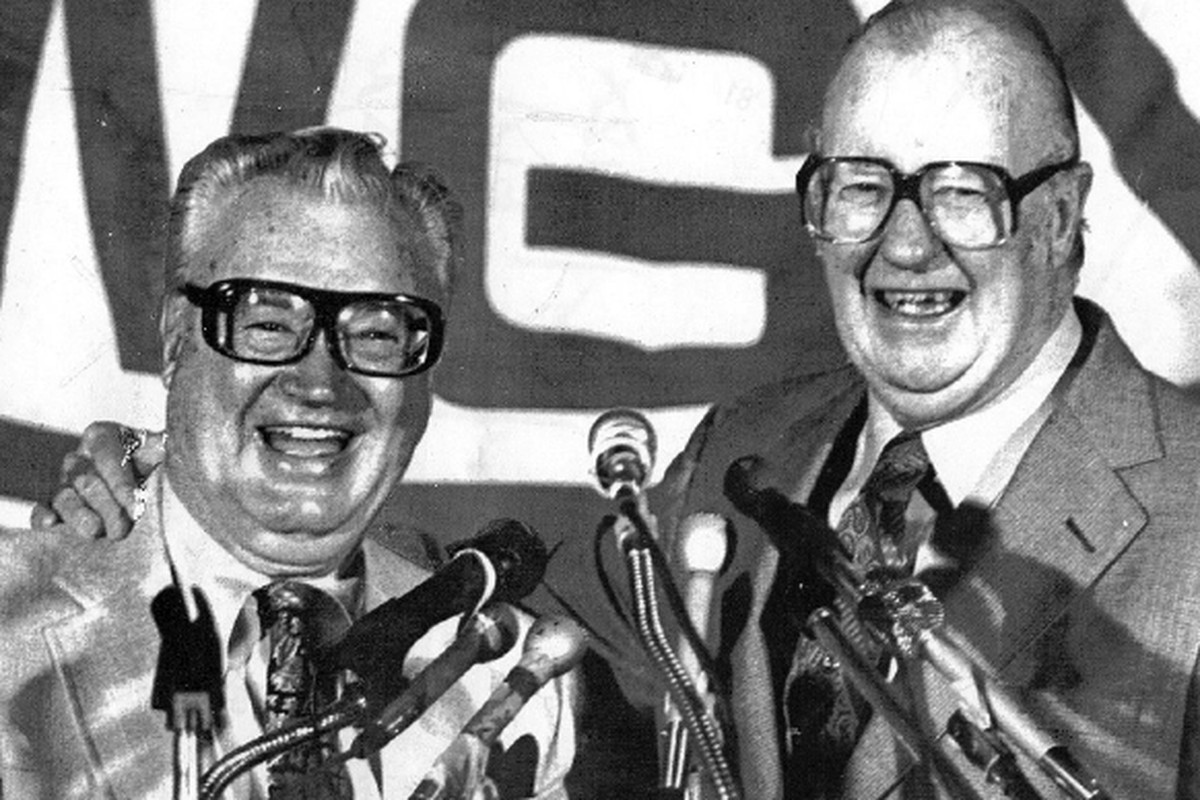 The city’s 12 most popular sports voices ever, those men who’ve presided over the clubs’ microphones beginning when radio went on-air 100 years ago and when television followed some 25 years later.

On the baseball side, the city has spawned four Hall of Famers. Jack Brickhouse, Harry Caray, Bob Elson and Hawk Harrelson all made it to the broadcast corner in Cooperstown.

Criteria: Time in Grade; Visibility of the announcer and his or her popularity, Support for the team by fans in and around Chicago; Play-by-play voices only, no analysts, studio hosts or talk show hosts.

In alphabetical order, here are the top dozen play-by-players.

The Hall of Fame shortstop was on the Cubs radio broadcast team, from1958-’87. He and Vince Lloyd became a popular twosome on WGN Radio for twenty seasons. His radio stint was interrupted by one season of managing the club, 1960, when the Cubs finished 60-94. Having played some college basketball, Lou also spent a couple seasons behind the mic for the newly christened Bulls in 1966.

Brickhouse evolved into the face of Chicago sports on television from 1945-81. He was absolutely dominant and ubiquitous. Through many of his close to four decades on air, he was behind the mic on TV for three teams, the Sox and Cubs and the NBA’s Bulls. On WGN Radio, he was the Voice of the Bears from 1953-77. Jack was beloved in America’s Second City. There’s a plaque in front of the Wrigley Building in the heart of downtown Chicago that honors Brickhouse. In 1946, Jack went to New York and joined Russ Hodges in the Giants’ booth. His stay in the Polo Grounds lasted just one season before returning to Chicago where he was a household name.

Replacing Brickhouse after Jack retired in 1981 was hardly an issue for Harry, given his flamboyance and splashy style. In Chicago, Harry had already built eleven seasons of capital on the city’s south side broadcasting Sox games. He’s stick sixteen years with the Cubs on the north side. At Comiskey Park, he’d sometimes broadcast shirtless from the bleachers. At Wrigley, he’d sing “Take me out to the ballgame” and the fans couldn’t wait. An eponymous restaurant in downtown Chicago opened to great success and during the 80s there were billboards all over town with Caray’s face on it pushing Budweiser.

Jim spent 19 seasons, 1973-92, with the Bulls, first on radio and later as a simulcaster on both radio and television. Durham is considered Chicago’s best basketball broadcaster ever. He was there through Michael Jordan’s first title. At that point, he couldn’t come to terms with the club and its rightsholder. Durham would resurface as the Voice of the Dallas Mavericks. Later, he was also be the lead voice of ESPN’s NBA radio broadcasts.

Known as the ‘The ‘Ol Commander,’ Elson is best remembered for his years calling the White Sox on radio. Other than when he served in the military during World War II,  Elson worked White Sox games and some Cubs from 1930-70. Bob was sports director of WGN and hired Brickhouse there in 1942. The two worked together for six seasons on both Cubs and Sox. Elson was close with MLB commissioner Judge Kenesaw Mountain Landis who too was Chicago based and Elson called several World Series on radio beginning in 1939. The first televised World Series was in 1947. Interestingly, Elson was one of the early hockey broadcasters in Chicago too.

The Blackhawks’ Foley recently announced that he’s retiring but will spend his final season, sharing the schedule with a soon to be assigned new and permanent voice. Pat, a Midwesterner, began with the Hawks in 1981. After the 2006 season, he had a salary dispute with club which forced him to leave for the AHL’s Chicago Wolves for two years. He returned in 2008 and has been there since. He was selected the winner of the Hockey Hall of Fame’s Foster Hewitt Award in 2014.

Different, yes. Loved, by White Sox fans for 33 seasons of his quirky broadcasts. Ken won the 2020 Hall of Fame’s Ford Frick Award. Hawk has an unabashed love for the South Siders. In announcing Harrelson’s award, the HOF said, “He called the game with the passion of a fan and the knowledge of an MLB All-Star.” Ken was the soundtrack of so many seasons, including the franchise’s 2005 World Series championship. Hawk also talked about advice that he got from two broadcast legends, Curt Gowdy and Howard Cosell. They told him that it’s impossible to please everyone.

Hughes has been a Big League baseball broadcaster for 39 seasons, a year with the Twins, 12 with the Brewers teaming with Bob Uecker and now 26 with the Cubbies. Pat’s calls are crisp and his enthusiasm unwavering. He’s had the opportunity that most other broadcasters haven’t, call a Cubs World Series championship. “A little bouncer slowly toward Bryant. He will glove it and throw to Rizzo. It’s in time! And the Chicago Cubs win the World Series! The Cubs come pouring out of the dugout, jumping up and down like a bunch of delirious 10-year-olds. The Cubs have done it! The longest drought in the history of American sports is over, and the celebration begins!”

Larrivee is a New England boy who arrived in Chicago by the way of Kansas City where he called the Chiefs. He got the Bears job in 1985 and held it for 13 seasons including one Super Bowl in 1986. Wayne puts all of his heart and timbre into the games. He produces relentlessly high energy broadcasts. In addition to the Bears, Larrivee did baseball and 17 years of Chicago Bulls’ games on television. He left for the Packers where he’s now been for 25 years.

“Holy mackerel!” Lloyd was with Cubs radio for 33 years beginning in 1954. Most of the seasons the club was horrible. In 1969, under Leo Durocher, Chicago made a run but lost the National League East to the Mets. In his early stint with the Cubs, he was Brickhouse’s sidekick on television. In 1965 when Jack Quinlan died in a car crash in Arizona, Lloyd and Lou Boudreau became a popular radio team for the next score of seasons. Vince also voiced Bulls’ broadcasts and Big Ten football.

For years, Pettit and the Blackhawks were interchangeable. Lloyd was on the call for 14 NHL seasons. He also worked with Brickhouse on TV baseball and got an occasional Bears broadcast when Jack had a conflict. His signature catchphrase, which was even worked into the Blackhawks official fight song was, “Here Come The Hawks…There’s a shot… AND A GOAL!!!” Pettit had a strong baritone and brought a riveting command to the microphone.

The “Swirsk” as he was called early on in his Chicago career is quite popular in the Windy City. In the late 70s and early 80s, Chuck was seen as a happy, go-lucky, enthusiastic sports fan, as a sports personality on WGN. He had the city over a barrel and was as visible then as many play-by-players. Swirsky wanted to call games so he took a job in Detroit where among other things he did Michigan basketball. He then went to Toronto where he was given the Raptors gig, first on radio and later on TV. Swirsky made a victorious return to the Windy City where he was given the rein of the Bulls radio broadcasts. Upbeat and positive as always, The “Swirsk” has been on the Bulls job for 13 seasons. He also does White Sox baseball from time to time.

For a Baker’s Dozen, we’ll acknowledge three pioneer broadcasters who covered mostly baseball during the first decades of radio, beginning in the 1920s. (The three New York baseball teams had agreed to ban radio broadcasts for fear of a loss of attendance. The Yankees, Giants and Dodgers didn’t broadcast their games until 1939.) Baseball on Chicago radio began with the birth of the medium in the 1920s.

This is great. And both Russ Hodges and Jimmy Dudley did some baseball in Chicago, too! That city has been blessed.