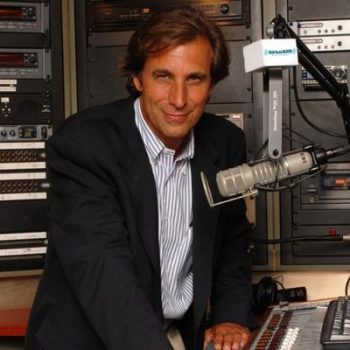 Chris Russo is distinct, speaks his mind, has a big heart and knows his way around the broadcast block. Along with Mike Francesa, the two essentially created WFAN, the city’s first all-sports radio station. It was the 1980s and 1990s and cable was thriving too.

Mel Karmazin who later took over management of SiriusXM recruited Russo and with it a bold press release that gave him his eponymous national brand, Mad-Dog Sports Channel. At that point, Chris had a strong seat at the the table on programming decisions.

I can tell you that he’s the same person today. He hasn’t changed an iota. The world might have, but not Russo’s and not his values.

The same genuine shtick; open and funny. It’s about pragmatism and conviction. You heard him go off. The accent is still  redolent of his Long Island roots. When I called some college basketball broadcasts for Nova Southeastern, his son, Tim, had started as an assistant basketball coach there under Richard Schmidt at Tampa. One day, Chris called and peppered me about every team in the league. All players and queries in depth. Chris himself went to sister Sunshine State Conference school Rollins. Chris’ warmth is palpable and his loyalty unswerving. When I’m in the car, I do listen a lot and he makes me laugh.

Something I found while looking for something else. The New York Post columnist lives in New Jersey and I heard him on a Podcast that focuses on Central New Jersey. He was interviewed by Kevin Williams.

About the length of games, Williams and Mushnick wondered aloud about whether baseball is made and fit for replay. The game existed a century without electronic intervention.

The essence of baseball is the home-run, Phil said. The problem is that players don’t run on a home run or hustle for an extra bag.

The one fellow I think of when it’s Kentucky Derby time is Hammond, a seemingly retired voice. He’ll be 78, tomorrow. He voice is always in fine fettle. Tom’s always calm and collected. Last time we talked, Tom was doing some charity work on behalf of his alma mater, the University of Kentucky in Lexington. On air, Hammond handles the mic with grace and with southern warmth. We miss him. He never got rattled, he was always smooth as silk no matter the sport, college ball, the NBA, the NFL and the Olympics, especially track and field. The 2022 Kentucky Derby was won by Rich-Strike, an 80-1 shot. Race day brought back thoughts of Hammond. Marv Albert once told me that Hammond reminded him of Jim Simpson, Curt Gowdy’s sidekick and later ESPN’s first TV  face.

Good line in the New York Daily News on the performance to date of Wayne Gretzky over Turner’s NHL performance. “We hang on every word the Great One says. Unfortunately, he’s a man of few words.”

Kevin was an NBA and ABA coach and won an ABA title too with the Nets. His dad was a New York cop and Kevin himself did some TV work on CBS, between coaching gigs. Spending time with him when he coached in Miami, I picked up a lot. You can talk with Loughery about just anything from the stock market to politics. One night about ten years ago, I called his home to just say hello. He picked up the phone and started telling me he was watching the NHL playoffs because there was more action than the NBA. Loughery became an NBA coach at age 32 in Philly, taking over for Roy Rubin who jumped from LIU. Answer to a  trivia question, who was Michael Jordan’s first NBA coach? The answer is Kevin Loughery.

For Kevin, coronated with the Western Conference Finals by Turner is a big deal. It’s way overdue. I’m a New York boy and I look around: Sports heads: Sean McManus, CBS; Mark Lazarus, NBC; Jimmy Pitaro, ESPN – all from New York. I’m quite sure that execs Lenny Daniels of Turner is too and Eric Shanks of Fox might be. New York bias, you bet.

Harlan’s vocal qualities are exquisite. He goes only as far as his throat takes him comfortably. He doesn’t allow his timbre to take the audience to screechy and scratchy parts of their eardrums. On national radio he takes listeners to another world, continued success. He had the audacity, and I loved it, to paint and entertaining word picture to maniacs running on the field.

On what was capped with booze and celebration was also filled with violence. The day the Knicks won the NBA title, New York suffered a Hard Hat Riot.

The morning began with great anticipation.

By mid-afternoon, hard-hatters and office workers in the financial district were infuriated, instigated as they were by student protesters. It was the league’s 15th season and the seventh game of the title series. Wilt Chamberlain and Jerry West against Willis Reed and Walt Frazier. You could get a ticket to a Celtics game but not in New York City where hoops were born on the college courts.

The riot started around noon when around 400 construction workers and some 800 office workers attacked about 1,000 demonstrators affiliated with the student-strike efforts of 1970. It was ugly, bloody and nasty. This world has always been inexplicable.

The game was essentially blacked out on television. TV had to delay it. Radio was the only way to follow the Knicks to the championship. It helped make Marv Albert’s career.

That night, the Garden baptized the NBA while the Fun City continued to decay.