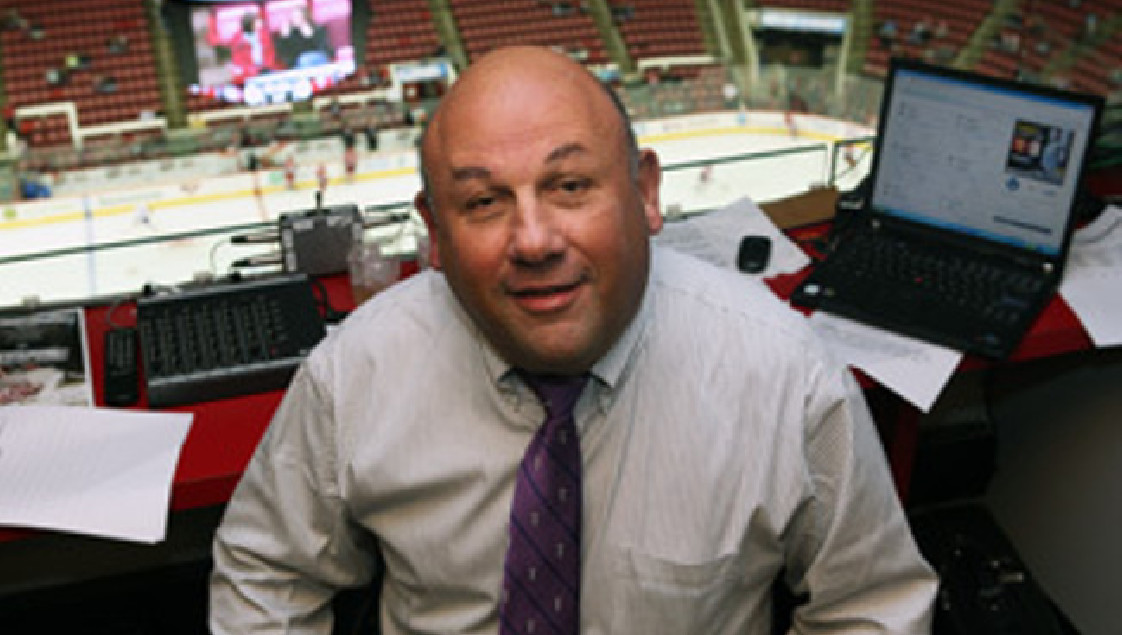 Before the holiday, I had a chance to catch up with Chuck Kaiton, a brilliant radio artist with Picasso’s flair. He called Carolina Hurricanes games on radio for 39 years, beginning in 1979 in Hartford, when the then Whalers joined the  NHL.

The hockey impassioned Kaiton had much to do with growing the recognition of the club when in 1997 it arrived on Tobacco Row; a region where the league had no history. Kaiton used his mic and his throaty touch to seductively sell hockey; hoping to have the Canes embraced in an area where all roads let to basketball.

The team had plunked down its wares like abandoned orphans and the early years in Carolina weren’t easy. Before settling in its permanent home in Raleigh, the club played in Greensboro.

In 1988, some nine years earlier, the NBA’s Hornets launched in Charlotte, a once sleepy southern town that has become less southern over the last score of years. The Queen City has become a vibrant banking center; one that has attracted transplants from across the American landscape. Pedestrian traffic downtown can be brisk and the southern twangs aren’t quite as ubiquitously evident as they were decades ago. Bank of America, for instance, is headquartered in the heart of the city.

The Hornets cashed in on a soft variable; the constituency’s love for round-ball. With four major ACC teams in the state and a healthy appetite for the game, folks in Charlotte and beyond elbowed their way into a 23,000-seat facility every night to watch an NBA expansion team.

Hockey and Raleigh were different. Many there didn’t know the Stanley Cup from a coffee cup. Kaiton had to serve as teacher and unofficial ambassador. The internet hadn’t sprouted yet when the team arrived. Radio was really the extent of social media then; two way talk-shows and personalities. Kaiton played an active role.

From my experience, The Triangle (Raleigh, Durham and Chapel Hill) has more of a mellow feel; redolent of an area fueled by research, technology and major universities. As marketers might say, it’s a different demographic. The Charlotte metro has more characteristics of a big city; it’s also bigger by about half a million people.

Chuck’s play-by-play lingo was somewhat foreign to hockey newcomers. So Kaiton regularly defined his glossary of terms through basketball equivalents; Carolina’s vernacular. He might explain that a man in the crease is in some way similar to a big man in basketball loitering in the lane.

North Carolina is a state where broadcasters like Bob Harris (Duke) and Woody Durham (North Carolina) would annually win statewide honors for sportscasting popularity. It didn’t trouble Kaiton. He went about his business quietly. On radio, the timbre of his presentation was unmistakable. It was reassuring. The rhythm and the fluid word pictures he painted were music to the ears of these new NHL fans.

In 2006, there was little selling left to do; the franchise had won the Stanley Cup. Locals talked hockey, an implausible thought a decade earlier. And so it went for years, until fan malaise set in when the club’s ice performance began to fail.

One of Kaiton’s accomplishments that brings him joy to this day is that one year he finally won the statewide sportscasting honor.  To think that in a place like North Carolina where Mike Krzyzewski and Roy Williams are sometimes more powerful than the governor, the honor went to a hockey guy. And he did so from his Raleigh pulpit where three major college basketball programs sit in the shadow of the Canes’ arena; UNC, State and Duke.

Unfortunately, before the current season, the great voice’s palette, brush and canvas were pulled from his grasp. The relatively new team owner Thomas Dundon turned radio’s presentation from steak into chopped liver; muting a perfectly descriptive broadcast. Ownership took the audio of a talking-head captioning pictures on TV and called it radio too. Dundon’s simulcast silenced a vocal artist in broad daylight.

See, Dundon followed the NHL in Dallas where he lived before buying the Canes.  There, the NHL’s Stars also produce simulcasts, an anathema to a radio purist. The NHL apparently doesn’t discourage simulcasts. The NBA does. The decision to simulcast in Raleigh saved Dundon a salary, travel costs and production. Music to his pocketbook, dissonance to the listener.

NHL radio might be dying a slow death, a thousand cuts by sharp knives; new technology, ubiquitous Smartphones and scores anytime anywhere; no radio needed. Is the medium turning into a hockey dinosaur? Not everywhere.

There are clubs that do value their radio broadcasts so there’s still room for this great artist Kaiton. You can’t keep a brush away from a Picasso very long.

Chuck keeps busy these days doing podcasts. He still follows the NHL with equal zeal. Before the holiday, he shared his observations on the season as it gets close to the midway point of the schedule. Players, records, strengths and weaknesses; they flowed from his tongue like he was still doing play-by-play.

Let’s talk Eastern Conference. (as of 12.24.18). The Tampa Bay Lightning have the best record in the NHL. How good are they?

They’re the class of the East, if not the league. They’re undefeated in the last ten (9-0-1). They have it all; they’re 21 games over.500! Their goal differential is an amazing +48. The Lightning’s arsenal of Nikita Kucherov, Brayden Point and Steven Stamkos  is strong. They have a solid defensive team and good goaltending led by Andrei Vasilevskiy. Louis Domingue backs up Andrei when he’s unavailable.  They have a very well-rounded hockey club. (Chuck was always known for perfect pronunciations of what are to most tongue-twisting names. )

Toronto is 6 points behind and they don’t take a back seat to anyone; with players like Auston Matthews, William Nylander, John Tavares and Kesperi Kapanen. The Leafs are solid defensively too. Goalie Frederik Andersen is a staple.  Then you have Buffalo, a surprise so far this season. Captain Jack Eichel is a leader and has synergy with Jeff Skinner, Sam Reinhart and others. Rasmus Ristolainen anchors the defense and its goaltending is excellent, led by Carter Hutton. The Sabres are for real; they’re currently the 3d seed. Buffalo won’t slip.

How about the Metro Division?

No hangover for the champion Caps. They started inconsistently but they’re getting it together. They’ve won 7 of 10. They’re getting good goaltending; between Braden Holtby and Pheonix Copley (yes, from North Pole, Alaska.) Offensively they’re loaded; Alex Ovechkin, Nicklas Backstrom and T.J. Oshie.

Columbus is playing a better team-game, No superstars. It’s all about goalie Sergei Bobrovsky. They’ve won four straight. Pittsburgh is undermanned and surprisingly, it’s not only about Sidney Crosby or Evgeni Malkin, who actually hasn’t played that well.  They’re third in the Metro. But still Cosby stirs the drink. Credit Casey DeSmith in goal. He’s more than a capable backup for Matt Murray. Coach Mike Sullivan has the Pens playing well. They’re much like Columbus in the team-game focus.  Winger Bryan Rust has contributed nicely too.

Boston’s hurting. It’ll have to shore up its goaltending, that of Jaroslav Halak and Tuuka Rask or the Bruins won’t make the playoffs. At this point, Montreal has a 3 point cushion for the wildcard. They’re made up of hard-working guys playing for Claude Julien and his staff.

In January there are bye-weeks and the all-star break. A disjointed schedule. Tough time to build traction.

Let’s go West, Chuck and start with the team that has the most points in the conference, the Winnipeg Jets.

Mark Scheifele is a cerebral player. The Jets are 14 games over .500. They’re an offensive dynamo, with Blake Wheeler and Nikolaj Ehlers. Their support cast is hard working. Goalie Connor Hellebuyck is not having a great year but solid enough. The defense is strong too.

What’s your assessment of other pursuers in the Central?

Peter Laviolette’s Nashville club has had lots of injuries so I tip my hat to them. Still, the Predators have lost three straight going into Christmas. Filip Forsberg (played 26 of 37) has been out as has P.K. Subban (played 18 of 37). They’ve had goaltending issues too.

Colorado, coached by Jared Bednar, is a one-line team; Nathan MacKinnon, Mikko Rantanen and Gabriel Landeskog and the trio will have to carry the club. It’s likely their best line in many years. They produce half the Avalanche’s goals. They’re 19-12-6 but I see them slipping in the second half of the season.

How about in the Pacific?

Calgary is the surprise team under new coach Bill Peters. They have a prolific line that separates itself, Elias Lindholm, Johnny Gaudreau and Sean Monahan. They’re solid defensively but goaltending has been iffy. Czech netminder David Rittich has come on the scene and outplayed Mike Smith. They’re strong offensively with the feisty Matthew Tkachuk. There’s grit and skill.

Peter DeBoer’s San Jose team has been inconsistent. The Sharks won five straight and then lost a couple back to back at home. I don’t think they’ll miss the playoffs but they’ll need help in net with Martin Jones and Aaron Dell.

Vegas, like Washington, is not suffering a hangover after last year’s unforeseen run to the Stanley Cup finals, as a first year franchise in the NHL. But it’s a young club and Coach Gerard Gallant counts big on goalie, Marc-Andre Fleury. Anaheim is another team rattled by injuries. Coach Randy Carlyle has done a good job. It’s a big team and tough to play against. They’ve lost three straight going into the holiday but I think they can still make the playoffs.

Edmonton is off in a fresh direction under new coach Ken Hitchcock. They’re fostering a defensive discipline there.

At this point in the West, a look at the standings will show you that there’s no playoff separation like in the East. You can say that Vancouver is somewhat of a surprise, just one game under .500. Many thought that the Canucks would be somewhere nearer the bottom. Minnesota has been a disappointment. More was expected from high money players, Zach Parise and Ryan Suter. The Wild’s streak of making the playoffs might be in jeopardy. Arizona always seems to be rebuilding with young players but go figure, they have more points than Chicago and St. Louis.

The Kings who won the Cup not too long ago are struggling to make the playoffs. They’re an older team and they’ll need a good second half.