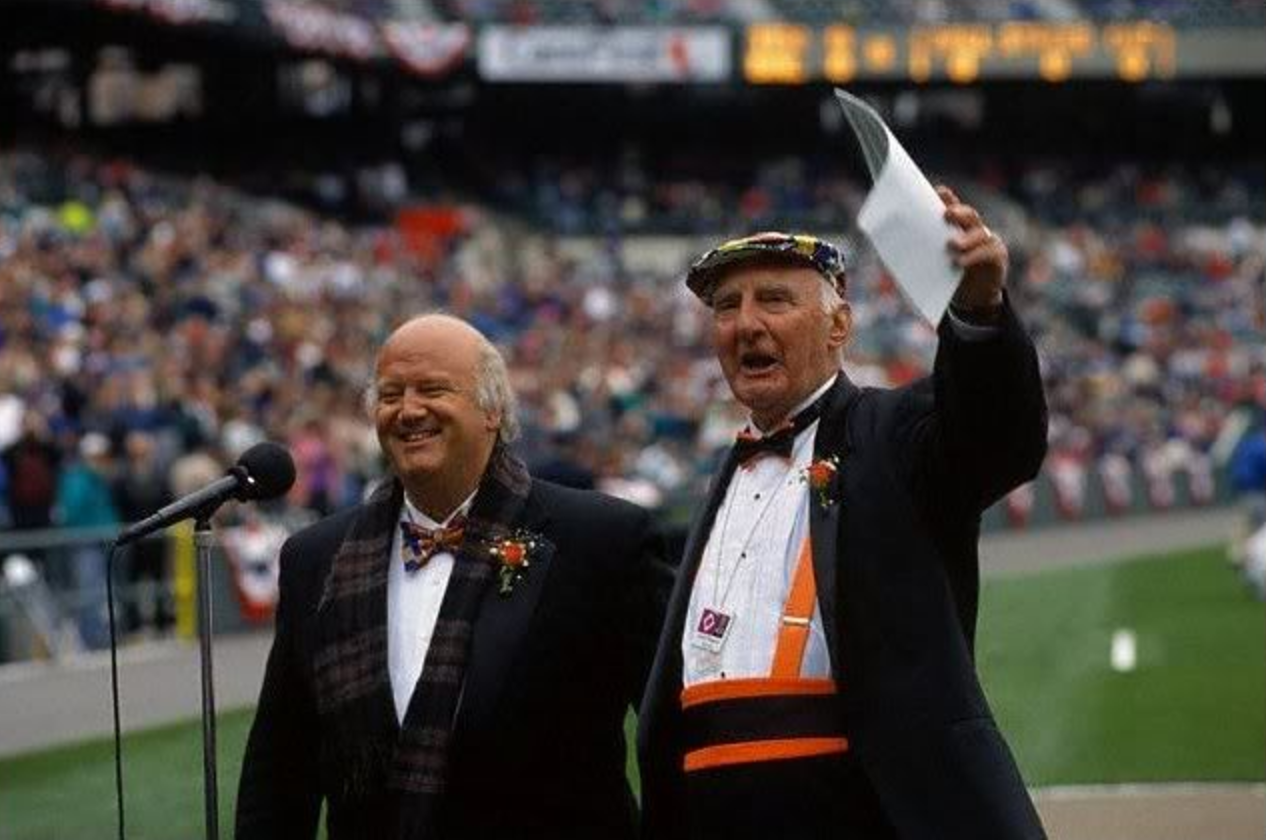 In Brooklyn where I grew up, the nighttime signal of Baltimore’s WBAL Radio came in clearly. WBAL meant Orioles baseball and Chuck Thompson. Never ever gruff, nothing contrived, just a soothing, warm, rich baritone. His partner, Bill O’Donnell, wasn’t too bad himself. He too was dulcet toned.

They both sounded like they didn’t have a care in the world. Chuck and Bill were just smitten by baseball, and for those listening to them, the feeling was contagious. Each broadcaster wore a warm smile on the radio. You can hear that smile in their voices. Their personalities were equally as cheery. Each gentlemanly.

Thompson would later be known for his trademark hats, from snazzy caps to fedoras. As the story goes, Jerry Hoffberger, who headed up the National Brewing Company and later owned the Orioles, saw Thompson standing bareheaded while doing a football game on television. So Hoffberger sent Chuck a hat and suggested to him in no uncertain words that he keep it on his head while on-air. Thompson said, “He was paying the bills, so from then on, I wore a lid on my bald head when I was on camera.”

Raised in both Pennsylvania and New England, Thompson got into radio in an odd way in 1939. A young lady in the neighborhood, Jean Guilden, heard him sing in a band and was impressed by the resonance of his voice. She dared him to audition at the local radio station in Reading. Chuck applied and was hired at $14.20 a week!

Like many successful American sportscasters, Thompson served in the military during the war and partook in the Battle of Bulge on the Western Front of the European Theater. Think Jack Buck, Jack Whitaker, Howard Cosell, Johnny Most, Marty Glickman, Jerry Coleman, Merle Harmon, Chick Hearn, Lindsey Nelson, Jim McKay, Phil Rizzuto, Ray Scott and many others who were vets of World War II.

Thompson had a number of stints with the Orioles during a period when sponsors influenced the selection of announcers. The Orioles were an International League team in the Minors when Thompson started with them in 1949 and when Gunther Brewing sponsored the broadcasts.

But when the St. Louis Browns became the Orioles in 1954 and Baltimore became a big-league town, National Brewing became the sponsor and Gunther was out. Later that year, Thompson met with National’s Hoffberger and he was hired the following season. “It was the start of a great 35 year relationship with Jerry,” Thompson said.

After the 1956 season, National lost the O’s rights but had the Senators. So Thompson moved to DC and worked there with Bob Wolff for four seasons. Everything would eventually come together in Baltimore when Thompson rejoined the club’s broadcast team for the 1962 season. He would remain with the team fulltime through the 80s and then backed up Jon Miller part-time in the 1990s.

Thompson had a magnificent quality that few announcers have. He could speak softly and slowly, regaling his audience with story after story. Each word, beginning with the very name Orioles, flowed from his lips mellifluously. It seemed like he was fondling every syllable. When he would do a rapid-fire football game, Thompson could go a mile a minute while maintaining a comfortable narrow range in his tone. Invariably, every letter of every word out of his mouth was annunciated clearly.

Thompson is synonymous with those wonderful O’s team of the 60s and 70s. “Hit hard, down the third base line, snared by Brooks near the bag, he throws to Powell at first and the Yankees are down in the third…one, two, three!” The pausing and intonations were right out of a speech class.

The late and gifted SI writer Frank DeFord who grew up in Baltimore said, “Chuck was as much a sound of Baltimore’s summers as the bells of the Good Humor man.” DeFord said that television announcers weren’t the same. He likened TV voices to flights attendants, “buckling us up for the ride.”

Thompson who did both TV and radio had signature lines that followed significant accomplishments by the O’s.  “Ain’t the beer cold!,” he would exult. For that matter, it’s the title of his autobiography. But Thompson stopped using the phrase when Christian listeners told him that they were unhappy that he embedded a beer promotion within the fabric of the play-by-play.

Thompson also used another unusual line that he picked up from a golfing buddy who wouldn’t swear. Instead of cussing, this fellow, would spew, “Go to war, Ms. Agnes,” after missing a gimmie on one of the greens. So when the competition on the field was hot, Chuck invoked the line. But he dropped it in the 70s when the Vietnam War lingered.

Before moving to Indianapolis in 1984, the Colts had a disjointed history in Baltimore. The first Colts team was part of the old All-American Football Conference, a second team was part of the NFL for just one season. The third iteration arrived in Baltimore in 1953. You get the picture. The NFL wasn’t very stable then. Thompson had a long history with the franchise. For many years in the 1950s and 60s through the club’s final 12 years in Baltimore, Thompson was the unmistakable Voice of the Colts and absolutely adored by the team’s fans.

In the 50s and into the 60s, Thompson called the NFL on network television, focusing on Colts games. When I did a story on the historic 1958 championship game, I talked with former Colts executive, Ernie Accorsi who told me, “If you think Chuck Thompson was a great baseball announcer, his football was even better.”

The NBC TV announcers for the 1958 title game, represented the participating teams, Chuck Thompson who called the Colts and Chris Schenkel, the television announcer for the Giants. Both had voices for which to die, that good! According to the late historian Ted Patterson, Schenkel and Thompson reportedly flipped a coin to determine who would call which half. Schenkel won the toss and selected the second half. It resulted in Thompson getting the first half and the historic overtime, the first in NFL history. 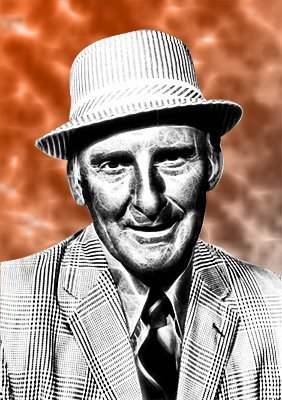 Author Ed Gruver in The American Football League: A Year-by-Year History, 1960–1969 spelled out Thompson’s overtime call: “Here come the Colts to the line of scrimmage. Unitas over the center. The ball is snapped, given to Ameche. He is over for a touchdown! The Colts are the world champions.”

Gruver writes that Thompson added detail to his headline call: “Alan ‘the horse’ Ameche, lowering his helmet and galloping through the gathering darkness and the New York Giants defense and into the end zone.”

When the Colts advanced to Super Bowl III in 1969 and proceeded to lose to the Jets, it was Chuck who called it locally on Baltimore radio.

In the early 1980s, I represented the Colts broadcasts for advertising sales nationally. It was a cold, windswept Sunday at old Memorial Stadium when I went down to watch a game in the booth. The stadium was half empty. Prior to kickoff, Chuck turned to a few of us who were guests in the broadcast booth and apologized because he was about to open the window to get a feel for the elements while calling the play-by-play. Yes, the booth turned into a frigid air mass. Yet, we sat there admiring Thompson’s broadcast.

Chuck worked on the NBC-TV Baseball Game of the Week in 1959 and 1960. He was also at the mic on the NBC Radio Network during the dramatic game #7 of the 1960 World Series. “I called Mazeroski’s homer on radio and, for some unknown reason, gave the final score as 10-0 instead of 10-9,” Thompson recalled later. “Not only that, I told the listening audience that the homer had been hit off Art Ditmar instead of Ralph Terry.” It was one of the most exciting moments he had ever described over the air, but for Thompson, “easily the most embarrassing moment of my career behind the microphone.”

But he didn’t try to undo the mistake. “When the Pirates’ broadcaster Bob Prince called me during the off-season and asked if I’d like to redo the ending, for a souvenir record the Pirates were going to produce, I declined. I figured it had gone on the air that way, so it would not be honest to change it.” What followed in the 80s was an Anheuser Busch ad that included Thompson’s inaccurate call. Ditmar then sued the brewery.

In 1993, Thompson won the Ford Frick Award given by the Baseball Hall of Fame. At his acceptance speech, he shared a baseball story. He talked about how one night, a group of fellows including Casey Stengel had a few nightcaps in the Yankees hotel bar. Afterward, Casey and a few of them hopped on to the elevator to get back to their rooms. In those days, elevators weren’t equipped with push-buttons representing each floor. Each cab was run manually by an elevator operator who took guests to their desired destination using a crank to start and stop the elevator.

When Casey entered the elevator, he handed the operator a fresh baseball and told him that he wanted to give it to an underprivileged boy, autographed by as many players as he could. So Stengel asked the operator to have each of the players who’ll walk into the elevator to autograph the ball. When Casey arrived for breakfast the next morning, the elevator man had just finished his overnight shift. He greeted Casey and gave him the signed ball. Casey looked at it and saw four signatures.

Stengel wrote the names down on a napkin and proceeded to fine each one of them $50 for breaking curfew. The Ol’ Professor!

Baseball on radio and TV, it’s about stories. Thompson understood.

I have Pat Hughes’s great CD tribute to him, and it’s letter-perfect. I also have his autobiography, and it’s a sweet book. Ken Levine, who spent a year with the Orioles, talks about him with great affection in his book.

He may have had the greatest set of pipes of any sports announcer I’ve ever heard. What a magnificent voice!